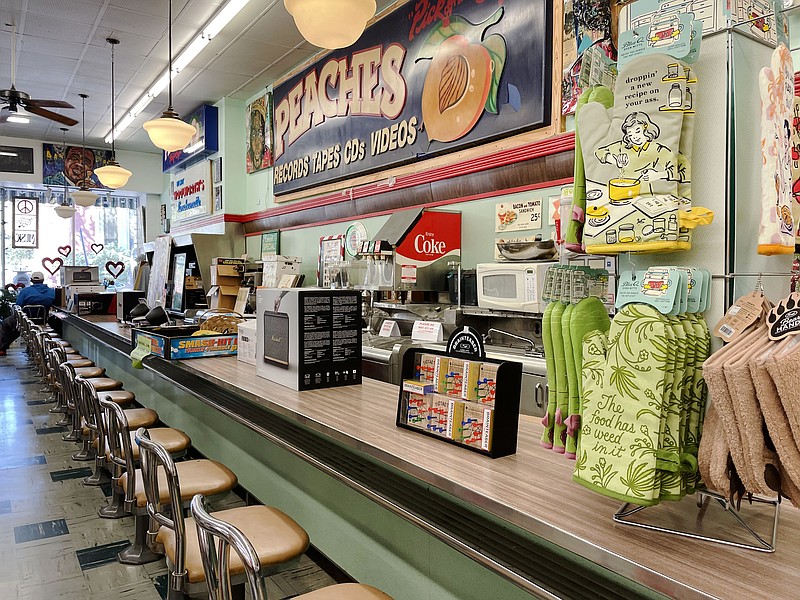 Peaches, a record store in New Orleans, occupies a Woolworth’s department store where sit-ins took place in the 1960s. Visitors can see the original counter and sign from that era. (The Washington Post/Andrea Sachs)

On Feb. 1, the start of Black History Month, Leona Tate stood near the doorway she first entered more than 60 years ago as one of three Black students to integrate the McDonogh 19 Elementary School in New Orleans.

Back then, the 6-year-old in the dainty dress and hair ribbon was flanked by federal marshals. This morning, she was surrounded by admirers and other activists, plus a life-size figure draped in billowy fabric. At the go signal, Tate grabbed a handful of cloth and pulled, revealing a Louisiana Civil Rights Trail marker — another stop on the state's long road to racial equality.

"Today is special, because [the desegregation of McDonogh 19] is getting the recognition it should have gotten years ago," Tate said after the ceremony. "We were introduced to racism here, even though we didn't understand what it was at 6 years old. I want racism to end here."

In February 2021 the state debuted the Louisiana Civil Rights Trail, a mix of online content, such as archival photos and video, and physical sites integral to the movement that engulfed the South in the 1950s and '60s. Three months later, the first marker — a 6-foot-tall-ish steel silhouette of a protester holding an interpretive plaque — was installed at Dooky Chase's Restaurant in New Orleans. Designations at two spots in Baton Rouge (A.Z. Young Park and the Old State Capitol) and one in Shreveport (Little Union Baptist Church) followed. The day after the McDonogh 19 unveiling, the Louisiana Maneuvers and Military Museum in Pineville received its sign. The Robert "Bob" Hicks House in Bogalusa is next in line. One of the country's best-known desegregated schools, the William Frantz Elementary School, where Ruby Bridges enrolled as the first Black student, is slated to receive a marker this year.

Lt. Gov. Billy Nungesser spearheaded the project with the Louisiana Tourism Office in 2019. Over two years, the trail's organizers traveled about 3,000 miles around the state, collecting stories and pinpointing landmarks. The team initially flagged 14 sites for markers. At other locations, visitors will be able to download audio and hear about the seminal events that took place there, such as lunch-counter sit-ins and public bus boycotts. In addition, Louisiana is one of 15 states, along with Washington, on the U.S. Civil Rights Trail. This month, the national route added nine Bayou State destinations to its compendium of more than 130 attractions. Several — the University of Louisiana at Lafayette and Canal Street in New Orleans, for instance — do not yet have stars on the state's trail map.

"Louisiana is definitely a state with great sites that the local leadership created on its own, without Martin Luther King," said Lee Sentell, director of the Alabama Tourism Department and author of the new publication "The Official United States Civil Rights Trail," which includes a Louisiana chapter.

I visited the four markers in New Orleans and Baton Rouge, as well as several other spots I gleaned from the U.S. trail's website (Frantz school), the National Park Service (165-year timeline at Jean Lafitte's French Quarter Visitors Center) and the owner of my Airbnb in New Orleans, who tipped me off to a Woolworth's luncheonette counter inside Peaches, a record store on Magazine Street. The former department store's windows face a police precinct. Looking through the glass, I could easily imagine what happened when civil rights activists took a seat at the counter.

What happened here: On Nov. 14, 1960, six years after the Supreme Court ruled "separate but equal" unconstitutional in Brown v. Board of Education, the McDonogh Three became the first Black students to attend the previously all-white school in the Lower Ninth Ward. Federal marshals shielded Tate, Gail Etienne and Tessie Prevost from an angry crowd protesting integration. White parents withdrew their children, leaving the girls as the sole students for the entire year. For their safety, they ate lunch under a stairwell, spent recess indoors and were taught in a classroom with papered-over windows.

While you're there: Visit the Tate, Etienne and Prevost (TEP) Center, a new mixed-use space that includes an interpretive exhibit dedicated to civil rights efforts and actors in New Orleans. Tate expected to open the educational venue this month in the lower levels of the former school, which, in an ironic wink, her nonprofit owns. "I want visitors to take those same steps, the way we came in and how we moved around in here, and hopefully they'll feel what we felt," she said. "I want this place to offer some sort of racial healing." If you're lucky, you can meet Tate, whose office will be in the thick of the displays. 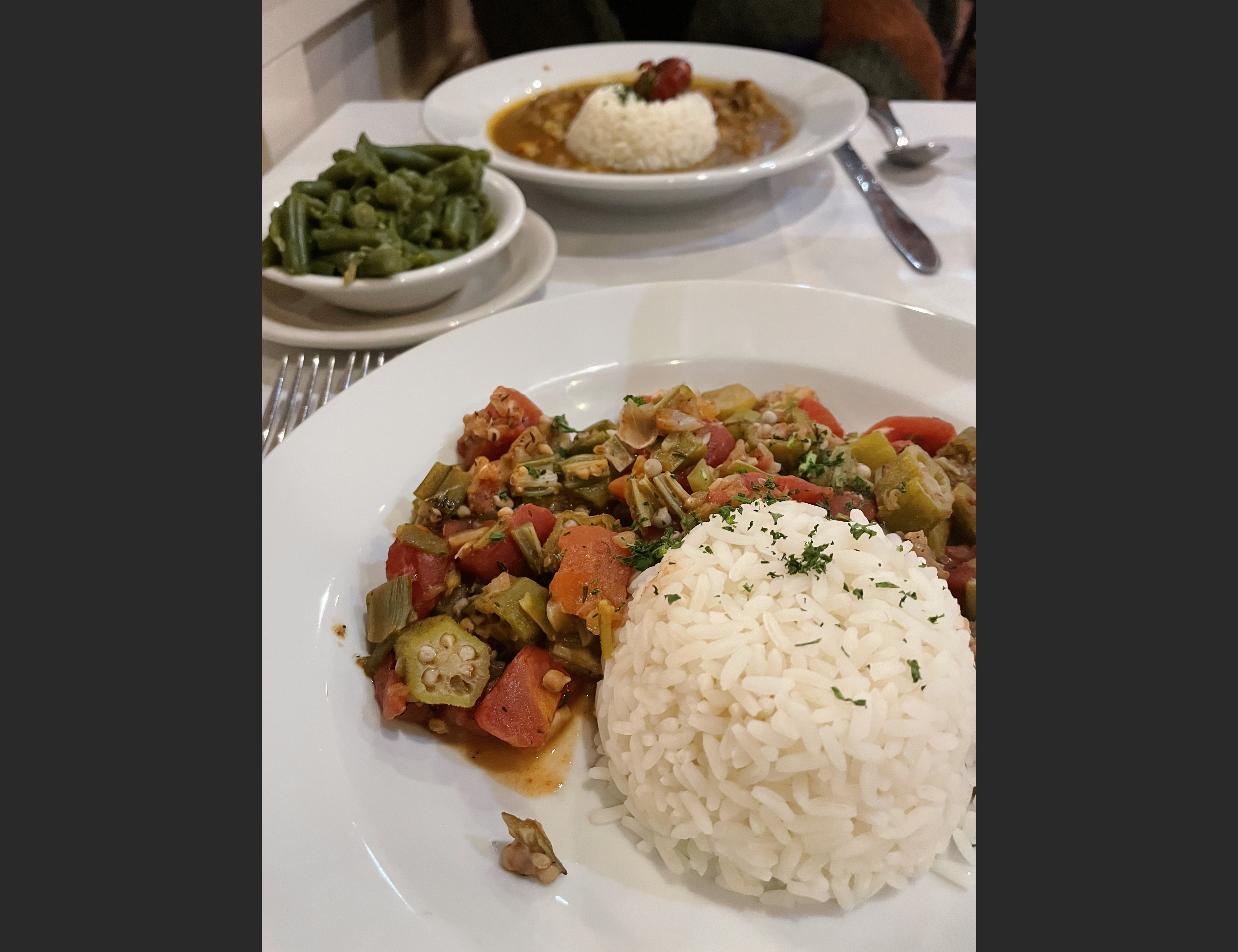 What happened here: Civil rights leaders, lawyers, activists and Freedom Riders gathered in the second-floor dining room to strategize. Participants including Thurgood Marshall, the Rev. A.L. Davis, Oretha Castle Haley and, on occasion, the Rev. Martin Luther King Jr. planned sit-ins, boycotts and protests over meals prepared by Leah Chase, the "Queen of Creole Cuisine." "My mother always said we changed the course of America with our gumbo," Stella Chase Reese said of the executive chef who owned the restaurant with her husband, Dooky.

While you're there: Eat lunch (Tuesday-Friday) or dinner (Friday and Saturday). Reese recommends getting the gumbo, the signature dish, or sampling any number of Creole or Southern classics, such as crawfish etouffee, shrimp Creole and fried chicken. In addition to award-winning food, the Chases amassed one of the country's finest collections of Black art. Roughly 80 paintings and sculptures fill the bar and multiple dining rooms, with works by such celebrated artists as Jacob Lawrence, Elizabeth Catlett and Chase Kamata, the granddaughter of Leah and Dooky. During your lap around the 81-year-old establishment, check out photographs of famous diners (Barack Obama ate here); Disney illustrations of Tiana, the "Princess and the Frog" character modeled after Leah; and mementos including a condolence letter from former president George W. Bush to the Chases after Leah's death in 2019.

What happened here: On Aug. 10, 1967, activists A.Z. Young, Robert Hicks and Gayle Jenkins set off on a 105-mile march from Bogalusa to Baton Rouge, where Young would present a number of racial injustices to the governor at the steps of the Capitol. The journey took 10 days and ballooned from 25 to 600 participants. About 2,200 members of the National Guard and police force protected the demonstrators from enraged opponents to their cause. The march resulted in improved employment and voting practices for Black citizens.

While you're there: Traipse through 27 acres of manicured grounds at the Louisiana Capitol, the country's tallest state capitol. The man in the center of the regal gardens is Huey Long, the U.S. senator who was assassinated inside the capitol that he built during his term as governor (1928-1932). A 12-foot-tall bronze statue of the "Kingfish" marks his final resting place. Inside the Capitol, pick up a brochure or schedule a guided tour of the 450-foot-tall Art Deco building. From the 27th-floor observation deck, take in the sweeping views of downtown Baton Rouge, the Mississippi River and, of nearly equal stature, Louisiana State University's Tiger Stadium. At the Louisiana House Dining Hall, ask a legislator to pass the salt and pepper. The eatery is closed but was set to reopen this month, when the legislative session convenes.

◼️ The site: Outside the Old State Capitol, Baton Rouge

What happened here: On June 19, 1953, scores of Black passengers, who made up about 80% of ridership, boycotted the city's buses to protest discriminatory policies. Hundreds of Black people with cars volunteered to drive the demonstrators to and from work. The boycott ended four days later, when the bus company and city officials hammered out a (controversial) compromise with the Rev. T.J. Jemison. In Alabama, King and the Montgomery Improvement Association adopted Baton Rouge's car-share arrangement in their bus boycott that started in December 1955.

While you're there: Pop into the Old State Capitol, a free museum. On the first floor, learn about the Plessy v. Ferguson case, which upheld the "separate but equal" doctrine. A framed document signed by Gov. John Bel Edwards on Jan. 5 pardons Homer A. Plessy for violating the Separate Car Act of 1890. In the same room, a short film touches on civil rights events in Baton Rouge, including the courageous act of a Black woman named Pearl, who sat in the white section of a bus and asked other passengers to join her and hold hands in solidarity.