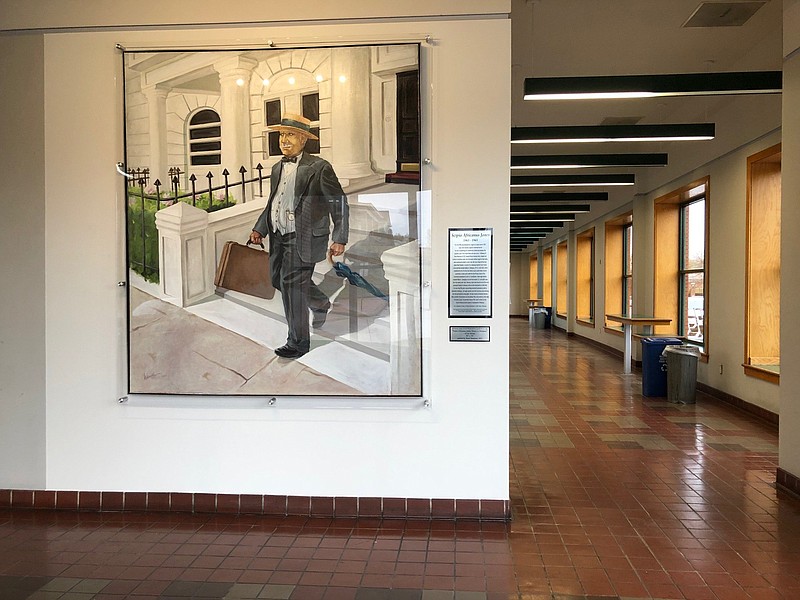 Walk through the door of the Scipio A. Jones Post Office at 1700 Main St. in Little Rock and there he is, a life-size version of the building's namesake.

"Scipio Africanus Jones; Moore vs. Dempsey," a 2021 oil painting by Little Rock native Wade Hampton, hangs in pride of place at the post office and serves as a tribute to the legendary Little Rock lawyer.

In the portrait, Jones, a look of satisfaction on his face, is leaving a courthouse and stepping onto a sidewalk into the afternoon sun. He is sharply dressed in a gray suit, bow tie, straw hat and striped vest. He has a little bit of a pot belly. In his right hand is a briefcase, in his left an umbrella.

He looks like a man who just earned a victory in court and is ready for whatever comes next.

The portrait, which was unveiled during a ceremony Feb. 24, is the result of an effort that involved not only finding an artist up to the task and raising money from private sources to have the work completed, but also — dramatic pause — an act of Congress.

Jones was born into slavery in 1863 in Dallas County. He attended Walden Seminary, now Philander Smith College, in Little Rock and earned a bachelor's degree in 1885 from Bethel Institute, which is now Shorter College, in North Little Rock. He taught public school for four years and studied law on his own, passing the bar on June 15, 1889.

He often represented indigent citizens and fought abuse and injustice in Arkansas' penal system, according to the online Encyclopedia of Arkansas. He is best known for his defense of 12 Black men sentenced to death in the wake of the Elaine Massacre, an outbreak of deadly racial violence that began Sept. 30, 1919, outside a church at Hoop Spur in south Phillips County and that some historians believe resulted in the deaths of hundreds of Black people. Five white people were killed.

Jones was part of a group fighting the sentences and worked with the firm of former Arkansas attorney general George C. Murphy to defend the 12, whose cases were split into the six Moore defendants and six Ware defendants. During the trials, Murphy, who was hired by the NAACP, became ill, and Jones was principal counsel.

Jones' appeals would eventually lead to the men being freed and the landmark 1923 U.S. Supreme Court's 6-2 decision Moore v. Dempsey, in which the court ruled that the defendants' trials deprived them of due process guaranteed by the 14th Amendment. The ruling allows for federal courts to hear and examine evidence in state criminal cases to ensure that defendants' constitutional rights are protected.

John P. Gill is senior counsel at the Gill Ragon Owen law firm in Little Rock and a longtime admirer of Jones.

"He is certainly one of America's greatest lawyers," Gill says. "Look at what he overcame just to become an attorney. He was born into slavery, he couldn't attend the University of Arkansas law school because of his race."

Representing the 12 Elaine defendants was another example of Jones' ability to stare down seemingly insurmountable odds, Gill says.

"He undertook representing these 12 men who had already been convicted. Any lawyer that takes a case that has been lost knows it's difficult, but Scipio Jones wasn't the type of man to back away from risk and defending his clients. To me, that is the hallmark of a great lawyer. He'd walk through the jaws of hell to protect his client."

Gill is the author of the 2002 book "Post Masters: Arkansas Post Office Art in the New Deal" and is well aware of how publicly displayed art can help tell the story of a place. He was part of the effort behind the installation of the 2017 Michael Warrick sculpture "Straight Lines on a Round World" outside the Statehouse Convention Center in downtown Little Rock to commemorate the 200th anniversary of the Louisiana Purchase Survey.

A few years ago, Gill decided to visit the Scipio A. Jones Post Office to see if there was anything inside honoring the man whose name was on the building.

"You'd walk in there and have no idea who he was," Gill says. "With that in mind, I set out to get a portrait put up."

In 2017, he reached out to Garbo Hearne, owner of Hearne Fine Art in Little Rock, for help in finding an Arkansas artist to paint Jones' portrait. They settled on Hampton.

"It wasn't easy because of the size of the art," Gill says. "When you tackle art that size, it takes something special, and Garbo was extraordinarily insightful to get Wade Hampton."

Hearne, whose gallery focuses on Black artists including Kevin Cole, Dean Mitchell, Marjorie Williams-Smith and others, has represented Hampton since just after he graduated from Little Rock's Parkview Arts Science Magnet High School, when someone brought in a work of his to be framed.

"In a sense, the portrait is a story," she says of Hampton's depiction of Jones. "We talked through the process, and what [Gill] wanted was the essence of Scipio Jones' work shown in a portrait."

One of the major requirements Gill had for the portrait was that it show Jones leaving a courthouse.

Hampton, says Hearne, was able to research Jones and take the artistic license needed to tell the lawyer's story in oil paint on canvas.

"There aren't a lot of portraits or pictures of Jones, so there was intense research done by Wade after he made his study sketch and when the project actually came to fruition."

Hampton attended the Kansas City Art Institute, earned his master's of fine arts in illustration from the School of Visual Arts in New York and is influenced by masters like Diego Velazquez, Rembrandt, Edgar Degas and John Singer Sargent. His paintings have been featured in the Arkansas Museum of Fine Arts annual Delta Exhibition, and he illustrated Maria Hoskins' book "Down Home in Arkansas: A Family Reunion Story."

He splits his time between New York, Las Vegas, Los Angeles and Arkansas. He's also a dancer specializing in salsa who has performed with Cirque du Soleil. He was in Fayetteville teaching dance classes when we caught up with him for a phone interview earlier this month.

Hampton says he wasn't aware of Jones' legacy before getting the commission. In his research, he found that Jones "was a very educated, determined man. His mother named him after a Roman general. I also did an interview with a lady in Mayflower who physically met Scipio Jones."

In his composition, Hampton presents Jones just to the right of center. For reference, he used what few images he could find of Jones as well as photos he took of a model dressed in a suit and hat and holding a briefcase and umbrella. He also had the model step off a raised surface to simulate Jones' movement in the painting.

Hampton says he wanted to show Jones as if he were walking out of the courthouse right after winning Moore v. Dempsey.

"I did my best through my anatomy training and use of light and color, combined with interviews and research on the Elaine Massacre and Scipio Jones, to help me portray him," he says. "It was like re-creating someone. It's a bit of a responsibility, to say the least."

There are subtle elements of symbolism in the painting, Hampton notes. Jones' tight grip on his heavy briefcase indicates there is more work that needs to be done; the umbrella is a sign of protection, and his pocketwatch shows it's 3 p.m., an hour indicating the workday is almost over and one that, in Christian terms, is associated with the time of Christ's death.

The artist says Jones' straw hat came at the suggestion of Colin Thompson of the Central Arkansas Library System, who helped throughout the project.

The perspective of the painting also takes into account its home.

"You walk into the post office and you can go right to the P.O. boxes or go left to the desk area," Hampton says. "The sidewalk in the painting almost feels like there are three walkways there."

To the side of the portrait is a helpful plaque with information about Jones.

Gill says he is pleased with the results.

"If you look at the portrait, this determination Scipio Jones has, his hellbent-for-leather [approach] to get justice is depicted pretty well in the art. The way Wade did it shows a lot about Scipio Jones and his approach to protecting his clients."

One simply can't just go hanging paintings willy-nilly in a U.S. post office, however. Long before Hampton finished his work, Republican U.S. Rep. French Hill of Little Rock was steering legislation through Congress to have the portrait placed.

Hill was already interested in details about the Elaine Massacre, and in 2018 worked with University of Arkansas Little Rock history professor Brian Mitchell to obtain a Purple Heart for the family of Leroy Johnston, a World War I veteran who was killed in the massacre with his three brothers just months after coming home from the war.

Hill was happily onboard when Gill reached out about the legislation needed for Jones' portrait.

"Scipio Jones changed the course of history and the course of U.S. Supreme Court precedent for the betterment of every other civil rights act that took place after that," Hill says. "He was one of the most important attorneys of the 20th century. His leadership led to national success in protecting individual rights."

Gill adds his appreciation for help from Thompson of CALS and JoAnn Cook, station manager at Scipio A. Jones Post Office.

"A lot of people had a hand in this. Colin has a lot of expertise in public art and deserves a lot of credit, and [Cook] is phenomenal. She saw the need from the outset that the namesake of the post office be identified and his story be told."

The portrait will "stimulate a cultural legacy that has been forgotten," Hearne says. "What Scipio Jones did for the law helped everyone, Black and white."

Hampton recalls a moment on Feb. 24, the day the painting was unveiled. It was after the ceremony, and the crowd that had gathered had left.

"I was the last one there, and as I was leaving I got to the door and turned around. That's when it started to hit me. I've never carried a sense of emotion through all of this, it was more just observation. But I told Garbo a few years ago that I wanted to see it hanging. I needed to see it hanging. And at that moment it was like, wow, this is it. It's up." 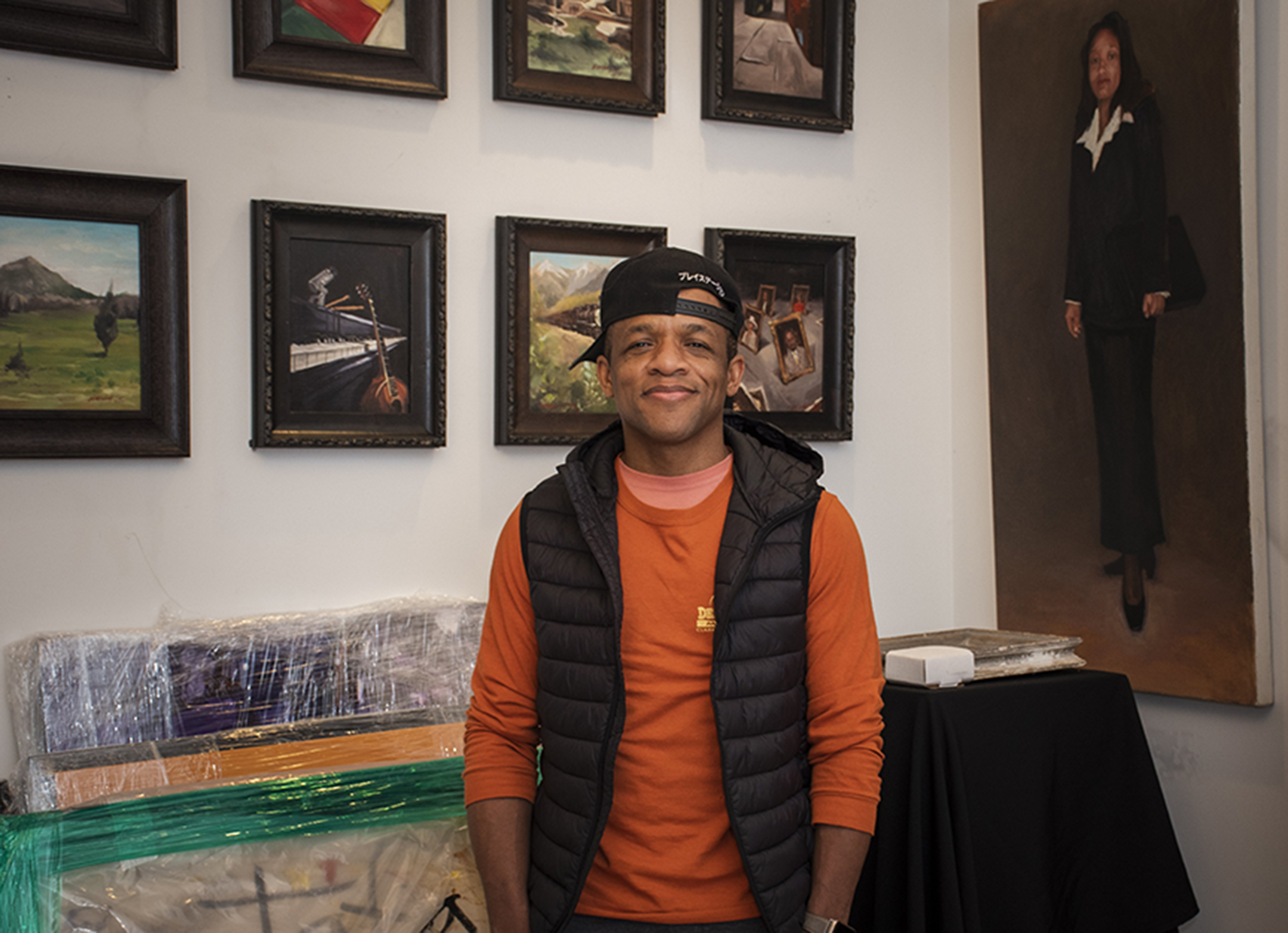 Print Headline: Portrait of a fighter