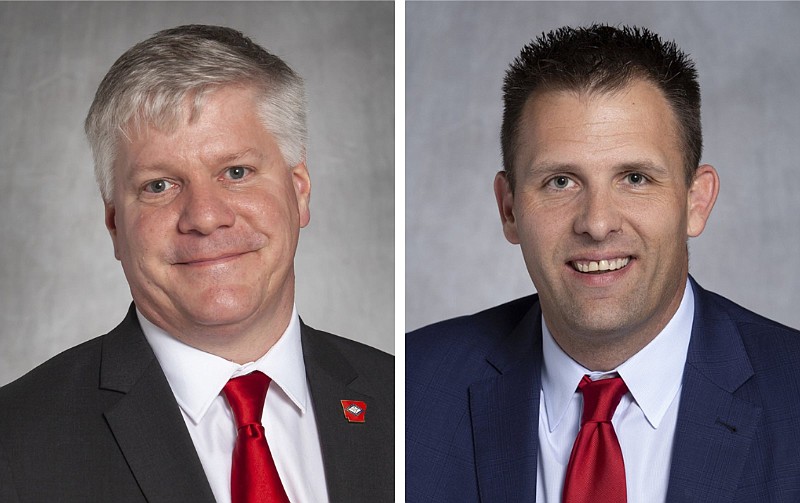 Walter Burgess (left), owner and operator of the laser manufacturer Power Technology Inc., and R.J. Hawk, host and producer of the morning drive-time show on KABZ, 103.7-FM, are facing off in the May 24 Republican primary for the House District 81 seat. Both men are from Bryant.

A radio personality says his local experience makes him the best person to represent a new House district in the Little Rock suburbs, while a small-business owner is emphasizing his statewide government experience and skill set.

R.J. Hawk, host and producer of the morning drive-time show on KABZ, 103.7-FM, and Walter Burgess, owner and operator of the laser manufacturer Power Technology Inc., both of Bryant, will face off in the May 24 Republican primary for the House District 81 seat.

All 100 state House districts were redrawn in 2021 after the previous year's U.S. census. Because of the population growth in Central Arkansas, House District 81 is a new district that covers the Saline County communities of Bryant and Shannon Hills, as well as part of Alexander.

Hawk, 36, has been a member of the Bryant City Council for more than three years and ran unsuccessfully for a state House seat in 2020. He is from Athens, Texas, and graduated from the University of Central Arkansas. He has been a Saline County resident for about a decade, along with his wife, Brianna. They have a 4-year-old daughter and an infant son.

Burgess, 48, is a lifelong Arkansan and has lived in Bryant for more than 20 years. He and his wife, Karen, have a 23-year-old daughter and two sons, ages 22 and 17. A graduate of Central Arkansas Christian High School in North Little Rock, he earned a mix of credits from the University of Central Arkansas and the University of Arkansas at Little Rock. Burgess said he ultimately accumulated more than enough hours for a degree though he chose to follow his own program rather than meet the schools' graduation requirements.

Hawk said he has been "in the fight" for the community and his work on the city council has made him familiar with the issues the new district faces.

"There's just nobody else better, in my opinion, that can be the voice of the people of District 81 than me," he said.

Though Burgess is a first-time candidate for political office, he said he isn't a novice to government service and brings a different perspective from serving as vice chairman of the Arkansas Science & Technology Board and a combination of local, domestic and international experience in business, including working with Fortune 500 companies.

"That's a little different than dealing with just a local city [or] municipality," he said.

"I support small businesses, and I realize how impactful it would be for us to lower those taxes," Burgess said. "We are competing with other states around us. We have to position Arkansas in a favorable light for economic development."

He said he doesn't think the tax should be reduced or eliminated all at once.

"I think gradual is the only way to go. I don't think government can respond quickly to that kind of shock," he said.

He said later that he supports legislative actions that create smaller and more efficient government.

Hawk said he doesn't believe the state can reduce or eliminate the income tax in one fell swoop or in only one year.

"There's so many entities that feed off the state income tax, like let's say healthcare. You can't go in in just one legislative move and wipe it out," he said.

Both men said they would be open to eliminating the income tax entirely but would need to study the issue further.

"To say that the income tax is the reason business doesn't come is false, but one thing that we can do is cut taxes on businesses that make their home in Arkansas," he said.

"You're buying a used vehicle that has already been taxed once, twice, maybe three times," he said.

He added that there are middle income people in the district who have never owned a brand new vehicle and rely on used cars.

Hawk and Burgess are both pro-school choice and said the tax dollars should follow the child.

"I come at everything as a small business owner and free enterprise type of thinker," Burgess said. "If a school is unable to provide good education then a parent should have a right to make a better choice for their child, and the funding should follow the child."

Hawk said he understands the argument that school choice or voucher programs don't support public schools, but said he doesn't think that's the case because the number of students transferring is few.

"I don't believe that's the case because at the end of the day, it's not like the entire school is leaving that entity," he said.

Both men expressed support for a total abortion ban, without exceptions for pregnancies resulting from rape or incest.

"There's opportunities for individuals to be able to have a loving family," Hawk said.

He added that he would be open to a conversation about rape and incest exceptions.

Burgess said the only exemption he would consider would be to save the life of the mother.

Hawk said he wants to take his commitment to supporting law enforcement to the state level by reducing the number of years before retirement for local law enforcement from 28 to 25, which he said Mississippi and Louisiana have done.

He also wants to give officers an annual payment of $2,500 to thank them for their work.

In the recent fiscal session, the Arkansas Legislature passed a one-time $5,000 stipend for law enforcement officers.

Burgess said he wants to ensure that second- through fifth-graders are reading at grade level or above and ensure the state isn't lowering testing standards so schools don't face increased costs for remediation down the road.

"What I'm worried about is if we don't give them the help they need right now, there will be an escalation of costs," he said. "These problems that can snowball quickly, I think we just need to get ahead of it."

As a legislator, Burgess said he would want to support attracting higher-paying jobs in STEM fields by supporting innovative workforce education structures like the Saline County Career Technical Campus, which is run by the county rather than a school district.

Both declined to take a position on the state's Medicaid expansion program that provides health care coverage to more than 300,000 low-income Arkansans, saying they weren't familiar enough with the program at present.

The winner of the partisan primary will face Democrat Roy Vaughn in the Nov. 8 general election.

The last day to register to vote in the primary is April 24, and early voting begins May 9.

Print Headline: Burgess, Hawk vie for a seat in House