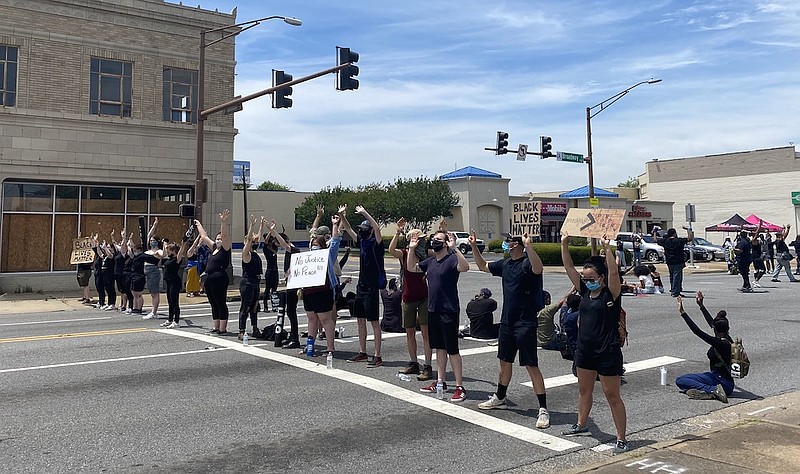 Demonstrators in Little Rock block the intersection of West Third Street and Broadway in this June 2, 2020 file photo amid protests following the death of George Floyd. (Arkansas Democrat-Gazette/Joseph Flaherty)

The conviction of a demonstrator who participated in a 2020 protest in which individuals blocked a downtown Little Rock intersection was vacated after he appealed the decision to circuit court.

Jordan Haas, 36, was arrested along with others at the intersection of West Third Street and Broadway in Little Rock on June 2, 2020, after they blocked traffic for hours.

The demonstration occurred amid numerous protests in Arkansas and around the nation after the killing of George Floyd while he was in Minneapolis police custody.

Little Rock police said at the time that 28 people were arrested at the intersection.

A jury trial had been set for May 11 before Circuit Judge Karen D. Whatley when prosecutors moved to have the case dismissed earlier this month.

Turansky wrote that the state had previously offered to pass the case for dismissal for six months provided Haas commit no new offenses -- an offer Haas rejected, Turansky noted.

He added that Haas "has picked up no new charges since his arrest for the instant charge in 2020."

In an order filed the same day, Whatley dismissed the case and vacated the prior conviction.

According to his defense attorney, Michael Kaiser of the firm Lassiter and Cassinelli, Haas' case was the last among his clients who were arrested at the intersection to have reached a final resolution.

In an email, Kaiser wrote that at this point, every case "has been dismissed, dropped, or acquitted."

"Most of the individuals accepted the State's initial offer of a 60-day pass-to-dismiss where their charges were dismissed so long as they had no new arrests within 60 days of acceptance," Kaiser added. "Several of my clients proceed[ed] to trial before Judge Martin and were acquitted."

At last year's trial before Martin, Kaiser had argued no testimony from any motorist or business showed they were obstructed.

A prosecutor, C. Thomas Odom, contended that by remaining in the street, Haas blocked traffic.