Potential of ‘green’ jobs cited in report; demand in state projected to rise 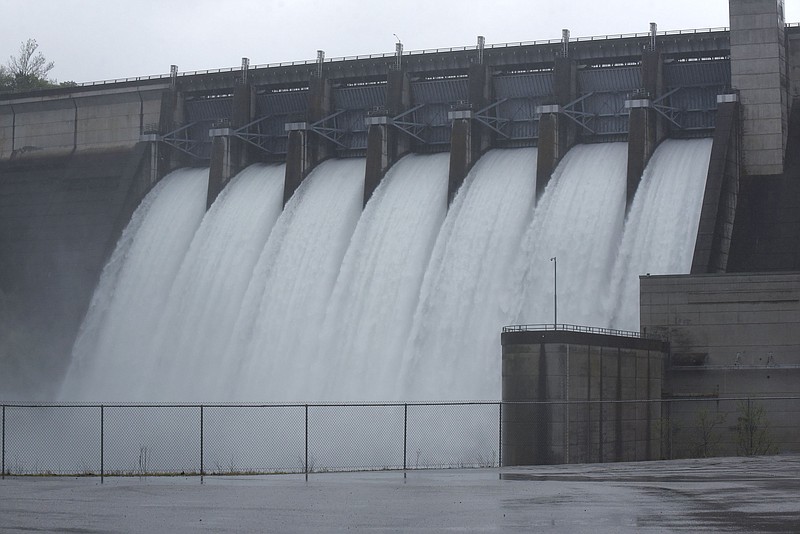 Water roars through the seven sluice gates at Beaver Dam 25 miles northeast of Rogers on Arkansas 187 in this May 2021 file photo. The gates were opened six inches to handle heavy rain, and the flow from those six inches was the equivalent of the flow when one of the dam's two hydroelectric generators is producing electricity at the dam's powerhouse, said Sean Harper, operations manager at the Army Corps of Engineers Beaver Lake office in Rogers. (NWA Democrat-Gazette/Flip Putthoff)

One of the keys to economic growth in Arkansas is training workers for jobs that follow principles of environmentalism, according to a recent report from WorkingNation, a nonprofit group focused on the future of work.

An estimated 6,558 workers across the state have "green jobs," which directly or indirectly support goods or services that benefit the environment or conserve resources, data show. These jobs range from hydroelectric engineers to solar sales representatives and marketing managers. As employers take steps to achieve their climate and sustainability goals, "green jobs" have the potential to grow significantly in the coming years.

Paula DiPerna, an environmental analyst who worked for filmmaker and ocean explorer Jacques Cousteau, said a constant refrain from business leaders and politicians over the years has been "yes, we have to protect the environment, but there's a jobs trade off."

Through a series of recent data journalism projects, including a new report titled "Green Jobs Now: Arkansas," DiPerna and other researchers have found that to not be true, and they say efforts to protect the environment have the potential to create many job opportunities.

Over the next five years, employment demand for green jobs in Arkansas is expected to increase by 9%, outpacing the national average of 5.7%.

While the greenest job may be to plant a tree, DiPerna said there are many indirect jobs that get overlooked and have as much significance.

"What about the engineer who has to run the mapping for where the tree needs to be planted?," she said theoretically. "Or the researcher helping rice farmers to save water?"

According to a recent report, green jobs are spreading across several industries, such as manufacturing, professional services, construction, utilities and public administration. They also offer higher salaries, with an average of $61,466, in Arkansas. Skills most in demand are related to energy conservation, energy efficiency and renewable energy.

Arkansas Secretary of Commerce Mike Preston said in a statement that the future looks bright for the state.

"We've got a strong legacy in agriculture and steel and timber, and really across the board. In the future, green jobs are going to be crosscutting over all those sectors," Preston said.

A planned $1.2 trillion federal infrastructure investment is expected to help drive green job growth across the country and in Arkansas.

College students are landing more renewable energy jobs as people adopt solar panels to their home or for their business, according to the WorkingNation report. There are also studies being done on rice fields to determine ways to reduce methane emissions, a byproduct of over flooding.

With proper training through community colleges, employers or certification programs, data show there are 444,972 workers in Arkansas who could be trained to fill green jobs, nearly one-third of the state's workforce.

Increased costs have been a detractor for employers, farmers and others considering switching to policies or practices that benefit the environment, but it is becoming more affordable with technology and time, DiPerna said. More consumers are supporting products and companies with environmental goals. If companies do not adapt with this trend they are subject to losing customers, she said.

"A company is wise to be thinking about these kind of things," DiPerna said.

Reporting for the Working Nation project was supported by a grant from the Walton Family Foundation. More information is available at Workingnation.com.