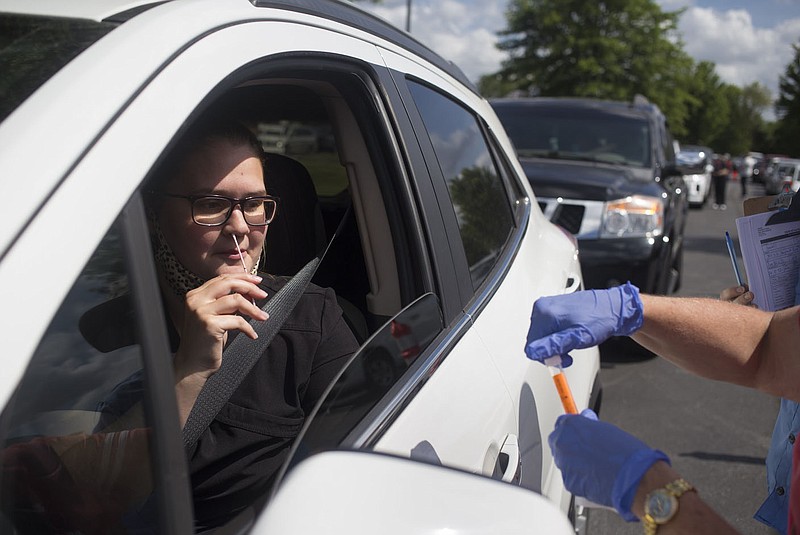 Jodie Sewell of Bentonville self-administers a nasal swab, Friday, June 26, 2020 during a mass covid-19 screening at the Northwest Arkansas Community College in Bentonville. The Arkansas Department of Health hosted a mass screening for anyone at the campus. Their goal was to administer 500 covid-19 tests. NWACC provided the facility and volunteers. UAMS and Mercy Hospital also provided volunteers. (NWA Democrat-Gazette/Charlie Kaijo)

Although a federal program is no longer paying for it, the Arkansas Department of Health will continue to provide free coronavirus testing for the uninsured at its local health units around the state, a spokeswoman said.

Over the past two years, the Health Department has received $13.4 million from the federal Covid-19 Uninsured Program for providing the tests -- more than any other health care provider in the state, according to data from a federal website.

After Congress failed to approve additional pandemic relief funding sought by President Joe Biden's administration, a federal agency notified providers last week that it would soon stop reimbursing them through the program.

The U.S. Department's of Health and Human Services' Health Resources and Services Administration stopped accepting claims for testing and treatment on Wednesday.

After midnight on April 5, it will no longer accept claims for covid-19 vaccinations.

"We are still providing COVID testing and vaccinations at the local health units," Health Department spokeswoman Danyelle McNeill said in an email Wednesday.

"If a person has insurance, we will bill it. If they do not have insurance, the service will still be provided" at no charge, she said.

She said the department "has a process whereby commercial insurance revenue is set aside to cover the costs for the uninsured."

"We will utilize this normal process to pay for uninsured persons that come to local health units for COVID-19 tests," McNeill said.

She said the Health Department receives other federal funding to pay for covid-19 vaccinations.

Providers who received reimbursement for testing, treatment or vaccines through the Covid-19 Uninsured Program were required to provide the services at no cost to the patient.

Regardless of the status of the program, all providers are still prohibited from charging an out-of-pocket fee for the vaccines or declining to vaccinate someone who lacks coverage.

Arkansas hospitals say they are monitoring the situation closely.

"We would never refuse care to an emergently ill patient regardless of their ability to pay," Cara Wade, a spokeswoman for Baptist Health, which has 11 hospitals around the state, said in an email.

For covid-19 treatments and testing for uninsured patients, Baptist has "not made any changes to our policy at this time," Wade said.

"If and when changes are made to our policy, we will certainly communicate this accordingly" so that patients are aware.

According to the federal data, Baptist Health Medical Center-Little Rock, the health system's largest hospital, has received more than $1.1 million for testing and $4.2 million for treatment through the Covid-19 Uninsured Program.

Mercy Health, which has hospitals and clinics in Northwest Arkansas, said in a statement that even with federal funding for both insured and uninsured patients, hospitals "have experienced a negative financial impact in response to the pandemic and covid-19 care."

"With the end of the Health Resources and Services Administration Covid-19 Uninsured Program, Mercy has various financial programs in place to help patients who can't afford their medical bills," the statement said.

"As the virus continues to mutate, it's critical people have the most current vaccinations."

CHI St. Vincent "will continue to provide care to those in need who appear at our doors, regardless of their insurance status," Bonnie Ward, a CHI St. Vincent spokesperson, said via email.

Other health care providers, particularly independent pharmacies, risk losing the most without the uninsured program in place.

Since vaccines became available at the end of 2020, pharmacies across the state have been on the front lines of vaccine administration and testing, later incorporating covid-19 treatments, like monoclonal antibody infusions, into their repertoire of defenses against the disease.

Many have hired additional staff, like nurses, and expanded their floor spaces to facilitate a range of options to fend off covid, meaning expenditures in the tens, if not hundreds, of thousands, to handle the excess capacity of these additional services not usually offered in a traditional pharmacy.

John Vinson, head of the Arkansas Pharmacists Association, said the end of the uninsured program would create more barriers for vulnerable populations seeking access to vaccines and treatment.

It also means "the thousands of pharmacists and other health care professionals who have stood bravely on the front lines of the pandemic will not be paid for the services they've already provided to help Arkansas combat covid-19," Vinson said.

"It is unconscionable to ask health care professionals to spend their own money upfront to pay for extra staff, [personal protective equipment], equipment, and supplies based on the agreement that they would be reimbursed, only for the federal government to stop the program with little warning and leave those health care workers on the hook for tens or even hundreds of thousands of dollars that they were told from the beginning would be paid back," Vinson said.

Chester Barber, pharmacist and owner of De Queen Health & Wellness Pharmacy, said his business has served many uninsured patients in the region.

Barber said he is out about $20,000 after a number of his claims did not get processed by Tuesday, the first deadline to submit claims for treatments and testing.

Now he must decide whether to continue offering covid treatments to the uninsured or turn people away.

There are a lot of pharmacies "in these rural areas taking care of a lot of indigent, uninsured people," Barber said. "A lot of rural areas in Arkansas would be really put against the wall to continue to help these people without some type of compensation."

"When push comes to shove, we have to find a way to continue treating these people," Barber said. "It will be tough."

Several of the state's federally funded community health centers, which operate more than 150 clinics around the state, have received reimbursement through the program.

For services unrelated to covid-19, the centers typically charge fees that vary according to income.

"Right now, in general we're evaluating it to see how it will affect our operations and any cost to patients moving forward," Seth Blomeley, a spokesman for the Community Health Centers of Arkansas, an association representing the centers, said of the end of the program.

"I think it's fair to say we don't have a lot of the really high-cost covid expenses like hospitals would have."

As far as whether free covid-19 tests at the centers will continue, Blomeley said there's no "definitive clarity at this point" from the Health Resources and Services Administration, which also supports the centers through avenues beyond the reimbursement it provided through the Covid-19 Uninsured Program.

"Each community health center is evaluating how best to continue this service for our uninsured patients to ensure access to tests that are so important during this pandemic," Blomeley said.

In addition to the potential for uninsured covid-19 patients to face large medical bills, the ending of the Covid-19 Uninsured Program has raised fears that people will forgo testing, hampering efforts to slow the spread of the virus.

The end of "any kind of program that would assist in us making testing more accessible for the public is concerning," State Epidemiologist Mike Cima said.

"That's one of our main ways that we're able to respond to covid, is identifying cases rapidly, and that would certainly service a vulnerable population that otherwise may not be able to get testing," he said.

Noncitizens, who make up a disproportionate share of the uninsured, qualified for free testing, treatment and vaccines under the Covid-19 Uninsured Program regardless of their immigration status.

"When they can't get the care they need, the whole state is at risk in something that's a public health emergency," Laura Kellams, Northwest Arkansas director for Arkansas Advocates for Children and Families, said.

After rising by seven day earlier, the number of covid-19 patients in the state's hospitals fell Thursday by five, to 141.

The number on ventilators, which rose by one a day earlier, fell by three, to 34, its lowest level since June 7.

After not changing a day earlier, the number in intensive care fell by nine, to 46, a new low for this year and below the low of 49 it reached last year, on April 13.

Information on the number in intensive care before that period wasn't readily available on Thursday.

The state's count of cases rose Thursday by 258, an increase that was slightly larger than the one a day earlier but smaller by 199 than the one the previous Thursday.

Health Department officials have said a large proportion of the cases added in recent days, however, have been from a backlog of faxed-in test results that built up during a surge of infections from the omicron variant.

Cima, the state epidemiologist, said Wednesday that the last of the positive results from the backlog had been entered Tuesday.

The number of cases that were considered active, representing people who have tested positive and are still potentially infectious, fell Thursday by 46, to 1,442.

While lower than the number ever fell in 2021, the number as of Thursday was still above this year's low of 1,425 that it reached Monday.

The Health Department's tally of vaccine doses that had been administered grew by 1,181, which was smaller by 556 than the daily increase a week earlier.

Booster shots made up about 41% of the most recent increase.

The count of first doses rose by 358, which was less than half the size of the increase in first doses a week earlier.

The average number of total doses administered each day over a rolling seven-day period fell to 1,105, its lowest level since the Health Department started regularly releasing vaccination numbers in January 2021.

The average for first doses fell to 374.

According to the U.S. Centers for Disease Control and Prevention, the percentage of Arkansans who had received at least one dose remained Thursday at 66.1%, and the percentage who had been fully vaccinated remained at 53.9%.

The percentage of those fully vaccinated who had received booster shots rose from 38.4% as of Wednesday to 38.5%.

In the percentage who were fully vaccinated, it remained roughly tied with Tennessee for 45th, ahead of Idaho, Louisiana, Mississippi, Wyoming and Alabama.

Nationally, 76.8% of people had received at least one dose as of Thursday, and 65.4% had been fully vaccinated.

Of the fully vaccinated population nationally, 44.6% had received a booster dose.