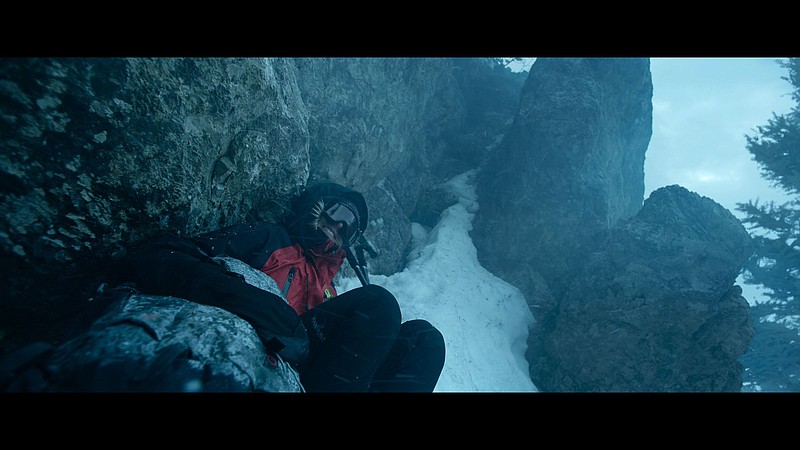 An experienced mountain hiker (Naomi Watts), caught in a blizzard, encounters a stranded, underdressed and immobile man freezing to death on a trail in Malgorzata Szumowska’s “Infinite Storm.”

Inspired by a 2019 article "High Places: Footprints in the Snow Lead to an Emotional Rescue" by Ty Gagne, the new film "Infinite Storm" sets out to tell the remarkable true story of a harrowing mountain rescue attempt amid unbearable conditions (the article was originally published in the New Hampshire Union Leader and it's well worth seeking out). Directed by Malgorzata Szumowska and written for the screen by Joshua Rollins, "Infinite Storm" takes the truly incredible account and mixes in some dramatic layers of its own. The results are mostly gripping and heartfelt.

Naomi Watts produces and stars in this solid and sometimes terrific blend of genre thrills and remarkably restrained drama. Watts plays Pam Bales, a seasoned hiker and nurse with the Pemigewasset Valley Search and Rescue Team. Pam has grit and drive, but echoes from her past point to a trauma that still haunts her to this day. So she spends much of her time hiking. "It's cheaper than therapy," she tells her friend Dave (Denis O'Hare) who runs a local diner, "and the mountains always listen and never talk back."

The movie opens with Pam crawling out of bed and then meticulously packing for her climb up New Hampshire's rugged Mount Washington -- the highest peak in the Northeastern United States. Sitting prominently in the Presidential Range of the White Mountains, Mount Washington is notorious for its unpredictable and often dangerous weather. And (as you can probably guess) that ends up playing a significant role in the film.

Pam's plan is thorough -- a six-hour loop hike along the popular Jewell Trail, up to Mount Washington's snowy summit, and then back down before an impending storm hits. She has packed for every contingency, she tells Dave where she's going, and she leaves her itinerary under the wiper blade of her SUV for searchers to find in case something goes wrong.

The first leg of Pam's hike goes well as she makes her way through the lower forest trails and up the stony mountain pass. Szumowska and her director of photography Michal Englert fill these early scenes with breathtaking shots of the area's natural beauty. At the same time, the camera captures the ruggedness of the land which really emphasizes the perilous nature of the journey to come.

After two hours the coming storm still sits in the distance. But after three hours Pam begins to feel its effects. She considers cutting her hike short and heading back down the mountain. But then she spots sneaker tracks in the snow. She follows them to the peak where she finds a man (Billy Howle) alone and unable to speak; underdressed and freezing to death. With the temperatures dropping and the wind whipping the snow and sleet in a violent frenzy, Pam knows neither of them can last in the worsening conditions. So her survival instincts kick in and she goes to work.

The second act primarily focuses on Pam's race against the clock as she attempts to get a man twice her size (who she names "John") down the mountain before nightfall. Adding to the challenge is John's erratic behavior which leads Pam to wonder if he's on drugs or mentally unstable. Similar to the real-life account, John remains a mystery for most of the film, and the script (penned by first-time screenwriter Joshua Rollins) leaves us with a lot of questions. While that may be an unexpected choice, it ends up adding some emotional heft, especially during the third act.

"Infinite Storm" really is a two-person show, and while Howle does solid work, it's Watts who carries the load. The two-time Academy Award nominee is no stranger to deglamorizing in order to get to the core of her characters and their experiences. Here she gives us an authentic portrait of Pam Bales. And even in the couple of instances where the film gets a little carried away heightening the drama, Watts keeps Pam genuine and relatable.

Aside from the couple of instances where Szumowska and Rollins give in to the urge to increase the action, "Infinite Storm" remains surprisingly grounded. It proves to be a key reason the film works. We're also treated to a surprising amount of craft, especially through the camera. Intense closeups, partially obstructed framing, blurred perspective shots -- it's all strategically used to intensify the drama and root the emotions.

"Infinite Storm" ends up in an interesting place. I can see it not having enough thrills for genre fans, and it may lack the risk-taking style and originality for the arthouse crowd. But Szumowska's (mostly) sharp focus and restraint, together with yet another strong and fully committed performance from Watts, capture the heart of this extraordinary true story. And that's enough to make us care about these two characters and the journey they take -- a journey that proves to be a lot more than a treacherous trip down a mountain.