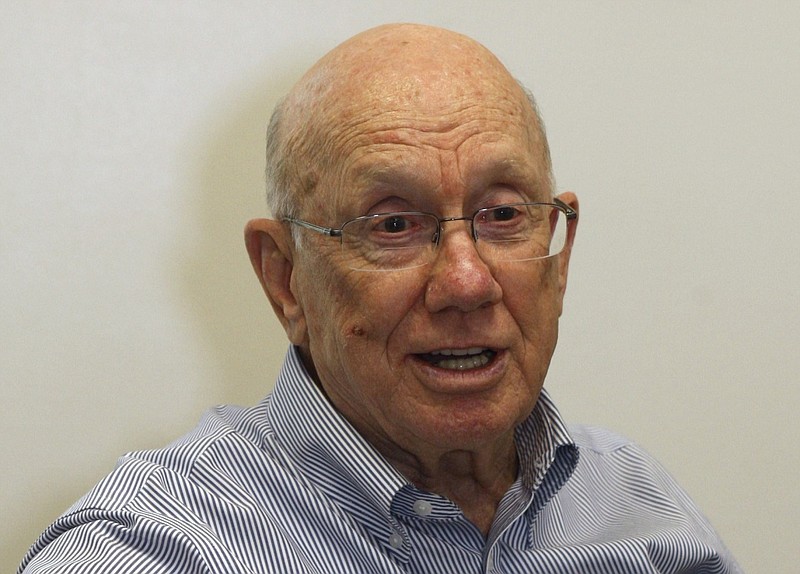 Kaneaster Hodges Jr., 83, of Newport died Wednesday from an aortic aneurysm, according to family members.

"It was devastating news to me," Dr. Morrison Hodges of Minneapolis said in an email to family members and friends in which he referred to his little brother as "Neasty."

"We were close as children," he wrote. "We both went to Princeton for college. We talked every week."

Kaneaster Hodges was an avid duck hunter who participated in the Wyoming One-Shot Antelope Hunt on the Senate team in 1978.

U.S. District Judge Billy Roy Wilson said Hodges had a phenomenal memory for pretty much everything, except for one.

"He kind of over-remembered his shooting ability as a duck hunter," said Wilson. "Compared to me, I thought I would do a lot better than he would tell."

Hodges, a Democrat, was a senator for 13 months. Gov. David Pryor appointed him to serve out the remaining term of U.S. Sen. John McClellan, who died in 1977. Pryor ran for the Senate seat in 1978 and won, taking office in January 1979.

During his time in the Senate, Hodges was most noted for his stand supporting the Panama Canal treaties and his position against tuition tax credits for parents who sent their children to private schools, according to the Encyclopedia of Arkansas.

"Kaneaster Hodges, tabbed from normalcy by then-Gov. David Pryor to go to the U.S. Senate on the passing of John L. McClellan, did a splendid job," Arkansas Democrat-Gazette columnist John Brummett wrote in 2014.

After a year in Washington, Hodges returned to normalcy. Or at least Newport.

He was the second of six children, and the first one to leave this world.

His father was also a lawyer.

Kaneaster Hodges Jr. graduated from Newport High School in 1956. He married his high school sweetheart, Ruth Lindley Williams, in 1960. They would eventually have two children.

Kaneaster Hodges got a bachelor's degree from Princeton University in 1960 and a master's degree in theology in 1963 from the Perkins School of Theology of Southern Methodist University in Dallas, where he graduated with honors, according to the encyclopedia.

While in seminary, he traveled the country as a civil-rights activist and national president of the Methodist Student Movement, said Cindy Burns of Little Rock, his little sister.

During that time, he would accompany a Black student to places in Dallas that allowed only whites and would sit with him in those places, said Burns.

"It was just really important to him," she said. "He had such a deep faith and a heart for service."

After seminary, Kaneaster and his wife moved to Massachusetts, where Kaneaster Hodges pastored two churches. He also served as a chaplain intern at Rikers Island Correctional Institution in New York and the Boston State Hospital.

He attended Boston University, where he earned a master's degree in pastoral counseling.

In 1964, Hodges enrolled in law school at the University of Arkansas, Fayetteville, and he received a degree three years later. He returned to Newport to practice law with his father and brother David Hodges.

Kaneaster Hodges Jr. also served as the Newport city attorney and as deputy prosecuting attorney for Jackson County from 1967 to 1974.

Beginning in 1972, he worked for McClellan's Senate campaign, and he later coordinated Pryor's gubernatorial race in eastern Arkansas in 1974.

He became legislative secretary to Pryor in 1975.

"He was extremely bright," said Wilson. "He had an unusually high IQ. He could read a bill and see the hidden agenda in them. That's a remarkable ability. He would catch it every time. And that was valuable to the governor. He had X-ray eyes when it came to those agendas."

Hodges served on several boards and commissions, including the Arkansas Game and Fish Commission and the Walton Family Charitable Support Foundation. He was a trustee for the University of Arkansas System and Arkansas College, now Lyon College, in Batesville.

"Kaneaster Hodges was a great attorney, a committed conservationist and a good man who was always on the level," said Clinton. "He did a fine job in every mission he took on, including his 13 months in the U.S. Senate. Hillary and I liked and admired him very much. Our thoughts and prayers are with Lindley and his family."

"I knew him before he was appointed to the Senate, but he was a great appointment by Sen. Pryor, and we served in Congress together," said Tucker, who was in the U.S. House of Representatives from 1977 to 1979.

"He was always very close to his community," said Tucker. "He never deserted Newport, Ark., and that part of the state. I'm sorry to lose him, but I'm glad he gave so much of his life to the state of Arkansas and its people."

Burns said that besides duck hunting, her brother liked to fish and collect arrowheads.

"He was always learning," she said. "Loved to read. A voracious reader. It was a life well-lived. He had an incredible range of interests."

Burns said he had a wonderful wit and a great sense of humor.

"You couldn't beat him in a repartee session," said Wilson.

"He was funny and brilliant and adored," said Lin Hodges, Kaneaster's daughter. "He had wonderful friends. He was committed to his hometown of Newport and to his wife and to his family."

"O God, this has been a busy, difficult week in the U.S. Senate, with long hours, hard debate on issues, and ideas strongly held and deeply felt on all sides. On occasion, we have been even contentious.

"Let us rest tomorrow. Heal our wounded feelings, release our tensions, restore our objectivity. Give us new vigor. Deepen our ideals; make stronger our faith.

"Call us relentlessly to seek the truth. Renew a right spirit within each of us."