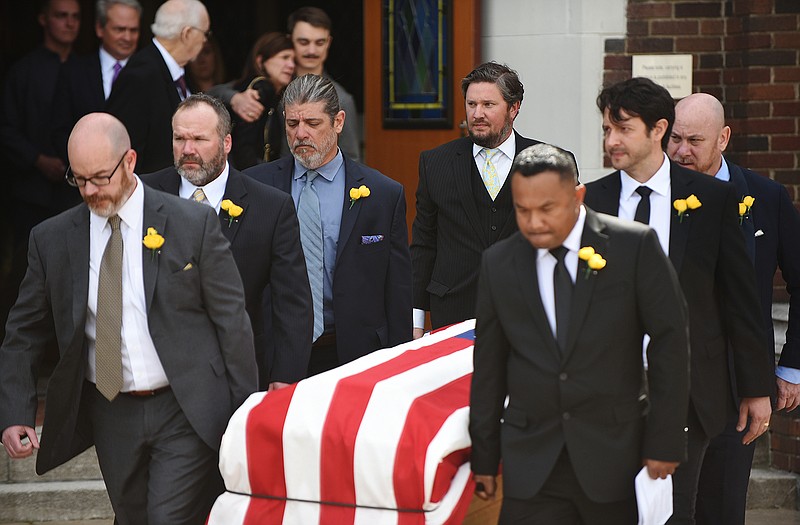 The casket of Brent Renaud is carried out of the sanctuary at Pulaski Heights United Methodist Church following the funeral service Saturday, March 26, 2022 in Little Rock. (Arkansas Democrat-Gazette/Staci Vandagriff)

Brent Anthony Renaud was a living example of the Bible verse from the prophet Micah that says to "do justice, love mercy and walk humbly," his friend and fellow documentary journalist Jon Alpert said Saturday during Renaud's funeral.

Renaud was shot and killed March 13 by Russian troops outside Kyiv, Ukraine, where he was filming civilians escaping an attack from the Russian military. He was honored in a Saturday afternoon funeral service at Pulaski Heights United Methodist Church in Little Rock, in which hundreds of people packed the church's sanctuary.

"Brent was very talented, fearless, kind, brave, compassionate, focused and expertly skilled at showing us the reality of situations that he willingly chose to immerse himself into," said Lt. Col. Brian Mason, a retired soldier who worked closely with Renaud and his younger brother, Craig, when they filmed a documentary about the Iraq War.

Brent Renaud was born in Memphis in 1971, grew up in Little Rock and graduated from Hall High School. He earned a Master of Arts degree from Columbia University and was a 2019 Nieman Journalism Fellow at Harvard University. He was collecting material for a report for Time Studios about the refugee crisis when he was killed.

Their Peabody Award-winning work brought attention to human suffering like that in Ukraine, which Russia invaded Feb. 23.

Brent Renaud sought out Alpert and his wife, Keiko Tsuno, to help him learn documentary filmmaking, Alpert told the mourners at the funeral. He was one of several speakers, including Mason, who eulogized Renaud.

"I feel parental responsibility, maybe a little bit of parental pride and parental guilt, because Brent wanted to walk in our footsteps, and our footsteps meant walking into really dangerous places," he said.

He recalled a time when he and Renaud were nearly killed while filming in Afghanistan. Ten machine guns fired at them, but "Brent didn't blink," Alpert said.

He plans to open a new documentary theater and name it after Renaud.

"He was put here on Earth to do this, and he did it better than anybody else," Alpert said.

On March 14, the day after Renaud's death, Ukrainian President Volodymyr Zelenskyy wrote a letter to Renaud's parents and siblings expressing "heartfelt condolences" for their loss, posting the letter on his official Twitter account.

"May Brent's life, service and sacrifice inspire generations of people all around the world to stand up [and] fight for the forces of light against forces of darkness," Zelenskyy wrote.

"Everybody in my community felt like nobody cared, but guys like these, great men of God, gave us light," he said.

Mason said Renaud was "an extra set of eyes and ears that I most certainly appreciated and often relied upon." He also said Renaud's work contextualized the difficulties it portrayed.

"His work exuded real insight and perspective, often showing us how dangerous it truly can be to lose our sense of compassion, our sense of empathy and our sense of understanding," Mason said.

He added that he believed Renaud's killing was "a deliberate act" by an "evil enemy with an evil leader," referring to Russian President Vladimir Putin.

Alpert agreed with Mason that witnessing and covering the harsh realities of war makes journalists targets of some government figures, but this did not deter Renaud from his work.

"He did it so that someday, maybe there would be no more war," Alpert said. "We're not there yet, we're really far away [from that], but he really, really tried."

Juan Arredondo, a video journalist and native of Colombia traveling with Renaud in Ukraine, was severely wounded in the shooting that killed Renaud. Arredondo is expected to make a full recovery and be released from the hospital within the next several days, Craig Renaud said during the service.

He was the last to speak, and he read "Invictus," a poem by William Ernest Henley, at Arredondo's request. The poem concludes with "I am the master of my fate; I am the captain of my soul."

Mami Renaud, Craig's wife, expressed gratitude to her deceased brother-in-law for being a parental figure to his three nephews, including her son, Taiyo.

"I know you always wanted your own child, and Tai and Taylor and Peyton -- they're your [children]," she said.