North Little Rock and Travelers at odds over Dickey-Stephens Park 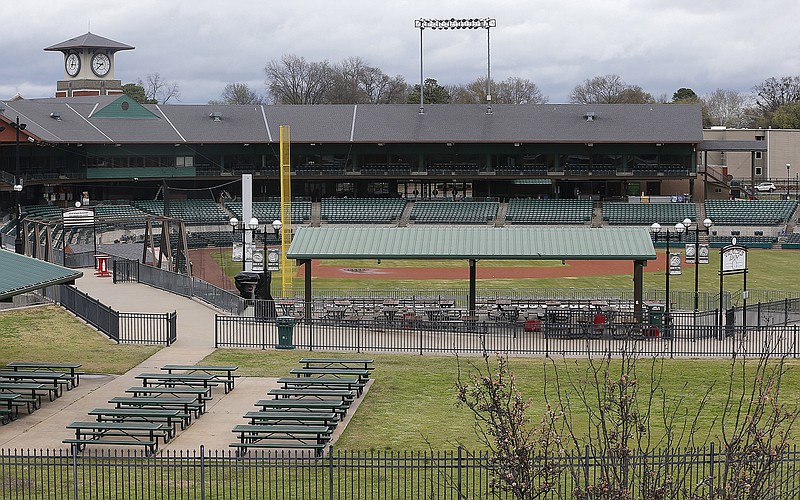 Whether the Arkansas Travelers will remain in North Little Rock for the long term is an open question, as city leaders and the team are deadlocked over who should pay for upgrades at Dickey-Stephens Park.

Dickey-Stephens Park has been the picturesque riverfront home for the Travelers since the stadium opened in 2007. But with a new "facility standards" mandate on minor league parks coming from Major League Baseball, the Travelers' future in North Little Rock could be in jeopardy.

North Little Rock Mayor Terry Hartwick vowed to do everything he can to keep the Travelers in the city, agreeing to pay for roughly $7 million in renovations to the stadium. But the Travelers are also insisting that the city pay for approximately $5 million in other upgrades, including the field lights, clubhouse, batting cages, bathrooms, a new roof and air-conditioning units.

"It's their stadium; they own the facility, they should be required to fix it and get it up to standards for MLB," said Rusty Meeks, executive vice president and chief executive officer of the Travelers. "Or, you know, we could be asked to relocate."

As a AA affiliate of the Seattle Mariners, the Travelers are a way station for the major league club's top prospects who must earn their chops to prove they belong in the big leagues.

Meeks said that if upgrades to Dickey-Stephens Park aren't made by 2023 -- the deadline for minor league stadiums -- then Major League Baseball could ask the Travelers to explore relocation. Meeks said the earliest the Travelers could relocate would be 2025.

"We love Dickey-Stephens Park. We want to stay in North Little Rock. We're just asking the city to fix the stadium and their facility to be in compliance," Meeks said. "Again, we pay rent to them, and we need a facility that's in compliance with Major League Baseball standards."

Other cities with minor league teams have pledged funding for facilities to accommodate women, for more accommodations for players, and for seating and air conditioning. The Springdale Public Utilities Board recently approved $48,000 for upgrades to Arvest Ballpark, home of the Northwest Arkansas Naturals.

Dickey-Stephens Park opened in 2007, and the city and the Travelers agreed to a 20-year lease that year. Meeks said the Travelers will honor the lease.

While the Travelers maintain that the city is required to pay for upgrades because it owns the stadium, North Little Rock officials point to language in the lease saying, "The Team shall be solely responsible for, and shall make and perform, all Maintenance and Repairs."

"While the Travelers may say we're the landlord and we're responsible [for making] those repairs and improvements, under the terms of the lease -- that's actually their responsibility," said North Little Rock City Attorney Amy Fields.

Hartwick said this language in the lease is a legal bind, and the city can't go beyond the upgrades it already promised to make.

"I'm just going to go by what the contract says, and that's about all I can do," Hartwick said. "If I do anything else, I'm breaking the law, if you think about it."

In December, Meeks spoke at a North Little Rock City Council meeting, explaining the mandate from Major League Baseball for stadium upgrades and noting that Hartwick's chief of staff, Mike Davis, had toured the ballpark with Travelers officials.

Hartwick promised to fix the stadium's field, which has become a perennial problem as sinkholes develop when the Arkansas River rises.

The sinkholes are caused by the stadium being 10 to 12 feet below ground level and adjacent to the Arkansas River, according to Chris Wilbourn, director of the city's Engineering Department.

Wells will capture groundwater and sediment below the stadium that are the cause of the sinkholes.

"They will actually keep the groundwater down permanently so it never reaches a level where it causes the sinkholes -- that's the job in a nutshell," Wilbourn said.

The city plans to spend around $6 million to hire a firm to add the wells that will prevent flooding and another $700,000 to fix the field. North Little Rock will pay for those upgrades by issuing bonds, Hartwick said.

The Travelers moved from Little Rock to North Little Rock in 2007 after voters passed a sales tax referendum to build a riverfront ballpark costing taxpayers $32.6 million.

Hartwick, who led the North Little Rock Chamber of Commerce at the time, was one of the key proponents of the stadium, saying the Travelers could serve as a linchpin in the city's growing downtown area.

"It's a great attraction," Hartwick said. "I just don't think I want to be the mayor that says we don't want them."

For the city of North Little Rock, Dickey-Stephens Park -- along with Simmons Bank Arena -- is symbolic of the growing downtown area. The venues are two of the region's largest.

"Look at the growth since the ballpark moved over here -- to Argenta and that area -- and to now," said Derrell Hartwick, president and chief executive officer of the North Little Rock Chamber of Commerce. "[On] our Main Street downtown here, we don't have one open space for retail right now. We're completely full, which is a great thing."

Derrell Hartwick, who is the son of Mayor Terry Hartwick, said the Travelers also serve as a great piece of marketing for the city when it tries to attract businesses to relocate.

The Arkansas Travelers, with their predecessor the Little Rock Travelers, have been playing baseball in Little Rock and North Little Rock nearly every year since the end of the 19th century. Since their rebirth in 1963, the Travelers have been a minor league affiliate of the Philadelphia Phillies, the St. Louis Cardinals and the Los Angeles Angels.

With the backing of North Little Rock taxpayers, the Travelers moved in 2007 from their home at Ray Winder Field in Little Rock, as many felt the 75-year-old stadium was outdated. In 2017, the team became the AA affiliate for the Mariners. Meeks said the team's affiliation agreement with Seattle goes until 2031 and is not in jeopardy.

"We treasure their friendship; we treasure having them," Hartwick said. "It's one of those things I don't ever want to say we don't have."