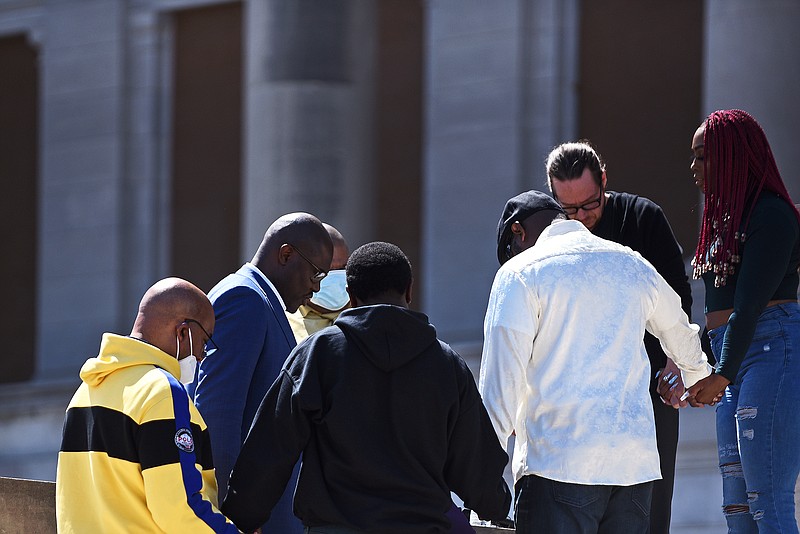 Mayor Frank Scott Jr. (second from left) prays with attendants of the Thousand Man Meeting “Us vs. Us" on Sunday at the State Capitol in Little Rock. NFL player Reggie Swinton spearheaded the event with hopes of eliminating the ongoing struggle of violence in the city. See more photos at arkansasonline.com/328rally/. (Arkansas Democrat-Gazette/Staci Vandagriff)

As the homicide toll rose in Little Rock, a group of individuals fighting against violence in the Black community gathered on the steps of the Arkansas Capitol Sunday.

Reggie Swinton, a Little Rock native and former professional football player, held the rally because he said the city's homicide rate was weighing heavily on him after the death of Andre Luckey -- a man Swinton says he helped raise.

Luckey, 38, was killed on Jan. 21. He is one of 15 homicides in the city this year. The city saw two more homicides over the weekend.

"I put this together because I'm tired," Swinton said. "I will help any kid I can. It doesn't matter who you play for or where you come from."

He called on parents to be more involved in their kids' lives, others to mentor, volunteer in schools and youth programs such as the Boys and Girls Club.

"These kids have to have something positive," Swinton said. "If they don't, they don't know what positive is."

Swinton said his life changed when he first saw his name in the paper for playing football. It drove him to play better so more articles would be written about him, he said.

A graduate of Little Rock Central High School, Swinton went on to play for teams such as the Dallas Cowboys and Detroit Lions.

A crowd of more than 100 people gathered for the rally that Swinton called the "Thousand Man Meeting: Us vs Us". Many of those in the crowd had lost a loved one to a homicide.

Swinton also called on people to say something if they see something.

"You're not going to kill someone in front of me," Swinton said. "I'll tell the police the whole thing."

The rally spoke against gang street-wear such as baggy pants and "murder music" -- music focused primarily on killing.

"The goal is to get these kids graduated and into college," Swinton said.

The crowd heard from multiple parents who had lost at least one child to homicide in the city -- two of the parents had lost as many as three children.

Earl Williams said he lost three sons between 2005 and 2013 to homicide.

"A gun is not the answer," Williams said. "We have people killing each other who love one another."

"For 16 years I've been carrying this ugliness," Williams said.

To overcome the war, the community is going to need to learn to love their enemy, he said.

"The guy who killed my oldest son -- This past July, I shook his hand and hugged him," Williams said. "Why make war? Make peace."

Lakesia Smith lost her son, Shoncoven Smith, in 2014. She and other mothers who've lost children in the city stay connected.

"These mothers are tired," Smith said. "We are up all night."

"How many bodies do these guys get before they get to court," Smith said.

Smith said she spends time in her community talking and listening.

"If you see something, say something," Smith said.