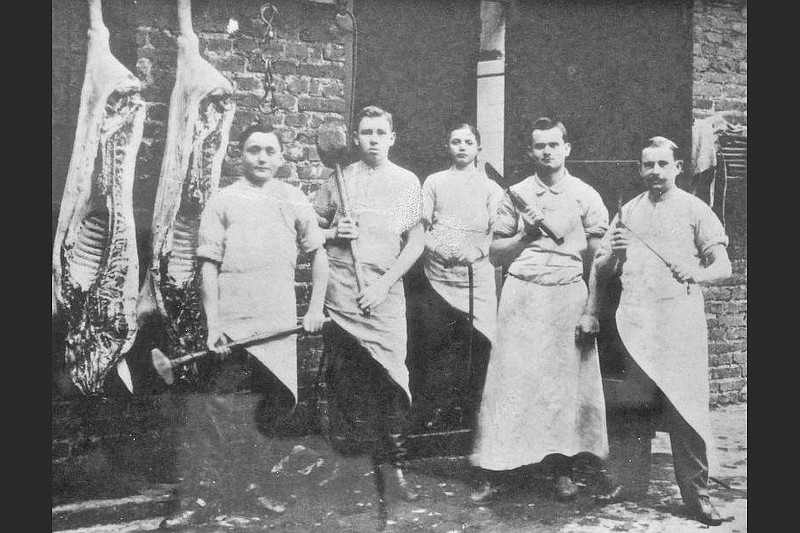 A vintage photograph shows an era when butchering was still done at Petit Jean Meats in Morrilton, an Arkansas original. (Special to the Democrat-Gazette/Jack Schnedler)

Editor's note: This is the first feature in Land of Opportunity, a new occasional series spotlighting all things made in Arkansas.

MORRILTON — A full century ago, family roots were planted for the company that is now Arkansas' only remaining privately owned maker of red-meat products. It happened when an aspiring butcher emigrated from inflation-ravaged Germany to find work in Little Rock.

"The meat business and our operations have changed more in the two decades of the 21st century than in all the eight decades before," Ed Ruff says. "That has come mostly from political and cultural changes in the wider society." 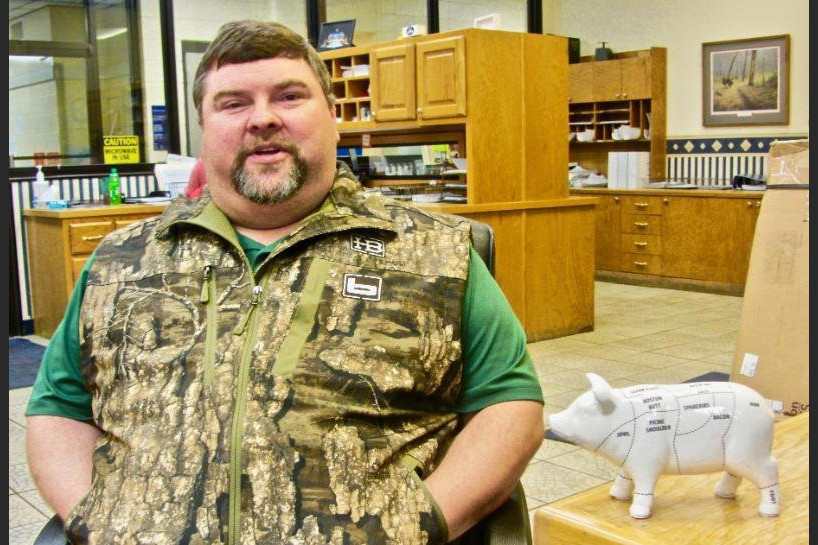 Edward Ruff, president of Petit Jean Meats, is seen with a ceramic pig. (Special to the Democrat-Gazette/Jack Schnedler)
Still, the company president remains optimistic about the future of Petit Jean Meats. He observes that "people have to eat. We can change or do away with a lot of material things, but we still have to eat. I believe the future of the company is very strong."

When Schlosser arrived in Arkansas in 1922, there were numerous meat packers around the state. After working for a couple of them in Little Rock and Conway, he joined a partner to open a small retail market in Morrilton.

Soon after Schlosser became sole owner, a fire destroyed the market. But he rebuilt under the name Morrilton Meat Market and Sausage Factory. Soon he brought Mary Ruff's sons, 12-year-old Ed and 10-year-old Lonnie, into the business. The second generation in the business, they started out making home deliveries by bicycle after school and on weekends. 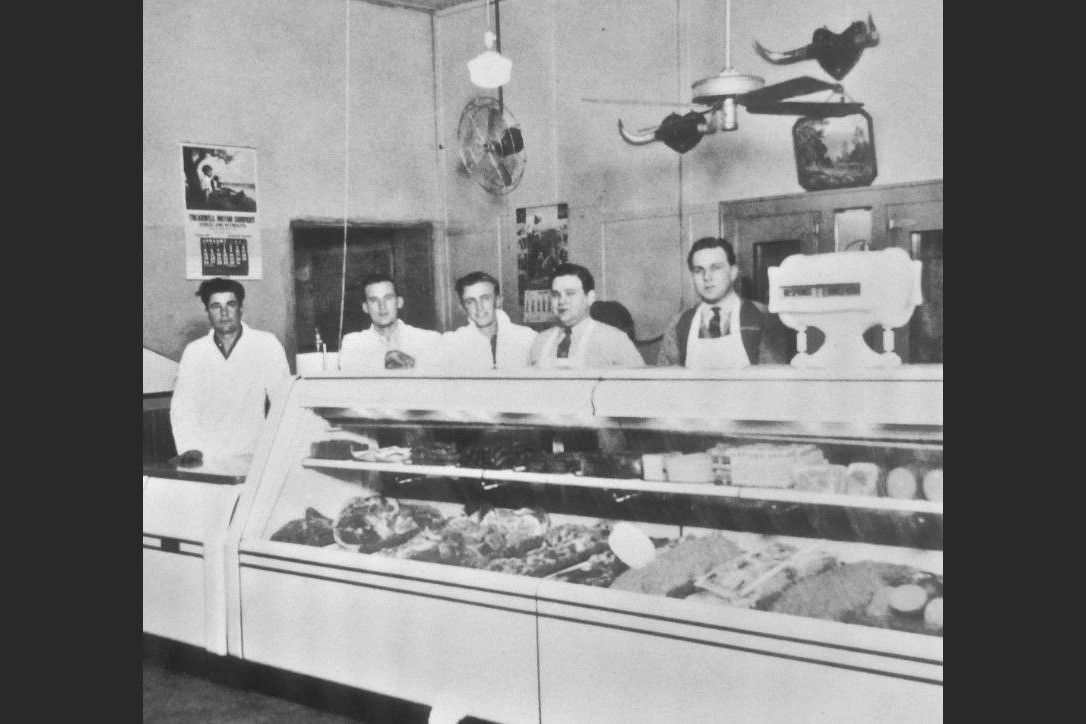 Until 1943, Petit Jean Meats operated a retail outlet in Morrilton. (Special to the Democrat-Gazette/Jack Schnedler)
During the 1930s, a decade ravaged by the Great Depression, the Ruff brothers added a wholesale line and became Morrilton Packing Co. while creating the Petit Jean brand for the first time. The company survived in part through federal contracts to butcher cattle. It ran a retail shop in Morrilton until 1943.

Two more major fires, in 1946 and 1979, required major rebuilding. In 1968, the decision was made to stop selling dressed beef and focus solely on the pork products that have brought the company its renown.

After Lonnie Ruff died in 1979, brother Ed assumed the CEO's position. In 1987, completion of a new 48,000-square-foot processing plant made room for lunch meat to be added to Petit Jean's repertoire. After Ed's death in 1990, his son David became head of the company.

As pork processing changed, Petit Jean stopped slaughtering its own hogs in 1995 and began buying fresh pork cuts from packers. Smoking the meats now takes place in rooms where temperature and humidity are carefully controlled. The smoking is done for 18 hours with hickory wood rather than the more common liquid smoke. 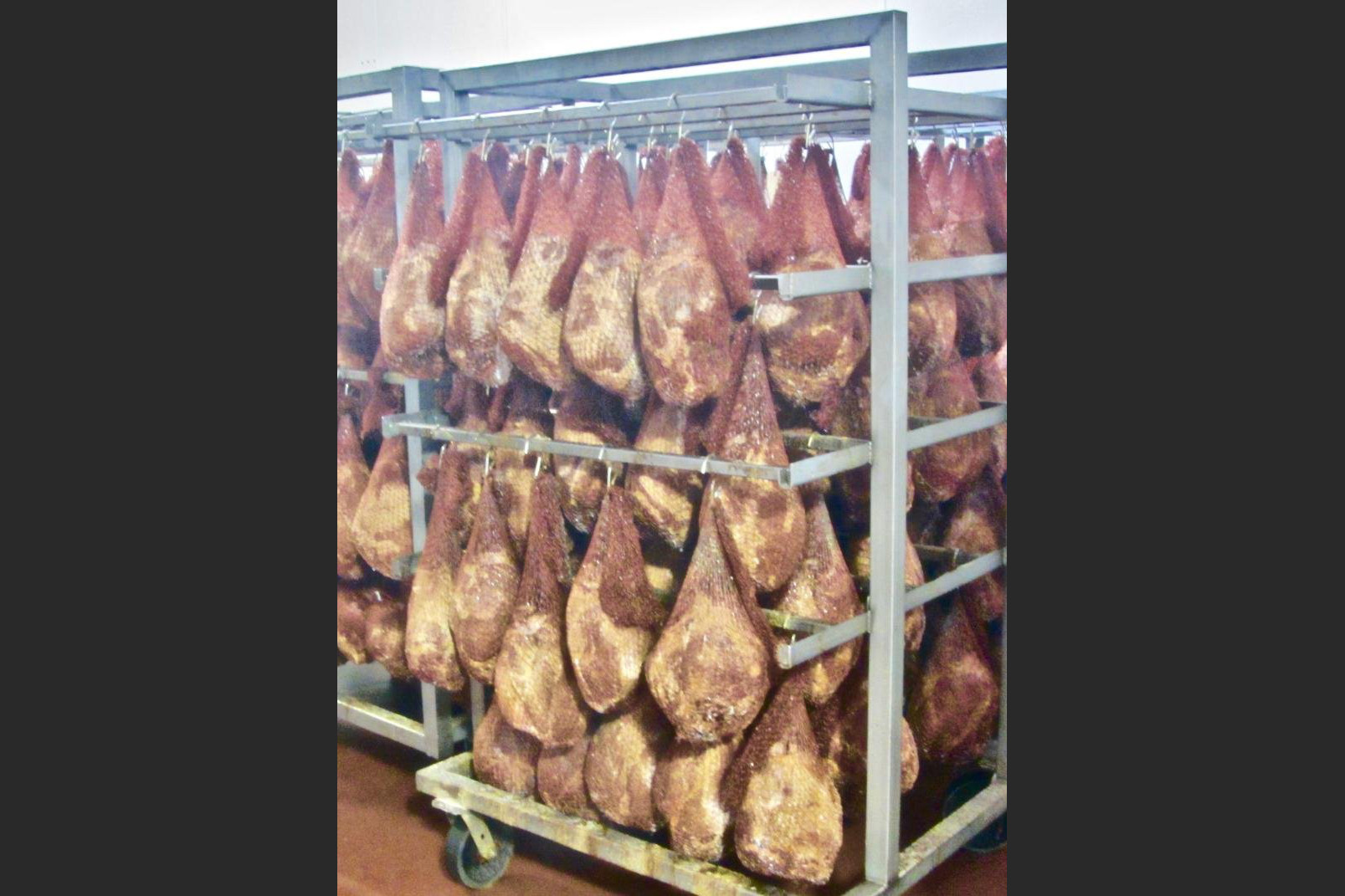 Hams in the process of smoking are arrayed at Petit Jean Meats in Morrilton. (Special to the Democrat-Gazette/Jack Schnedler)
Current president Ed Ruff came to work at the family business when he was 13, mowing the lawns and doing other grounds maintenance. He later worked in shipping, packaging, processing, delivery and maintenance. After his father died in 2018, he became president.

"I take pleasure and pride in everything about our business," he says. "I enjoy the family history — not only mine but also the history of the various ancestors and relatives and employees who've made their living building Petit Jean Meats."

Ham and bacon continue to be the most popular lines for the company. A newer venture is pizza toppings, part of what Ruff calls "a focus on building a bigger food service portfolio." Online sales have become an important part of business, "but we remain anchored in retail sales and private labels."

As consumer habits change, Ruff says: "We don't consider our top competition to be other meat brands in the grocery store. We consider fast-food chains to be our primary rivals. If people are grabbing a cheeseburger for lunch, then they are not having a Petit Jean bologna sandwich. And a large part of our business is sandwich meats." 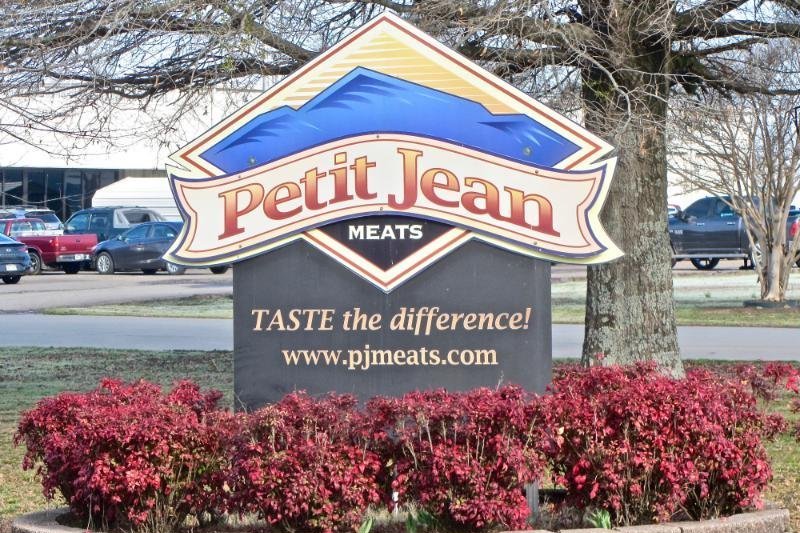 Petit Jean Meats’ plant is located at 51 Blue Diamond Drive in Morrilton. (Special to the Democrat-Gazette/Jack Schnedler)
Ruff has two young daughters, but isn't yet certain of prospects for a fifth generation operating the family business, which has about 70 employees:

"The future of Petit Jean Meats past our generation will have to be looked at depending on market conditions at the time. In today's business environment, plans like that are hard to make long in advance. I will encourage my children to make sure they explore all options, as there is a lot of opportunity out there."