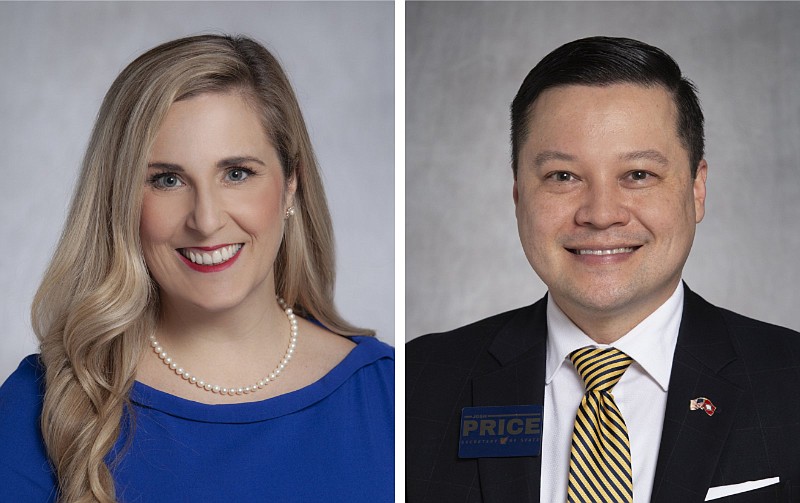 Anna Beth Gorman and Josh Price, the two Democratic candidates for Arkansas secretary of state, are shown in this undated combination photo.

The Democratic primary for Arkansas secretary of state pits an executive of a nonprofit against a former county election commissioner, both of whom say their experience makes them the best candidate for the job.

Anna Beth Gorman, executive director of the Women's Foundation of Arkansas, and Josh Price, a small-business consultant and former Pulaski County election commissioner, will face off in the May 24 primary.

The winner will face the Republican nominee, either incumbent Secretary of State John Thurston or former state Sen. Eddie Joe Williams, in the Nov. 8 general election.

The secretary of state's office oversees elections, maintains the state Capitol grounds and processes a number of services for businesses and nonprofits.

Price, who served two terms on the Pulaski County Election Commission, has said he is running to protect the constitutional right to vote and that he is the only candidate with on-the-ground elections experience.

"I'm uniquely qualified for this position," he said. "I'm the most prepared to jump into that role on day one."

Gorman said she is a better choice for the challenges of the job because of her statewide management experience, and she wants voters to understand the broader responsibilities of the office.

"To me, the choice should be about how are we going to ensure that this officeholder has really had experience to jump in and manage a large agency," she said.

Gorman, 40, grew up in Texarkana, Texas. She earned a bachelor's degree in political science from Hollins University and a master's degree in public administration as well as a graduate certification in nonprofit management from the University of Arkansas at Little Rock. She was formerly chief membership, volunteer and program officer for Girl Scouts Diamonds of Arkansas, Oklahoma and Texas. She is married with two children and lives in North Little Rock.

Price, 42, is originally from southwest Arkansas. He attended Baptist Prep High School and earned a bachelor's degree in sociology from the University of Central Arkansas. He previously worked as digital communications director and policy advisor for the Delta Regional Authority and as public information officer for the U.S. Small Business Administration. He lives in Maumelle.

Gorman is a first-time candidate for political office; Price unsuccessfully sought the Democratic nomination in a 2018 state House race for a Republican-held seat covering the Maumelle area.

Arkansas ranks last in the U.S. in voter turnout and registration, according to a report published last year by the U.S. Election Assistance Commission.

Both candidates said they want to increase voter engagement and said they support online voter registration, something Arkansas is one of eight states not to offer, according to 2021 data from the National Conference of State Legislatures. A bill to establish online voter registration in Arkansas, House Bill 1517 by Rep. Justin Boyd, R-Fort Smith, failed in the 2021 legislative session.

Price said he would advocate for a law like HB1517.

Price's plan for increasing voter registration and turnout includes partnering with library system bookmobiles to register Arkansans to vote or update their voter registration, as well as to provide free photo IDs to people who don't have them. Arkansas' voter ID law, enacted in 2017, requires voters to present a state-issued document that includes their name and photograph at the polling place.

Price said the office needs to provide standardized procedures on how to address common scenarios when county election commissioners are working through voting issues or deciding whether to toss a ballot. He also said he wants to provide more services for disabled voters.

"There needs to be more customer service from that office," he said.

He said he would advocate for legislation that would create a "cure period" or a window to fix small errors on absentee ballots. Currently, voters whose ballots are tossed because of an error are not notified until after the election, something Price said comprises voter suppression.

A bill that would have established a cure period, Senate Bill 701 by Sen. Clarke Tucker, D-Little Rock, failed in the 2021 legislative session.

Price also said he would create an office of voting rights restoration for convicted felons, who are not eligible to register to vote unless their sentence has been pardoned or completed.

Gorman said the current administration is not meeting people where they are with regard to voter outreach. She said she would partner with spokespeople in different spaces and identify and target demographics where there is the most room for improvement in voter registration rates.

"This is the work of equity," she said. "There are absolutely different community needs."

Gorman said she would work with clerks in all 75 counties to make sure they understand what the processes are and provide information on new legislation. She said the secretary of state has to acknowledge why counties might have taken a particular approach.

She said she is supportive of reviewing the voting rights restoration process, because many felony convictions are the "legacy of a legal system that targets minorities."

When it comes to serving businesses, Gorman said business owners in Arkansas experience different levels of customer service and professionalism when calling the secretary of state's office.

She said she would ensure the team knows answers to frequently asked questions and that the office should collaborate with other agencies such as the Arkansas Economic Development Commission to be a champion and advocate for opportunities.

Gorman said she wasn't notified, as a nonprofit director, by the current administration of the opportunity to apply for Paycheck Protection Plan loans, and said she would want to make people more aware of those resources and engage with and support entrepreneurs.

"Business ownership is one of the best vehicles for economic mobility in our state," she said.

Price said he doesn't think it's difficult to start a business in Arkansas, but "you have to be in the know to kind of figure it out" because the secretary of state's website is not intuitive to the average user.

"It needs to be spelled out," he said.

He suggested setting up an automated process wherein the secretary of state's office pushes out resources via email for new businesses after they incorporate, including opportunities for mentorship and help applying for loans.

Both candidates said the secretary of state's website, including the portal where candidates and political action committees file campaign finance reports, needs an overhaul to make it more user-friendly.

Price's March report lists different spending amounts for the month in different places in the document, which he said was likely because of a glitch in the reporting system that resulted in the $1,500 filing fee not being included in the total count later in the report. Though Price filed in February, he said the Democratic Party of Arkansas did not cash his check until March. He added that the secretary of state's campaign finance reporting system doubled some numbers in the report after it was uploaded because of a malfunction.

The secretary of state's current salary is $98,371. The position is one of the state's seven constitutional offices, which are each limited to two four-year terms.

Democratic candidates for Secretary of State

Education: Bachelor's degree in political science from Hollins University; master's of public administration and graduate certification in nonprofit management from the University of Arkansas at Little Rock.

Education: Bachelor's degree in sociology from the University of Central Arkansas.