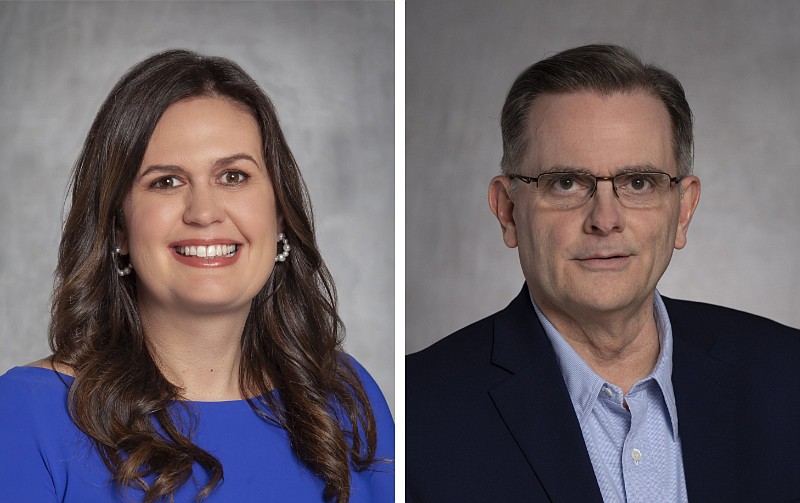 Sarah Huckabee Sanders and Doc Washburn, the two Republican candidates for Arkansas governor, are shown in this undated combination photo.

Republican gubernatorial candidate Sarah Huckabee Sanders describes herself as a conservative, a pragmatist and a reformer, while GOP opponent Doc Washburn calls himself a conservative.

Sanders said her top priorities will be education, workforce development and economic development. She also said she wants to begin phasing out the state's individual income tax.

Sanders, of Little Rock, who is a former White House press secretary for President Donald Trump and is the daughter of former Gov. Mike Huckabee, said she hopes Arkansans will give her the opportunity to serve eight years as governor. Governors serve four-year terms.

Asked whether she would depart after four years -- if elected as governor this year -- to run for higher office, she said, "I am not aware of any higher office that I would be seeking, but I have made pretty clear why I am here and what I want to do.

"If I wanted to be in Washington, I could have easily stayed there," Sanders said in an interview last week.

Washburn, of Little Rock, who is a podcaster and former talk radio host, filed to run for the Republican nomination for governor in late February.

The primary election is May 24.

The Republican nominee will take on the Democratic gubernatorial nominee and the Libertarian candidate, Ricky Dale Harrington Jr. of Pine Bluff, in the Nov. 8 general election. In January, the winner will succeed Republican Gov. Asa Hutchinson, who has served as the state's chief executive since 2015.

Sanders said voters should cast their ballots for her because "I love the people here, and I think that we can do things that help improve the lives of every Arkansan."

She said she wants her three children to want to raise their own families in Arkansas, "but I feel like if we aren't fighting for the values that matter, but also helping providing greater opportunity, then kids growing up in this state aren't going to inherit the same Arkansas that I grew up in and they are not going to have the same opportunities that I have and kids growing up at the same time as me did, and I think it is worth fighting for those things."

Washburn said voters should support him in the primary because he wants to drastically cut the size and scope of state government to get it off the taxpayers' backs.

"No more status quo," he said.

In November, Hutchinson endorsed Sanders to be his successor as governor after Rutledge departed the race.

Washburn's campaign website says he is running for the Republican nomination for governor because "Arkansans have made it clear they want an actual conservative Governor, not more of the same 'pretend' conservatism."

Asked if she would provide "pretend" conservatism as governor, Sanders said, "I find it pretty laughable that anybody could think I am anything but a conservative."

Asked about whether she would bring the status quo to the governor's office, she said, "I think anybody ... that has spent even a half-second around me or listening to me would know that I am anything but a status quo person or anything other than a rock-solid conservative."

Asked how long she believes it would take to phase out the state's individual income tax and how she would finance such a change, Sanders said, "I am not going to put like a specific timeline."

"But I do think it is a gradual process. We have to be responsible in it," she said.

"I don't think there is any one thing that allows us to do it, but there are a number of things [such as] stopping the exponential growth of government, but also at the same time growing our state's economy, looking at how we modernize and make government more efficient," Sanders said.

Washburn said he wants to eliminate the state individual income tax as quickly as possible.

"Every time you reduce taxes, you have economic growth," he said.

Washburn said he would also aim to eliminate the sales tax on used goods, including used cars, and taxes on small businesses.

"Our government is way too big," he said.

Washburn said he would have used one-third of the state's surplus funds for tax relief; one-third for a rainy-day fund; and a third for a forensic audit to find fraud, waste and abuse in state agencies.

He said he would ask for and accept each department head's resignation on the first day of his administration; impose a hiring freeze in state government for a few years; and cut 10% of all department and agencies' budgets, including education budgets.

Washburn added in a written statement: "We will make responsible (but very significant) budget cuts while focusing on these priorities: protecting our citizens, providing safe, sound infrastructure, and helping those who are unable to help themselves."

He said he believes that cutting the state's education budgets would comply with the state Supreme Court ruling in the Lake View school funding case.

The state began reviewing school funding every two years because of 2003 legislation stemming from the Arkansas Supreme Court's Lake View School District v. Huckabee decision, which found that the state's system for deciding how much money to give each school district was inadequate and inequitable.

Asked whether she believes she could cut education budgets and still comply with the state Supreme Court's ruling in the Lake View case, Sanders said, "My focus isn't on cutting, but making sure that we are actually operating and funding programs that are working.

"I think everything has to be on the table," she added.

"We have to measure what is actually producing the results we are looking for and, if it is not, then we should be willing to get rid of those things," Sanders said.

She said, "I think the foundation for everything else is access to a good, quality education, so that will be the top priority for me, and what I think has the greatest ability to have long-term transformational impact on the state."

Other top priorities include workforce development to help address the shortage of skilled workers for private industry; and economic development, including infrastructure to ensure the state has good roads, safe bridges and access to broadband across the state, she said.

"We need to focus on the basics" because only about 31% of third graders in Arkansas are reading at or above grade level, and if they are not reading at grade level or above by third grade, then there is a 70% chance of a lifetime in poverty, Sanders said.

"To me, if we are not doing everything we can to address that problem and increase the number of kids that are reading, then we are doing education wrong, " she said. "We are not getting the basics right, right now. I certainly don't think we need to be teaching kids things that they ought to be learning at home instead, and those conversations should be had by parents and not teachers."

Washburn said he wants to overhaul the state's child welfare system and require child welfare workers to wear body cameras, inform parents of their Miranda rights and not barge into homes without warrants.

He also said he would issue an executive order instructing the state Office of Long Term Care to enforce the laws on nursing homes.

Sanders said she doesn't think "critical race theory" should ever see the light of day in a school in Arkansas.

Asked how she defines critical race theory, she said that "our public schools should never indoctrinate our kids with the lie that America is a racist and evil country."

"Critical Race Theory pushes a radical left agenda that will further tear us apart, not bring us together," Sanders said.

Asked if legislation is needed to address the issue, Sanders said that "if it comes to that, [she] certainly would be prepared to do so."

Washburn said critical race theory instills in young children the idea that they are either oppressed or oppressors based on their ethnicity, and that is child abuse.

"Some educators teach CRT by other names," he said. "That is why I support the kind of legislation that Rep. Mark Lowery introduced, which would have outlawed the whole concept of teaching this horrific worldview to our impressionable youngsters."

Opponents of legislation that targets critical race theory say such bills aim to erase history and that curriculum decisions should be left to specialists and local school boards.

Asked if Arkansas needs a measure patterned after a Florida law that bars classroom discussion by public school personnel about sexual orientation or gender identity in kindergarten to third grade classes, Sanders said that "I would certainly support legislation that addresses that, if needed."

"I think it is absurd to think that we would be teaching kindergartners about anything of that nature," she said.

Washburn said Arkansas needs to enact a bill similar to Florida's law that was signed by Republican Gov. Ron DeSantis, but he wants the bill to apply to classes from kindergarten up to 12th grade.

He said he is not aware of a case in which a baby had to be killed in order to save the life of a mother.

Sanders said, "I am unapologetically pro-life across the board."

"I would not push for any exceptions," she said when asked about exceptions to save the life of the mother or in cases of rape or incest.

"Arkansas right now is the most pro-life state in the country, and I intend on keeping us there," Sanders said.

Asked whether she is interested in pursuing a Texas-style civil cause of action law in Arkansas, she said, "I think Arkansas is the most pro-life state."

"I would have to see a specific piece of legislation to determine whether or not it strengthened our pro-life status or not before I would weigh in specifically," she said.

Washburn said he would sign a bill inserting a civil cause of action provision into Arkansas' abortion law because the number of abortions dropped dramatically after Texas passed that type of bill. However, he said he would prefer to sign a bill that would outlaw all abortions.

Washburn said he opposes raising the state's minimum wage of $11 an hour because many union contracts are indexed to the minimum wage. He said he likes it when companies voluntarily raise wages to keep good employees.

Asked about raising the state's minimum wage, Sanders said, "We should be focused less on the minimum wage and instead focus on empowering Arkansans with the right education and job training opportunities to earn their maximum wage."

Washburn said there is no question that the 2020 presidential election was stolen from Trump.

"It is obvious the election was stolen," he said.

Asked whether she believes the 2020 presidential election was stolen from Trump, Sanders said, "I don't think we'll ever know the depths of how much fraud existed."

"We know there is fraud in every election," she said. "How far and wide it went, I don't think that will be something that will be ever determined. I do think that the country would be infinitely better off if Donald Trump was the president right now, and I think anything we can to do as we go into the next election cycle to strengthen our election process and provide greater election integrity is something we should be striving for."

An Associated Press investigation of the 2020 presidential election found fewer than 475 potential cases of voter fraud out of 25.5 million ballots cast in the six states where Trump and his allies disputed his loss to President Joe Biden.