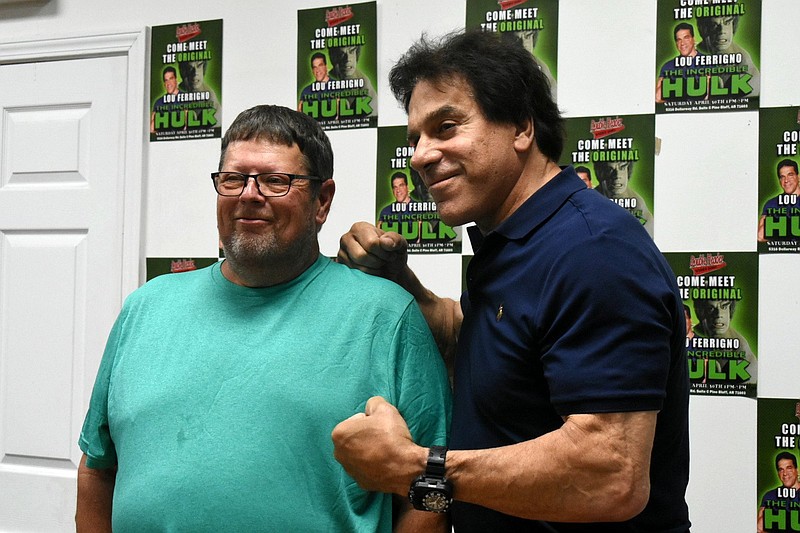 Still chiseled in muscle at age 70, the man who played television's original Incredible Hulk shined his Hollywood star on Dollarway Road at a comic book and video game store Saturday.

"I've never been in Arkansas before, especially Pine Bluff," Lou Ferrigno said. "It's great to get a chance to meet my fans. They don't get a chance to come to the Comic Convention, especially now that they get to see me in person, because it's part of me giving back because as a kid, I wish I had something like this to go to, to attend, to shake a celebrity's hand and get some positive reinforcement."

Seeing Ferrigno in person was everything Warren resident Allen Taylor, 53, thought it might be.

"I can definitely remember watching the series," Taylor said. "I'm just a Hulk fan. I like the new stuff, but nothing compares to what they had done back then."

Taylor was a boy when Ferrigno -- a two-time winner of the Mr. Universe bodybuilding title (1973-74) -- entered the homes of American prime-time viewers as the title character in a 1977 made-for-TV movie that spurred the CBS weekly drama spanning five seasons. Generations of fans lined up inside Double Header as Ferrigno took photos and autographed studio shots in commemoration of the store's 30th anniversary.

The continued popularity of the Marvel Comics franchise has grown into three NBC movies from 1988-90, two titular theatrical releases (2003's "Hulk," 2008's "The Incredible Hulk") and eight other appearances in the Marvel Cinematic Universe (last in 2021's "Shang-Chi and the Legend of the Ten Rings").

Kids as young as 8-month-old Julian Romine, who showed up with his 3-year-old brother Gus in Hulk garb and father David, 22, were introduced to the man behind the original TV version. The Hulk is Gus' second-favorite superhero only to Spider-Man, David said.

For Mark Phillips, 43, who graduated from the former Dollarway High School campus a block away, it was a chance for his 9-year-old daughter Destyni and nephews Jayden Reed, 8, and Jayden Howard, 9, to see a living legend and pose by a much bigger statue of Hulk than Ferrigno's reported 6-foot-5, 285- to 315-pound frame.

Ferrigno's relevance still resonates with younger legions of Hulk fans, even in southeast Arkansas where celebrity life happens far and in between, if at all.

"That's very [interesting] because a friend of mine told me that if the show, after a year, becomes successful, I'll be, you know, very popular, but I didn't expect like 40 years or something later ... the show, especially the Hulk, is still the most biggest, iconic character in the world."

Legend has it Dr. Bruce Banner's exposure to gamma radiation combined with a bolt of rage causes the scientist to morph into the Hulk. Banner's first name was changed to David in the TV series, and the character played by Bill Bixby grew into Ferrigno's Hulk at a moment's notice if provoked. Mark Ruffalo now plays Banner and a computer-generated Hulk with motion capture in related movies.

"I don't like how the Hulk is perceived in the last adventure movie because the Hulk needs to be hideous, and you know, like the chemistry -- like they had to be talking for example -- I think was downplayed," he said. "You don't want to mess with the original form of the series. That was 'The Incredible Hulk.' That's why a lot of people go back to the series because they appreciate that more."

Everyone also has a superhero inside themselves, as much as they connect with the Hulk, Ferrigno added.

Double Header manager Freddie Herrin said he teamed up with comic book stores in El Dorado and Sherwood to bring Ferrigno to Arkansas for a series of appearances.

"We're also working on some other people to start showing up," said Herrin, who did not divulge further details.

But he and his store seized the day with Ferrigno.

"Just iconic '80s, '70s, that's who you think of when you think of one of our first real-looking superheroes," Herrin said. "He really looked the part, whereas Batman didn't always do that. You believed in the Hulk." 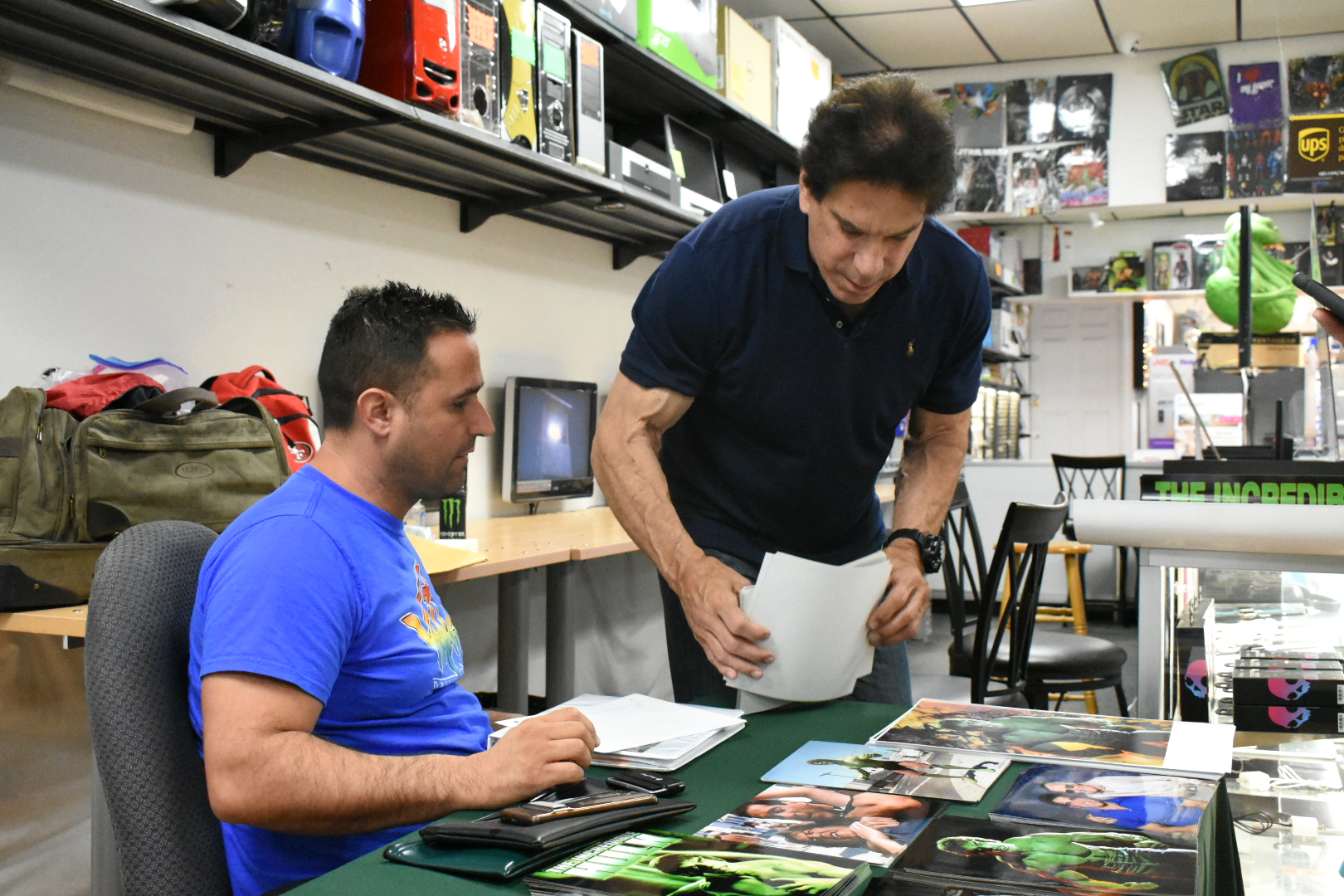 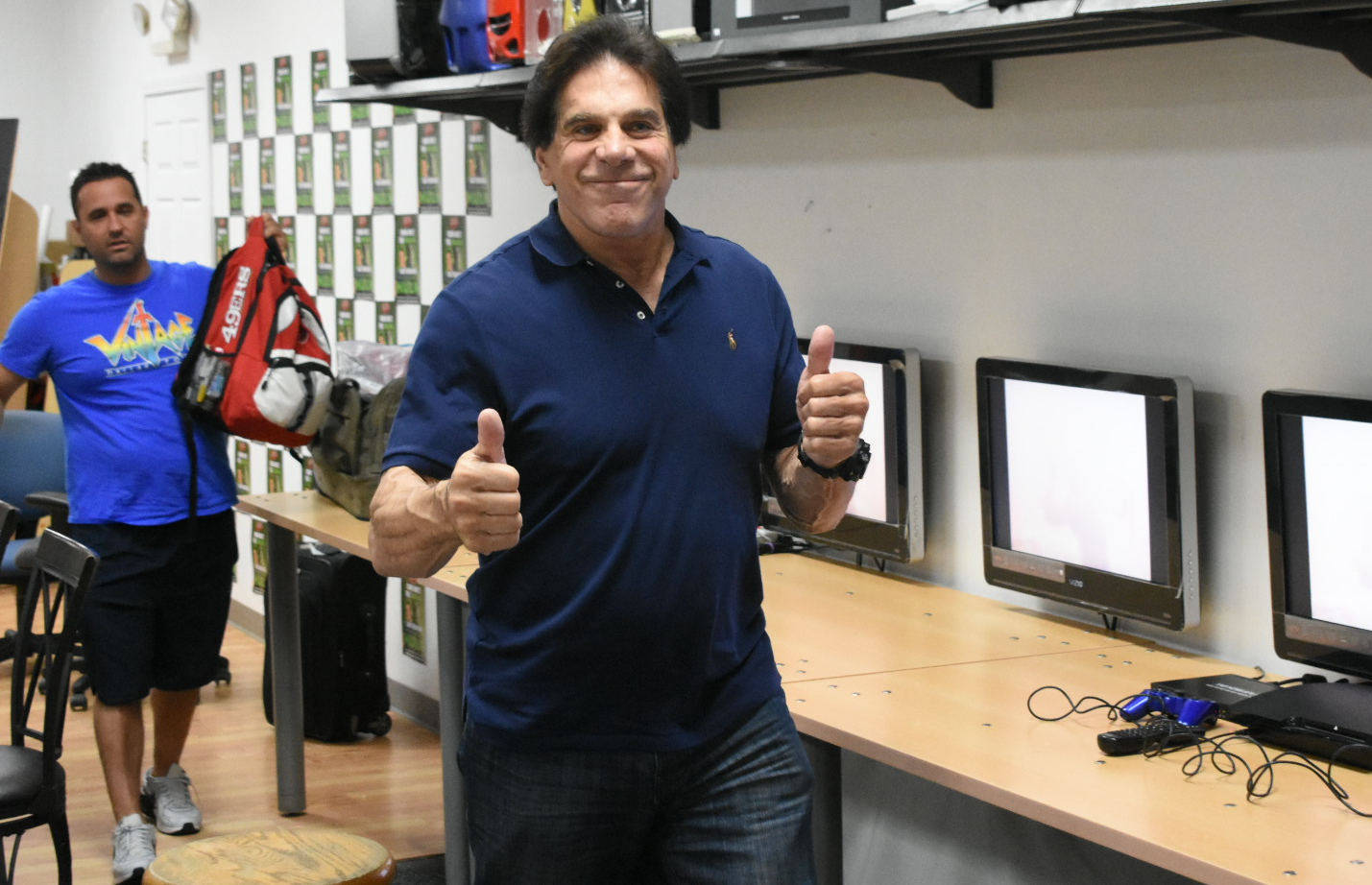 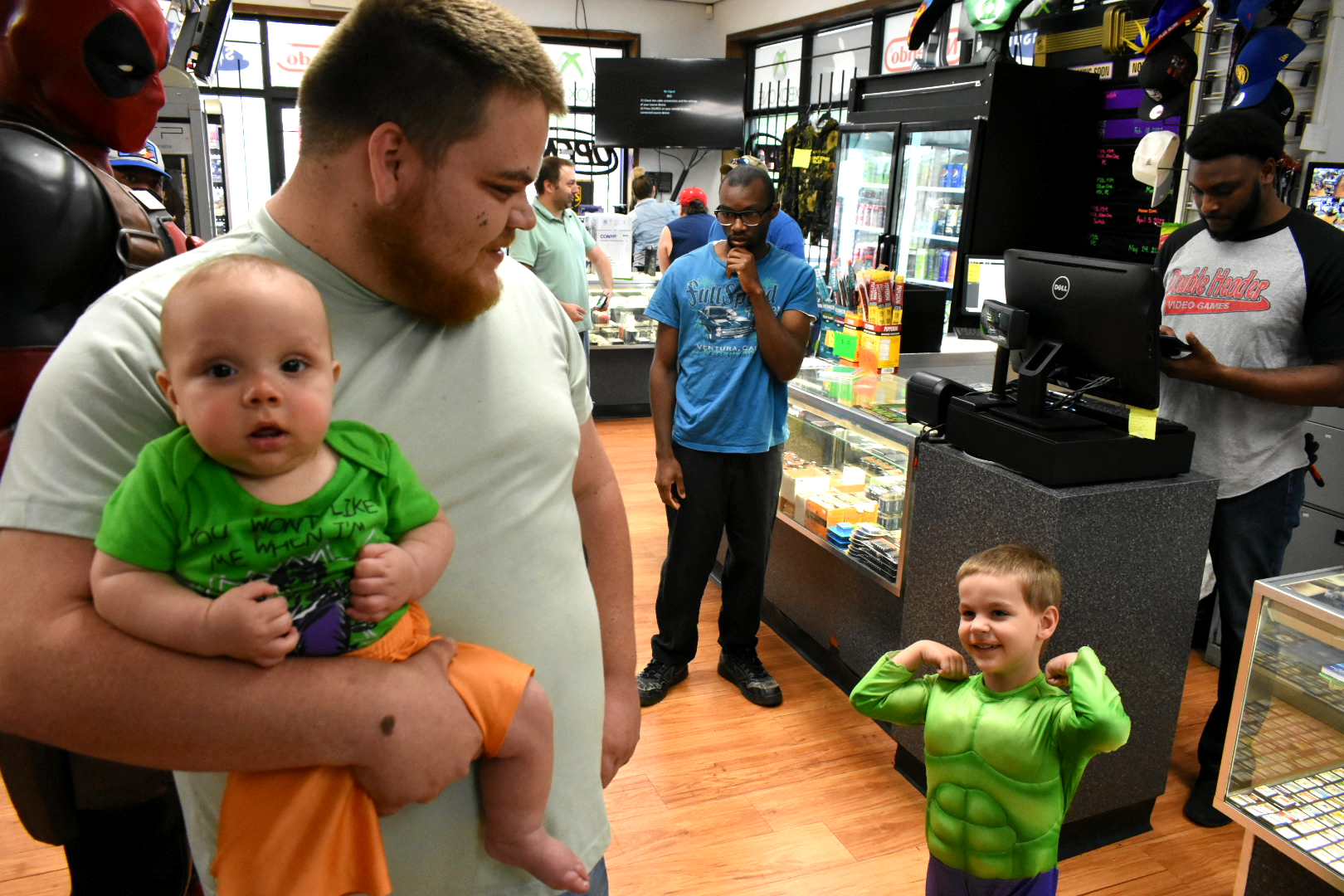 Julian Romine, 8 months, and Gus Romine, 3, are dressed in The Incredible Hulk gear as they wait with their father David Romine, 22, to meet the original TV actor of the character, Lou Ferrigno, at Double Header comic book and video game store in Pine Bluff on Saturday, April 30, 2022. (Pine Bluff Commercial/I.C. Murrell) 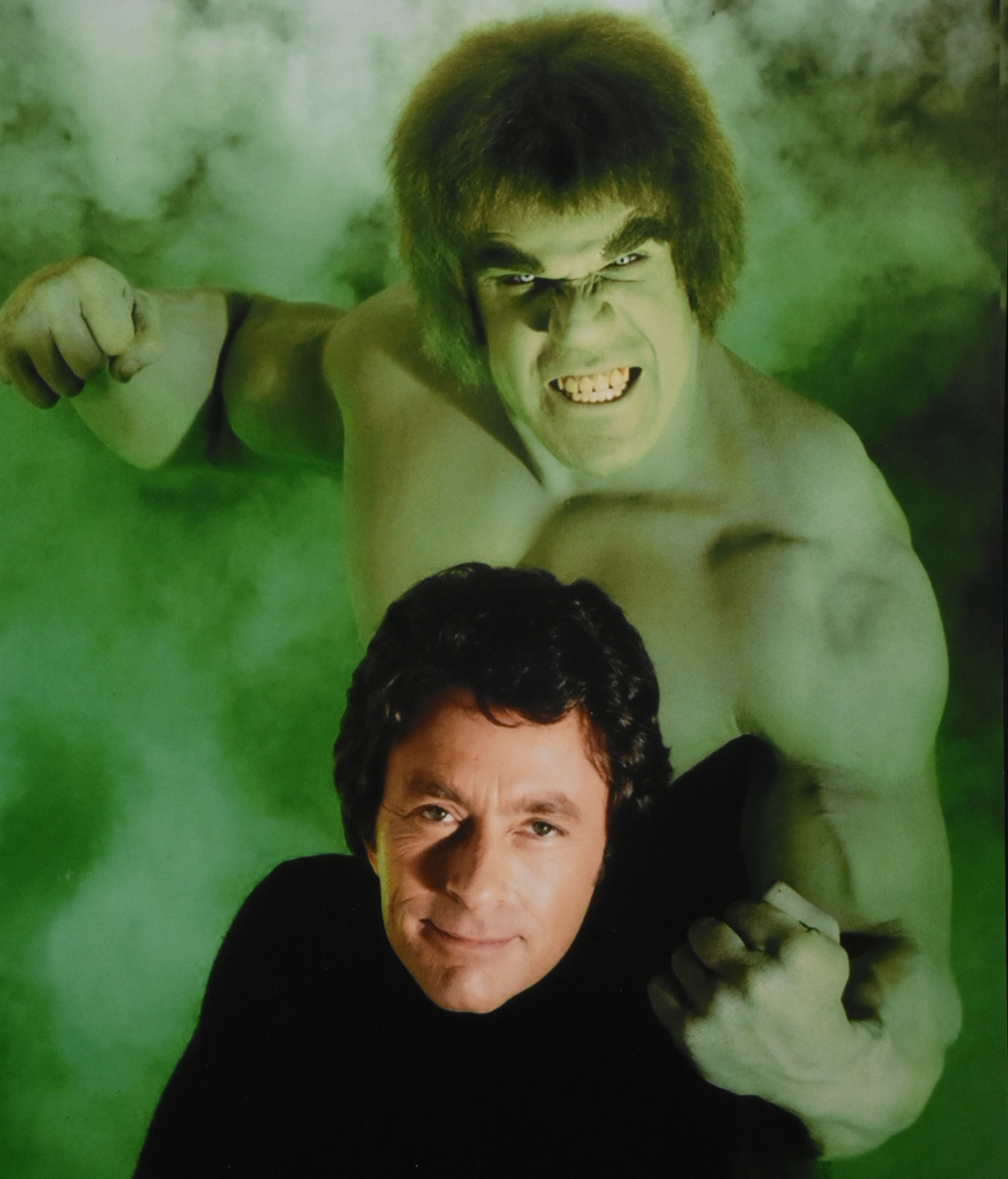 A studio photograph of Lou Ferrigno as title character The Incredible Hulk with Bill Bixby, who played David Banner on the TV series that aired from 1977-82 (and again in made-for-TV movies from 1988-90). (Special to The Commercial/Courtesy of Lou Ferrigno) 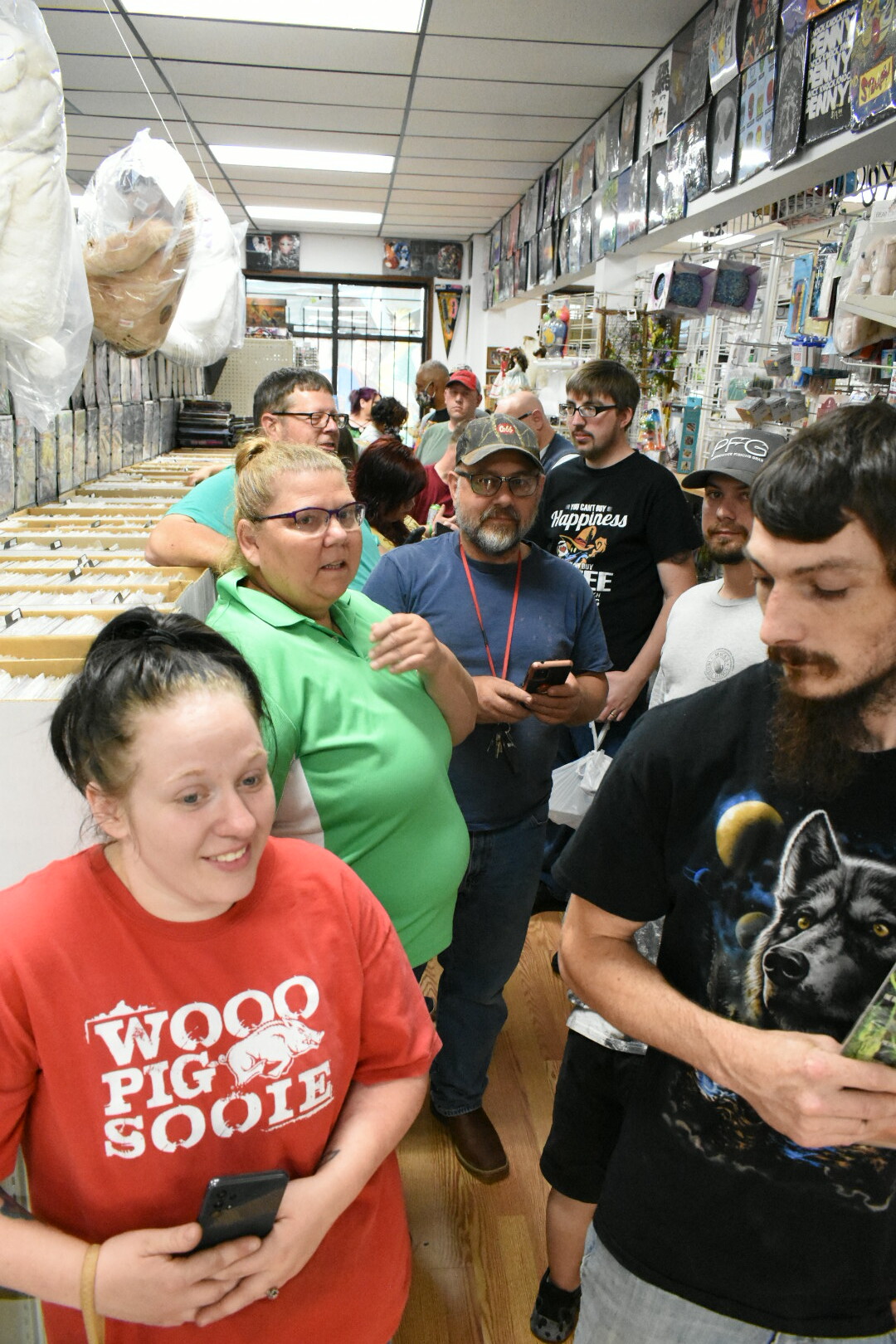 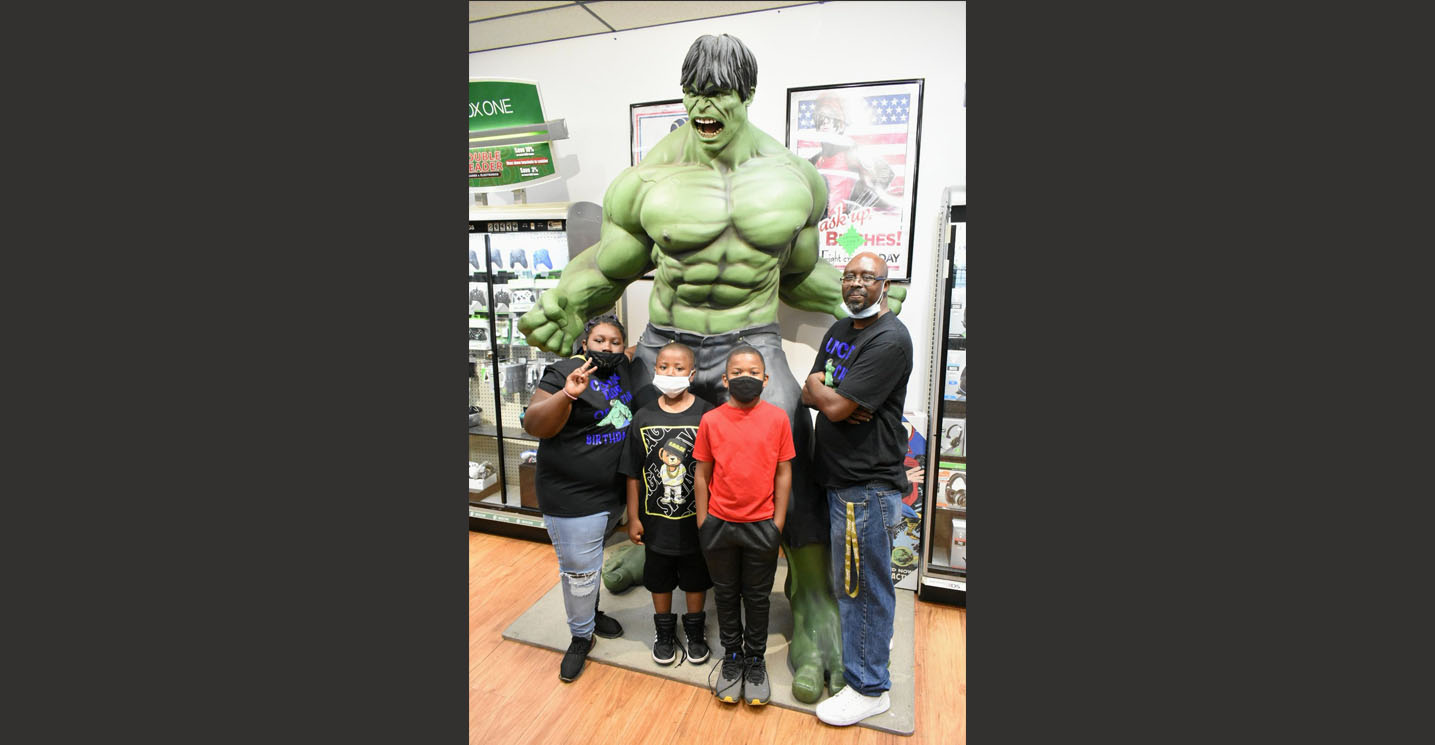