State likely to see more supercells if storm distribution shifts by Will Langhorne | May 1, 2022 at 3:43 a.m. 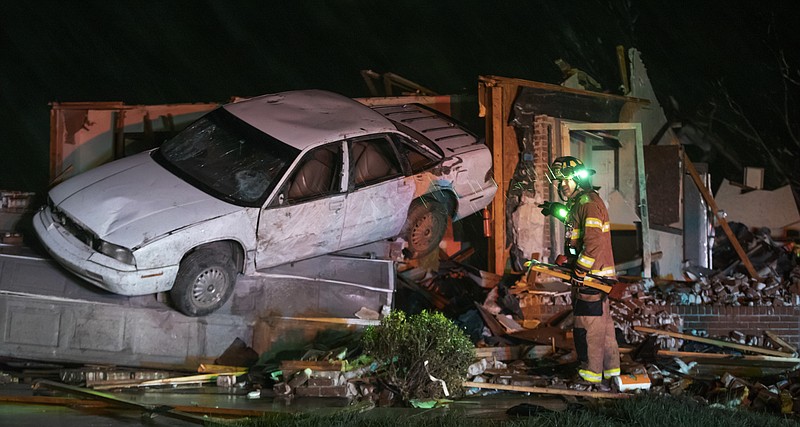 A Wichita, Kan., firefighter searches a home in Andover, Kan., Friday, April 29, 2022, after a tornado ripped through the area just east of Wichita. (Travis Heying/The Wichita Eagle via AP)

Climate change will likely drive an increase in severe tornadoes in Arkansas by the end of the century, emerging research suggests.

Researchers from Northern Illinois University concluded in a recently presented study that Arkansas and other southeastern states could see more supercells, or storms capable of producing tornadoes and hail, in the coming decades.

"I don't want to suggest that Arkansas is going to become the preeminent tornado place in the world, but certainly all signs point to you're going to see an increase in events," said Walker Ashley, a Northern Illinois University meteorology professor.

The predicted changes in storm distribution share a correlation with prior research that concluded that strong tornadoes have already become more common in portions of the Midwest and Southeast.

While the study is still under peer review, Ashley and his colleagues presented their findings to the American Meteorological Society in January.

The team generated its predictions by feeding climate scenarios into weather models. Ashley suspected that a rise in moisture and atmospheric instability -- two of the four fundamental ingredients supportive of supercells -- are likely responsible for the increase in storms forecast by the models.

As temperatures climb, evaporation from large bodies of water will increase, adding moisture to the air. More heat will also make it easier for air to rise, generating more atmospheric instability, according to Ashley.

"Those [factors] are predicted to increase particularly in the eastern two-thirds of the U.S.," he said.

Great Plains states, which have historically seen more tornadoes than their eastern neighbors, are likely to see fewer supercells and possibly tornadoes in the coming century, according to the study.

The warm layer of air that blows in from the desert Southwest eastward across the Great Plains and rises above moist air from the Gulf of Mexico will likely become hotter in the coming decades. As the temperature of this layer increases, it will likely suppress more storms, Ashley said.

The researchers used two climate predictions -- a "middle of the road" scenario and an "extreme pessimistic" scenario -- to feed their weather models. Two scenarios are informed by predictions of greenhouse gas emissions in the coming decades.

Of the two climate predictions, Ashley considers the "middle of the road" outcome to be the most plausible. But he noted that a more extreme climate change scenario could be possible given that there is a lot that scientists still do not know about the climate system, as it is very complex and difficult to study.

"There's a lot of stuff in the climate system that we don't understand. There are feedback cycles where if we suddenly do this, then it might have repercussions that we have not even bothered to think about," he said.

Though the changes in supercell distribution were more pronounced when models were driven by the "extreme pessimistic scenario," both scenarios predicted storms would become more frequent in southeastern states and less common in Great Plains states, including Kansas, Nebraska and South Dakota.

While Ashley expects to receive feedback on the study in the next couple of weeks, he said it can be difficult to predict how long the peer review process will take.

Along with the predicted increase in supercells, Arkansas is likely to see its cities and towns swell by the turn of the century. The state's population is predicted to grow by roughly 700,000 in the next 40 years alone, according to the Arkansas Economic Development Institute.

This means the probability of a tornado hitting a populated area and causing more deaths and damage is likely to increase.

Referring to a previous study he conducted with colleagues, Ashley said his research indicates that sprawl and increases in exposure will lead to more disaster effects than any increase in magnitude or frequency of severe storms.

"Even if you don't change the number of tornadoes ... you're increasing the odds of disaster because we put more people and more things in the way of these events," he said.

Ashley pointed to the EF5 tornado that devastated Joplin, Mo., in 2011 as the type of event that is likely to become more common if population centers grow and if supercells increase in the Southeast as the researchers predicted.

Since 1950, meteorologists have reported more than 2,000 tornadoes in Arkansas. The storms have resulted in nearly 400 deaths and caused more than $3 billion in property damage, according to an Arkansas Democrat-Gazette analysis of data from the National Oceanic and Atmospheric Administration.

Last week marked the anniversary of some of the deadliest Arkansas tornadoes in recent history.

The largest and most costly tornado outbreak to hit the southeastern U.S. began 11 years ago on Monday. That day, 18 tornadoes tore through Arkansas, killing five people in Vilonia.

Wednesday marked the eight-year anniversary of an EF4 tornado that tracked 41 miles through Central Arkansas, causing significant damage in Mayflower and Vilonia and killing 16 people, according to the National Weather Service.

The study forecasting a rise in supercells in Arkansas followed earlier research from Northern Illinois University, which concluded that strong tornadoes and environmental conditions supportive of these tornadoes have already become more frequent in portions of the Midwest and Southeast.

The retrospective study also concluded that favorable conditions and strong tornadoes in the Great Plains have become less common in recent decades.

While the changes in frequency are significant, Victor Gensini, a Northern Illinois University meteorology professor, said the research does not imply that severe tornadoes are only threatening the mid-South and are no longer causing damage in western states.

Although the trends line up neatly with the climate model predictions, researchers were unable to determine if emissions were driving the historical data.

"This is definitely consistent with climate change, we just don't have a way right now to create a causal link between that right now," Gensini said.

Brian Smith, a senior forecaster at the National Weather Service in North Little Rock, acknowledged there was validity to studies showing spatial changes in tornado occurrence but cautioned that improvements in technology and methods used to detect tornadoes could complicate research based on historical data.

As means of detection became increasingly sophisticated, meteorologists were able to record more tornadoes, which could give the misleading impression that tornadoes have become more frequent.

Changes in population density over time may have also affected which tornadoes the meteorologists detected. A tornado spawned in the 20th century, for example, would be more likely to hit a sparsely populated area than one formed in the 21st century. The earlier tornado would thus be less likely to appear in records.

"You can analyze data and look at trends, but sometimes it just does not tell the whole story," Smith said.

Gensini recognized the limitations of the historical data but said the retrospective study focused on severe tornadoes, which meteorologists were likely to detect even without the latest technology. Researchers also bolstered their conclusions by studying the changes in environmental conditions supportive of tornadoes, though the two variables didn't always match up perfectly.

Having predicted supercell distributions for the coming century, the researchers are working to forecast how these distributions might change in the next couple of decades.

"We're looking at the middle part of the century, which is obviously of more interest to most of us because we'll still be alive," Ashley said.

Ashley was unsure of what this coming study would show, given the mountains of data the models were processing.

While the predictions might encourage Arkansans to improve the tornado resiliency of their communities, Ashley said the best way to inspire local change is by studying how hard-hit cities like Joplin and Greensburg, Kan., have rebuilt.

Many communities could prepare for coming storms by investing in emergency managers, Ashley said. Local governments often delegate this role to a police or fire department chief. In other communities, emergency manager positions are sometimes underfunded.

Selvam recognized that many Arkansans living in poorly engineered structures might not be able to afford building upgrades. To protect these residents, Selvam and his colleagues have considered studying how low-cost walls erected around vulnerable structures could mitigate tornado winds. The researchers have yet to find the funding to carry out these studies.

While preparing for stronger tornadoes might require policymakers and residents to look decades into the future, Ashley said building resiliency is critical.

"There are so many close calls every year," he said. "One day, it'll happen. There's going to be a $10 billion tornado. Let's just hope it's not Little Rock or Fayetteville."