By our reckoning, Paris and Dublin will turn 14 years old this week.

May 5 is their designated birthday--Cinco de Mayo--because it's easy to remember and a good guess based on when we took them home with us back in 2008, when George W. Bush was still president and Tiger Woods seemed a shoo-in to break Jack Nicklaus' record of 18 professional majors.

My buddy Bork died on June 11, 2008, the day before play started in the 2008 U.S. Open, the one Tiger Woods--suffering from two stress fractures in his left leg and a torn ACL--would win in an 18-hole playoff with Rocco Mediate. Woods was 32, and that was his 14th major title. He wouldn't win another one until the 2019 Masters. If he ever does it again, it will be one of those sports miracles that happen now and then.

Bork was born April 29, 1993. We acquired him five weeks later; he was with us just about 15 years. His death was not a tragedy; he was an old dog who had lived a long and pampered life. He liked ribeye and milkshakes, and went for long and famous walks, and when he could no longer walk we put him in a Radio Flyer wagon and rolled him up and down the streets of Hillcrest so his public could see him and be reassured. He had many friends, and only a few anxieties.

Bork's "brother" Coal died Aug. 1, 2006; he was born on Nov. 9, 1991. He did not quite make 15, but he was a large dog, 110 pounds at his heaviest and around 95 for most of his life. Coalie was a stubborn and glorious animal, who once chased and fetched a tennis ball more than 200 times, shaming me when I finally retired. He loved Karen more than supper and was an eater, his appetite made keener by the anti-seizure drugs that kept him from flailing and kicking and breaking things.

We adopted Sherpa in 1998 and she was with us until 2012; a strange and sweet and often bewildered thing. We took her home on an impulse. She was pretty and needed someone; her rescuers told us they believed she'd been abused. She never really warmed to me, perhaps because she'd been hurt by something that looked like me, and it was hard. She ran from me once and when I cornered her she snapped--a slow- motion parody of aggression really, like Fred Sanford jabbing at his dummy son Lamont.

I remember walking her to the groomer's once and her balking and lagging so pointedly that a guy on a construction crew hooted, "Hey, mister; she don't want to go with you!"

But she was always glad to see me when I came to fetch her from the groomers; and once when we were having some renovations done on our house and the crew made something go boom, she ran into my office and leapt into my lap, and we sat there and looked at one another for a moment. We worked out an arrangement, me and my mad Sherpa--we both tried hard and did the best we could for each other.

She was there when we brought Paris and Dublin home. She showed them how to use the dog door. They trundled after her. She seemed proud of them. They were a kind of gift to her in her dotage. I think they remember.

Sherpa was demented but otherwise healthy when Bork died; she was no more shy with a dog sitter than she was with us. She had a cattish indifference to our presence. She liked Karen and side-eyed me, but seemed happiest sitting in the yard, watching squirrels raid her kibble bowl.

We thought we might take a real vacation in the wake of Bork's passing--we'd had a couple of years of aged, infirm animals who we didn't think we could leave for more than a day or two. We'd taken four-day trips to Paris. It seemed we were always running home to check on our dogs. And suddenly, there were no dogs that seemed to require us.

Then Karen searched for puppies on petfinder.com.

She typed in certain parameters and a photograph came up: a litter of four puppies--two brown, two black terrier mixes, all female--rescued from a box beside a dumpster in a Waffle House parking lot. "The scruffy bunch," someone had tagged it.

A week or so later we went to Petsmart to meet the pups and apply to take them home. Carl, the rescuer, handed me a little brown dog who would become Paris. "This one is the boss," he said, and he was right. We chose what we guessed was the healthier of the black ones to be Dublin.

I think the other two sisters were adopted separately, but I do not know for sure. I'd like to think that somewhere out there there's another set, a kind of bizarro Paris and Dublin that we might meet by chance on one of our walks. But that hasn't happened, so it's unlikely that it ever will.

Our girls seem healthy; Paris and Dublin dutifully walk every day. And Audi--who will soon have been with us a decade--is still mistaken for a puppy. Smaller dogs live longer, and are easier to scoop up. Our next round, and there will be a next round, will be smaller still. All the big-dog chauvinsm I once held has been undone by these smart and sparkling animals. They aren't nervous, they aren't yappy, they are in some ways cannier and more empathetic than any dogs we've ever known.

They have character. Four working eyes between three dogs. Paris, who has two eyes, seems not to be able to hear around corners and is unable to digest some food now. She's fine with kibble and canned dog food and morsels of chicken and beef but, though she loves them, she cannot keep down carrots or many other vegetables. We once worried that her inclination to gourmandism would be a problem--our vet warned us he didn't want to see a 30-pound Paris--but now we worry about her maintaining her weight. (She's been holding steady at 16.5 pounds for a while now.)

Dublin can't see or hear very well, but that hasn't dampened her enthusiasm or ferocity for life. Audi is afraid of storms but otherwise untroubled and uncommonly interested in human beings. She's a perfect therapy animal who was left somewhat bereft by the covid-19 pandemic until Karen started taking her into the newsroom a couple days a week.

And we are still discovering things about each other. Paris, and sometimes Audi, have determined that, if they gather by the garage door about an hour after Karen has gone out on a bike ride and bark, they are able to conjure her re-appearance. Sometimes it takes a few minutes, but they always manage to produce her.

There is so much I don't know, and more that I don't trust. But what these old dogs and I share is authentic and deep and most of all mutual. It might as well be love. 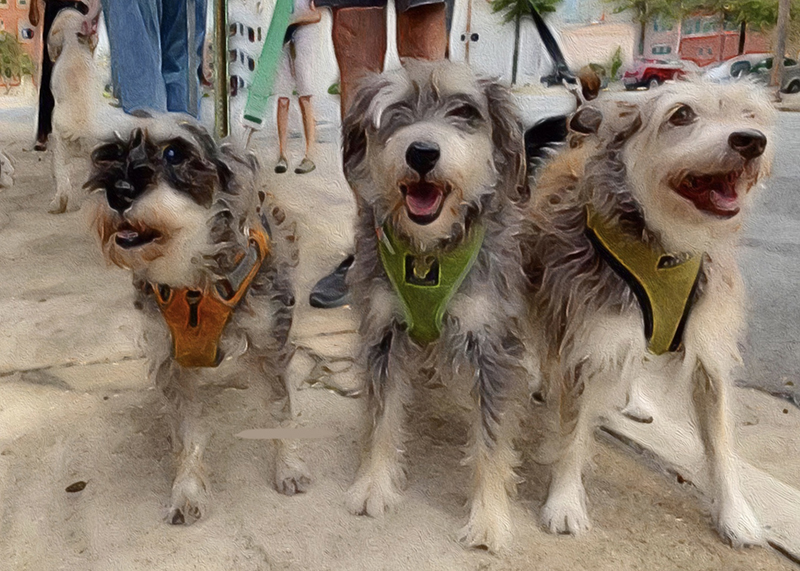