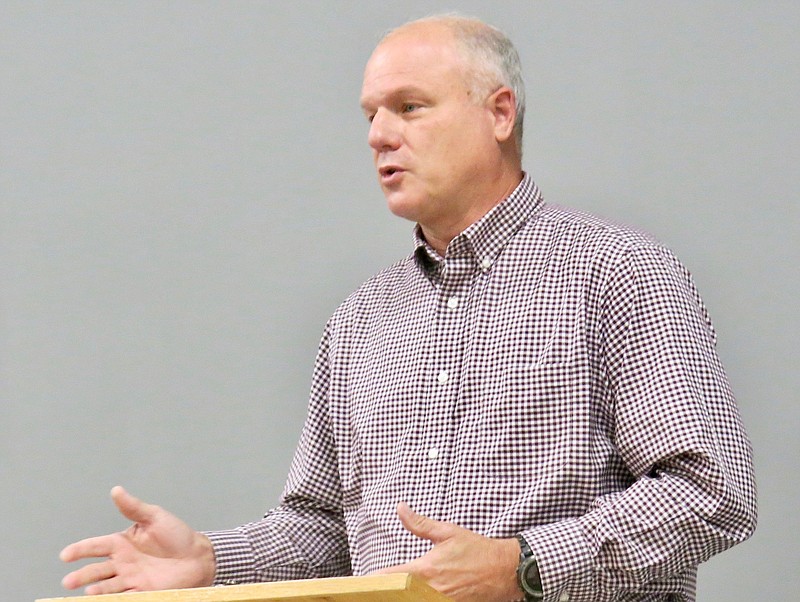 Arkansans who want less partisanship in their state government need to be willing to vote in major-party primaries, the leaders of the Bentonville-based nonprofit group Common Ground Arkansas said.

"Eighty-five percent of elections for the Legislature will be decided by May," said Sen. Jim Hendren, I-Sulphur Springs and the group's founder. "If you wait to vote in November, it's too late."

"Voting in November is like showing up Tuesday for Monday night's football game."

With few voters showing up for primaries -- less than 19% in nonpresidential election years like this one, according to state election records -- candidates are picked by a small number of the most partisan voters, Hendren said.

Common Ground, formed in March 2021, created a webpage showing each county's contested primary races, from state legislators to the county quorum courts. The goal is to show voters at a glance which primaries dominate their counties' politics. The group is putting resources into encouraging people to vote in whichever primary matters most in their county, said Misty Orpin, the group's executive director.

Republicans in Arkansas had to vote in Democratic primaries for years to have any influence over local and legislative politics, Hendren said. Democrats won the majority in the state House of Representatives in every election from 1874 to 2010, state election records show.

Hendren left the Republican Party last year and started Common Ground. He entered state politics in 1994 as a Republican. He was elected to the House as one of 13 Republicans in the 100-member chamber. Republicans won majorities in the House and Senate in 2012, state election records show.

Hendren became president of the 35-member Senate before declaring himself an independent. He later announced that he would not run for another Senate term.

Other groups in the state have worked to increase voter participation, but Common Ground Arkansas is the only one led by a former member of the majority Republican Party who left, declared himself an independent and formed a group to reduce partisanship.

Leaders of the state's two largest political parties said they have not observed any effects of Common Ground's efforts so far.

"I don't see how electing more Republicans is going to change the Republican Party," said Grant Tennille, chairman of the state Democratic Party. Most counties are majority Republican, so asking more voters to vote Republican will not help, he said. What the state needs is a more competitive two-party system, he said. Democratic strategy in recruiting and supporting the party's candidates did not change, he said.

Common Ground has not changed the Republican Party of Arkansas' plans either, said Executive Director Sarah Jo Reynolds. "To my knowledge, they only have a handful of candidates they support," she said of Common Ground.

The party's role in elections is after the primary, she said. "We can't take a side in primaries," she said. The party supports Republican nominees once the primaries are over, she said.

But Arkansas is one of the nine states in which an approach like Common Ground's could work, according to an article published Thursday by the University of Virginia's Center for Politics. The center publishes "Sabato's Crystal Ball," an influential newsletter and election forecaster.

The University of Virginia article did not mention Common Ground by name, but it laid out a primary voter turnout strategy matching the one described by Hendren and Orpin.

Voters can choose primary ballots in Arkansas, which is an "open primary" state. Every voter who goes to the May 24 primary can ask for either a Republican or Democratic ballot, even if he is a registered member of the other party.

"What does the minority party gain by consistently failing to crack 40% of the vote and yet, by continuing to run candidates, effectively empowering the dominant party's ideological fringe to choose their state's next governor or senator?" asks the university's article, "How Minority Parties (Might) Compete in One-Party States."

"Voters in the minority party may not love casting a ballot for a member of the other party, but given their own party's difficulty winning in these states, having a moderate win the general election rather than an extremist would benefit the minority party on the policy front."

Even if primary voter participation goes up, whether it would change the course of state politics is not known, said Janine Parry, professor of political science at the University of Arkansas, Fayetteville.

"It's certainly what fully enfranchised Republicans did for more than 100 years, if they didn't wish to sit elections out," Parry said Friday. "In nearly every county, for all but city and school district elections, the winner was decided in the Democratic primary. So, it surely happened many thousands of times. But whether that changed the course of politics at some point? Impossible to say."

What Common Ground is trying to do is admirable, but difficult, said John Opdycke, president of Open Primaries, a New York City-based group that opposes voters being forced to register to a political party before they can vote in primaries.

"People generally don't like to vote in ways that are so surgical," Opdycke said. "The problems with partisan primaries is that people have to choose which candidates they support that they get to vote for," Opdycke said. If someone supports a Democrat for the legislature but also supports a Republican primary contender for governor, that voter must choose which candidate to give up.

The only thing proven to drive up primary voter participation are "top-two" primaries and similar systems, Opdycke said. That system has every candidate, regardless of party, appear on the primary ballot. The top two candidates advance to the general election.

Neither Hendren nor Orpin would discuss details of their organization's budget or staffing. The paper trail for Common Ground is scant so far, state and federal records show. The group has made no direct contributions to candidates campaigns, Hendren and Orpin said and according to the Secretary of State's campaign finance reports. Those reports require disclosure of both monetary and in-kind contributions such as consulting or polling a choice between candidates. The Secretary of State's records do show Common Ground Arkansas Inc. was formed by Hendren on March 1, 2021.

Common Ground has filed no tax forms with the Internal Revenue Service, according to that federal agency's database. The group formed and began activities too recently to file any such forms yet, Orpin said. Common Ground is a 501c4 nonprofit group, she said. That classification is an IRS category that allows an organization "to promote social welfare," according to the IRS website. According to federal tax code, the classification includes organizations "operated exclusively for the promotion of social welfare." Prominent 501c4 organizations include the AARP and the National Rifle Association.

When about 15% of voters pick the primary winners out of 100 state House seats and 35 state Senate seats, those races are often decided by fewer than 100 votes, Hendren said. Not many voters, percentage-wise, would have to come to primaries to make these contests more mainstream, Hendren and Orpin said.

"Only 15% of voters who are eligible vote in primaries, which means the 7 or 8% -- the majority in those primaries -- are picking all the candidates," Hendren said. "Those 7 or 8% are running the state's politics, and they are the extreme." This is true for both Republican and Democratic primary voters, he said.

This year's primary will determine who automatically shows up on the November general election ballot. Only political parties who fielded a candidate for governor who garnered at least 3% of the vote get to place their candidate's names on general election ballots. Only Democrats, Libertarians and Republicans meet those requirement in this year's elections. There are no Libertarian or independent members of the state House. Hendren, who was elected as a Republican, is the only state senator who is an independent.

Parties themselves are not making a push to increase participation in their primaries, Hendren said.

"If your strategy is based on low voter participation, your strategy is not based on what's best for your district," Hendren said. "You're trying to game the system. All you have to do is throw red meat to 5% or 6% of the voters when there's 90,000 people in your district." Arkansas state Senate districts were redrawn last year to have close to 86,107 people in each, using 2020 U.S. Census figures. "Red meat" refers to narrow issues that appeal to the most partisan voters.

Orpin agreed: "Seven or 8% isn't representative. That's a club, and they don't want to add any new members to the club."

The last four regular elections altogether saw legislative seats come up 470 times. According to state election records, 158 legislative races had a choice remaining between a Republican and a Democrat on the November ballots. Of those 158 general election contests, only 45 were won with the winners carrying less than 55% of the vote.

Common Ground analyzed this year's primary contests in each county in Arkansas, counting state legislative and local races. Only seven counties of the 75 in Arkansas have local ballot choices dominated by Democrats, according to Common Ground's analysis: Crittenden, Desha, Jefferson, Lee, Phillips, St. Francis and Yell.

Pulaski County, the state's most populous, is split with seven contested races in each major party's primary. Fifty-five counties have no Democratic contested primaries whatsoever, according to Common Ground's figures.

The primary contest information for each county is available at Common Ground's "PIC" webpage, or Personal Impact Calculator. The page is designed to let any voter look at contested races in his home county and see the choices in each primary. The site does not include third-party or independent candidates.

Common Ground has bought online advertising to make voters aware of the calculator and other information about voting in primaries, Orpin said. When people use a search engine to look up candidates or voting-related information in Arkansas, they may see a advertised link to the group's information, she said.

The group also helps visitors to its website navigate legislative records and the state's extensive library of legislators in committees so voters can hold lawmakers accountable after the elections, Orpin said. The group can also go low-tech: An airplane towing a banner asking "Y'all Registered?" to vote circled Razorback Stadium during the Garth Brooks concert on April 23, they said.

The next day was the deadline to register to vote in the primaries.