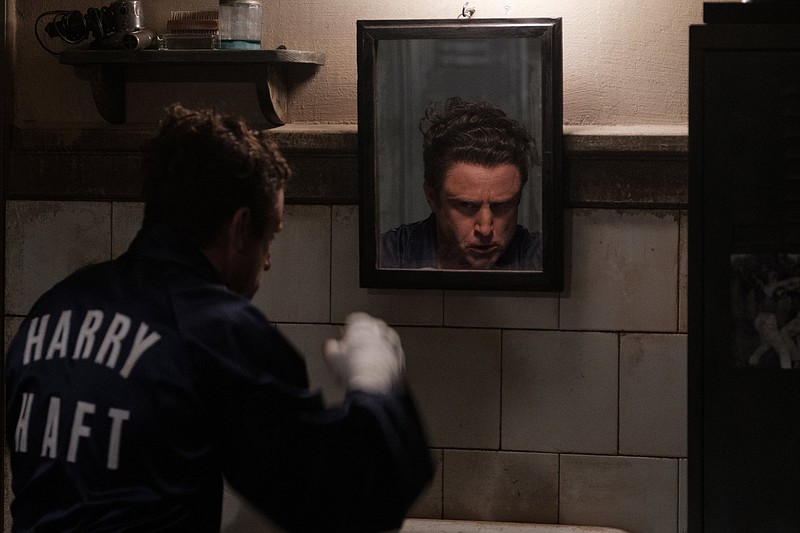 Ben Foster plays Harry Haft in HBO’s “The Survivor.” President Joe Biden and first lady Jill Biden were set to host their first official film screening at the White House on Thursday, with plans to show the movie in the White House theater on the ground floor of the East Wing. (HBO via AP/Jessica Kourkounis)

LOS ANGELES — In "The Survivor," filmmaker Barry Levinson reaches back 80 years to tell the grueling story of a boxer who put the lives of fellow concentration camp prisoners at risk to save his own.

The moral and psychological repercussions for Harry Haft are why Levinson, the Oscar-winning director of "Rain Man," was drawn to the project based on a book about Haft's Holocaust ordeal written by his son, Alan Scott Haft.

"This is not about the life of somebody in a camp. It's the fragments of what happened in the camp, and what happened there to survive," Levinson said. "Now he's trying to get on with life and struggling with it."

"The Survivor," starring Ben Foster, is now streaming on HBO.

The film, written by Justine Juel Gillmer ("The 100"), dramatizes Haft's experience in Auschwitz, a central part of the Nazi death camp system. An estimated 1.3 million people were deported to Auschwitz in German-occupied Poland and at least 1.1 million died, according to its museum and memorial website.

A teenager when arrested, Haft is among those kept alive as slave labor, held under horrific conditions and given tasks, including the disposal of bodies. Always ready with his fists, Haft is given the chance to take part in boxing matches, becoming an amusement and source of betting income for German officers.

As depicted in the film, the champion goes on to fight again; the loser's fate is likely death. Haft is driven to prevail in the ring by love — he longs to be reunited with Leah, his childhood sweetheart. Convinced she will somehow survive imprisonment and the war, he lets nothing stand in his way to do the same.

While Haft's Holocaust experience is a brief part of "The Survivor," Levinson said, it permeates it "because in his head he can't let it go." The story follows Haft as he begins life anew in America, pursues a boxing career and starts a family, even as he continues to search for his lost love.

The University of Southern California's Shoah Foundation was a historical consultant on the production and provided a videotaped interview with Haft, preserved in the foundation's archives. He died in 2007, at age 82.

Vicky Krieps, Peter Sarsgaard, Danny DeVito and John Leguizamo co-star in "The Survivor," which reunites Levinson and Foster, whose first film role was in the director's "Liberty Heights."

Foster, whose other films include "Hell or High Water" and "X-Men: The Last Stand," met the demands of playing Haft from the skin in. He's unrecognizable in the part.

"I just don't think I could live with myself if I had shown up and lost 15 pounds, when you scratch the surface of any kind of research on this (the Holocaust) and look at these human beings who are reduced to bone," he said. As he was learning to box, the actor said, he also wanted to discover how thin he could get and still fight.

"It was a strange, obsessive need to know my own limits, rather than check ... a box of, 'Actor lost weight, good,' or 'Actor gained weight, good,'" he said. He was so fully immersed in the tormented Haft and his world — including putting Holocaust and Auschwitz photos on the wall — that he found it hard to shake off the set.

"It was important for me to be able to close my eyes and see what was chasing him ... I suppose it works if you're having nightmares. I suppose you're doing your job, if you're having that person's dreams," he said. "The landing wasn't perhaps as graceful as possible. Thank God for my wife (actor Laura Prepon)."

In the afterword to 2006's "Harry Haft: Survivor of Auschwitz, Challenger of Rocky Marciano," Alan Haft, the eldest of three children, says his father wanted to share his story and had pushed him to write the book.

"He could never escape the memories of his years in the concentration camps. He lived with nightmares his entire life," often threatening suicide in the face of a personal or family crisis, his son wrote.

Haft's suffering and that of other victims of conflict would eventually be labeled post-traumatic stress disorder, Levinson said. He cites a current tragedy in Europe that will undoubtedly leave its mark.

Russia invaded Ukraine on Feb. 24. Since then, cities have turned into ruin and bodies have been found in the streets and in mass graves. Some Ukrainians have hunkered down as the war continues to grind, while nearly 5.2 million have sought safety in other countries.