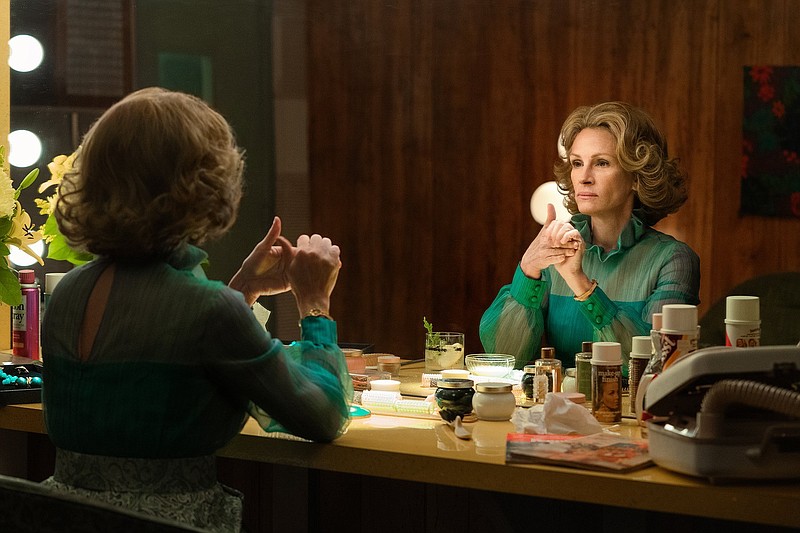 Julia Roberts stars as Martha Mitchell in a scene from “Gaslit,” a new Starz miniseries that takes an insider’s look at Watergate. (Starz/Hilary Bronwyn Gayle)

In the years before her death in 1976, just four years after the Watergate break-in, Martha Mitchell was more famous than Henry Kissinger. The spouses of attorneys general, then and now, tend to shrink from the cameras rather than run toward them. But the Arkansas native, nicknamed "the Mouth of the South," wouldn't have it any other way.

She made the talk-show rounds, sometimes publicly disagreeing with the Richard Nixon administration, from which her husband was eventually fired. Even after scandal broke out, John Mitchell stayed loyal to the president, but Martha saw no reason for that. She was Watergate's Cassandra, and duly paid the price.

And then she was mostly forgotten. The hit podcast "Slow Burn," which retraced the conspiracy and cover-up that led to Nixon's resignation, revived her story for Trump-era listeners and now serves as the inspiration for the new miniseries "Gaslit," starring Julia Roberts as Martha. ("Gaslit" airs at 7 p.m. Sundays on Starz.) Nixon himself never appears, except on television.

At a media event in March, Stevens said that "Gaslit" means to tell the "human stories" behind Watergate. In nearly every aspect of that attempt, it fails. With Martha as the lone exception, the characters are cardboard cutouts or cartoon villains. (Two marriages form the emotional crux of the show, but I couldn't tell you why either couple ever got together.) The series has been described as a political thriller, but it's got so much flab and filler that it seems ideologically opposed to the very idea of suspense. Whenever Martha's not onscreen, it's closer to a black comedy — the men behind the plot portrayed as bumbling, delusional fools — except it's flailingly unfunny.

"Gaslit" begins several months before the break-in, with Mitchell still Nixon's AG and Martha on TV, presented as "one of the most outspoken conservatives in Washington." But the show never really conveys her beliefs — one of many soft-pedalings from creator Robbie Pickering to render his protagonist sympathetic. (In a posthumous remembrance, writer Myra MacPherson recalls the time that the real-life Mitchell called the Cambodian theater of the Vietnam War "100% wonderful." The series merely notes her public opposition to the war, which came later.) Seeing her on TV, Dean, who works for Martha's husband, calls her "an idiot and a lush" and the young woman he has just bedded sneers that she's "dressed up like a holiday ham." But as Roberts plays her, Martha seldom appears as ridiculous or as out of control as other people say she is.

Martha's credibility is crucial here. Shortly after the burglary at Watergate, she travels to California with Mitchell, who abruptly leaves to tend to the burgeoning scandal. The remaining bodyguard (Brian Geraghty) forcefully prevents Martha from leaving her hotel room or receiving any news from the outside. After she's set free, many disbelieve her account of the kidnapping — a response to her craving for attention and occasional fudging of the truth that takes on darker undertones as the Watergate investigation continues.

But compared with a far more intelligent series like, say, "Mrs. America," "Gaslit" disappoints in its efforts to provide a well-rounded portrait of an influence-seeking conservative woman betrayed by her political confreres. It shears the most colorful — and the most tragic — aspects of her life and public image, from her Southern Belle drag to the bleakest moments of her marriage, giving her the vindication that evaded her during her final years but denying her the extravagance of personality she clearly cultivated as her life's work. Though they share a Southern heritage, Roberts simply feels miscast as Martha, to whom she bears no resemblance, physical or otherwise. Martha was willing to shuck her ladylike trappings — to be ugly and to say ugly things — in ways the actor evidently is not.

THE WORLD OF 'GASLIT'

In the world of "Gaslit," women are yoked to men who could never find the kind of fulfillment at home that they get at the office, where they pursue power with a blind zeal. Nixon is ahead by nearly 20 points when his cronies plan Watergate. Though it's never more than subtext, there's a sense that the war, with its win-at-all-costs mind-set, came home in 1972. Dean hates that he's never considered more than an expendable soldier by his superiors. But Liddy is more than willing to do his part to win Nixon the election — whether that entails honey pots, forced rendition, or worse.

As a character, Dean is far too oily and underdeveloped to warrant his screen time (or redemptive potential), while security guard Wills receives from the writers even less. But "Gaslit" becomes groan-inducingly absurdist whenever Liddy appears and the show abandons its realism for satirical or slapstick farce. Liddy acts like a wannabe-Colonel Kurtz, philosophizing aloud about "man's struggle for power" and, later, creating a sadistic mouse trap out of wires extracted from his prison-cell bed frame. (The bloodshed that ensues is grotesque and completely predictable.) The violence gets worse from there, and somehow all that is supposed to fit into a show about a Washington socialite whose biggest irk in the premiere is her rivalry with the first lady.

At the actual Mitchell's funeral, an anonymous supporter sent a floral arrangement that spelled out the words "Martha was right" in white chrysanthemums. This handsome but vapid production is the seven-hour version of that tribute — it exists to draw attention to itself but has little else to say. Fifteen months after the attack at the Capitol, an office break-in that happened a half-century ago feels remarkably quaint. The cover-up, including the silencing of Martha Mitchell, was cruel, but as far as political dramas go, it's got nothing on the present one.