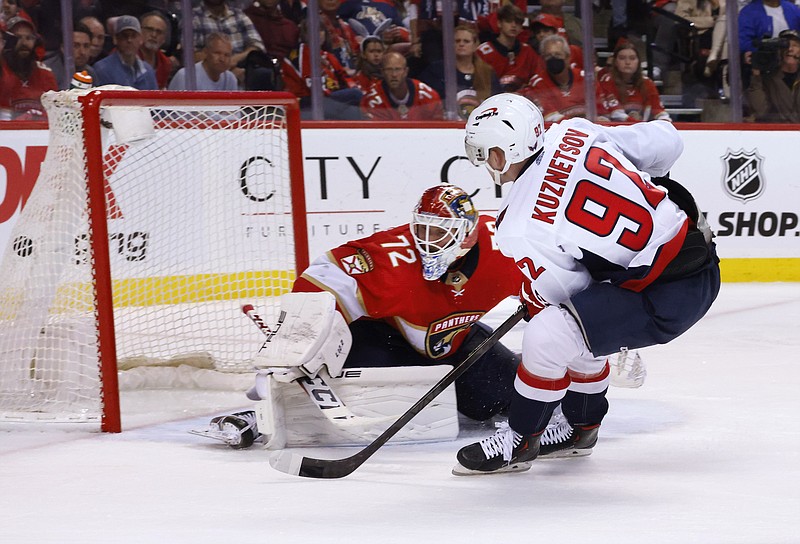 SUNRISE, Fla. -- T.J. Oshie didn't see his go-ahead goal get into the net. The Florida Panthers didn't see this coming, either.

And right away, the top overall seed in the Stanley Cup playoffs finds itself in some trouble.

Oshie scored the go-ahead goal midway through the third period, Vitek Vanecek stopped 30 shots and the Washington Capitals rallied past the top-seeded Panthers 4-2 in the opener of their Eastern Conference first-round series Tuesday night.

"It's one game," Capitals Coach Peter Laviolette said. "Our guys played hard tonight. We've got to regroup tomorrow and get back to work."

Tom Wilson, Evgeny Kuznetsov and Lars Eller also scored for Washington, which trailed 2-1 going into the third period. Teams had been 0-39-1 against Florida in the regular season when trailing after 40 minutes, 0-22-0 when doing so on the Panthers' home ice.

The Capitals must have ignored those numbers. Here's a number not worth ignoring: The last time Florida led a playoff series 1-0 was in 1997, and the Panthers wasted a chance to change that on Tuesday night.

"We let one slip away," said Florida defenseman Aaron Ekblad, who returned after missing the final quarter of the regular season with a knee injury. "I'd like to think we're going to learn a valuable lesson from this."

Kuznetsov tied the game after a Florida turnover with 11:46 left, then Oshie got behind the defense and tapped Nicklas Backstrom's pinpoint pass by Sergei Bobrovsky for what became the winner 2:23 later.

"Typically Nicky fashion, sauced it through a guy's legs and right on my tape," Oshie said. "I just redirected. Didn't see it go in, so he had to come tell me that we scored. It's always nice to get that go-ahead goal."

Eller wrapped it up with an empty-netter with 49 seconds left.

Claude Giroux and Sam Bennett scored for Florida. Bobrovsky stopped 34 shots for the Panthers, the Presidents' Trophy winners after an NHL-best 122 points in the regular season -- and saw the home-ice advantage slip away in their playoff opener.

Game 2 is Thursday, back in Florida.

"We're still in good spirits," Bennett said. "We still know how good of a team we are. There's no panic in the locker room whatsoever. Everyone's still positive. We'll learn from that game and move on. It's a long series."

The Panthers argued for an icing call that didn't come on the play where the game got tied. MacKenzie Weegar lost the puck after bouncing into Capitals star Alex Ovechkin near center ice, went down, and Kuznetsov skated in alone on Bobrovsky. He beat him to the stick side, tying the game 2-2 with 11:46 left.

Oshie's go-ahead goal came not long afterward, and Florida never got the equalizer.

"First game, it's always important," Vanecek said. "You feel really good after that."

Vanecek got the word from Laviolette on the Washington flight to Florida on Monday that he would be starting. Laviolette's message to Vanecek: Be big like Bobrovsky.

The Panthers had 340 goals in the regular season and were the NHL's highest-scoring team since Pittsburgh in 1995-96 -- which, perhaps coincidentally, was the last (and only) season in which Florida has won a playoff series. The Panthers went to the Stanley Cup final that season, haven't gotten past Round 1 since, and the high-octane offense was largely silenced in Game 1.

The Panthers found themselves on the penalty kill just 49 seconds into the game after Radko Gudas got called for high-sticking, and things worsened when Weegar was hit with a delay of game call to give Washington 1:01 of 5-on-3 hockey.

The two-man disadvantage was killed off. And Florida was one second away from escaping the whole thing unscathed, before Wilson scored at 3:47 to give Washington a 1-0 lead.

But Wilson left the game not long afterward. He returned to the ice during a stoppage in play in the second period, skated a bit as if to test something, then returned to the locker room. He was being evaluated postgame for a lower-body injury.

"Anytime a player doesn't finish a game, there's a concern level with it," Laviolette said.

Bennett tied the game late in the first, Giroux made it 2-1 in the second, but the Panthers were blanked the rest of the way.

"It's going to be a lot harder in the playoffs," Bennett said. "We learned that tonight."

NEW YORK -- Evgeni Malkin scored on a deflection 5:58 into the third overtime, giving Pittsburgh a win over New York in Game 1 of their series.

Jake Guentzel scored twice and Bryan Rust had a goal and two assists for the Penguins. Sidney Crosby also had two assists. Casey DeSmith had 48 saves before leaving the game midway through the second overtime. Louis Domingue, who appeared in only two games during the regular season, came on and had 17 saves.

On the winning goal, Malkin was positioned in front of the net when he tipped a long shot by John Marino over Rangers goalie Igor Shesterkin.

Chris Kreider had a goal and an assist, and Adam Fox and Andrew Copp also scored for the Rangers. Mika Zibanejad had two assists. Shesterkin finished with 79 saves, second to the NHL record of 85 saves by Columbus' Joonas Korpisalo in the 2020 playoffs.

The five goals tied the team playoff record for a period and chased Nashville's backup goaltender David Rittich from the game with 4:56 remaining in the first.

Lindholm scored a power-play goal early in the first period. Markstrom stopped all 16 shots he faced as Calgary earned its second playoff win at the Saddledome since 2015. 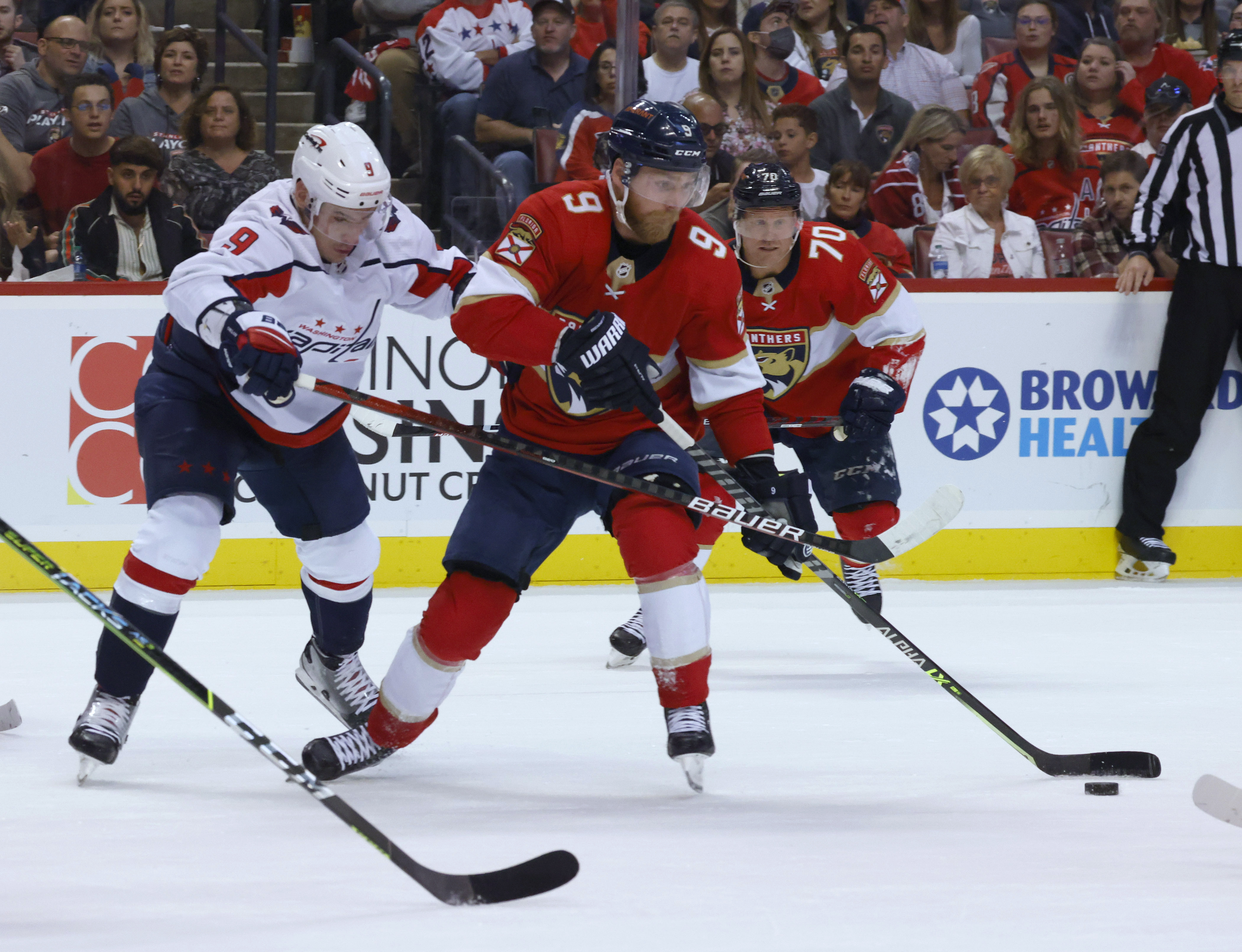 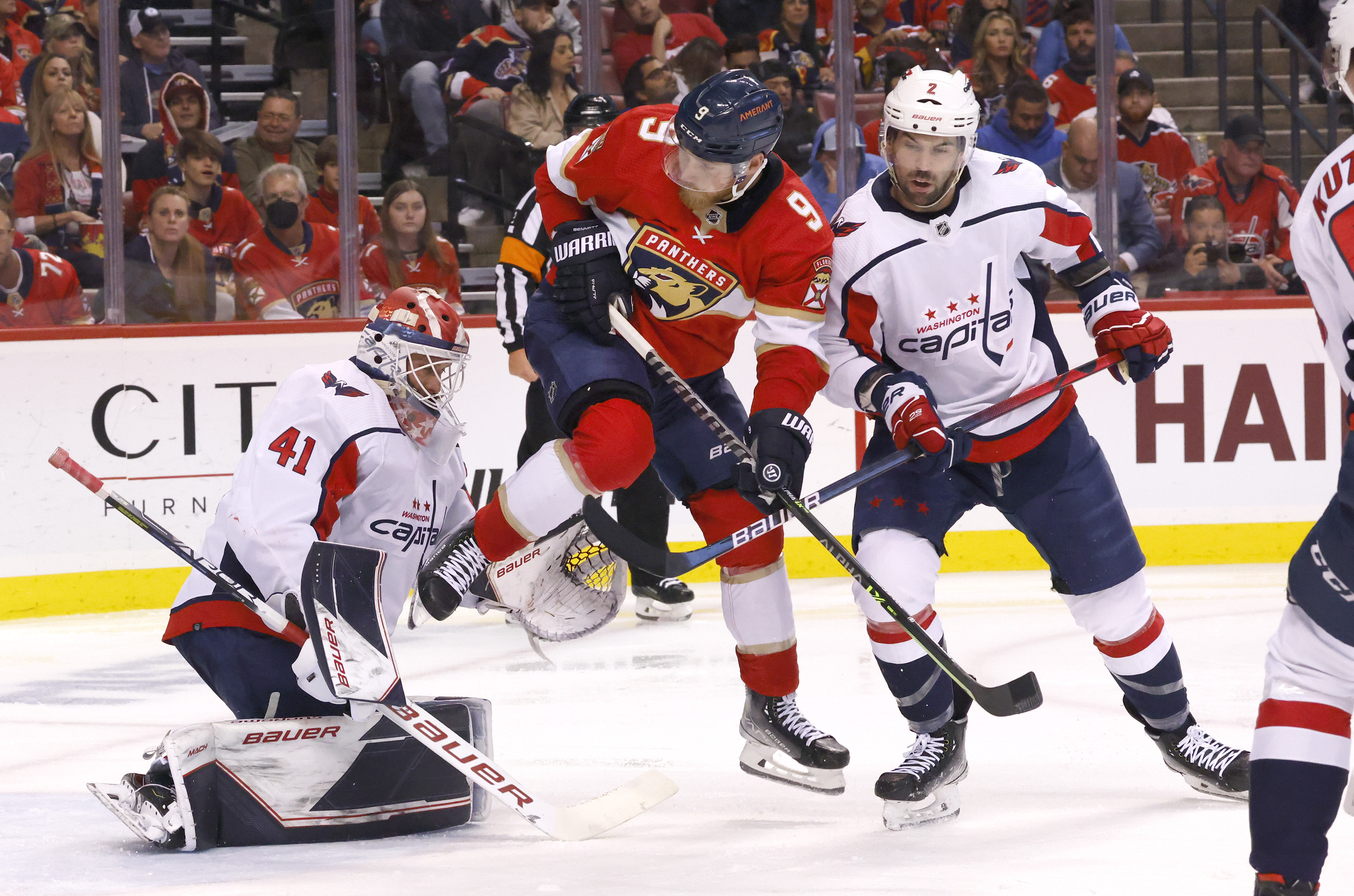 Florida Panthers center Sam Bennett (9) jumps to get out of the way of a shot as Washington Capitals goaltender Vitek Vanecek (41) and defenseman Justin Schultz (2) defend during the second period of Game 1 of an NHL hockey first-round playoff series Tuesday, May 3, 2022, in Sunrise, Fla. (AP Photo/Reinhold Matay) 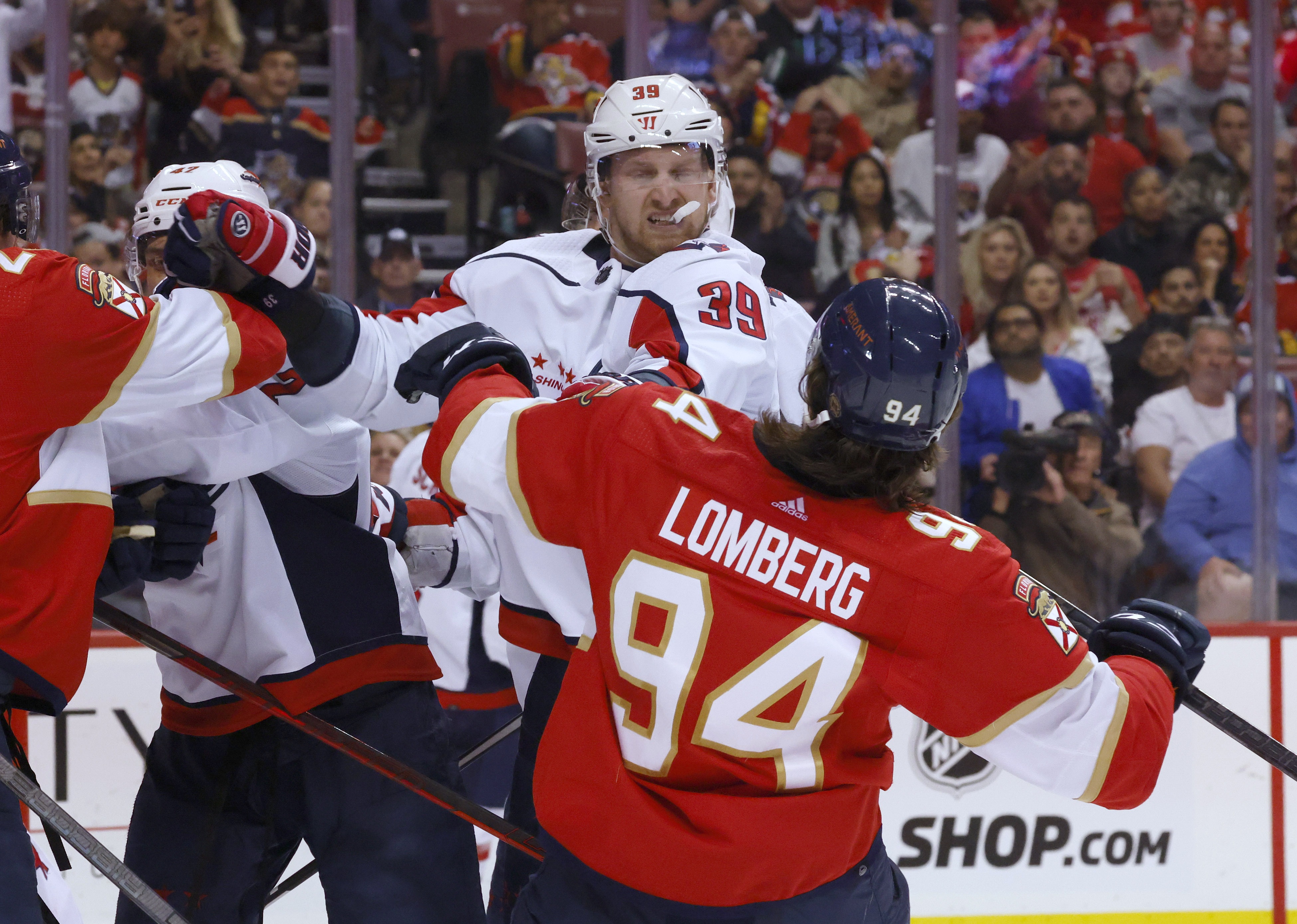 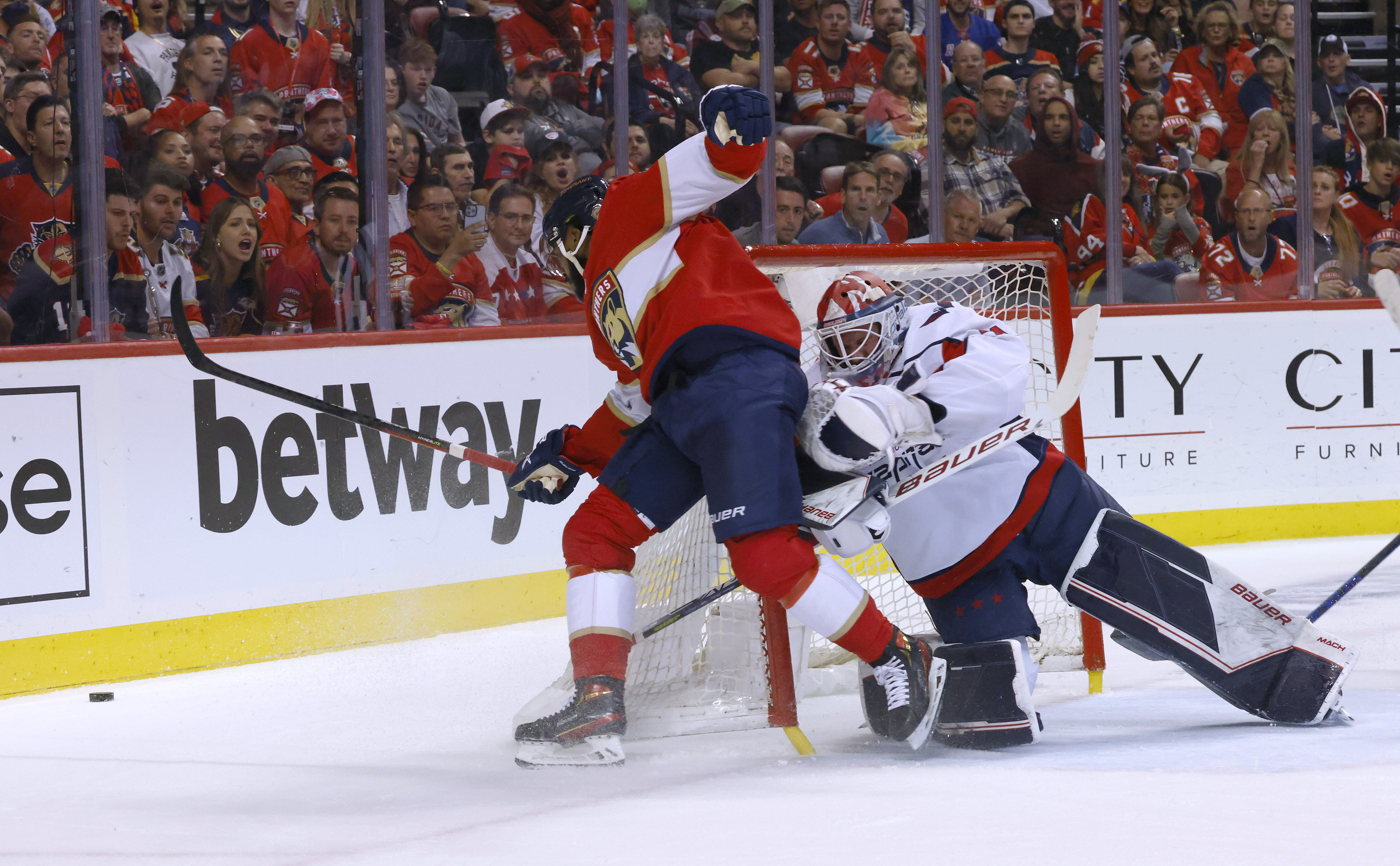 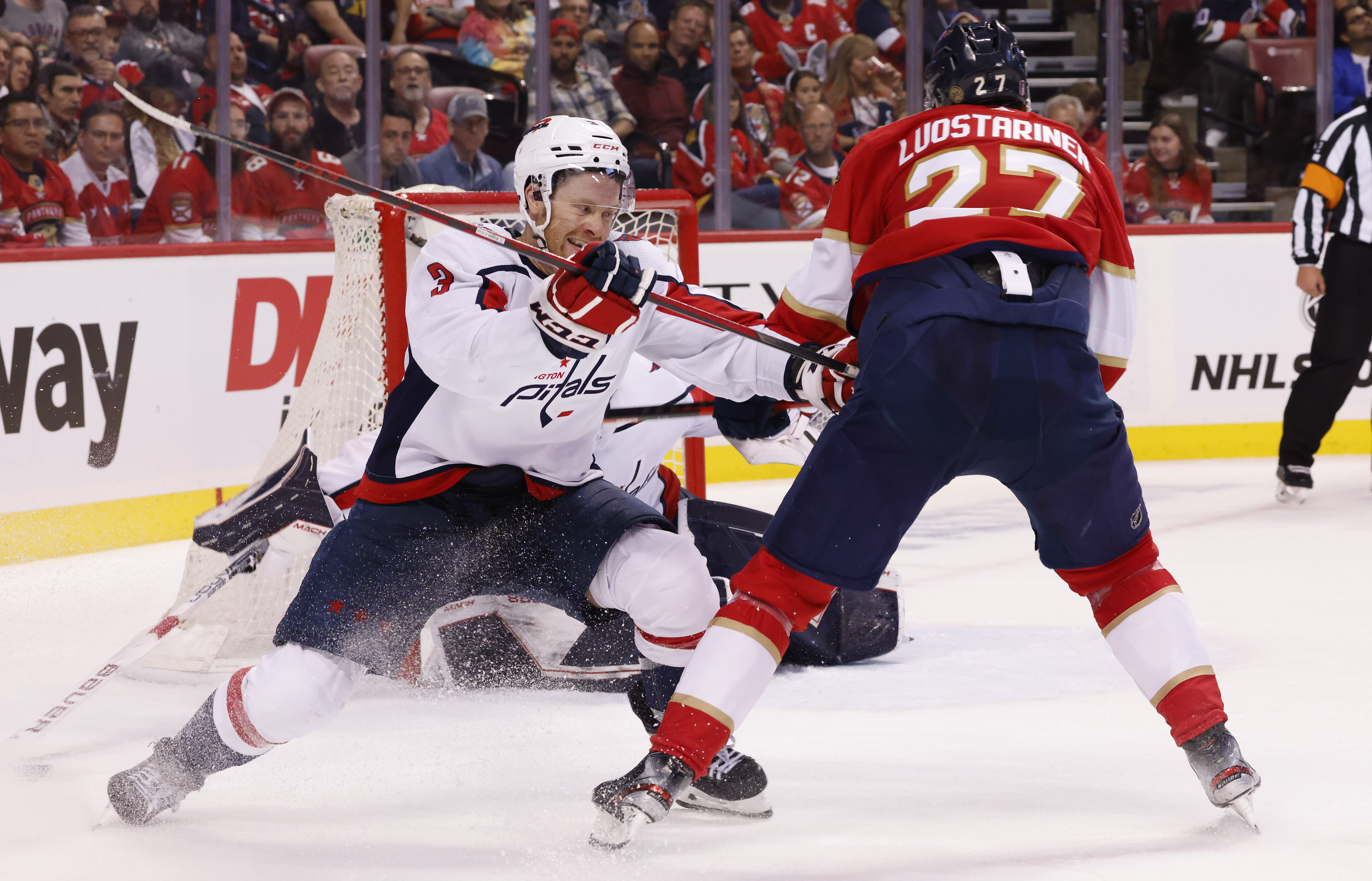 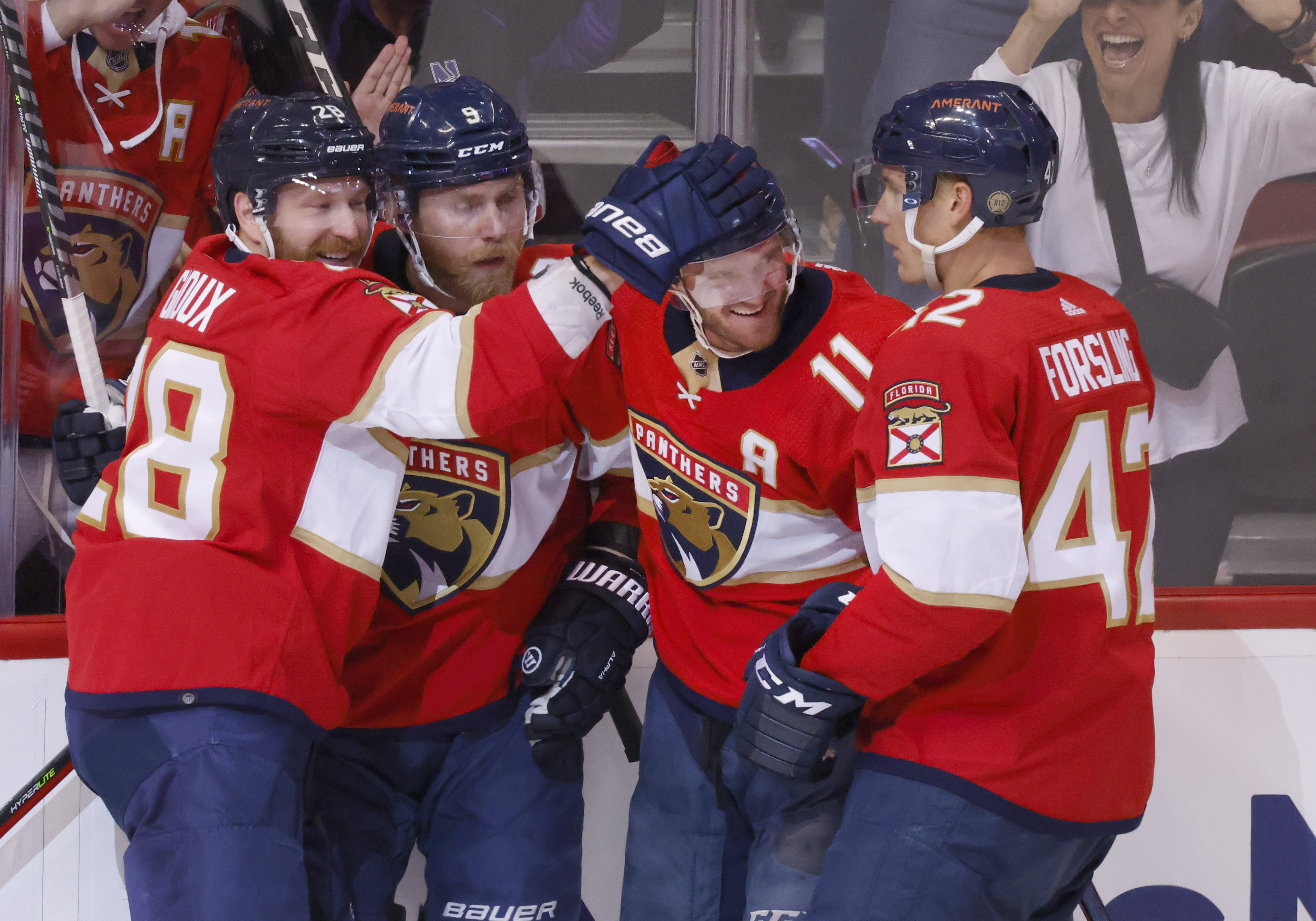 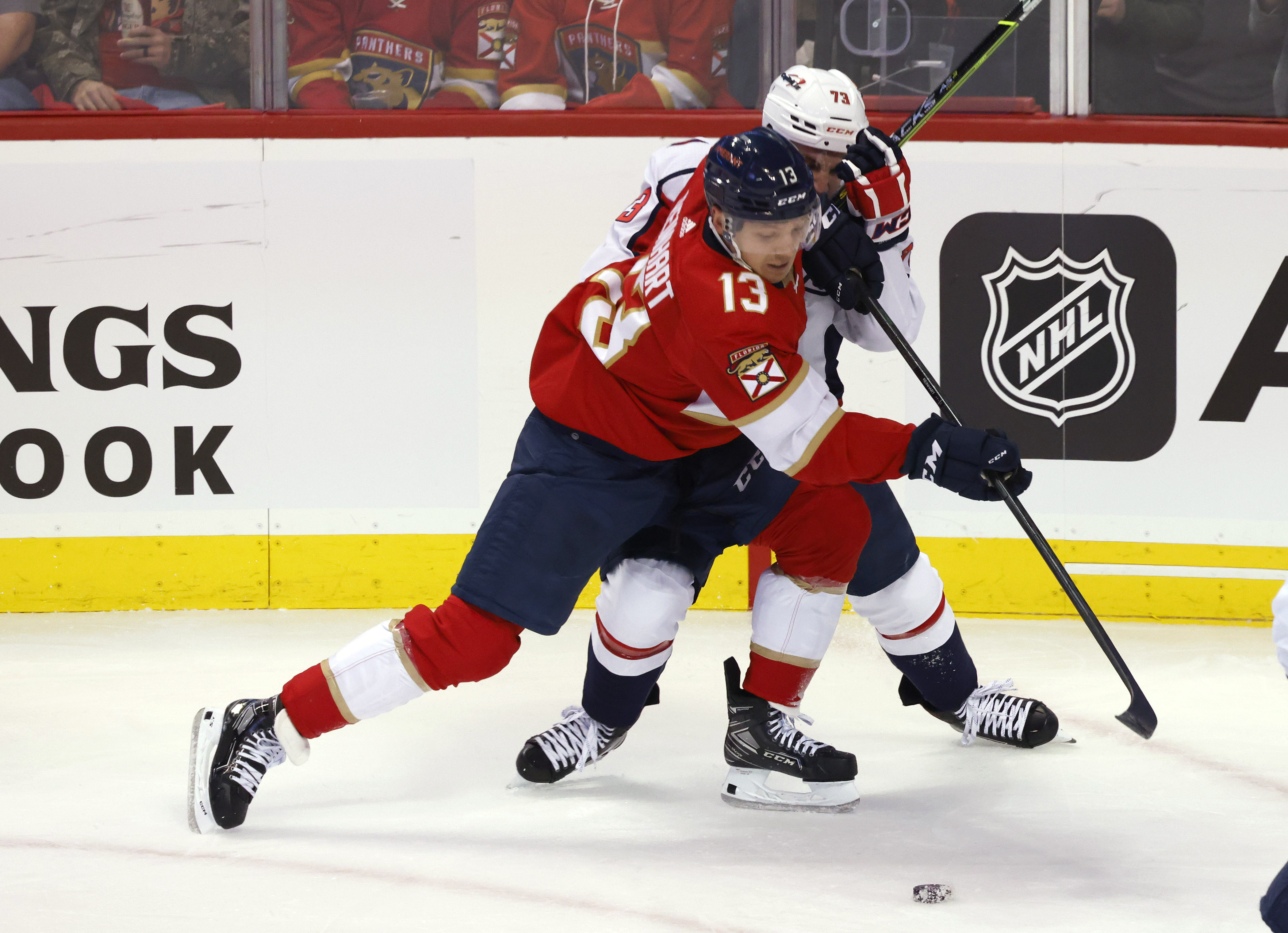