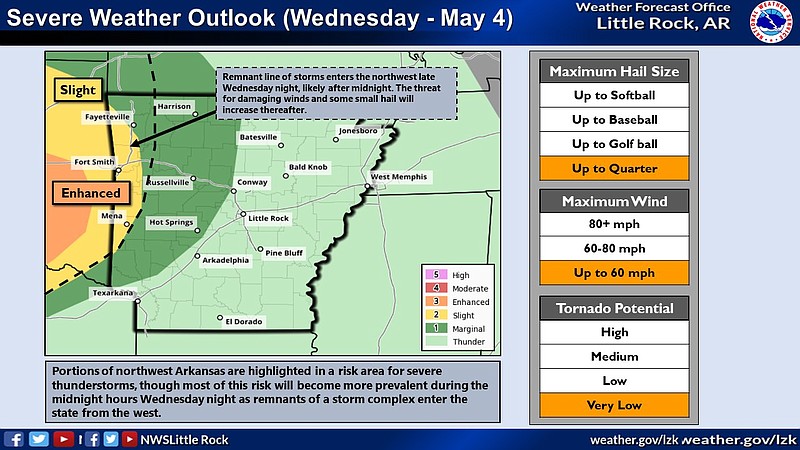 Intermittent showers and thunderstorms are expected across the state Wednesday, according to the National Weather Service.

Heavy to excessive rainfall and local flash flooding will remain a concern Wednesday and Thursday, according to a Wednesday morning briefing from the weather service.

A flood watch will be in effect for Northwest Arkansas beginning Wednesday morning, according to forecasters.

The area is considered at a slight risk for severe weather conditions Wednesday, including hail up to the size of a quarter, winds up to 60 miles per hour, and very low tornado potential, forecasters said.

Severe thunderstorms are possible in portions of Northwest Arkansas, and will become more prevalent during the midnight hours as Wednesday turns to Thursday, according to the weather service.

On Thursday, central and southern portions of the state are considered at an enhanced risk for weather hazards, including hail up to the size of a quarter, 60 to 80 mile per hour winds, and low tornado potential, according to the briefing.

Over the last month, a good portion of the state was above normal for rainfall, with a large area receiving two to four inches above normal amounts, the briefing states.