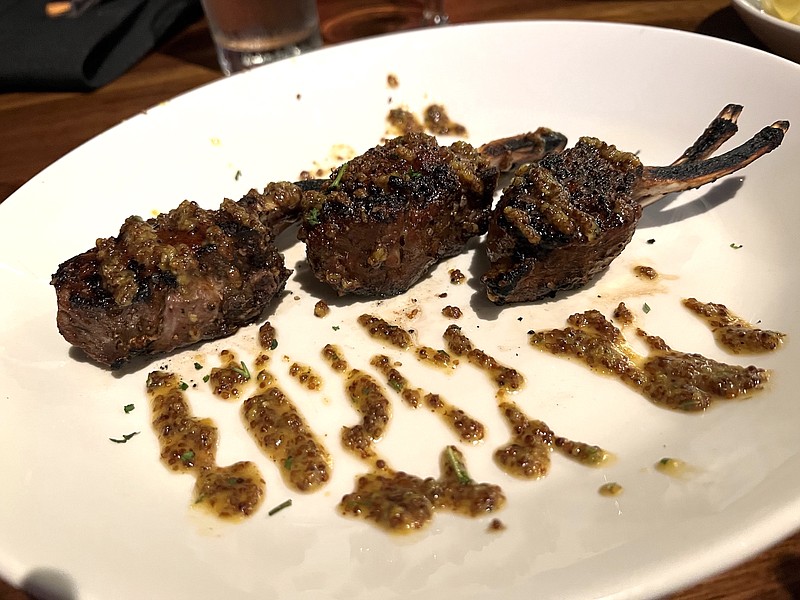 There was considerably more meat than we first thought on the six bones of Sullivan's Steakhouse's Rack of Lamb. (Arkansas Democrat-Gazette/Eric E. Harrison)

Sullivan's Steakhouse has a lot at stake.

It opened last month in a high-end shopping center in far west Little Rock, the Promenade at Chenal, in the very building in which another chain steakhouse, Del Frisco's, failed to make it. Another, more locally based steakhouse, Bones Chophouse, across the street in the Village at Rahling Road, went under not too long after that.

It's not 100% certain as to the reason, but we can speculate that what felled them was having to compete, not just with the area's other top-priced dining options, but directly against powerhouse Arthur's, a first-level steakhouse that is almost literally just around the corner on Chenal Parkway.

Our experience at Sullivan's fell short of expectations. It wasn't the food, which was, with a couple of exceptions, well and properly prepared. We had some items we'd certainly recommend. 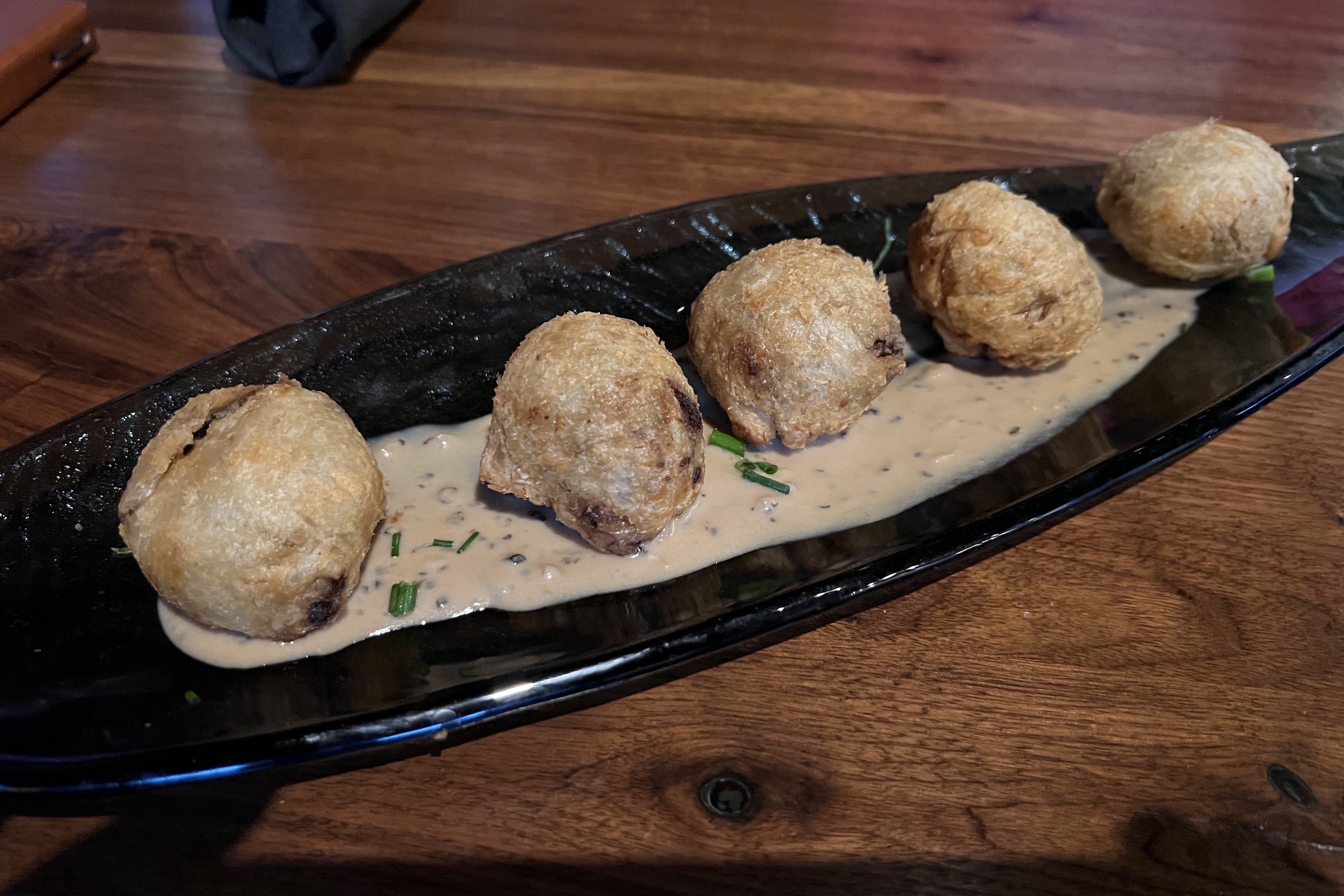 The Beef Wellington Bites appetizer was less interesting on the plate than on the menu at Sullivan's. (Arkansas Democrat-Gazette/Eric E. Harrison)  But considering what we paid, we should have had a much better meal and considerably better service, before and after we sat down. Mostly what we encountered were little glitches, but they add up. At this price point, they were a bit jarring. And particularly in comparison with Arthur's, where service has always been exemplary, those shortfalls loom pretty large.

This may have been the highest-price meal for two we have encountered in Little Rock — with tax and gratuity, we topped $200 for two appetizers, two entrees, two side items, two glasses of wine and a glass of unsweetened iced tea (and that's with an unexpected discount on one of the appetizers).

We didn't exactly try to economize, but we didn't reach for the top of the menu price scale, either. And there are less-expensive options, including, though we didn't know it while we there, a prix fixe meal that provides more food for less money.

Oh, and we never got any bread of any kind. Even much less expensive places manage somehow to spring for a couple of rolls.

Being a new chain place in a town where diners flock to new chain places for at least two or three months, Sullivan's drew a crowd even in midweek. So when we arrived comparatively late in the dinner cycle — just before 7 p.m. — we were not surprised to be told that, no, they could not shoehorn a party of two with no reservation into the dining room. But worry not, full-service dining is available in the bar, where there are a dozen or so spacious booths, seats at the bar itself and at one long, tall table.

In addition to stray diners and bar patrons, the bar is also the area where folks who do have reservations wait for their tables. So it was, in addition to being crowded, also noisy. An enclosed patio space off the bar has not yet opened.

We were about to be resigned to the table seating option when, miraculously, a booth opened up and we pounced on it. We had a short wait for menus to appear, and a somewhat longer wait for our beverages of choice — a bit surprising, actually, and also they didn't appear at our table at the same time. A glass of wine came via a "wine runner" — somebody who picked up a small carafe of pinot grigio at the service end of the bar; she got practically to the table before she realized there wasn't a glass to pour it into and had to go back for a wine glass. 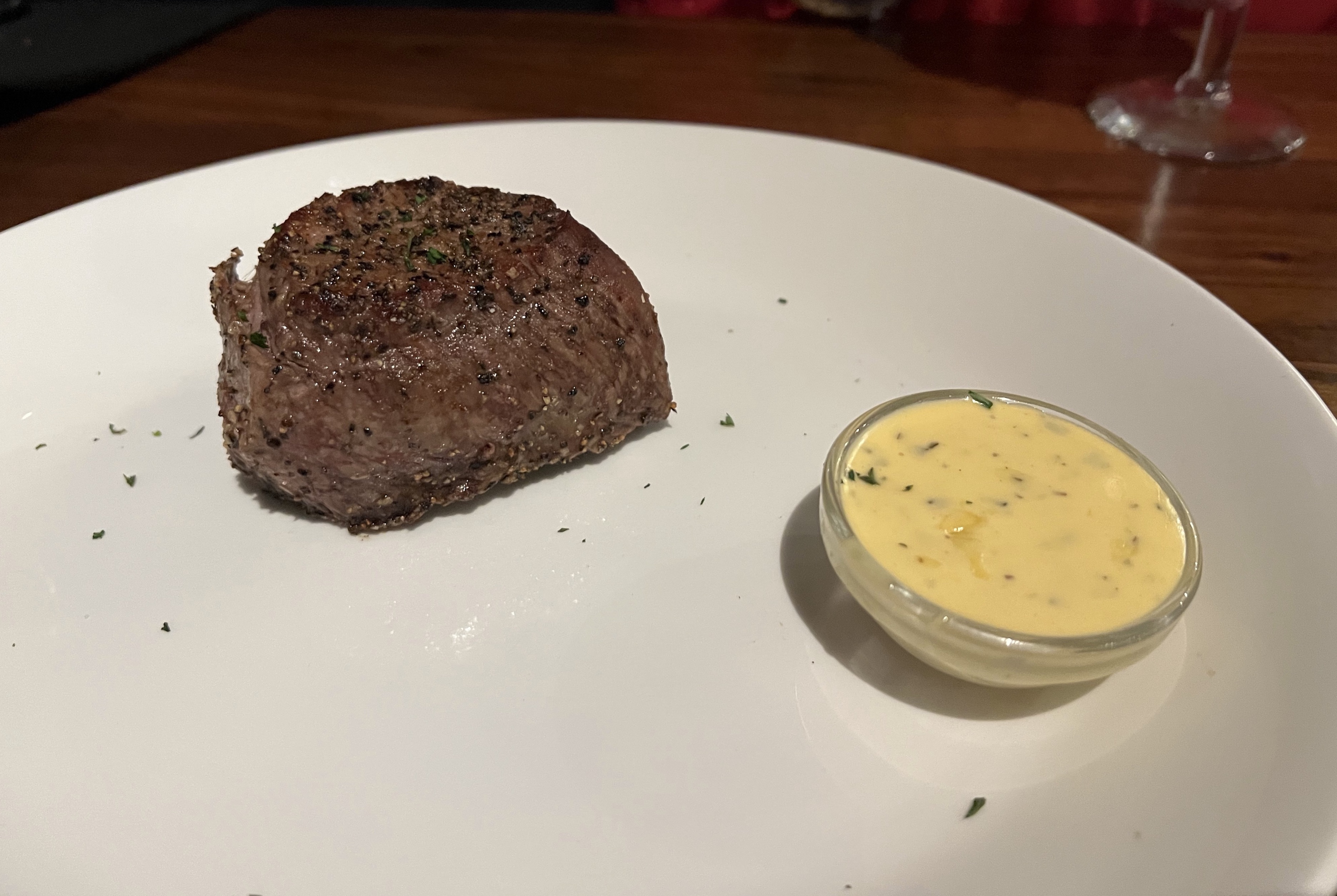 Our eight-ounce filet mignon, though an entirely adequate portion, looked both small and lonely on a big plate with nothing but a little cup of bearnaise sauce for company at Sullivan's Steakhouse. (Arkansas Democrat-Gazette/Eric E. Harrison)  Our glass of iced tea showed up a couple of minutes later, from another direction — possibly from the kitchen or a waiter's station deeper within the restaurant. It came with a lemon wedge and sugar and sweetener options in a ceramic holder, but no spoon. Asking for one at first perplexed the waitress, who wondered out loud if we needed it for our yet-to-arrive soup. (How, one wonders, would one politely stir in sweetener, or even the juice from the lemon wedge, into the tea without a spoon?)

That small glass of iced tea, we discovered when our check arrived, cost us $3.50, though that includes refills — we got one. It's entirely possible that that is the most we've paid for iced tea at a Little Rock restaurant that didn't come from a single plantation in Sri Lanka.

Our server noticed when our wine glass was empty and agreed to provide a requested refill, then wondered — twice — whether the refill had ever arrived, which it hadn't, until she went and got it herself. We are presuming that wine refills must have been somebody else's responsibility; perhaps that of the wine runner, whom we never saw a second time.

Our appetizers also arrived separately, not together. We then had an almost half-hour wait for our entrees. And even after they showed up, together, we had to put a trace on one of our side items.

We had a split score on appetizers. The Shrimp & Lobster Bisque (cup $9, bowl $10.50), though a tough choice over the French Onion Soup ($10), turned out to be a good one; it was rich, tangy and slightly spicy and even the "cup" size was adequate. We got one bonus when we found actual bits of shrimp and, possibly, lobster at the bottom of the small bowl. We found a second bonus when the check arrived and discovered it was listed as a $4 "side item," not an appetizer. Woohoo!

The Beef Wellington Bites ($15!), however, wasn't as successful as it looked on the menu, where it's described as "Tender Puff Pastry filled with Filet Mignon [and] Creamy Mushroom Duxelles." All of that was minced into a bland and slightly gooey paste inside a slightly soggy pastry shell cut into five balls on a bed of uninspiring bourbon peppercorn sauce.

From the portion of the menu labeled "Bone-In Cuts" we scored big time with the Rack of Lamb ($49), six bones of very tender Australian chops (ordered medium rare because it is a sin to overcook lamb chops) with more meat on them than we first thought, nicely seasoned and accented with a grain-mustard/rosemary glaze that worked for texture as well as flavor. And it was actually the least expensive option in that category — we could have gone for the 22-ounce, $58 Bone-In Ribeye Cowboy Cut or the 18-ounce, $73 Wagyu Bone-In Strip from Snake River Farms, Idaho.

Our 8-ounce Filet Mignon ($47; a 12-ounce filet is $58), though perfectly cooked as we ordered it, medium rare, with a light black-pepper crust on the top, had less "zip" than Intrepid Companion was hoping for, especially since the bearnaise sauce, one of four "Complimentary Sauce of Choice" choices (the others are Bourbon Peppercorn, Bordelaise and Sullivan's Signature Steak Sauce) was especially vague. The steak looked especially lonely, and smaller than it really was, alone on the large charger with just the cup of sauce; perhaps on a smaller plate, it might have been less disappointing. (Other house-cut steak options: a 16-ounce Ribeye, $50, and a 12-ounce Prime New York Strip, $47.) 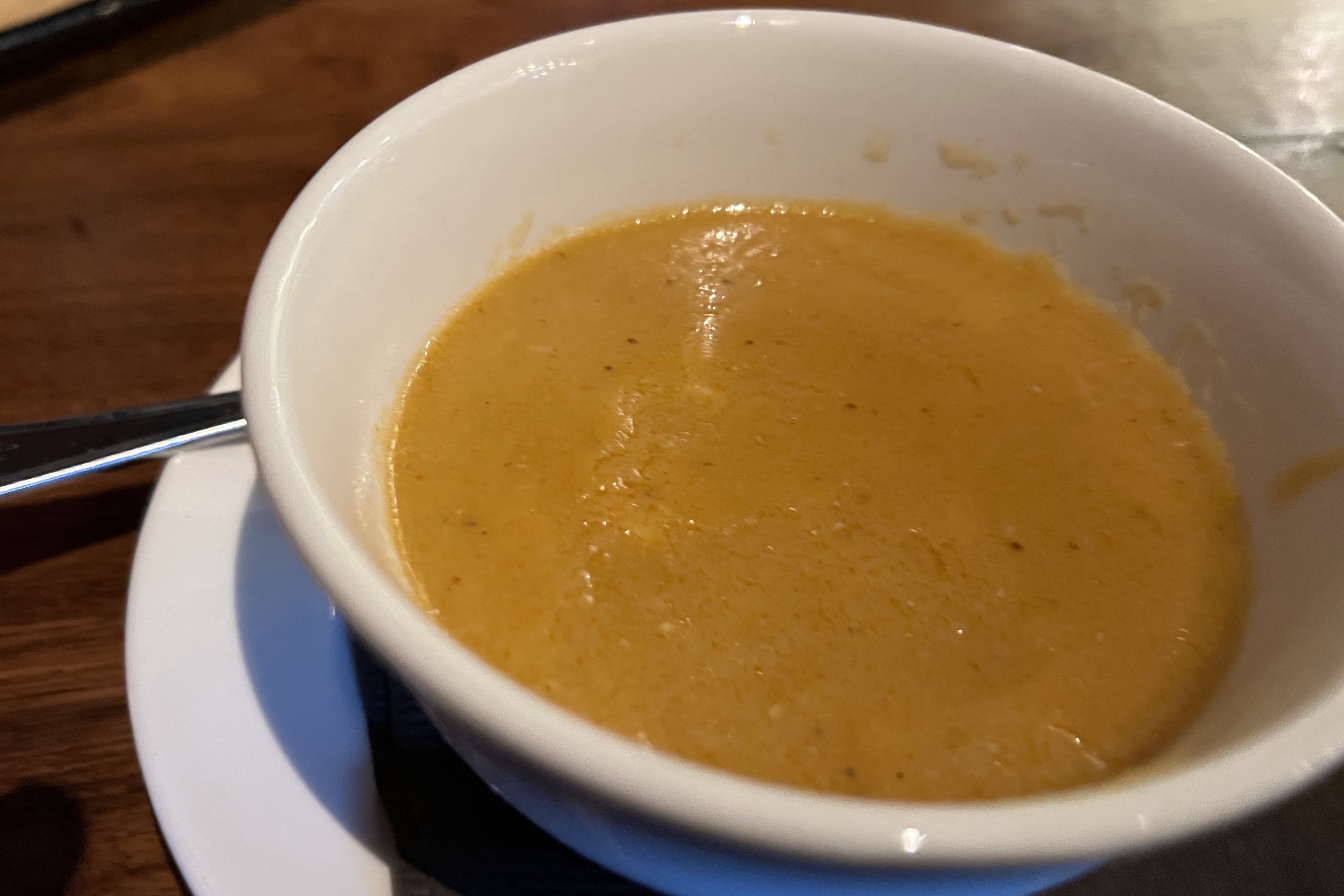 Sullivan's shrimp and lobster bisque — its level slightly lowered before we took the photo — was one of the meal's higher points. (Arkansas Democrat-Gazette/Eric E. Harrison)  Neither the bone-in cuts nor the house-cut steaks come with anything on the side; we sort of missed the message on the printed menu, if it was actually there (we subsequently found it online), to "add a Caesar, Wedge or Market Greens Salad to any entree, $4." We opted instead for a couple of the $11 (!) side items: two large hunks of fresh broccoli accompanied by an unimpressive Hollandaise, which we preferred to the even less inspiring fresh asparagus, accented by roasted garlic oil and sprinkled with Grana Padana cheese that did little to enliven it.

There are chicken and seafood entree options that are less expensive than the steaks. The printed menu does briefly and in smallish print refer to a Prix Fixe Menu, but does not go into any detail. We wish we'd asked — again, online and after our meal, we discovered "The Sure Thing," which for $48 would have gotten us a choice of soup (the bisque) or one of three salads; an entree (choices are a 6-ounce filet, a 10-ounce New York Strip, broiled salmon or herb brick chicken, each with a side item) and one of three desserts. For an extra $7 you can upsize your steak.

Sullivan's does have an extensive wine list (and expensive — some of the reds go for more than $250 a bottle, up to and including the Stag's Leap "Cask 23" cabernet sauvignon, $495, and Opus One, $525, though we notice several decent options for around $50). Wine is also pretty pricey by the glass — starting at $11.

Oh, and by the way, there were several open tables in the main dining area that remained open the entire time we were there. Perhaps Sullivan's wait staff isn't yet adequate to cover.

Print Headline: A lot at steak