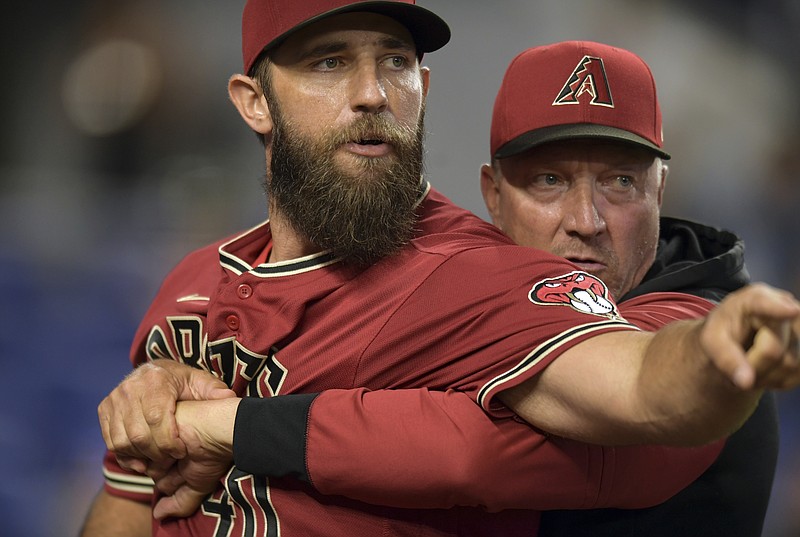 Arizona Diamondbacks' pitcher Madison Bumgarner, left, is restrained by bench coach Jeff Banister while arguing with umpires after the first inning of a baseball game against the against the Miami Marlins, Wednesday, May 4, 2022, in Miami. (AP Photo/Jim Rassol)

MIAMI -- Pavin Smith hit a two-run home run in the ninth inning, and the Arizona Diamondbacks beat the Miami Marlins 8-7 on Wednesday after left-hander Madison Bumgarner was ejected.

Bumgarner gave up a leadoff home run to Jon Berti in the first, and then retired the next three batters. As he was walking to the dugout, the pitcher gestured with his arm before holding his hand out for a foreign-substance check by first base umpire Dan Bellino.

Bumgarner said something to Bellino as the check was ending, and the umpire threw him out. Bumgarner then started yelling at Bellino and had to be restrained by some coaches.

"You guys have seen the video," Bumgarner said. "I don't know if I could say anything that would make the situation better. What I am going to say is I'm extremely proud of our team, coming back. Obviously, I didn't go into the game with the intention of throwing one inning. Everyone picked me up today."

Bellino told a pool reporter that Bumgarner was ejected for directing profanity at an umpire. Video of the foreign-substance check showed Bellino staring at Bumgarner while he repeatedly patted his hand, but Bellino said he didn't think that was a factor in the ejection.

"I wouldn't say he took exception to it. It was just a hand check," Bellino said.

It was Bumgarner's second career ejection. He also was thrown out on June 11, 2018, for arguing balls and strikes.

BREWERS 18, REDS 4 Rowdy Tellez homered twice and set a Milwaukee record with eight RBI to extend his recent power surge in a blowout of Cincinnati.

ROCKIES 5, NATIONALS 2 Jose Iglesias had a two-run double and Connor Joe a two-run triple in consecutive at-bats in the fourth inning after a crucial error by shortstop Alcides Escobar, and Colorado rallied to beat Washington.

ANGELS 10, RED SOX 5 (10) Los Angeles scored six runs in the 10th inning, including a two-run home run by Taylor Ward and a three-run shot from Jared Walsh, for a win over Boston.

ORIOLES 9, TWINS 4 Cedric Mullins and Ramon Urias each hit a two-run home run during Baltimore's six-run third inning for a win over Minnesota.

PADRES 5-5, GUARDIANS 4-6 San Diego's Mike Clevinger had an impressive first start since undergoing elbow surgery in 2020, and Manny Machado hit a two-run home run in the first game of a doubleheader. Rookie Steven Kwan's RBI single in the 10th inning gave Cleveland the split in the doubleheader's second game.

RANGERS 2, PHILLIES 1 (10) Brad Miller hit a two-run single in the 10th inning to give Texas a win over Philadelphia.

WHITE SOX 4, CUBS 3 Lucas Giolito (1-1) struck out 10, Luis Robert made a game-saving catch and Matt Foster worked out of a major jam as the Chicago White Sox beat the Chicago Cubs at Wrigley Field.