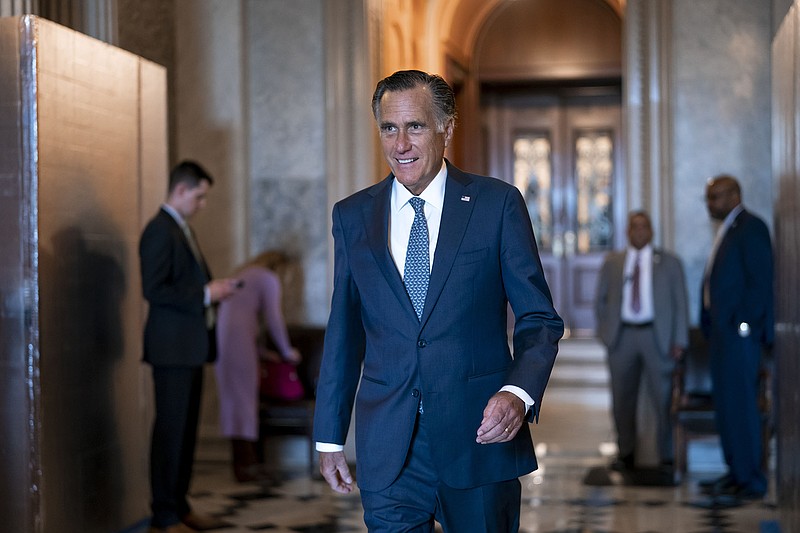 U.S. Sen. Mitt Romney, R-Utah, leaves the Senate chamber Wednesday during a series of votes. Romney alone among GOP senators has supported a major expansion in the expired Child Tax Credit to parents who are not working. (AP/J. Scott Applewhite)

The GOP has adamantly opposed President Biden's proposals to provide cash payments for parents, universal prekindergarten and other family benefit programs such as expanded child-care subsidies. But with the Supreme Court appearing poised to overturn Roe v. Wade, even some Republican senators are acknowledging that the party may need to do more to provide support for parents.

A court decision overturning Roe would lead about half the states to make abortion illegal immediately or soon after the Supreme Court acted. The ruling is the culmination of a decades-long Republican project but could also put a spotlight on the party's resistance to efforts to financially assist parents.

"I think that needs to be an important part of the discussion," Sen. Mike Rounds, R-S.D. said. "It's not just a matter of saying, 'We are pro-life.' It's a matter, then, of promoting and allowing these people who are making very difficult decisions with their lives to make sure we can help individuals facing these tough decisions."

Sen. Josh Hawley, R-Mo., said he has had "preliminary" conversations with other Senate Republicans about coming forward with child programs after the Supreme Court ruling: "I do think if the court does ultimately overturn Roe, it will be a big sea change politically, and I think there will be all kinds of new opportunities to think about what that means for us from a policy perspective, and I hope we'll come forward with new and interesting policy perspectives."

"We're, of course, waiting for the ruling to be finalized, but yes," Sen. Todd C. Young, R-Ind., said. "We as a party and as a country need to be supportive of women who have unplanned pregnancies -- through adoptive services, through health-care services and other means."

For months before the Supreme Court ruling, conservative policymakers had been discussing if the party could get behind a more modest expansion in family benefits than the proposals supported by Democrats or the White House should Roe be struck down, according to three conservative policy experts. Those talks have yielded no changes to the party's stance. Only Sen. Mitt Romney, R-Utah, has supported a major expansion in the Child Tax Credit to parents who are not working. Biden's one-year expansion of the credit expired at the end of last year amid almost uniform GOP opposition, leading to an approximately 41% spike in child poverty.

Democrats say the Republican opposition to child benefits only underscores the recklessness of the push to overturn abortion protections, arguing that the GOP wants both to force mothers to have children and then deprive them of material support for raising kids. Democrats have long been skeptical that Republican talk of child policy amounts to anything more than a political stunt designed to distract from conservative opposition to economic benefits for families.

"Not only do [Republicans] want to force women to have children if they are pregnant, but when they do have them, they don't want to provide any support for them," Sen. Mazie Hirono, D-Hawaii, said. "That's what the Republicans do all the time."

Several Senate Republicans this week declined to comment on whether the ruling changed their position on family benefit programs, saying it was too soon to weigh in. But the party has long been divided between social conservatives who are more open to providing aid, and free-market conservatives who have resisted such efforts.

"Do they offer up a family policy to counter this decision, or do they pivot back to their message on inflation and the economy and Afghanistan?" asked Doug Holtz-Eakin, a former economic adviser to President George W. Bush and John McCain. "This has been a battle in the conservative ranks for a while ... But the GOP is going to have a big decision to make."

This week, Sen. Rick Scott, R-Fla., said he opposes efforts to create programs that would reward parents who do not work, reiterating traditional GOP concerns with expanded parental benefits. Sen. Patrick Toomey, R-Pa., another free-market conservative, said he had not given thought to the idea of expanded child benefit support. Sen. Ted Cruz, R-Texas said Republicans will look to "enact policies that make it easier for families to raise kids," predicting a slew of new measures to be introduced, but also suggested the GOP would oppose new spending measures.

But while the exact ramifications of the ruling remained unclear -- especially shortly after its release, and with a final opinion still to come -- some of the traditional GOP opposition to family benefits may be softening.

Already, blocs of congressional Republicans have begun looking at various forms of family support policy. About a dozen Senate Republicans have backed legislation to allow pregnant women to access the Child Tax Credit, which currently only is awarded to parents with children, while Sen. Tom Cotton, R-Ark., has a separate proposal to give a new $3,600 payment for those who have miscarriages. Sen. Cynthia M. Lummis, R-Wyo., also pointed to bipartisan legislation that allows parents to receive the Child Tax Credit in advance to help pay for parental leave. Romney has been trying to pitch his colleagues on a compromise to revive the Child Tax Credit at a lower level than that approved by the Biden administration last year.

All these efforts are expected to gain renewed attention in the wake of the Supreme Court's decision.

"There's going to be a lot of pressure on Republicans to see what they can do for young kids," said Sam Hammond, a policy expert at the Niskanen Center, a right-leaning think tank, who works closely with several Senate GOP offices. "Leading Senate Republicans who are typically skeptical have been showing renewed interest in policies to help parents shoulder the cost of children."

If terminating a pregnancy is no longer an option, some conservatives say it may strengthen the case for providing parents with financial support.

"I could see if Republicans decide that abortion politics are working against them, there could be a push for child-care benefits, more maternal health care, and better adoption services to make it easy and more affordable for more mothers to carry the babies to term," said Brian Riedl, a conservative policy expert at the Manhattan Institute, a right-leaning think tank. "It would put their money where their mouth is when challenged on making it easier for mothers to afford their children and get their health care."

The United States spends less money as a percentage of its gross domestic product than almost any other country in the Organization for Economic Cooperation and Development on family benefits, according to OECD data.

"All of these conservative Republicans seem to give great orations about 'family values,' " Senate Finance Committee Chairman Ron Wyden, D-Ore., said. "When they're done with their speeches, when it comes to putting it into substantive concrete legislative ideas -- there's no there, there."