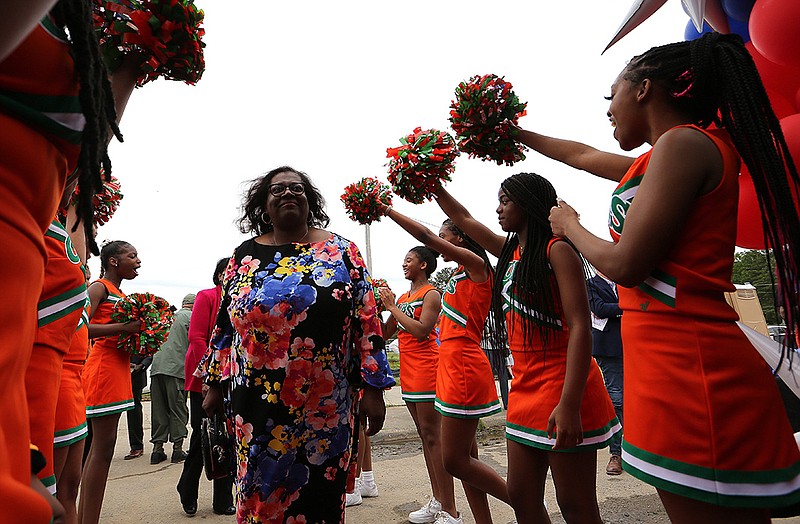 The site of the Little Rock School District's next new school -- the Dr. Marian G. Lacey K-8 Academy -- is right now a mix of old school debris with signs of a new building to come.

On a day proclaimed by Little Rock Mayor Frank Scott Jr. to be Dr. Marian G. Lacey Day in the city, school district officials, government and business leaders, students and the Lacey family gathered at the construction site Wednesday to celebrate what will be the district's third, kindergarten-through-eighth grade campus.

The three-story, $87 million campus to open in 2024 is being built at 9417 Geyer Springs Road where the old John L. McClellan High School, which closed in 2020, is being demolished.

The new school to follow, carrying the name of a long-time district principal and assistant superintendent, will serve pupils in attendance zones now served by Meadowcliff and Baseline elementaries and Cloverdale Middle schools -- all in the southwest section of the city.

Superintendent Mike Poore told a crowd of about 200 on what he called a momentous day for the district, particularly for its southwest area, that the new school will be second to none, "even better than Southwest" High that opened in 2020.

Future students at the school selected to retain McClellan's red, white and blue colors and its lion mascot, but the new Lacey name brings together the past and the future.

"That woman brought it for this community, over and over and over," Poore said about Lacey whose name is incorporated into the mane of the lion mascot logo.

The construction of a new school is intended to fulfill commitments the district made in a 2017 settlement to a federal court lawsuit.

The terms of the settlement placed a moratorium on new construction projects, including school expansions, until Southwest High School was completed and Cloverdale Middle School is replaced. The settlement stated that planning was underway to identify the construction that would be necessary at the McClellan High site to convert it to a high-quality replacement campus for Cloverdale.

The settlement was part of a larger lawsuit that also challenged the 2015 takeover of the district by the state for chronically low student achievement at six of 48 schools, as well as for what were described as racially disparate schools and services in the district.

The challenge to the takeover was dismissed by U.S. District Judge D. Price Marshall Jr. in 2016. Former Little Rock School Board members Rep. Joy Springer D-Little Rock, and Jim Ross, who were plaintiffs in the original lawsuit, attended the Wednesday event.

Poore and School Board President Greg Adams on Wednesday described for the crowd what Adams said was a decade-old "winding road" to the school's construction. It was a promise kept, they said, but one that took not only a federal court lawsuit but also two elections to get the necessary funding.

A proposal to extend the collection of 12.4 debt service tax mills to fund school construction and repairs failed in May 2017, but a similar measure to raise $300 million for the new school and other projects in the district was approved in every part of the district last November.

Business executive Gary Smith, representing the Little Rock Regional Chamber of Commerce, said Wednesday that he has been a volunteer in a lot of initiatives but that he was grateful to play a role in what was his first "100-year project."

"We are about to see something that is going to transform education in this city," he said of the $300 million fund-raising effort. "To me, the biggest need was right here," he said about the new Lacey school.

"And to get to name this school after an educator is very important to me," Smith said. " It speaks volumes to recognize those who have dedicated their lives ... to our youth. That is our investment in the future. I will tell you there is no successful city that doesn't have a successful school district."

Speaking in front of a trio of huge earth-moving machines decorated with banners bearing the name, the mascot and an artist's rendering of the new building, Chris East -- principal of Cromwell Architects Engineers and project manager -- listed the features of the school, which is intended to promote student and teacher engagement, as well as allow for more program options and the latest technology.

There will be 64 classrooms, six project labs, eight fine arts classrooms, four rooms for students with special education needs, four maker spaces, experiential career education space, a library/media center, a cafetorium and a gymnasium and space that will be the first tornado shelter in a Little Rock district school.

The building is designed so that after school hours, classrooms can be closed off and the larger media center, cafetorium and gymnasium can be used by the public.

"This will be a place to learn, to create friendships, develop social and interpersonal skills," East said. "This building will create a supportive environment where students will be safe. It will support physical and mental well-being and will be flexible enough to adapt to each student's particular needs."

Con-Real and Clark Contractors are partners with Cromwell in the building project that is on a 13- acre site and will ultimately require 1,100 tons of steel.

Cloverdale sixth-graders Morgan Crawford and Fernando Martinez Medina saluted the future students of the new school who will go on to be "world-changers."

"Make us proud!" they said in unison to the younger students, including Chyna Arnold, William Cortes Martinez, Madelyn Romero Gonzales and Genesis Clemente Orellana who were also speakers.

The event was also a celebration of Lacey, a 30-year district employee who died at age 76 in 2017.

Her husband, Jesse J. Lacey Jr., a former Little Rock district administrator who was accompanied by daughter Cynthia Lacey, offered thanks to those who are making the school happen.

He told how he met his wife when both were students in 1957 at what is now the University of Arkansas at Pine Bluff. He recalled the milestone moments that included the births of their three children, their different school jobs in places such as Clarendon and Helena, before Little Rock, and Marian Lacey's winning the $25,000 Milken Award for educators. He also gave examples of the now successful adults -- government officials, athletes, and business people -- whom they taught.

The Laceys' son Julian Lacey of Florida -- in a statement read by family friend Lee Ann Matson -- said that the naming of the school for his mother "cements her legacy for the world to see."

"It is my hope that the staff, the students, and the faculty embody the values my mother exhibited," he wrote. "As a result, the surrounding community and the city of Little Rock will benefit from the new Lacey K-8 Academy," he wrote.

Darian Smith, the district's executive director of elementary education, proposed to other district leaders earlier this year that the new school be named for Marian Lacey, who was one of his childhood Sunday School teachers and who once showed up -- with her husband -- at his dormitory door at Morehouse College just to check on him.

A survey of community members about the school name generated more than 4,300 responses, 3,100 of them for Lacey, Darian Smith said.

Scott, the mayor, said that anyone who knows him knows the importance of the Lacey family to him, starting when he was a student at Horace Mann Magnet Middle School where Marian Lacey was the principal.

"She embodied hope for our city, for the students she touched with her infectious smile and she ensured that we all had correct subject-verb agreement," Scott said to laughter.

Scott said Lacey was "smiling in the heavens right now" to know that $87 million is being invested in the 72209 southwest Little Rock zip code to create opportunities that will turn a new chapter for the district and for the youth. 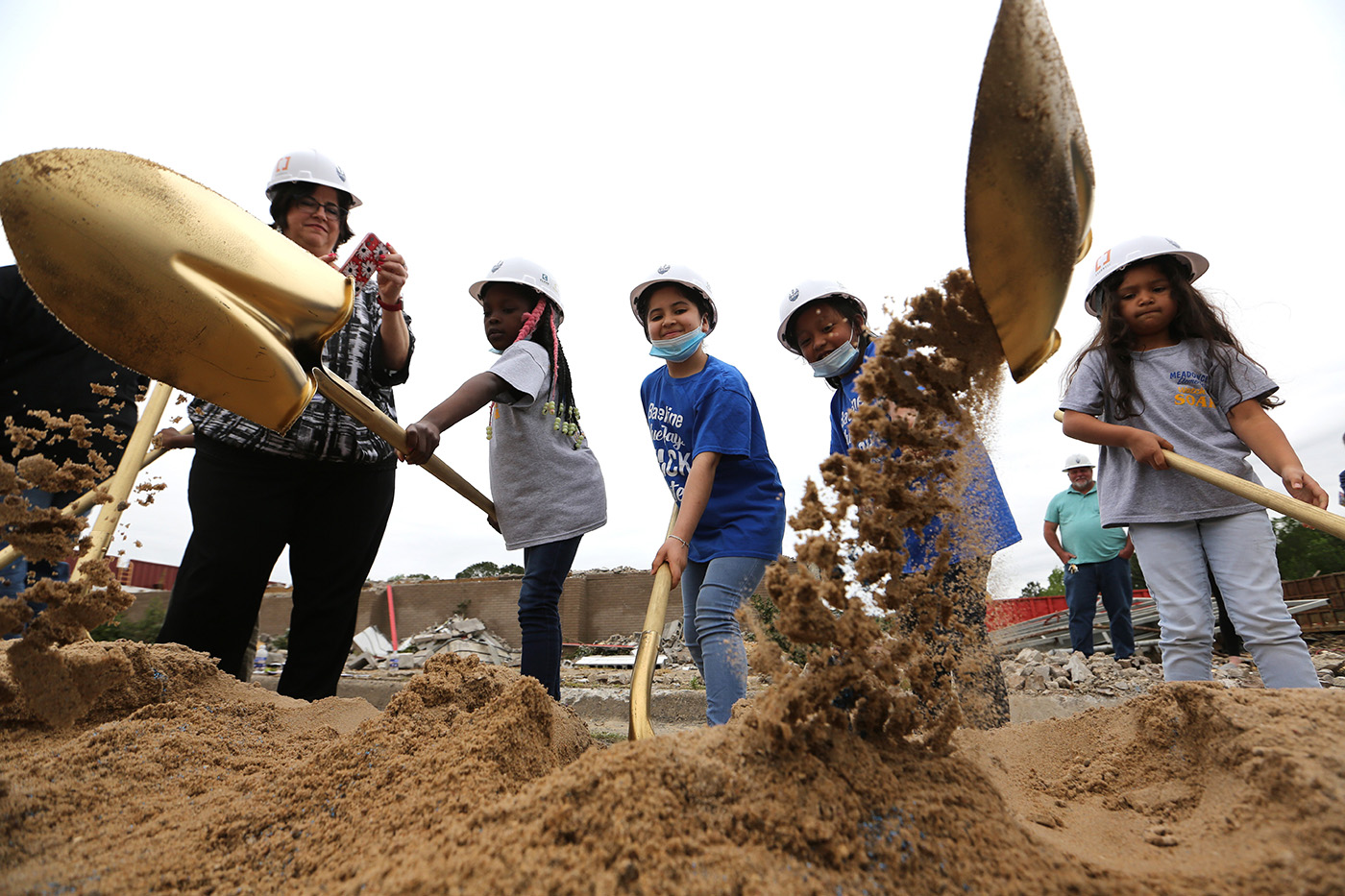 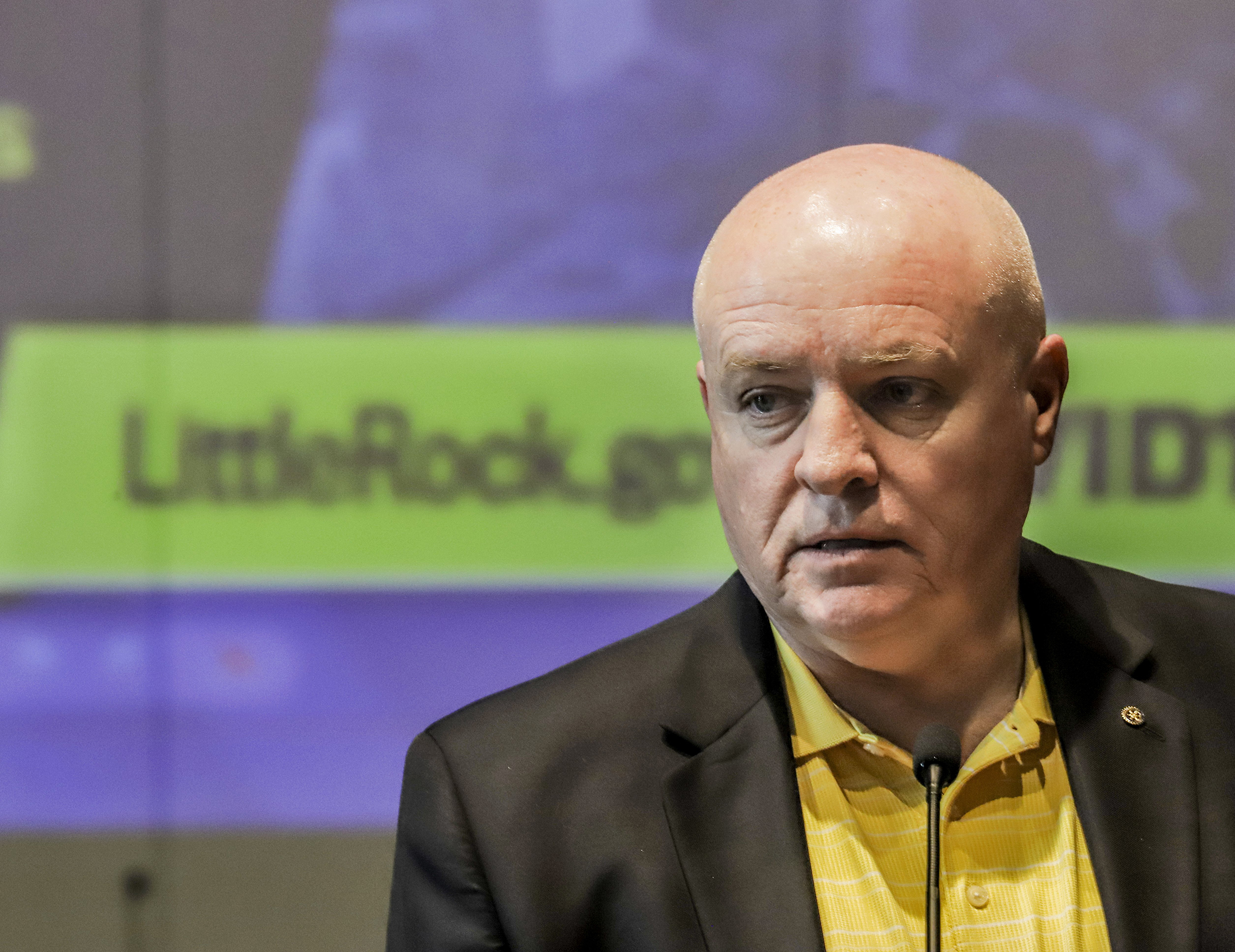