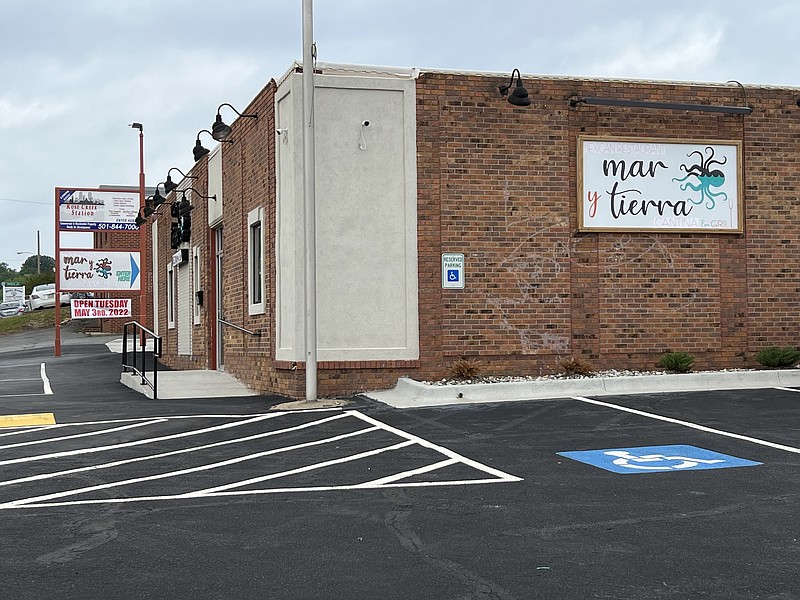 It has been 2 ½ years since we first reported the name of the restaurant (November 2019), Mar y Tierra Cantina & Grill, in conjunction with a chef who was supposed to run its kitchen when it opened — but not long after we learned he was no longer associated with the establishment. (In case you're curious, it was Geovanny Villagran, now the Diamond Chef-winning owner/operator/chef of the La Casa de Mi Abuela Mawmaw's House food truck.)

And it has been nearly two years (July 2020) since we first reported a target opening date — Aug. 5, 2020 — for the latest restaurant at 1900 W. Third St., Little Rock, near the state Capitol. Over the years it has housed at least eight former eating and drinking establishments in the eastern half of the brick building, while its western half held a longtime liquor store.

Well, the restaurant finally opened Tuesday after having expanded to both halves of the building, experienced all kinds of construction delays and what appears to have been a total change of management and ownership. We'd been reporting evidence of recent work, including vehicles parked out front and a revamping of the parking lot.

Co-owner Hugo Rios says his menu, as the name indicates, focuses largely on steak and seafood, but will also include a spectrum of "ordinary" and specialty Mexican dishes — 200 plates in all, he says. Tentative hours are 10:30 a.m.-9 p.m., possibly longer on weekends, based on traffic, daily — every day but Christmas and Thanksgiving, Rios says.

The phone number first listed many months ago is actually active: (501) 476-3336. The website, restaurant-bar-mar-y-tierra-seafood-grill.business.site, and the Facebook page, facebook.com/MaryTierraLittleRockSeafoodandGrill, are also both active but have not changed in more than a year (and the website still carries a 5-star "ghost" review from one Patti B that cannot possibly have been based on an actual dining experience: "Love to shop here. Outstanding folks work here!").

Ben Brainard says he's now looking at a June 14 target to open Little Rock's first Big Bad Breakfast, 101 S. Bowman Road, Little Rock, in the former Arvest Bank building at West Markham Street and Bowman Road, behind David's Burgers. He plans to open with the "greatest hits" of the Birmingham, Ala.-based chain, but hopes down the line to introduce Little Rock-specific seasonal items. The entire menu, notes general manager Heinz Kurt, who has managed ZaZa Fine Salad & Wood-Oven Pizza Co. and, all-too-briefly, his own South American-centered restaurant, Lulu's Latin Rotisserie & Grill, spreads across the entire service period — 7 a.m. to 2:30 p.m. daily (also closed only on Christmas and Thanksgiving). "You can have breakfast for lunch, or lunch for breakfast," Brainard notes. "We make hollandaise many times a day."

This week he filed the paperwork for a mixed-drink license, which will allow for not only the bloody Marys and mimosas on the menu but provides the possibility of an in-house specialty cocktail program. Once the initial I's are dotted and T's are crossed, Brainard says, they'll add to-go and catering, "but not right out of the gate."

This will be Brainard's first solo project since he left Yellow Rocket Concepts, for which he worked for 20 years, and says his training in that operation is serving him in good stead. "It's a lot of pressure," he says, "but we're excited." Among the projects currently in progress: redesigning the parking on the lot so as to accommodate in-house and drive-thru customers for David's Burgers as well as Big Bad Breakfast.

The chain has existing outlets in Oxford, Miss.; Greystone, Homewood and Florence, Ala.; Inle Beach, Fla.; Charleston, S.C.; and Nashville and Franklin, Tenn. And it's expanding rapidly through several states, including Tennessee and Kentucky.

And speaking of Mexican restaurants, just up the street, a franchise of Crazy King Burrito is on tap to open sometime this summer at 401 S. Bowman Road, Little Rock, which, according to a news release, "specializes in making the same burritos served in the original restaurant in Cozumel, Mexico," as well as a variety of Mexican beverages. Franchisee Dr. Atif Khan says the place will offer breakfast, lunch and dinner, and "we make everything fresh every day instead of warming up meals that have been shipped frozen from miles away." Outside of Cozumel, there are outlets in Beavercreek, Ohio, and Stevensville, Mich. crazykingburrito.org.

And speaking of brunch franchises, we reported a few weeks ago that The Toasted Yolk Cafe, a Houston-based brunch-centered chain and franchise operation, has a pending location coming to Little Rock, and that it was reportedly headed for the 17000 block of Chenal Parkway. Now we have confirmation that it is so: a building permit application for $600,000 for the 5,435-square-foot Suite 230 at 17406 Chenal Parkway, across the parkway from the Promenade on Chenal. thetoastedyolk.com.

The grand opening of the Chicken Salad Chick outlet at 3901 Warden Road, North Little Rock, is set for Wednesday, and as is the custom of the chain, the first 100 guests through the door receive "1 (One) Free Large Quick Chick per month for 12 months ... but one guest will be randomly selected to a Large Quick Chick per week for 52 weeks!" Grand-opening specials continue through May 14. The restaurant's hours will be 10 a.m.-8 p.m. Monday-Saturday. (501) 747-1512; Chickensaladchick.com.

The BREW YAYA Coffee & Roaster in the Regions building, 400 W. Capitol Ave. (on the Fourth Street side) has closed and the space is now empty. It was the Little Rock outlet of a coffee shop of the same name at 2800 S. Second St., Cabot; co-owner/co-founder Barry Adams explains that a number of issues, and in particular the covid-19 death of a family member, made it impossible to keep the location open. The phone number in Cabot: (501) 286-6023.

Folks at the Jersey Mike's in Benton tell us May 25 is the target date to open the west Little Rock location, at the Shoppes at Chenal, 24100 Chenal Parkway at Cantrell Road. No word yet on an opening date for the one pending at 3901 Warden Road, North Little Rock, in the parking lot of the Other Center, next door to Chicken Salad Chick (see above) and in proximity to Target and the Texas Roadhouse. We have a call into the owners of all four Central Arkansas restaurants (there's also one in Conway) and we'll keep you posted.

One of our correspondents has spotted "opening soon" signs on the second location of Grill Pollo, in a long-vacant former Hardee's, 2006 N. Reynolds Road, Bryant. How soon? The folks at the original location, 14810 Cantrell Road at Taylor Loop, Little Rock, say maybe early June, but they're still (as is the case of almost everybody opening a new restaurant) waiting on equipment to arrive. The menu, which you can check out at grillpollo.com, is a fusion of grilled Southern and Latin. The Little Rock phone number is (501) 673-4033; there are two Facebook pages: facebook.com/Grill-Pollo-102363161501774 and facebook.com/profile.php?id=100057654600848.

We have reported in recent weeks the opening of a Whataburger in Magnolia; the announcement by the El Dorado-Union County Chamber of Commerce that a Whataburger is indeed on the docket for North West Avenue in El Dorado; and an April Fool's prank announcing fictitious plans to open additional restaurants in Little Rock, Fort Smith, Pine Bluff and Jonesboro. Except that maybe the Fort Smith location isn't a prank after all. An April 22 post on the Facebook page for The City of Fort Smith, Arkansas (facebook.com/FTSmithAR) flashes an apparent "Welcome Whataburger" banner at the Parrot Island Waterpark in Fort Smith and thanks Whataburger "for listening to the people of #fortsmitharkansas." We're still waiting for official word from a chain spokeswoman on this as well as the El Dorado location.

Sunday is, of course, Mother's Day, and it would be an excellent idea that unless you are taking your mom, or anybody else's mom, to a fast-food outlet, to make a brunch reservation. Meanwhile, very few places have graced us with information on their special brunch offerings (and note that, as usual, this does not constitute an endorsement, nor does the absence of any particular restaurant's information indicate anything but that we didn't get it on time or didn't get it at all):

◼️ Cypress Social, 7103 Cock of the Walk Lane, North Little Rock, is putting forth what they're calling "our elevated buffet brunch." Cost is $45; the full menu is available at cypresssocial.com and reservations are "strongly encouraged." (501) 916-2670.