Missed it by that much: Antagonistic hen highlights return to Jackson Point 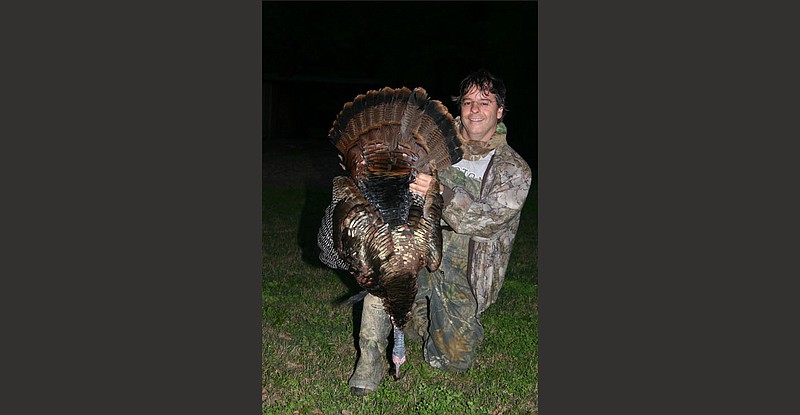 While battling cancer during the 2009 spring turkey season, the author killed his first mature gobbler in Arkansas while hunting with Sheffield Nelson in Phillips County at Jackson Point. (Photo courtesy of Sheffield Nelson)

The Witness and I crunched dust in our teeth for days.

Longtime readers of this column might remember The Witness from a series of articles in 2007 about a seemingly endless quest to take an elusive black squirrel in Phillips County. It shouldn't have been a hard task in a place that was rife with black squirrels, but they always vanished when The Witness and I came near.

After many tries, we finally got one. Its mount occupies an honored spot in my office.

The Witness's identity was a closely guarded secret until March, when my book, St. Tom's Cathedral, A Turkey Hunter's Quest for His Best" revealed him to be Sheffield Nelson.

Our hunting grounds for the trophy squirrel was Island 64, otherwise known as Jackson Point. It's one of many oxbow islands between the levees on the Mississippi River.

In 2009, when I was undergoing radiation and chemotherapy treatment for colorectal cancer, Nelson insisted that hunting turkeys at Jackson Point was vital to my recovery, as well. I bagged some magnificent gobblers while hunting with Nelson, including my biggest.

About 10 years have passed since Nelson and I last hunted together at Jackson Point. Nelson remedied that deficiency Saturday.

We arrived on Friday afternoon. After stowing our gear in Nelson's lodge, we visited some of our old familiar haunts. With vivid memories, we recalled places where we worked or killed turkeys. We had to stop at the place where a black squirrel finally made an unlucky mistake.

"We got him in a big tree that used to be right here. Remember that?" Nelson said. "We finally got him cornered in a tree that didn't have a hole to climb into, and it was too far from all the other trees. It got blown down in a storm a few years ago, but it was right here."

At one remote corner of the property we spied four jakes and a mature gobbler feeding contentedly in a field.

Nelson opted to hunt a different spot, so I returned in a UTV. It was warm and windy, and the dirt road was very dry and dusty. Dust swirled into the cab through the floorboard, and my attempts to filter it were futile. I coughed and hacked up dust the rest of the night.

The turkeys were gone, but I hiked almost to the far end of the field and erected two AvianX decoys at the convergence of three food strips. Unlike all my other decoys, the AvianX are amazingly lifelike. All of the details are sharp. The eyes are bright, and the colors are vibrant. They rest on a stake that allows the decoys to sway and bob in the wind. The movement makes them more dynamic than regular stationary decoys, and their weight prevents them from spinning like helicopter blades in stiff wind the way light decoys do.

I hunted until about 6 p.m., but no turkeys answered my pleas for companionship.

In the morning, I persuaded Nelson to hunt that spot with me. Turkeys are never guaranteed to be today where they were yesterday, but when scouting reports are scant, it's not unwise to hunt where you saw turkeys the day before.

In addition to my AvianX decoys, Nelson put out one of his mounts made of a real taxidermy turkey hen. We set up behind a bushy tree at the edge of the field and waited.

Behind us was a thicket that was surprisingly open. Turkeys had scratched many bare spots from the leaf cover. Bordering the thicket was Mellwood Lake.

"They roost in those trees over there, and they move back and forth along that water," Nelson said. "They have everything they need right here. Food, water, cover and roost trees. We just need for Mr. Gobbler to come calling."

We didn't take long to strike up a conversation with a hen behind us, but she did not reveal herself. Shortly after, I saw a hunched shape gliding through the grass about 200 yards away. With his Steiner binoculars, Nelson identified it as a hen.

"Wherever there's hens, gobblers will be close by," Nelson said.

I scratched a few yelps from my Eddie Horton box call. It's made of bois d'arc from Hempstead County and a lid made of African ebony. Its full tone projects well across open country in the wind.

The hen appeared not to hear the call and vanished into the tall grass. About 10 minutes later, she emerged from the grass and approached the decoys.

The hen zeroed in on the middle decoy, an AvianX hen with its head high in an alert position. The real hen stalked all around the decoy, purring aggressively. With each circle she made around the decoy, she grew increasingly agitated. Finally, she couldn't abide the decoy's insolence any longer. She stared the decoy in the eye for a moment and then drilled the decoy's head with her beak.

With a loud, hollow thump, the decoy spun on its stake. Its head came back around and slapped the real hen.

Every feather seemed to stand straight up. The hen drilled the decoy again, but this time she was ready. She jumped back as the head spun around this time, and she pecked it again. This made the decoy spin faster, which forced the hen to be agile. She jumped back and forth and side to side.

Eventually the hen seemed satisfied to have made her point. She strolled over to inspect Nelson's decoy and then returned to abuse the insolent AvianX decoy a second time.

After winning her fight with the decoy, the hen fed contentedly among the decoys. I purred lightly, and she came within 12 feet to inspect the source of that sound. Not finding it, she resumed feeding.

Nelson and I were certain that a gobbler would come to the hen, but we were mistaken. When the hen finally left, songbirds were the only sign of life.

We both had commitments back home, so Nelson and I ended the hunt at about 1 p.m. On the way back to the lodge, we passed six male turkeys about to cross into the far side of the field that we hunted. It looked like the same group that was in the field the previous day. As Maxwell Smart would say, we missed it by "that much!"

Print Headline: Missed it by ‘that much!’