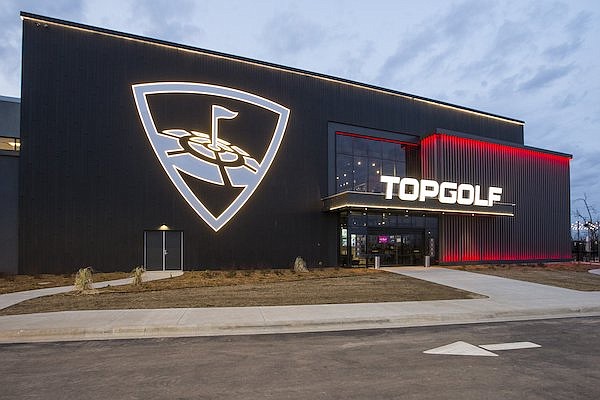 Topgolf, the Texas entertainment company, has plans to build its second Arkansas location in Little Rock.

The announcement on Wednesday for another golf-centered venue with food, beverages and music said the multilevel project when completed would create 300 full-time and part-times but otherwise provided scant details.

"We are thrilled to be bringing Topgolf to the capital of Arkansas and planning to join this vibrant community," said Topgolf Chief Development Officer Chris Callaway. "As we look to expand the Topgolf experience in the state, Little Rock is the perfect place to do it."

"It's been a goal of mine to bring Topgolf to Little Rock since I first reached out to the company on Twitter in 2018," Scott said. "This popular golf and entertainment venue is a welcome addition to our community, and its selection of our city demonstrates that Little Rock is a great place to live, work and play."

The news release did not designate a location for the venue, or indicate when it would be expected to open.

Scott, in comments he made on local radio stations discussing the announcement, ruled out the location he had coveted -- Little Rock's War Memorial Park. But the mayor said city commercial real estate professionals have been working with Topgolf to identify a suitable site.

If the Topgolf venue in Rogers is any indication, the Interstate 30/430 interchange in Southwest Little Rock, which is home to a retail development anchored by Bass Pro Shops, would be as good as location as any in the city.

The Rogers location is along an interstate and is also near a Bass Pro Shops and a Dave and Buster's. Both are located at the Little Rock interchange, too.

Chris Moses, a principal and chief executive officer and president of Moses Tucker Partners, a top commercial real estate firm, isn't involved in the project but agreed that the I-30/430 interchange was the best location for the venue.

"Ultimately, I think there were probably only 2 maybe 3 serious locations that would really work for TG," Moses said in an email. "Bass Pro area is probably the best location for many reasons, but specifically due to the interstate access, visibility and 30-minute drive time has population densities close to [1 million people] and close proximity to Pulaski/Saline counties."

War Memorial Park would be second, "but I think the site would have too much pushback from the community due to taking a public park/golf course and converting it to private use," he said. "The last location I'd look at would be between LR and NLR (off 167/McCain area). Not many specific locations in this area, but the demographics, traffic counts and linkages are certainly plentiful over there."

It was also unclear Wednesday what, if any, economic or financial inducements were offered to secure a Little Rock Topgolf location. Efforts to reach representatives of the city and the company weren't successful Wednesday afternoon.

Some cities have provided incentives. Birmingham, Ala., agreed to provide $1.5 million in incentives to Topgolf entertainment complex over eight years in 2016, according to al.com, an online news source for the state.

The payments will be made in annual installments, not to exceed $228,000, according to the account. Each payment is equal to 30% of the sales tax revenue generated to the city by the project.

The company also failed to open an announced location in New Orleans.

Topgolf, which features a driving range for point-scoring golf games using microchipped balls, opened its Rogers' location in 2020 on an 11-acre site in the Pinnacle Hills area and adjacent to the Walmart Arkansas Music Pavilion on South J.B. Hunt Drive. The company announced its Arkansas venture in 2018.

Topgolf's Rogers location has two floors with 72 driving bays, a full bar and food menu, and a huge TV screen.

Topgolf looks like a driving range but patrons can compete in a setup similar to bowling. In general, the goal is for players to hit golf balls to various targets.

Six to eight people can be in each driving bay and pay by the hour.

Topgolf was founded by twin brothers Steve and Dave Jolliffe in 2000, when they developed the first three locations in the United Kingdom. U.S. licensee WestRiver Group brought the brand to the states in 2005 with the opening of Topgolf Alexandria in Virginia. More investors have since come on board, opening dozens of locations across America.