What overturning Roe v. Wade would mean for Arkansas 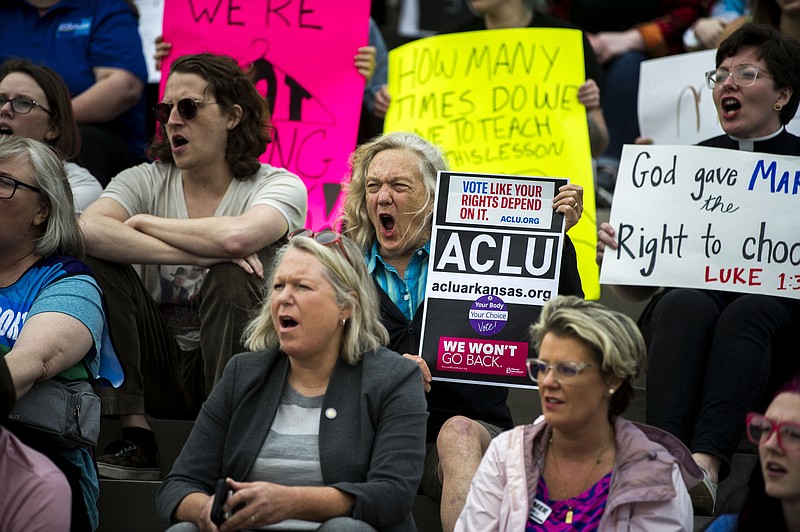 Sally Fittsizer, center, with the Little Rock Noise Brigade, chants with other protesters during a demonstration on the steps of the Arkansas State Capitol in response to a leaked Supreme Court decision overturning Roe V. Wade on Tuesday, May 3, 2022. See more photos at arkansasonline.com/54abortion/..(Arkansas Democrat-Gazette/Stephen Swofford)

The leak of a draft opinion from the United States Supreme Court signaling justices’ intent to overturn Roe v. Wade created swift and impassioned responses from Arkansas officials and activists on both sides of the abortion issue.

Here’s what you need to know about the present and future of access to abortion in the state.

What is the current law around abortion in Arkansas?

As of today, abortions are allowed in Arkansas up to 22 weeks gestation, said Holly Dickson, executive director of the ACLU of Arkansas.

That is counted from the first day of a pregnant person’s most recent menstrual period and is generally the equivalent of about 20 weeks after conception, according to the Guttmacher Institute.

Some abortions are also allowed after that point, according to the institute, but only in cases of life endangerment, rape, incest or severely compromised physical health.

A person cannot be denied an abortion based on the reason they are seeking one.

Providers are required by law to tell pregnant people certain information about the procedure during an initial appointment and make the patient wait 72 hours before performing the abortion at a separate appointment.

There are other restrictions on abortion that state legislators have passed in recent years, but they are currently on hold while court cases continue.

What would happen in Arkansas if Roe v. Wade was overturned?

If Roe v. Wade was overturned, states would have the power to make abortions illegal.

Arkansas already has a “trigger law” that states if Roe and a related court case called Planned Parenthood v. Casey were ever overturned, abortions would become illegal except in instances to save a pregnant person’s life.

All that would be required for the trigger law to go into effect is the attorney general certifying that the core holdings of Roe and Casey have been overruled.

This week, Attorney General Leslie Rutledge vowed she would certify that the law’s criteria has been met if the draft opinion leaked this week became official, which would put the trigger law into effect.

If the draft opinion became official, would it affect anything other than abortion?

Civil rights activists are concerned that opinion in the draft would open the door to overturning other landmark cases.

Ali Taylor, co-founder and president of the Arkansas Abortion Support Network, said she is particularly concerned about the future of contraceptive access, marriage equality and other civil rights.

Read more about Rutledge’s comments on the trigger law and other responses from Arkansans on both sides of the issue, from a team of our reporters.

CORRECTION: A previous version of this story misstated which official must certify the conditions of the trigger law have been met for it to go into effect. The official who must certify is the attorney general.