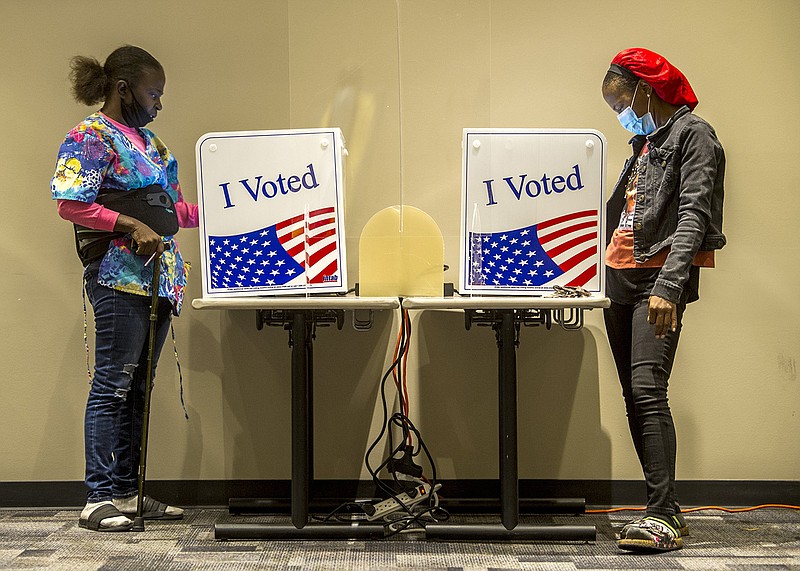 Yolanda Wright, left, and her daughter LaStrease Lewis vote on a 0.5-mill property-tax increase at the Pulaski county regional building in Little Rock on the last day of early voting on Monday, Nov. 8, 2021. (Arkansas Democrat-Gazette/Stephen Swofford)

Arkansans wishing to cast a ballot must meet the requirements of the state's voter ID law.

Here’s what you need to know about the the documentation you’ll need at your polling place.

What do I need to bring when I vote?

Under Act 633 of 2017, a voter in Arkansas is required to verify their voter registration at their polling place by presenting a federal or state-issued document or identification card that includes their name and a photograph.

Acceptable forms of ID include:

Arkansans who don’t have any of those forms of ID can request a voter verification card from their county clerk’s office by providing the necessary documentation to prove their identity and address, Arkansas secretary of state’s office spokesman Kevin Niehaus said.

Residents of long-term care or residential care facilities aren’t required to present ID cards, but they must provide documentation from the facility’s administrator attesting that they live there.

What if I forget my ID or don’t have one?

If a voter is unable to verify their voter registration at the polling site, they can cast a provisional ballot, meaning they’ll have to return to the county clerk’s office or board of election commissioners by noon on the Monday following the election and present the required ID or documentation.

In 2021, Arkansas legislators removed a provision in state law that allows voters without IDs to complete a sworn statement affirming that they are registered to vote in the state.

The legislation, Act 249, is the subject of an ongoing lawsuit arguing that it and three other laws create an undue burden for voters. A Pulaski County judge issued a ruling blocking the laws, but the Arkansas Supreme Court later issued a stay of that ruling while it's appealed. That means the laws are in effect for now.