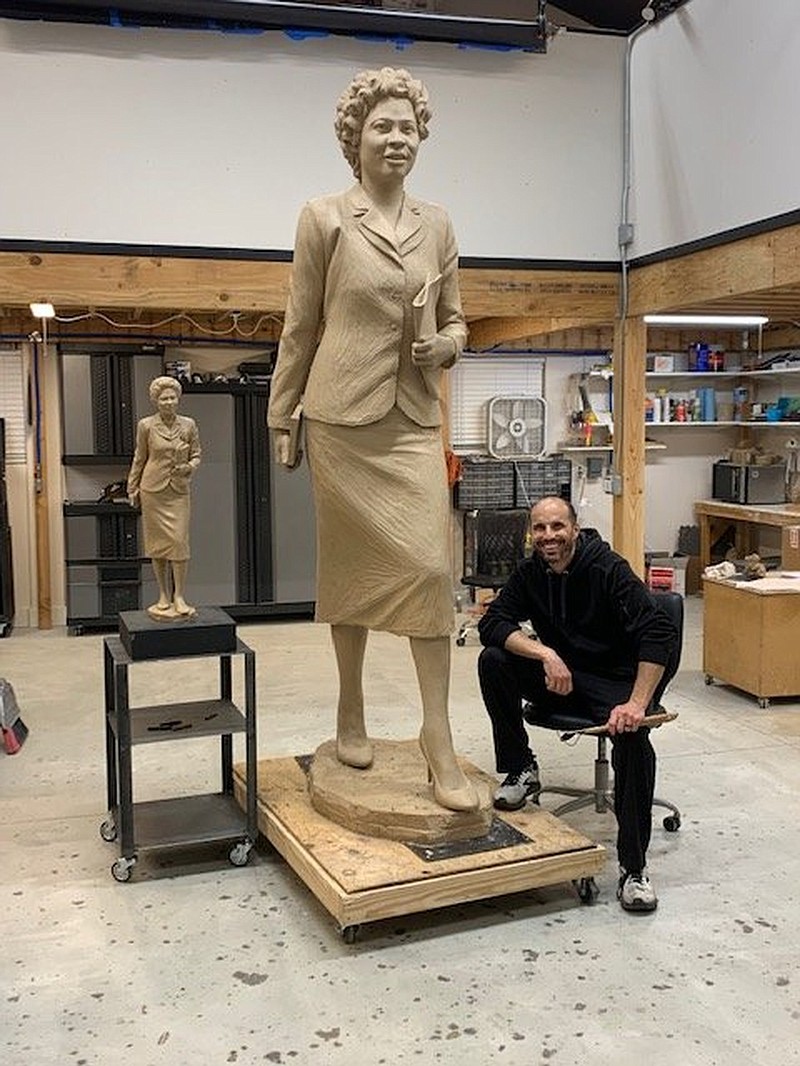 A documentary from Arkansas PBS will tell the story behind the bronze sculptures of Daisy Bates and Johnny Cash to be displayed in the United States Capitol's Statuary Hall.

Kevin Kresse of Little Rock and sculptor Benjamin Victor of Boise, Idaho, were awarded commissions in June to create likenesses of Cash and Bates, respectively. The new statues were approved under under Arkansas' Act 1068 of 2019.

The film will document the work of Kresse and Victor, and will go into detail about the legacies of civil rights activist Bates and musician Cash.

"It's a documentary about Kevin and Ben and their process and all of the things that went into these commissions," Willis says. "But at the forefront I want it to be about Daisy Bates and Johnny Cash -- who these people are and what it says about Arkansas that these are the two folks that are going to represent the state in Statuary Hall."

Bates grew up in Huttig and was a mentor to the nine students who integrated Little Rock Central High School in 1957. She and her husband, L.C. Bates, published the Arkansas State Press newspaper, which focused on civil rights and issues in the Black community. They were active in the NAACP, and Daisy Bates was the only woman to speak during the official program at the 1963 March on Washington.

Cash, who was born in Kingsland and grew up in the farming community of Dyess, became one of the most successful and influential musicians of the 20th century, helping kickstart the rock 'n' roll era with his recordings for Memphis-based Sun Records before becoming a popular force in country music as well as an advocate for prisoners' rights and other causes.

The new statues will replace those of attorney Uriah Rose, a secessionist; and U.S. Sen. and Gov. James P. Clarke, who advocated for white supremacy; which have stood in Statuary Hall for more than a century.

Willis is from Greenville, S.C., and splits his time between Arkansas and Louisiana. The new documentary is not his first for Arkansas PBS. In "Rap Squad," which won a Mid America Emmy Award, he followed students who belonged to a music-making club at Central High School in Helena-West Helena. Their stories were set against a contentious millage vote in the community to build a new school. His "7 Days" is a chilling look at the opioid crisis in Arkansas.

Courtney Pledger, Arkansas PBS Executive Director and CEO, says the film will document "a story of artistic creation, but also an unfolding human story. There are those players behind the scenes and the visionaries. There are the artists, and the human figures of Daisy Bates and Johnny Cash and all the things they achieved in their lives and how they inspired these works of art."

The initial plan called for two short films about each of the statues, but Victor suggested a feature combining both, Pledger says.

Victor's statue of Bates will be his fourth work at Statuary Hall, and he's been the subject of documentaries for the other three works -- Chief Standing Bear, Nebraska; Norman Borlaug, Iowa and Sarah Winnemucca, Nevada.

Last week, he brought his eight-foot-tall Bates statue, still in clay, from Boise to the sculpture studio at the University of Arkansas Little Rock's Windgate Center of Art + Design, where he continued to work on it and also greeted visitors, including representatives of the L.C. and Daisy L. Bates Museum Foundation.

"It's important to allow the public to be a part of this creative process and see the clay in progress," he says.

His stay in Arkansas also allowed Willis to shoot footage of the artist working and meeting with visitors. Willis says he also plans to travel to Boise to film more with Victor.

The director has filmed Kresse at home and at the 7th Street Mural Project in Little Rock, where Kresse has painted.

"Nathan is so easy to be with," he says. "He's very laid-back. I also like that he works by himself, so there's not a crew following me around that would make me too self-conscious. I'm excited about working with him."

Interviewing Kresse and Victor has given Willis a different perspective on storytelling.

"As a filmmaker, I think of telling stories through sequences, audio, video, motion. I have so much respect for Benjamin and Kevin, who are telling the story of Johnny Cash and Daisy Bates through a singular pose."

There is hope that the statues will be completed and unveiled in Washington in December, Willis says, and he plans to be there with his camera. If that timeline holds up, Pledger and Willis say the documentary could air in the spring.

"I'm hoping to get most of it shot this summer," Willis says. "I'll be filming more interviews with Kevin and Ben. I'll film through December and will probably be editing along the way. There should be no problem with being done by January or February, at least with the rough cut."

CORRECTION: Johnny Cash was born in Kingsland. His birthplace was misidentified in an earlier version of this story.