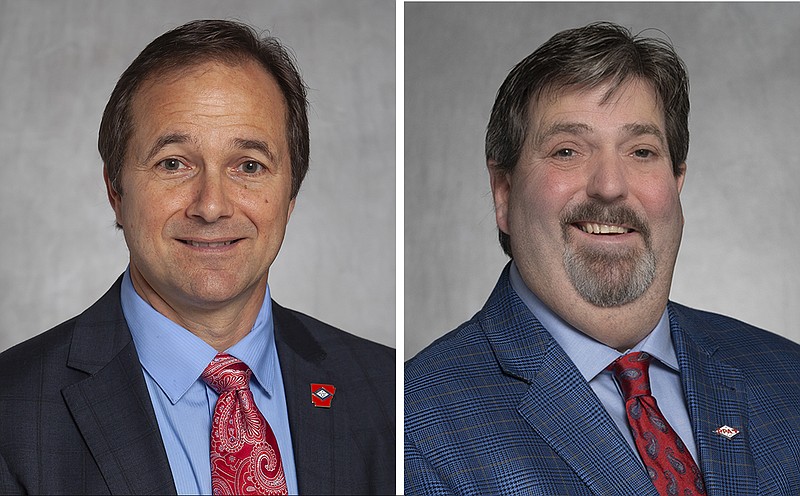 FAYETTEVILLE -- Rural Crawford and Washington counties are poised for growth, said a state Senate candidate who is both a real estate developer and a certified public accountant.

Jim Petty of Van Buren is running for the Republican nomination in state Senate District 29. This district covers all of Crawford County along with southern and eastern Washington County, reaching as far north as the Mayfield community. Petty spoke at a candidate forum hosted by the Fayetteville Chamber of Commerce. His primary opponent, Warren Robertson of Alma, did not attend. The winner of the May 24 primary faces no general election opposition on Nov. 8.

Northwest Arkansas' larger metro areas are filling up, Petty said. Growth will shift to nearby rural areas, but infrastructure needs there must be met first, he said. For instance, there are residents of Mountainburg in Crawford County who have access to high-speed internet but not to piped, treated water, he said. Van Buren, where he is a City Council member, has the opposite problem, he said. It was one of the first developed towns in the region but now its infrastructure is old, he said.

There are no CPAs in either the House or the Senate, the Arkansas Society of Certified Professional Accountants has confirmed. There is a good reason for that, Petty said. "Legislative sessions take place at the same time as tax season," he said. He will be able to serve because he is mainly a real estate developer now, but maintains his CPA certification. "I worked too hard to pass that test to let it lapse," he quipped.

"I have no agenda," Petty said. What convinced him to run was the desire to make a difference for the sake of his 2-year-old granddaughter who lives with her family in Fayetteville, he said. "She's the only one who could have convinced me to run," he said of his granddaughter.

Petty has never served in the Legislature but has frequently dealt with state government, particularly as an advocate for Boys and Girls Clubs, he said. "I see the difference they make," he said of the clubs.

A planned new bridge over the Arkansas River for I-49 and a proposed new river port in Van Buren will be a boon to the whole Northwest Arkansas area, he said.