Back to normal: Full house for Derby with no limits 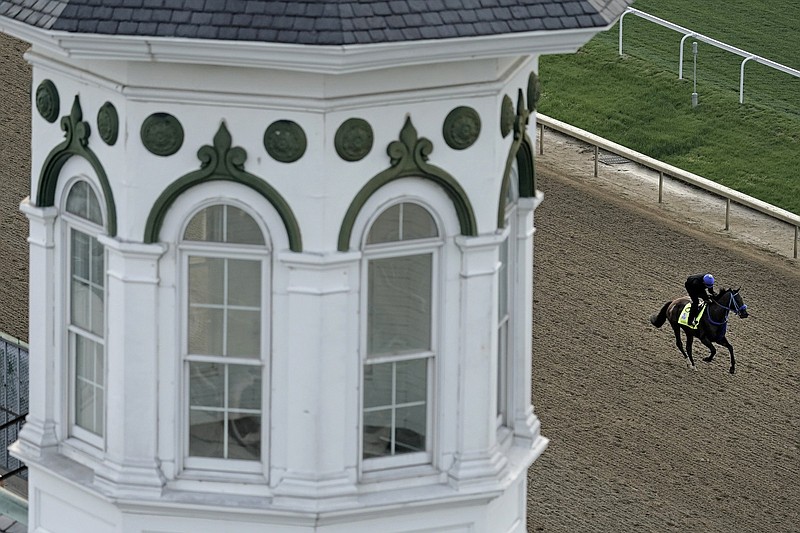 Kentucky Derby entrant Simplification passes one of the twin spires at Churchill Downs during a workout Thursday at Louisville, Ky. Simplification is scheduled to be one of 20 starters in today’s Kentucky Derby, the first full field for the event in three years. More photos available at arkansasonline.com/57derbyprep/. (AP/Charlie Riedel)

LOUISVILLE, Ky. -- Twenty eager colts breaking from the starting gate, a full house for the first time in three years, and a Kentucky Derby lacking a dominant favorite.

Things could get interesting today at Churchill Downs, where the winners in 2019 and 2021 were disqualified.

The biggest question for these 3-year-olds is whether they can handle running 11/4 miles while jostling for position in front of the biggest crowd they'll ever see and hear.

"Things can get a little dodgy throughout the race, having to go through holes and take dirt and take some bumps along the way," trainer Chad Brown said. "You just never know what's going to happen when you open the gate."

Zandon is the early 3-1 favorite and breaks from the No. 10 post, which has produced the second-most winners with nine. The dark bay colt is trained by Brown, seeking his first Derby win after six losses.

"It would mean everything," said Brown, who has had his own stable for 15 years. "It's so hard to get these Derby horses, especially the favorite."

After two years of covid-19 restrictions, the Derby returns in all its noisy, colorful glory. Attendance is back to full capacity, which means about 150,000 people jammed into Churchill Downs, dressed to the nines and fortified by mint juleps served in souvenir glasses. Post time is 5:57 p.m. CDT.

In 2019, winner Maximum Security was disqualified for interference and Country House wore the garland of red roses.

In 2020, an eerie silence enveloped the track when no fans were allowed because of the pandemic and the race was pushed back to September. Last year, the Derby returned to its usual spot on the first Saturday in May with attendance limited to about 52,000.

Steve Asmussen has won more races in North America than any other trainer, but he's never won the Derby in 23 tries. He'll saddle Epicenter, the early 7-2 second choice that earned his first career victory at Churchill Downs last fall.

"You have no control over how 20 3-year-olds will handle this volume of crowd for the first time," Asmussen said. "None of them obviously has been in a race that's had that many runners in it."

The 148th Derby is missing horse racing's household name: Bob Baffert. The Hall of Fame trainer with a record-tying six victories was banned by Churchill Downs this year and next after last year's winner, Medina Spirit, flunked a post-race drug test.

Baffert's shadow still looms large over the Twin Spires. Two colts previously trained by him will be in the starting gate: Messier, the early 8-1 third choice named for hockey Hall of Famer Mark Messier, and 12-1 shot Taiba.

Taiba, the least experienced colt in the field, has the most experienced jockey on his back in 56-year-old Mike Smith. He could break Bill Shoemaker's record as the oldest winning jockey.

"If I can knock out a good clean trip for him then inexperience won't get in the way so much," Smith said.

"We're going to need some luck, like every horse in the Derby does," Yakteen said.

Baffert told The Associated Press he plans to watch the race remotely with family and friends.

"I want to see the same race start to finish that we saw in the UAE Derby," Shintani said, "including the being first across the wire part."

Louisville-born Brad Cox won his first Derby belatedly when Mandaloun was elevated to first place after Medina Spirit's disqualification in February. Cox has three shots to make the winner's circle in person this year: Cyberknife, Tawny Port and Zozos.

"I don't think it's going to be a blazing, blazing hot pace," Cox said.

"Touch wood we're going to shock the world," he said.

Today's forecast calls for a 30% chance of morning showers and then mostly cloudy skies and a high of 64 degrees. 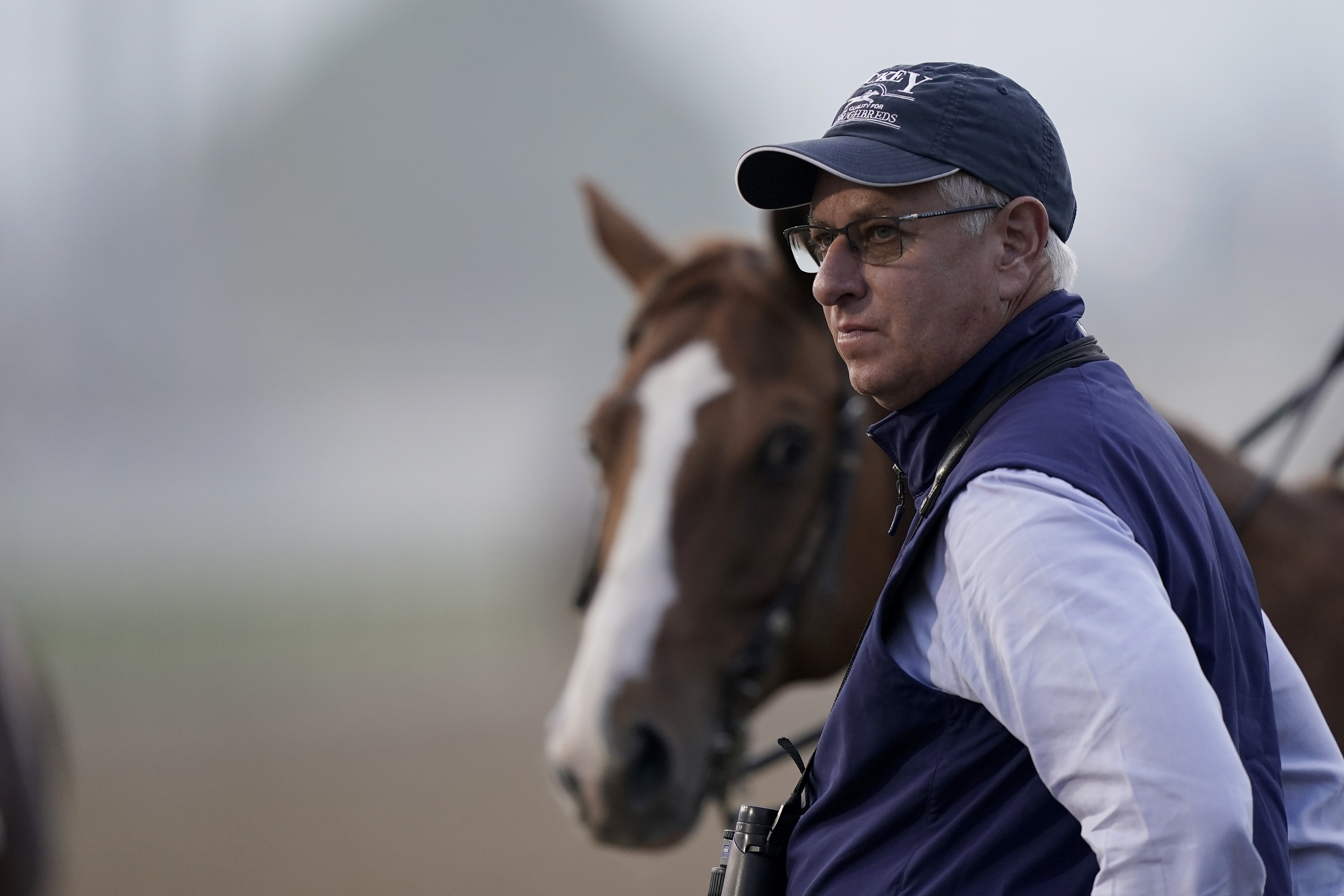 Trainer Todd Pletcher watches horses workout on the track at Churchill Downs Friday, May 6, 2022, in Louisville, Ky. The 148th running of the Kentucky Derby is scheduled for Saturday, May 7. (AP Photo/Charlie Riedel) 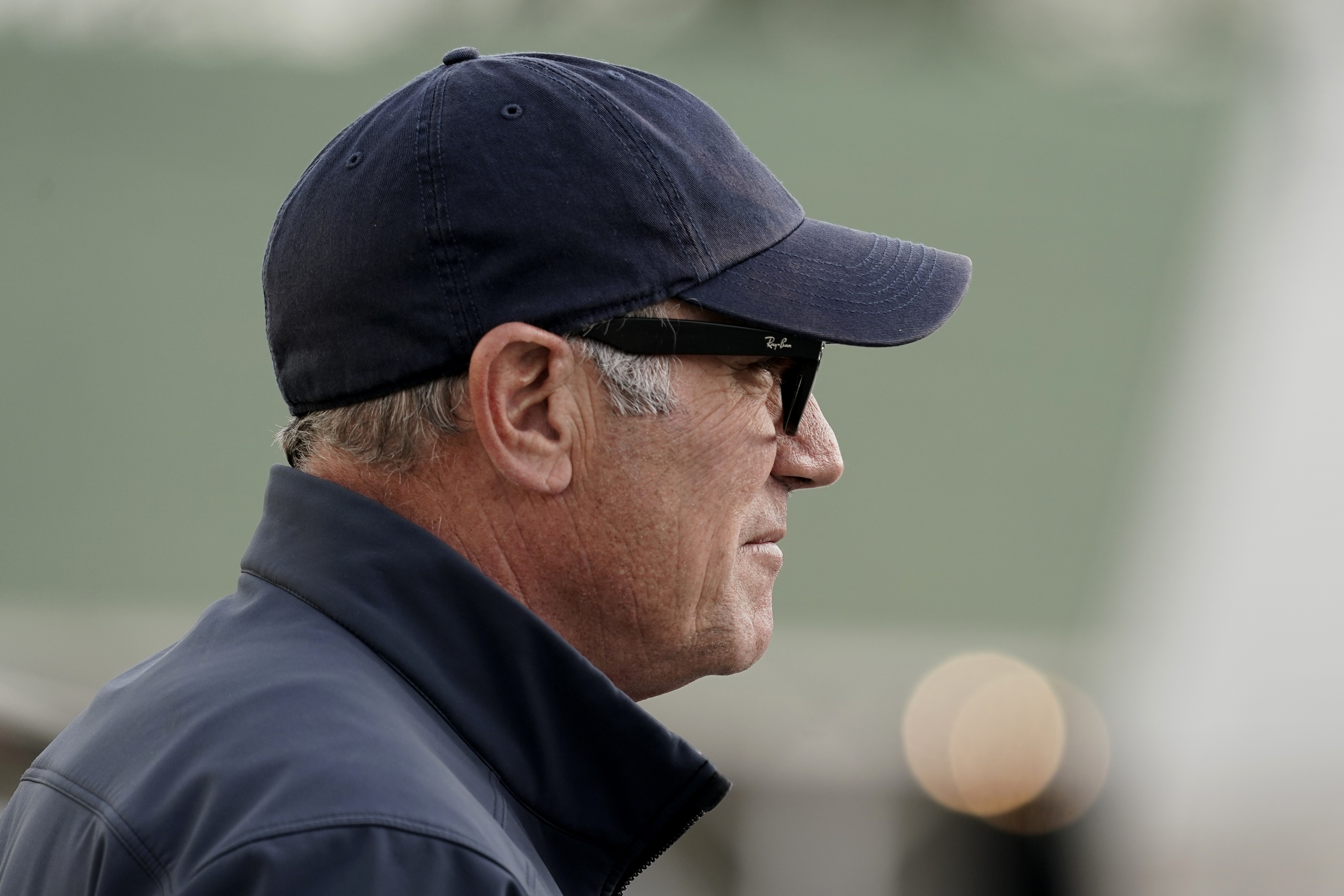 Horse trainer Tim Yakteen looks out from his barn after a workout at Churchill Downs Thursday, May 5, 2022, in Louisville, Ky. The 148th running of the Kentucky Derby is scheduled for Saturday, May 7. (AP Photo/Charlie Riedel) 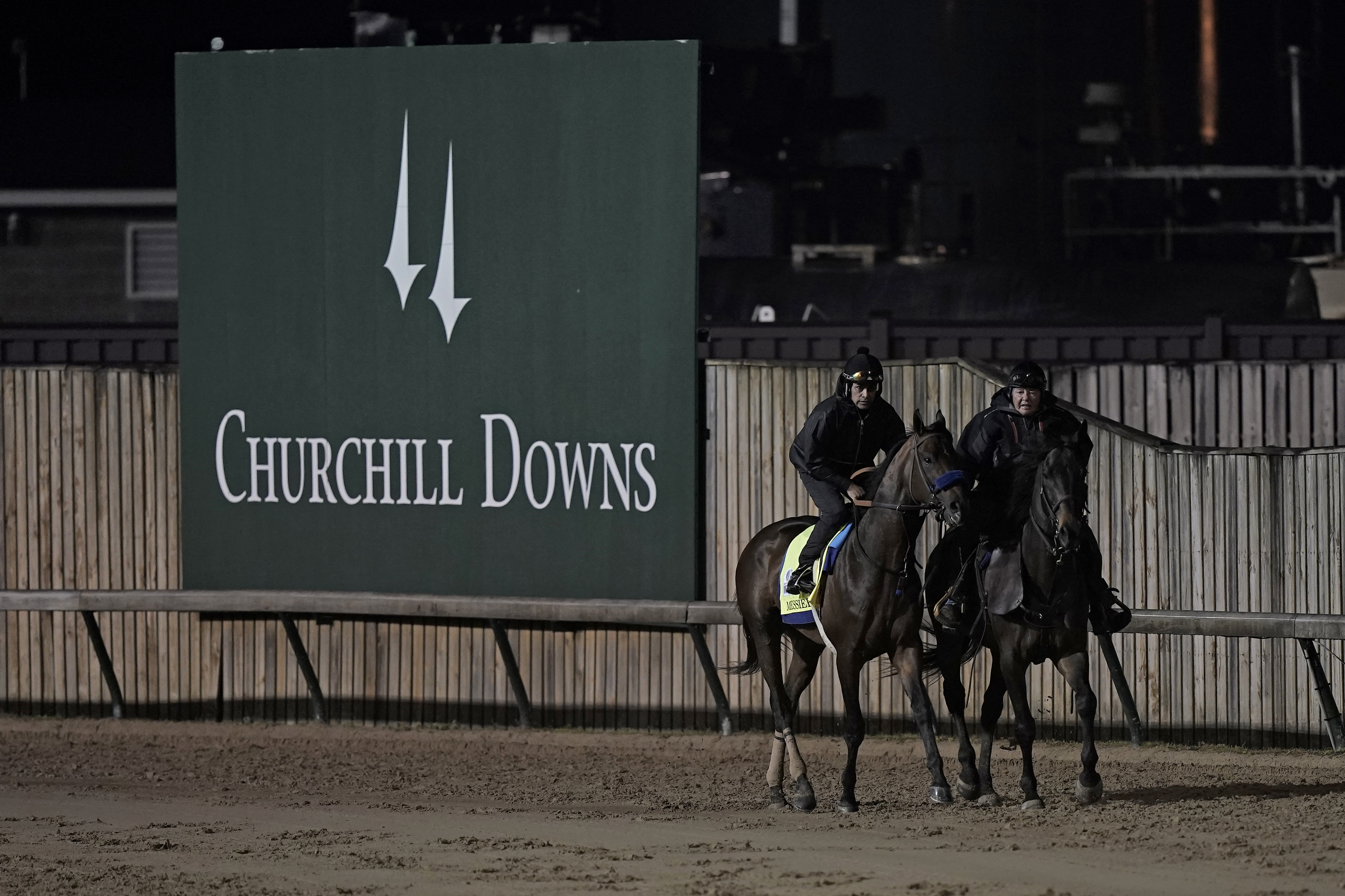 Kentucky Derby entrant Messier works out at Churchill Downs Friday, May 6, 2022, in Louisville, Ky. The 148th running of the Kentucky Derby is scheduled for Saturday, May 7. (AP Photo/Charlie Riedel) 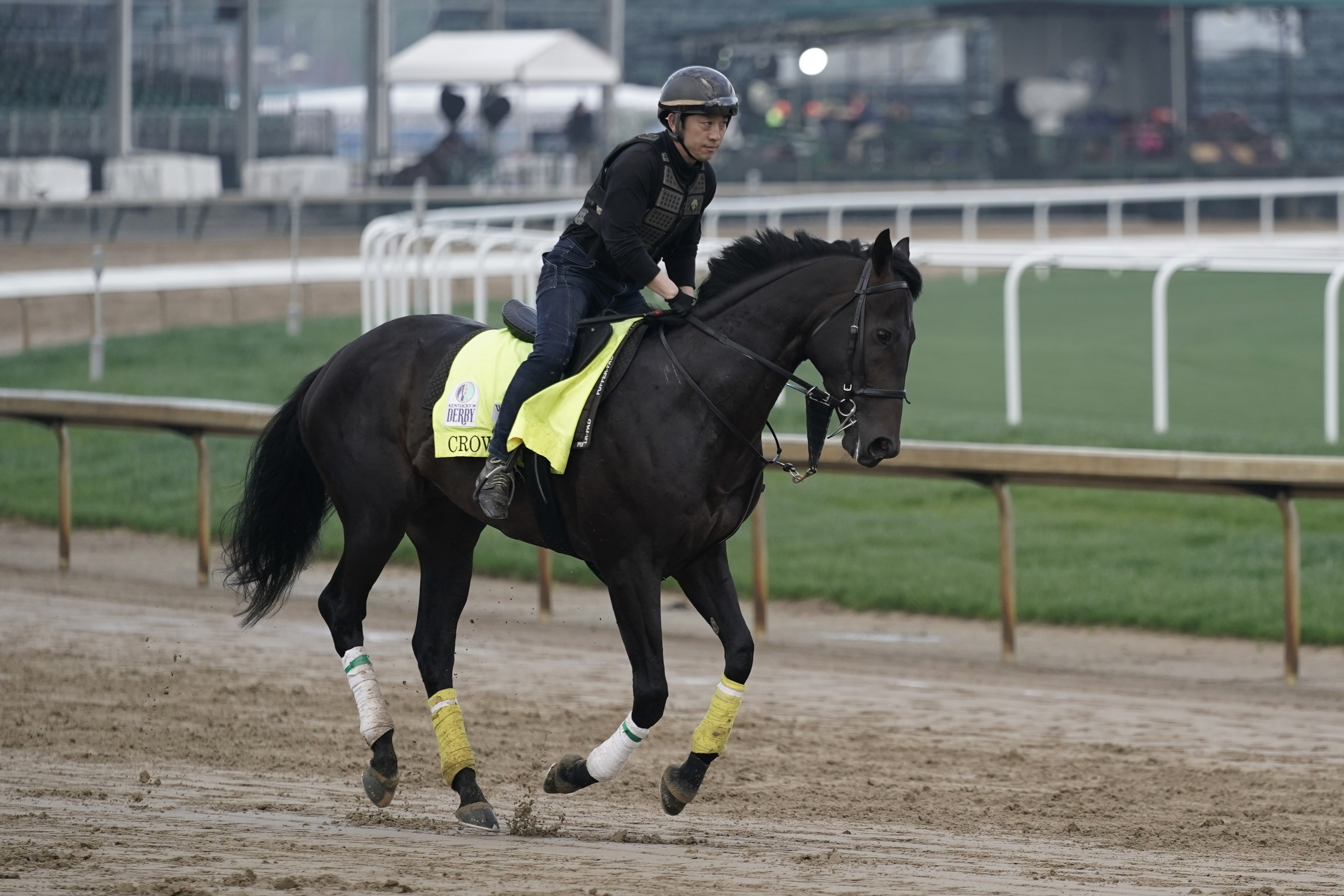 Kentucky Derby entrant Crown Pride is ridden by exercise rider Maso Matsuda during a workout at Churchill Downs Friday, May 6, 2022, in Louisville, Ky. The 148th running of the Kentucky Derby is scheduled for Saturday, May 7. (AP Photo/Charlie Riedel) 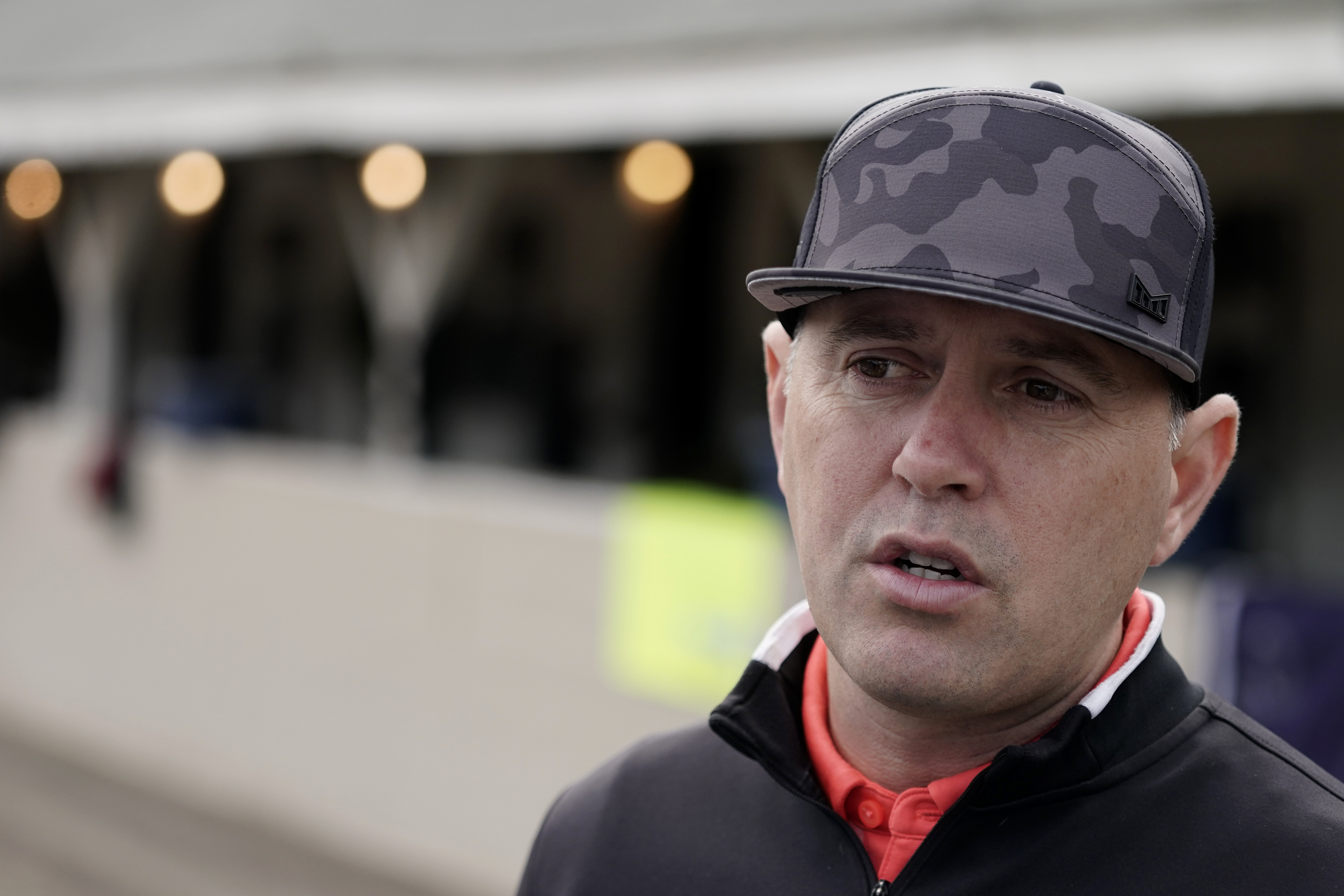 Trainer Chad Brown talks to the media after a workout by Kentucky Derby entrant Zandon at Churchill Downs Tuesday, May 3, 2022, in Louisville, Ky. The 148th running of the Kentucky Derby is scheduled for Saturday, May 7. (AP Photo/Charlie Riedel) 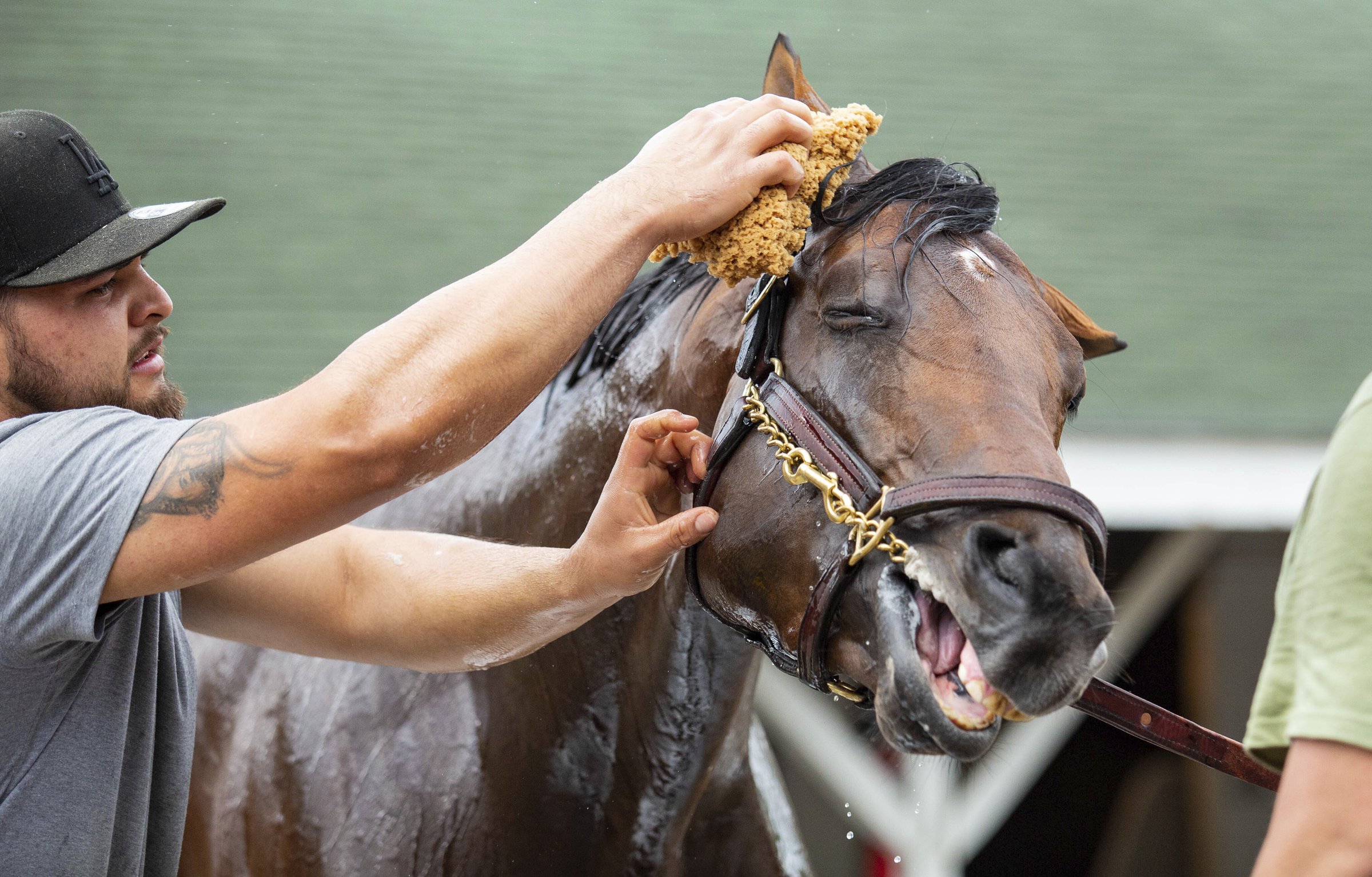 Epicenter, one of 20 starters for today’s Kentucky Derby, gets a bath after a workout earlier this week. (AP/Grace Ramey)

Print Headline: Back to normal