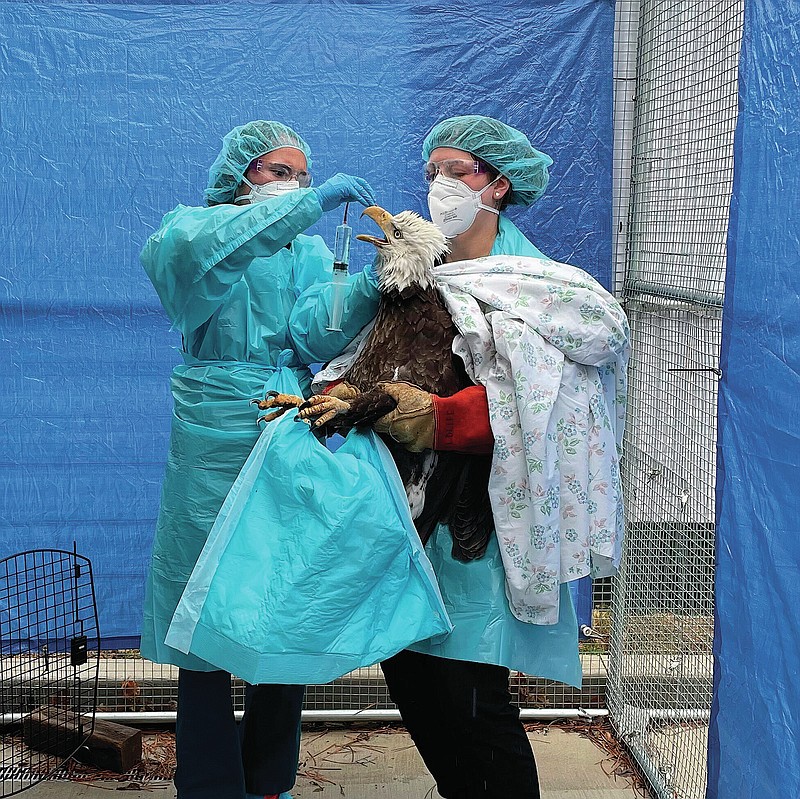 In this photo provided by the Wisconsin Humane Society, two people at the humane society's Wildlife Rehabilitation Center in Milwaukee provide care to a female bald eagle that later tested positive for the avian influenza, April 8, 2022. The female bird had been captured earlier in the day from a lakeside neighborhood after neighbors noticed it on the ground beneath the nest. The U.S. Fish and Wildlife Service reports this new avian influenza strain has been found in 33 states, with eagles affected in at least 15. Officials also say the bird flu is more widespread and affecting more wild bird species compared to the last outbreak in 2015. (Wisconsin Humane Society via AP)

OMAHA, Neb. -- Bird flu is killing an alarming number of bald eagles and other wild birds, with many sick birds arriving at rehabilitation centers unsteady on their talons and unable to fly.

"It's quite a sight to see an eagle with a 6-foot wingspan having uncontrollable seizures because of highly pathogenic avian influenza," said Victoria Hall, executive director of the University of Minnesota's Raptor Center. "At that point, they're so far into the disease there's no treatment options left."

The latest outbreak of the highly contagious virus has led to the culling of about 37 million chickens and turkeys in U.S. farms since February, and the U.S. Department of Agriculture has confirmed 956 cases of bird flu in wild birds, including at least 54 bald eagles. But the actual number is likely significantly higher because not every wild bird that dies is tested and the federal tally doesn't include cases recorded by wildlife rehabilitation centers.

The latest reported toll is nearly 10 times higher than the 99 confirmed cases in wild birds during the last bird flu outbreak in 2015. This time, the virus has been detected in birds in 34 states, indicating it is far more widespread than seven years ago.

"This is definitely an unprecedented event," said researcher Rebecca Poulson, who has been studying avian influenza for 15 years at the University of Georgia's Southeastern Cooperative Wildlife Disease Study. "The number of birds and species and states already in which it has been detected is pretty alarming."

Water fowl including ducks and geese, which typically carry the virus, and the raptors and scavengers that feed on them are the most commonly sickened birds, but cases have been confirmed in more than three dozen species. Ducks and geese are usually able to live with the virus without getting sick, but the latest variant is proving more contagious and more deadly.

Nearly 61% of the 188 birds the rehabilitation center has tested since late March have had bird flu, and all but one of those died. Hall said the center had to set up an area where workers wearing protective gear test sick and injured birds for avian influenza and quarantine them before bringing them into the center, to avoid infecting other birds.

None of the 114 positive cases the center has recorded, including 28 bald eagles, are included in the USDA count, Hall said. She said a great horned owl recovered from the virus, giving her hope that some wild birds may be able to fight it off.

USDA officials haven't responded to questions about why they are excluding the data from rehabilitation centers.

Scientists estimated in a study published three years ago that the number of wild birds in North America had fallen by nearly 3 billion since 1970 as humans continue to encroach on their habitat. But it's too soon to know what impact the bird flu will have on bird populations because the outbreak is ongoing and there hasn't been enough time to study it, according to U.S. Fish and Wildlife Service veterinarian Samantha Gibbs and other experts.

"We're quite concerned. I think that we're going to be watching very carefully what the mortality rates are throughout the spring and summer," Gibbs said.

Gibbs and Poulson said they fear the virus could survive the summer, when it usually dies off, leading to fall infections when migratory birds return south. That happened in Europe, where the virus is circulating first.

Bald eagles -- the U.S. national symbol since the 1700s -- are among America's most celebrated conservation success stories. With an estimated 300,000 bald eagles in the country today -- a population that quadrupled between 2009 and 2021 -- the bird was removed from the U.S. Endangered Species List in 2007. Given that, experts believe the species should weather the impact of this virus.

State and federal officials will track the success of nesting eagles this spring and summer to gauge the impact of the virus.

In Georgia, where three bald eagles that died tested positive for bird flu, the state Department of Natural Resources has documented a sharp drop in bald eagle reproduction this year in six coastal counties where many migratory birds spend the winter. Fewer than half of the 73 nests found there produced offspring, while nests elsewhere in the state had a success rate close to the average of 78% recorded in recent years.

Some experts, including Hall, suggest that residential bird feeders should be removed to avoid further spread of the virus, but the USDA and the U.S. Fish and Wildlife Service haven't recommended that because bird flu isn't common among the songbirds that frequent backyards. Still, they say it's important to regularly clean bird feeders to help limit the spread of other diseases.

"Wild birds could use all the help they can get right now," Hall said.

When the virus is found on poultry farms, officials slaughter entire flocks to curb the spread, even when most birds have no symptoms. So far, 37.36 million birds have been killed in 32 states.

Health officials also say bird flu doesn't represent a significant health risk to people, even though one human case of the disease was confirmed in Colorado last month. Officials say people are unlikely to catch the virus unless they have prolonged direct exposure to infected birds. 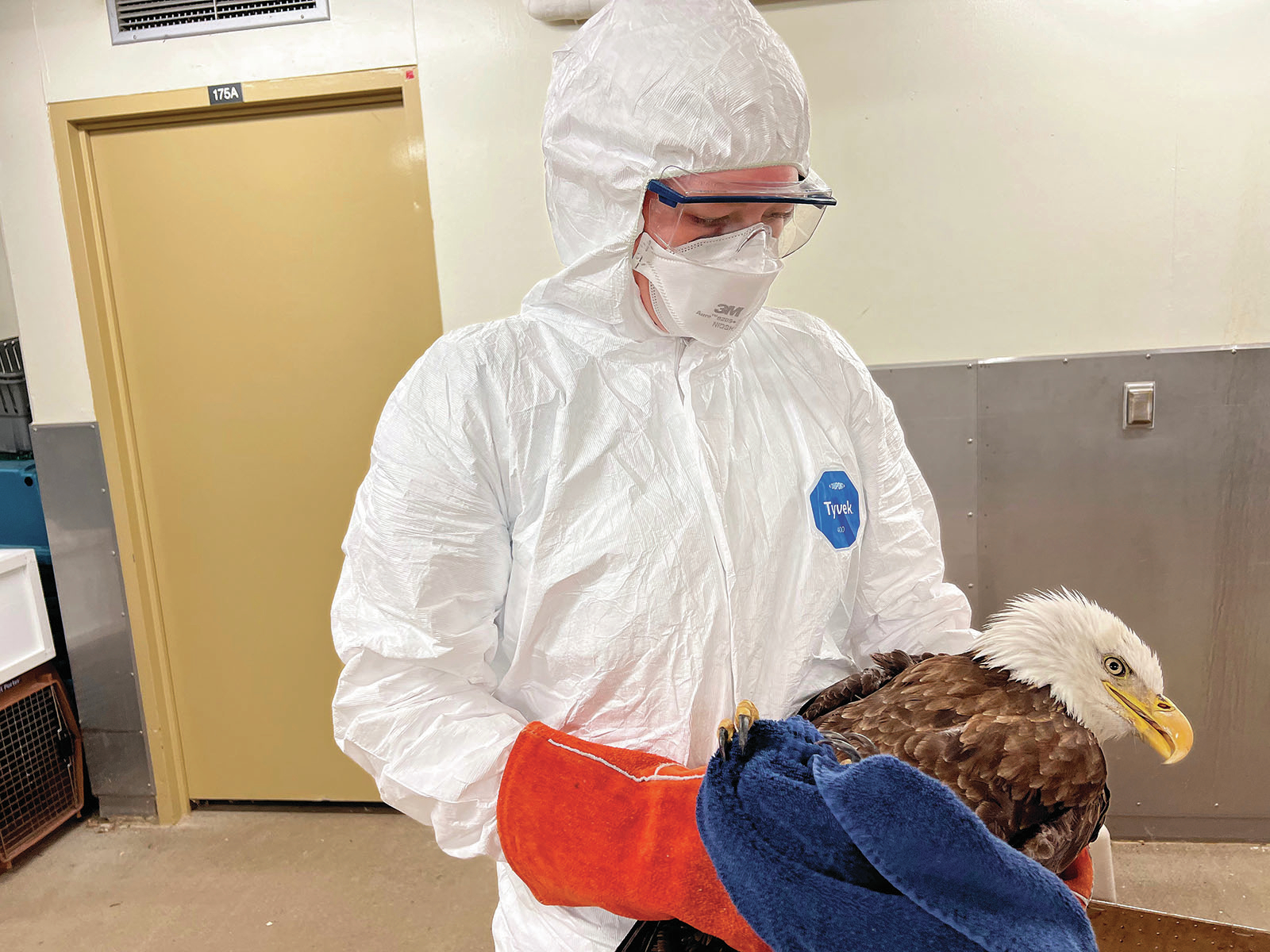 In this photo provided by The Raptor Center, a bald eagle receives care in a special quarantine area the center set up for possible avian flu cases in St. Paul, Minn., March 29, 2022. The U.S. Fish and Wildlife Service reports this new avian influenza strain has been found in 33 states, with eagles affected in at least 15. Officials also say the bird flu is more widespread and affecting more wild bird species compared to the last outbreak in 2015. (The Raptor Center via AP) 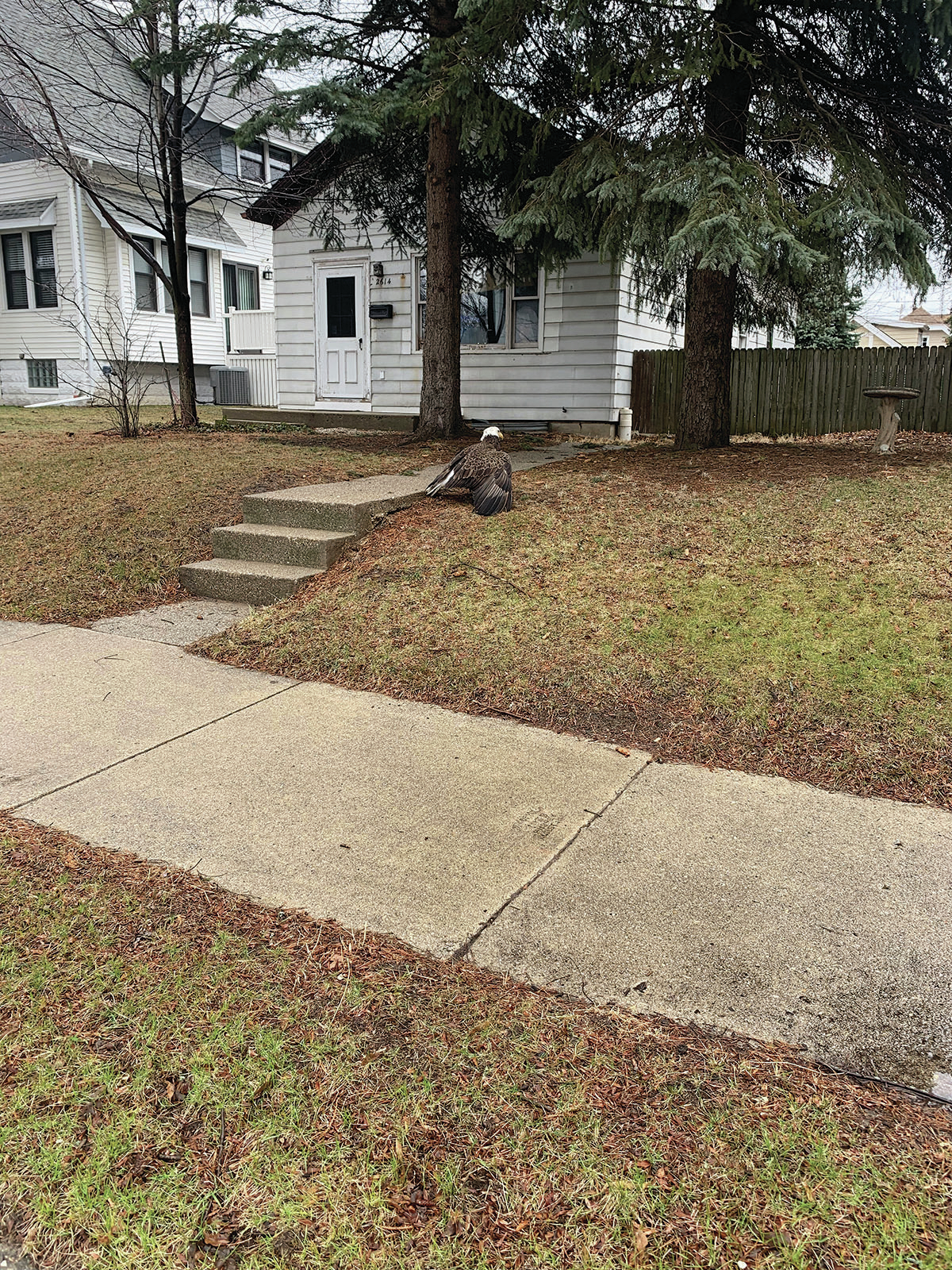 In this photo provided by Tracey Blaszczyk, a female bald eagle that seemed ill is seen beneath her nest in Milwaukee, April 8, 2022. She was euthanized the next day after her health deteriorated and she later tested positive for the avian influenza. The U.S. Fish and Wildlife Service reports this new avian influenza strain has been found in 33 states, with eagles affected in at least 15. Officials also say the bird flu is more widespread and affecting more wild bird species compared to the last outbreak in 2015. (Courtesy of Tracey Blaszczyk via AP) 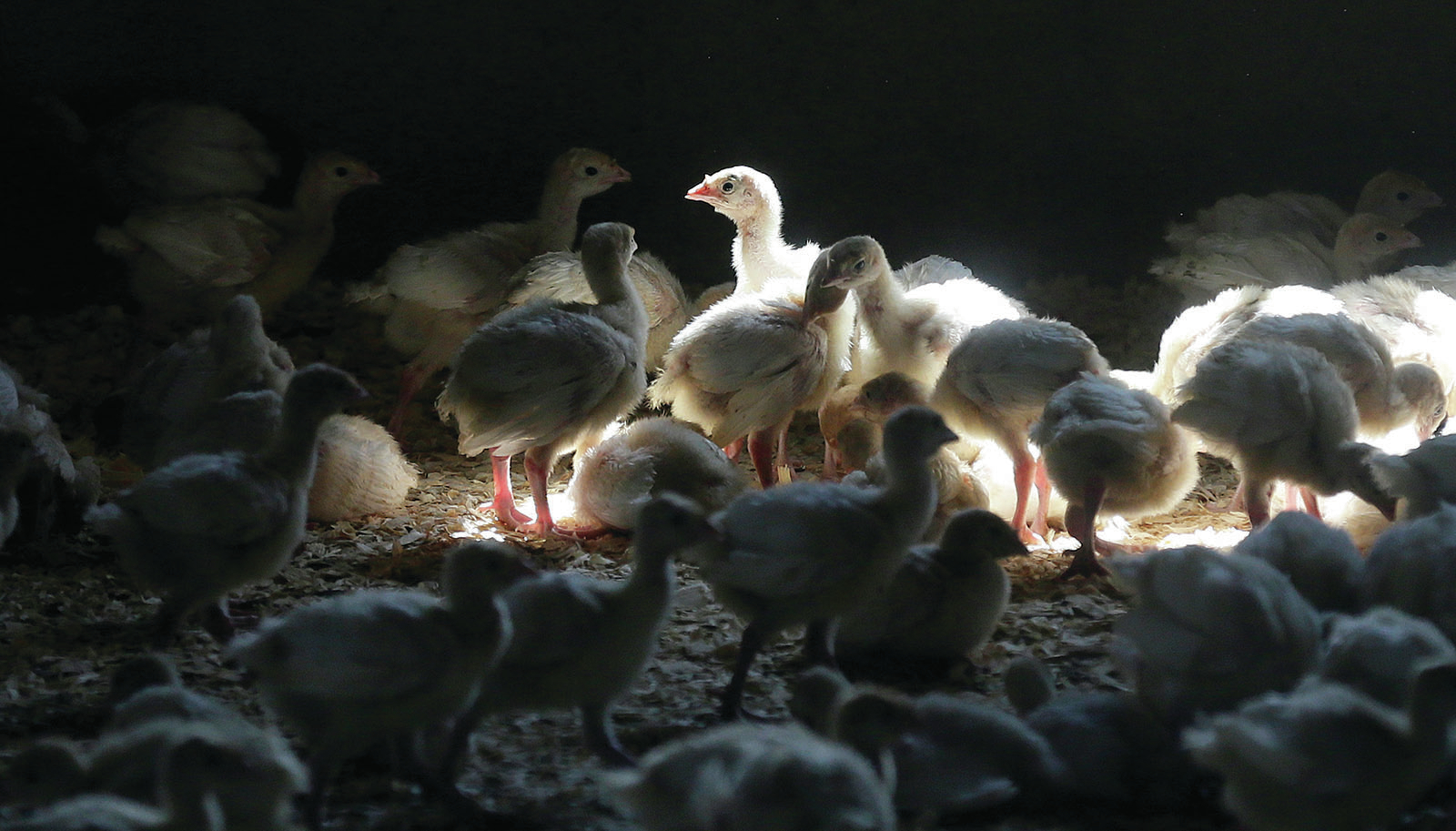 FILE - A flock of young turkeys stand in a barn at the Moline family turkey farm after the Mason, Iowa farm was restocked on Aug. 10, 2015. Farms that raise turkeys and chickens for meat and eggs are on high alert, fearing a repeat of a widespread bird flu outbreak in 2015 that killed 50 million birds across 15 states and cost the federal government nearly $1 billion. The new fear is driven by the discovery announced Feb. 9, 2022, of the virus infecting a commercial turkey flock in Indiana. (AP Photo/Charlie Neibergall, File) 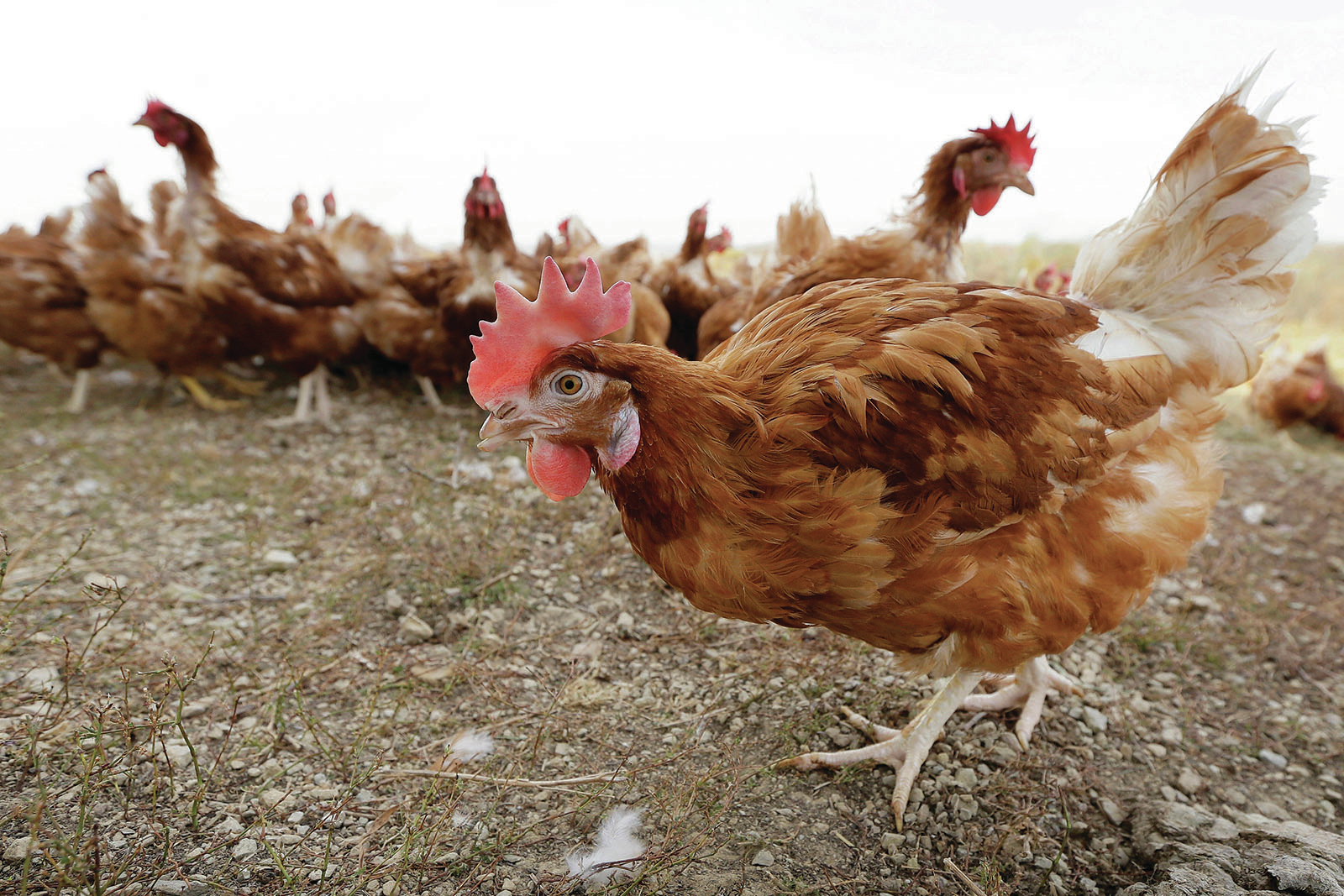 FILE - In this Oct. 21, 2015, file photo, cage-free chickens walk in a fenced pasture at an organic farm near Waukon, Iowa. The confirmation of bird flu at another Iowa egg-laying farm will force the killing of more than 5 million chickens, officials said Friday, March 18, 2022. Spread of the disease is largely blamed on the droppings or nasal discharge of infected wild birds, such as ducks and geese, which can contaminate dust and soil. (AP Photo/Charlie Neibergall, File)