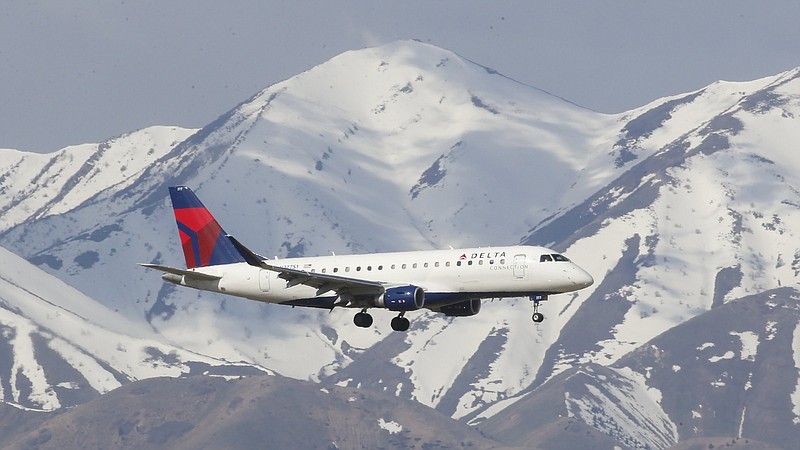 A Delta Connection jet lands at Salt Lake City International Airport in 2020. Delta is beefing up its flight schedule and staffing in preparation for a busy summer, the airline’s CEO said. (AP)

Even as he sees long-term changes to how people work and travel for business, Delta Air Lines CEO Ed Bastian says that international and business passengers are coming back strong.

Travel across the board is expected to be busy in the summer, and the carrier is taking steps to address typical summer flight challenges such as bad weather and full flights, he told reporters during a visit to Chicago. But operations still might not run as smoothly as they did before the pandemic.

"It's still going to be a challenging summer," Bastian said. "I think we're going to do a really good job, but it's not going to be like pre-pandemic."

As demand for travel has returned, airlines have been tasked with ramping up flight schedules and refilling their staffs after pandemic cuts. Passengers have encountered higher airfares, especially in recent weeks as carriers contend with fluctuating oil prices. And a looming pilot shortage could pose particular challenges for smaller, regional flights.

Delta continued to fly less during the first quarter of the year than in 2019. Its capacity was 83% of 2019 levels, the company said in its first quarter earnings report in April.

"We've tried to be much more stable and grow within our means," Bastian said this week.

Staffing is at good levels, Bastian said. The carrier has hired 15,000 people since the start of last year, and is still hiring pilots and flight attendants.

But summer thunderstorms and air traffic control challenges could mean headaches for passengers. And the airline has recently been flying very full planes, Bastian said, which means there could be little room to rebook passengers whose flights are canceled.

Delta has taken steps to try to address that challenge, including building in more crew rest and "firebreaks" that will allow it to catch up with its schedule, he said. He anticipates flight loads could stabilize next year.

Even as Delta looks to the busy summer travel season, business travel has already returned, Bastian said during a lecture at Northwestern University. The volume of business travel is more than 80% of where it was pre-pandemic, and revenue is nearing 100%.

Corporate travel was especially hard hit during the pandemic, as people were quicker to plan vacations than business trips and employers delayed reopening offices as the delta variant, then the omicron variant, of covid-19 surged.

The rise of Zoom and other technology in business will eliminate some traditional business travel, he said. But shifts in the workplace will drive other, new types of business travel.

Bastian doesn't foresee companies returning to traditional office workweek schedules soon. That means new types of business travel, such as workers living and working in different places who must travel to get to their offices, he said.

"I do think you'll see some shift of the reasons for travel," he said.

More changes are in store for O'Hare International Airport travelers flying Delta. The airline is moving from Terminal 2 to Terminal 5, as part of an $8.5 billion expansion of the airport that includes an overhauled and expanded Terminal 5 and replacement of Terminal 2 with a new global terminal.