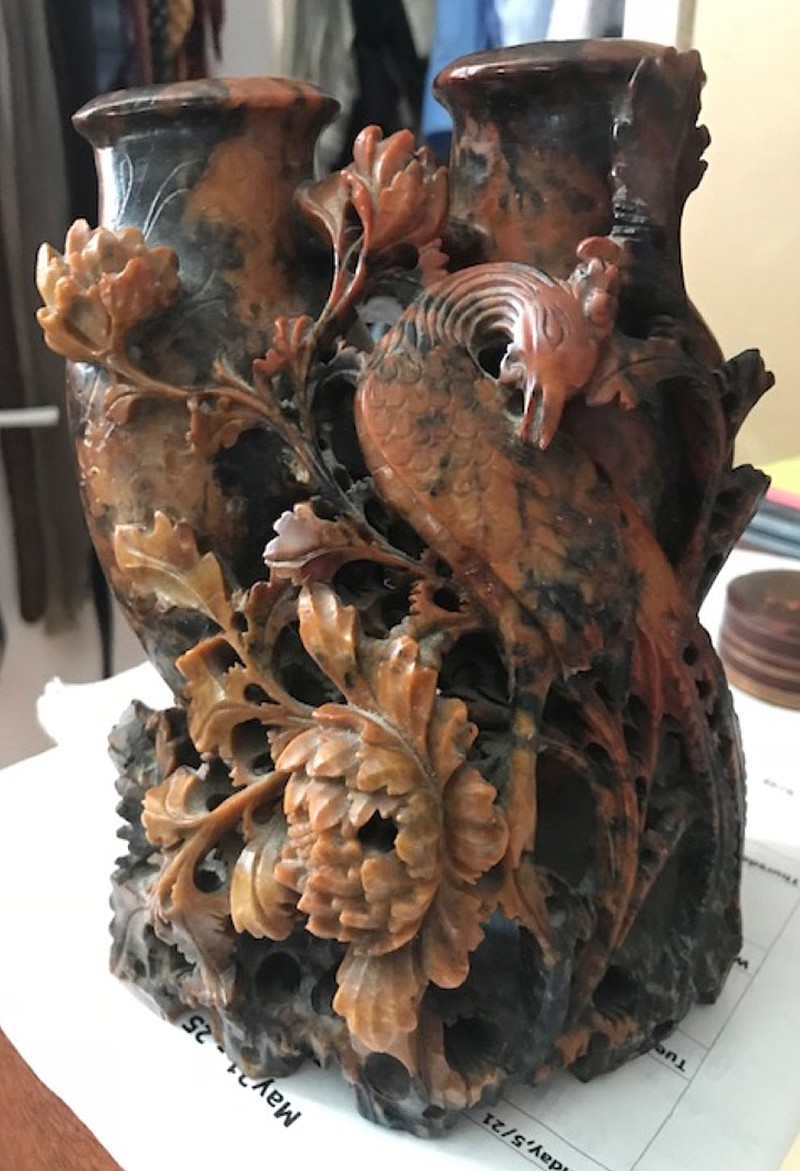 In this case, bigger would have been better. (Reader submitted/TNS)

DEAR HELAINE AND JOE: I hope you can help me identify this piece of sculpture. My mother had this piece sitting around for years and now it has been passed down to me. It is 7 inches tall and 6 inches wide. What is it called? And does it have any value?

But we were a little nonplussed by the term "sculpture." We have never thought about pieces of this sort being designated this way. We tend to call such pieces "carvings," but we suppose that since it's a three-dimensional depiction of a bird among foliage, "sculpture" is not entirely out of the ballpark.

When we first saw the photos, we thought it was well carved, but our eyes did not pick up the pictorial content right away because the image was on its side. We thought it was a chrysanthemum and did not see the bird until we turned our heads and had an ah-ha moment.

This double vase is a Chinese soapstone carving, probably from the early years of the 20th century. We see some art nouveau influence in the curving, curling leaves and the naturalistic rendering of a mythical bird known as "fenghuang."

Many times the bird is referred to as a phoenix, the mythical bird that bursts into flames at the end of its life and then rises from the ashes. This is a Greek myth that should not be transferred to Chinese carvings because in this case, East does not really meet West.

The fenghuang rules over all the other birds. Originally "feng" was the male bird and "huang" was the female, but over time they merged to become one bird. The bird is also called the "ho-ho bird" or "August Rooster," and yes, the "Chinese phoenix." At one time, it was said that the feng-huang bird had the beak of a rooster, face of a swallow, neck of a snake, breast of a goose, back of a tortoise, hindquarters of a stag and the tail of a fish. Yes, one weird bird.

The fenghuang is the symbol for virtue and grace and is the union of yin and yang. The vase belonging to E.P. is made from a mottled reddish-brown soapstone or steatite that is an easily carved talc schist. The talc content varies in the stone, and the ones used by the Chinese for this type of carving were up to 80% talc, while the soapstone used today for such things as countertops is only 30% talc.

Soapstone, which was also carved by Vikings, Egyptians, Inuits, American Indians and many others, can be found in shades of pink, white, gray, brown, green, black, yellow and more. Large intricately carved pieces of Chinese soapstone (depictions of mountains, villages and the like) can bring serious money, but smaller pieces such as this one are much more common and less expensive.

The Chinese soapstone carving belonging to E.P. is better carved than most and the color of the soapstone is attractive. In our opinion it should be insured for between $200 and $300 if it is in perfect condition.