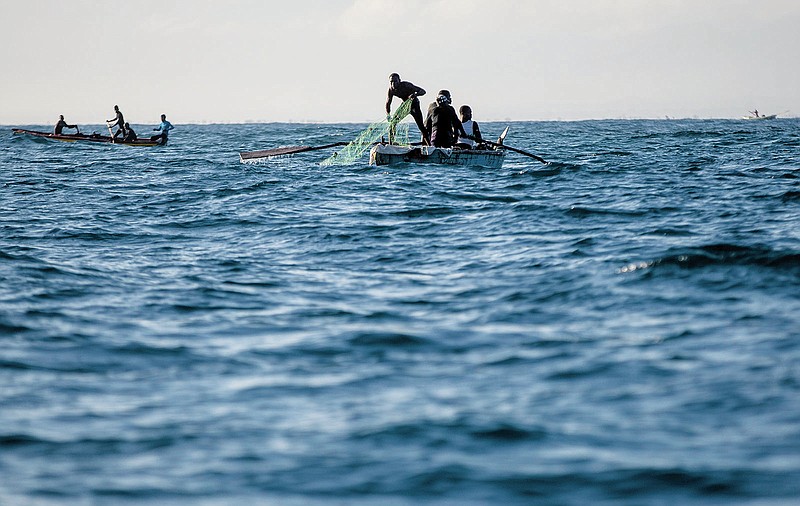 A fisherman pulls his net back onto his boat in the waters surrounding Cap-Haitien, Haiti, Friday, March 11, 2022. A prize winning marine biologist is working to bring together fishermen from Haiti and the Dominican Republic and find a solution that will not only save their livelihoods but also vital marine resources in a region under extreme pressures from climate change. (AP Photo/Odelyn Joseph)

PEPILLO SALCEDO, Dominican Republic -- In a blue bay that spans the border of Haiti and the Dominican Republic, fishermen from both countries recently aired grievances in a rare face-to-face meeting thanks to the efforts of marine biologist Jean Wiener.

The meeting, overseen by Dominican naval officers with rifles, was no small feat for Wiener, who has been forced to work on conserving this biologically sensitive region from afar -- his house in Bethesda, Md. -- because of rampant violence in Haiti, his homeland. Now the prize-winning biologist stood in the Caribbean heat at the mouth of a spot called the Massacre River, trying to bring together the two sides and find a solution that will not only save their livelihoods but also vital marine resources in a region under extreme pressures from climate change.

"The constant fishing, or overfishing, in these areas has decimated an entire ecosystem," said Rodolfo Jimenez, director of an agricultural border project in the Dominican Republic.

The Haitian fishermen, standing across from Jimenez on the beach, agreed. But they also said they were not to blame for the damage in the Monte Cristi National Park in northwestern Dominican Republic.

Wiener's work has grown in significance over the years in large part because of charcoal vendors in Haiti who hack down trees for cooking fuel and, more recently, wade into the country's mangroves, the tropical vegetation that is a natural barrier against the Caribbean's destructive hurricanes.

It was the first trip for Wiener, leader of the Foundation for the Protection of Marine Biodiversity, since November 2021, his absence largely attributed to the violent gangs that have engulfed the Haitian capital in recent years. Nominally present already and undermined further with the 2021 assassination of President Jovenel Moise, the government has done little to wrest control from the gangs.

For years, Wiener used to visit Haiti every month or so, but now restricts his trips to only a few times a year while being compelled to work remotely and delegate more responsibility to staff members dispersed throughout the country. Haiti is just too dangerous otherwise. So when he does come, as he did for three weeks in March, he hopscotches the country via puddle-jumper plane; travel by road is too perilous.

It's a conundrum that bedevils Jean and others like him around the world. As climate change plays a greater role in contributing to conflicts, that in turn makes it more difficult to carry out scientific research and work on environmental projects that seek to offset the effects of climate change. The environmental group Global Witness released a report last year noting that 2020 saw a record number of environmental activists killed around the world; the death toll of 227 was the highest number recorded for a second consecutive year, with Colombia having the highest number of recorded attacks, with 65, and Mexico second, with 30.

"The extent to which failed states make it difficult for scientists and the international scientific community to work on these issues simply means it will be more difficult to solve these problems," said Peter Gleick, president emeritus and a senior fellow with the Pacific Institute, an Oakland-based research group that focuses on water issues.

In several reports released in October, the U.S. signaled that climate change would occupy a central role in security strategy, a policy shift that underscores how climatic changes are exacerbating long-standing problems. One of the studies identified 11 countries that were of "greatest concern," because they were especially vulnerable to climate change and unable to deal with the attendant problems. Haiti was among them.

The kidnappings have persisted for years, rising significantly after the 2017 departure of a U.N. peacekeeping mission. In October, a group of missionaries was abducted by a powerful gang and held for ransom.

The March meeting took place at the mouth of a river with a name that hearkens back to a bloody episode on the island of Hispaniola: The Massacre River, also the Dajabon River. Though named for an earlier massacre, it's mostly known for when Dominican soldiers in 1937 executed thousands of Haitian families and Dominicans of Haitian descent.

The antipathy toward Haitians persists today, not least with Dominican President Luis Abinader's newly launched plan to build a multimillion-dollar, 118-mile wall along the border.

In the end, the March trip to Haiti proved fortuitously uneventful--though danger wasn't far away.

When Wiener visited the southwestern part of the country, his driver got wind of protesters' plans to storm the local airport. The attack didn't happen until after Wiener flew out, a few days later: People ran onto the tarmac and torched a small plane.

One day during his recent visit to northern Haiti, Wiener gave a snorkeling lesson. While wading in the surf, a pufferfish floated toward the group.

Wiener gently picked up the prickly fish with both hands, walked a few steps out and sent the pufferfish into the ocean.

"We really know that there's a part, you know, where you can be in a classroom," Wiener said later from the hotel, where a few security guards patrolled the grounds. "But it is critically important that people actually get out and touch and see and feel the environment." 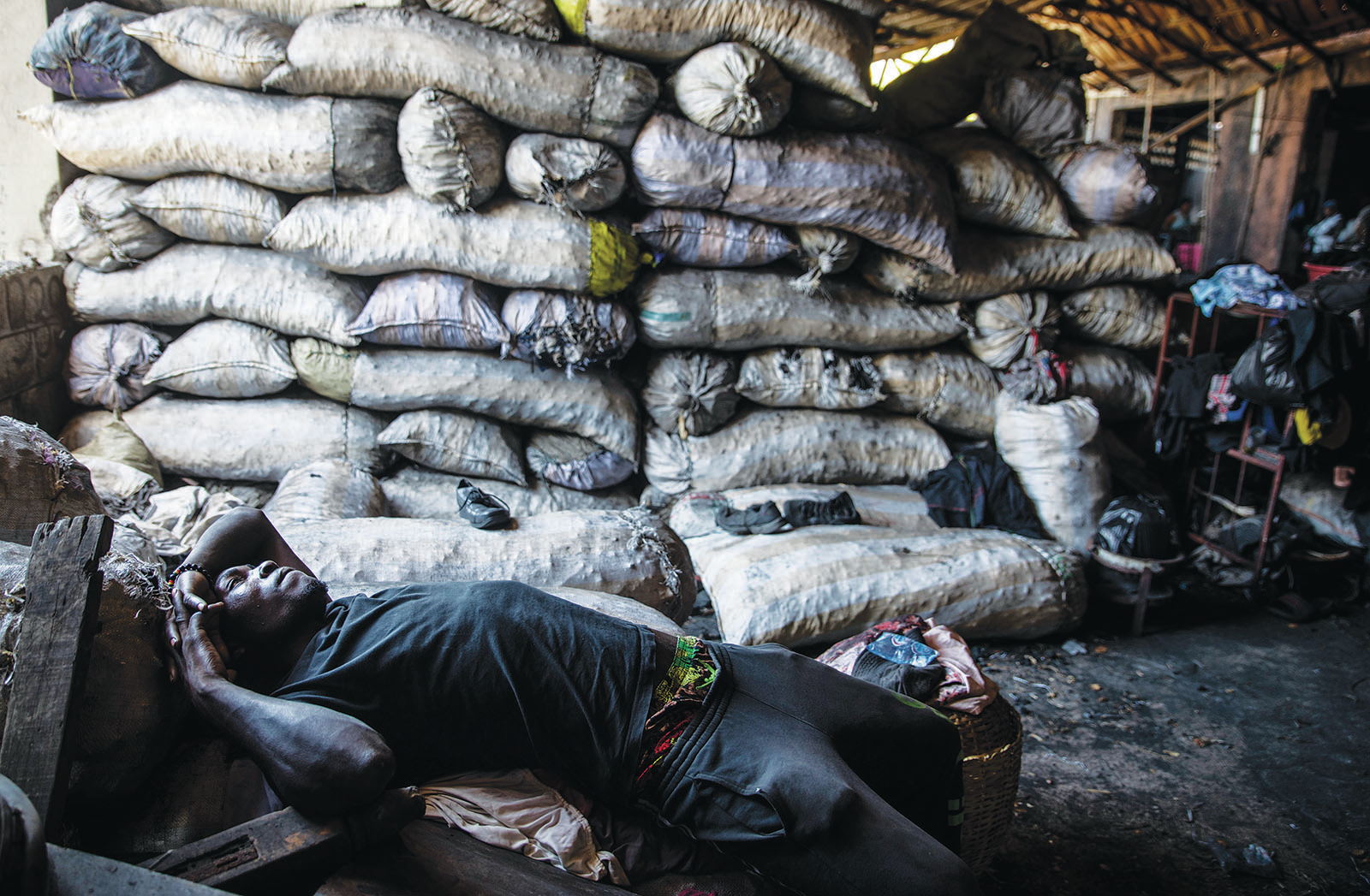 A worker rests at a charcoal market in Port-au-Prince, Haiti, Monday, March 14, 2022. Even though propane can be a bit cheaper, nobody sees imported gas or other energy sources replacing charcoal anytime soon in Haiti because of cooking traditions and practical realities. (AP Photo/Odelyn Joseph) 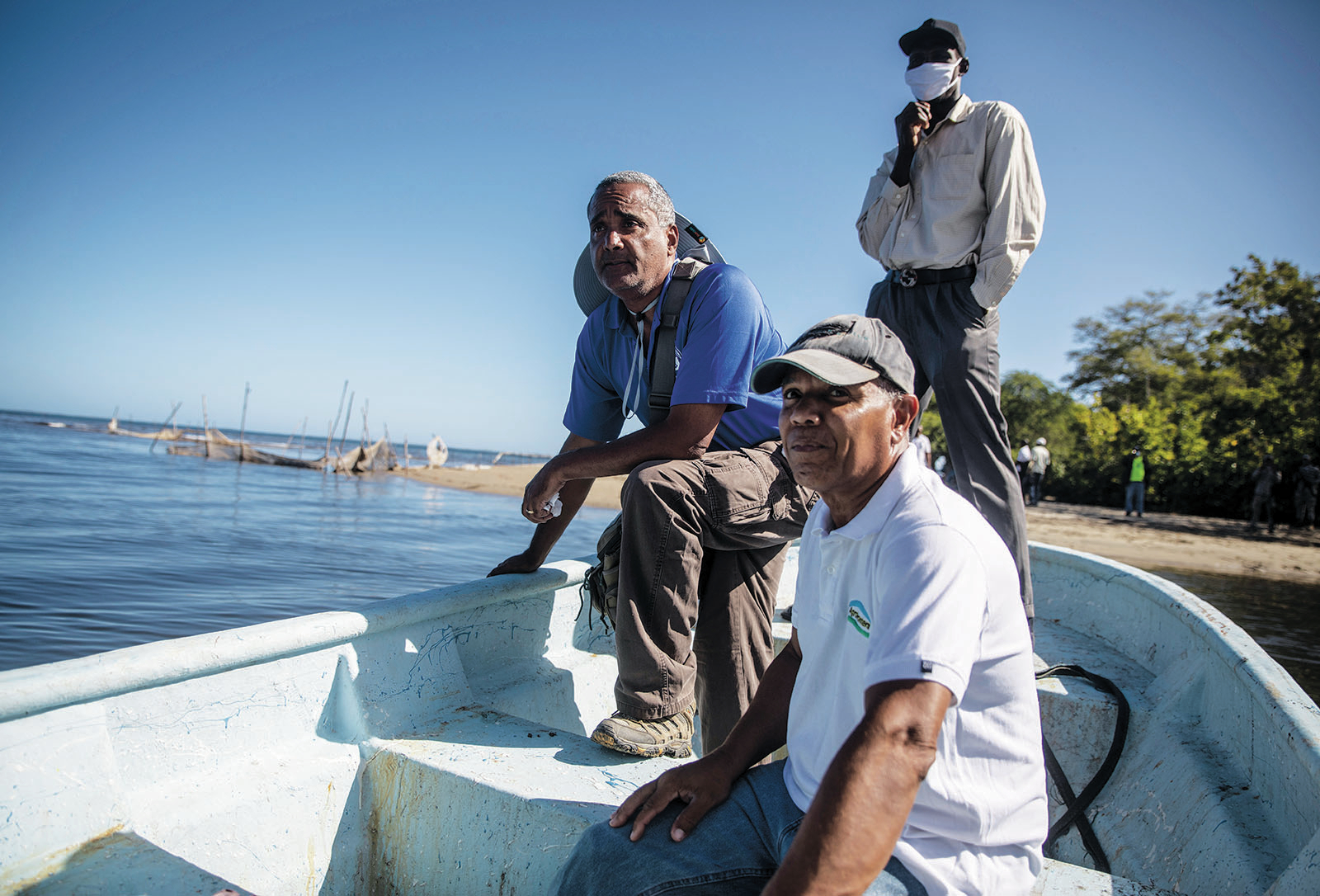 Agronomist and horticulturalist Frederick Payton, right, and marine biologist Jean Wiener, left center, cross the Massacre River in order to attend a rare face-to-face meeting between fishermen from Haiti and the Dominican Republic, in Fort-Liberte, Haiti, Thursday, March 10, 2022. It was the first trip for Wiener, leader of Foundation for the Protection of Marine Biodiversity, since November 2021, his absence largely attributed to the violent gangs that have engulfed the Haitian capital in recent years and reached parts of the countryside. (AP Photo/Odelyn Joseph) 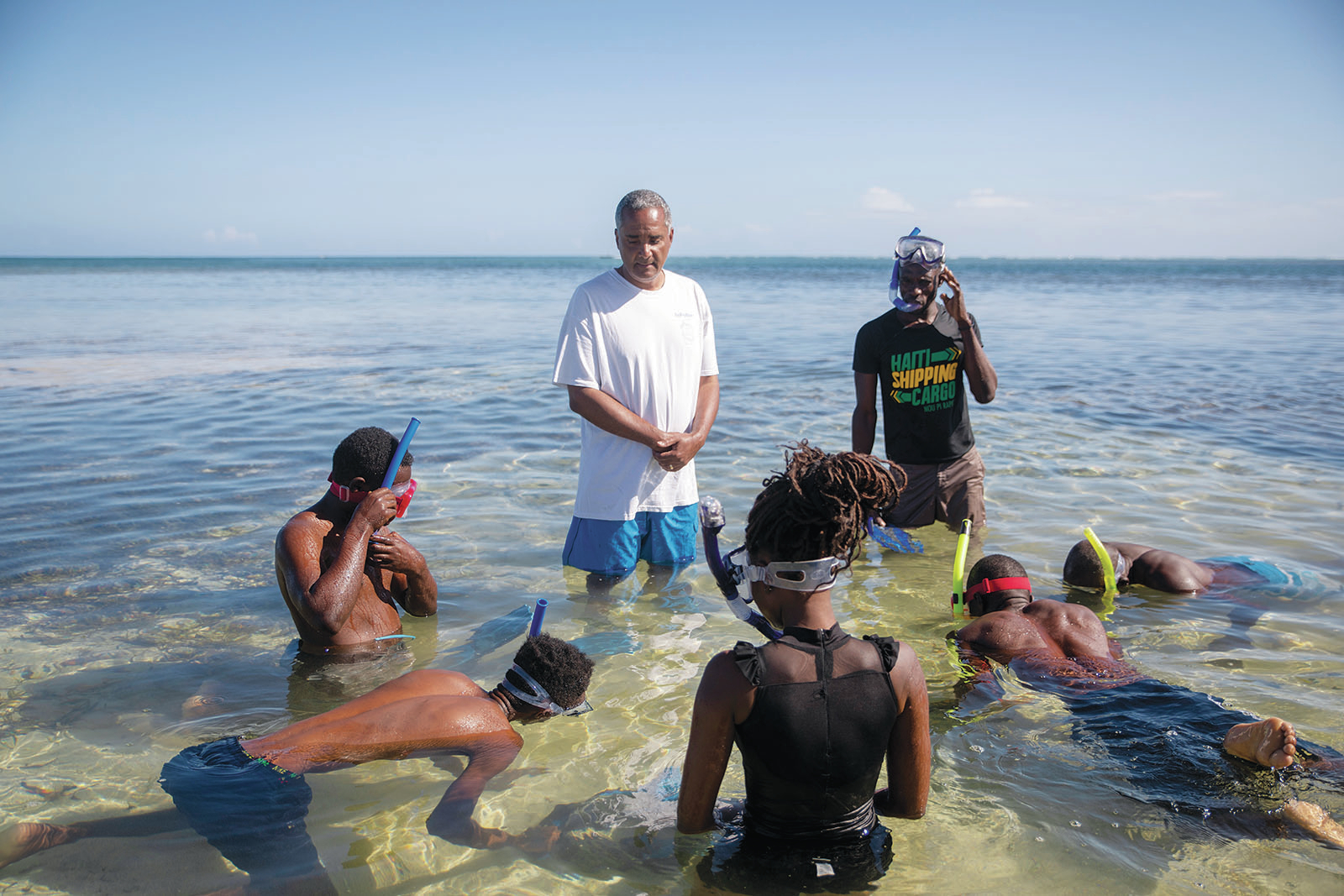 Marine biologist Jean Wiener teaches the basics of snorkeling in Caracol Bay near Cap Haitien, Haiti, Wednesday, March 9, 2022. Wiener brought to the beach a group that included game wardens and university students with an interest in the environment. The idea was to get them in the water, make them feel comfortable and learn the basics of snorkeling. (AP Photo/Odelyn Joseph) 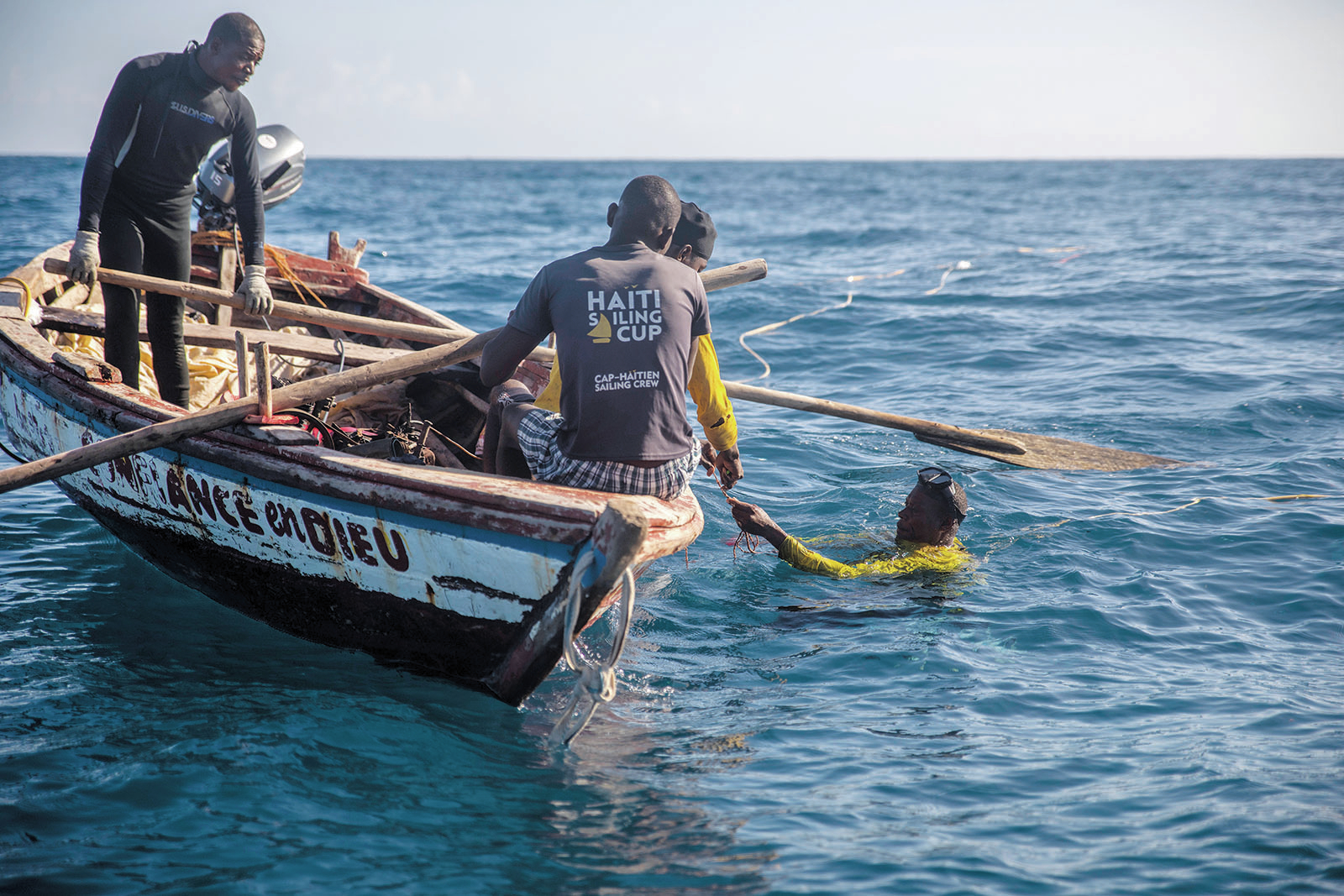 Fishermen prepare to fish in the waters of Cap-Haitien, Haiti, Friday, March 11, 2022. A day before, a meeting between Haitian and Dominican fishermen where they could air their grievances came the idea of creating a boat registration and a licensing for fisheries so Haitian and Dominican authorities know who is in the water and where they’re going. (AP Photo/Odelyn Joseph) 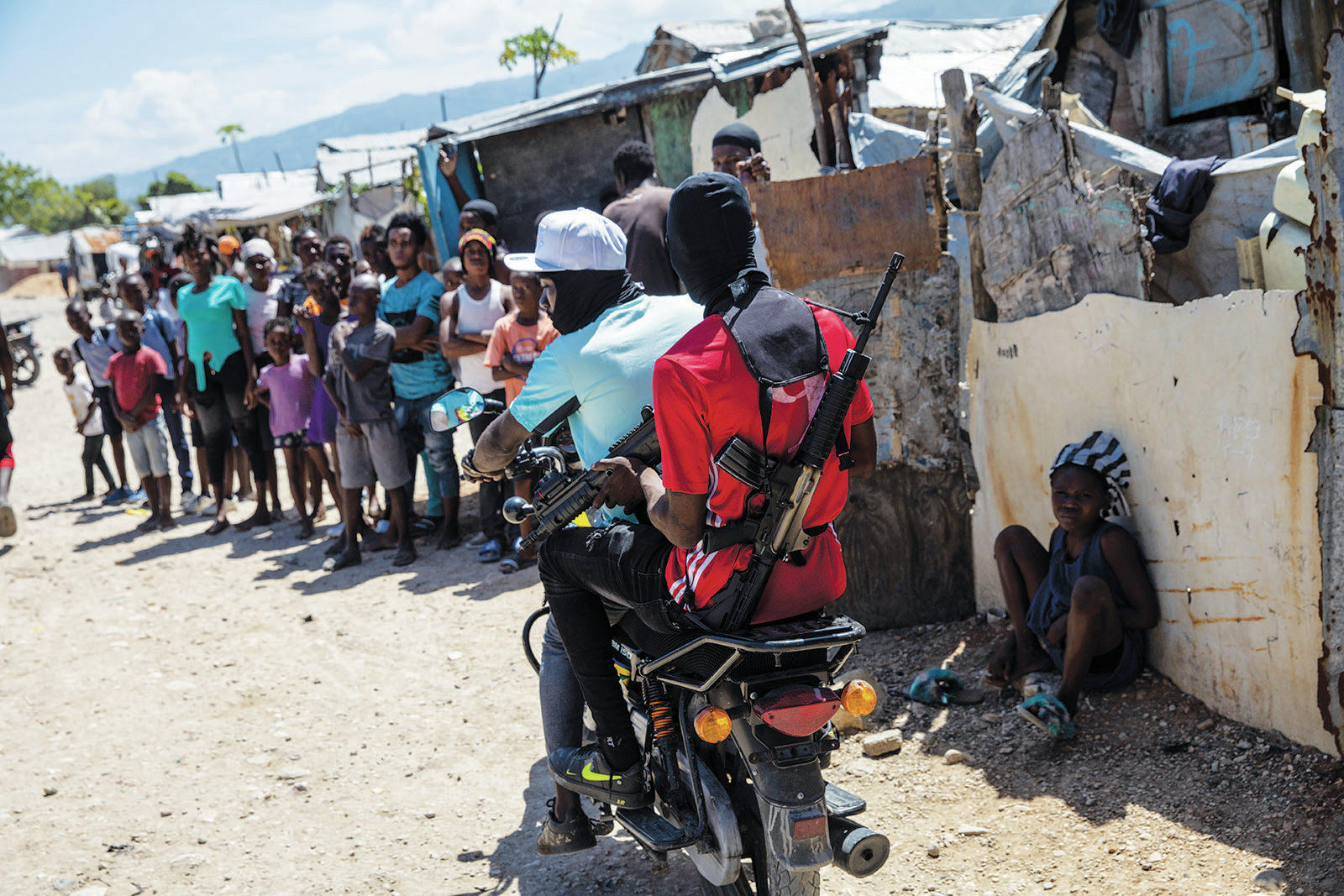 FILE - G9 coalition gang members ride a motorcycle through the Wharf Jeremy street market in Port-au-Prince, Haiti, Oct. 6, 2021. While some gangs have turned to kidnapping, like those who captured 17 missionaries and their relatives, Jimmy Cherizier, aka Barbecue, a former policeman who leads the G9 gang coalition, has taken control of the port district, gaining a stranglehold on the country's economy. (AP Photo/Rodrigo Abd, File) 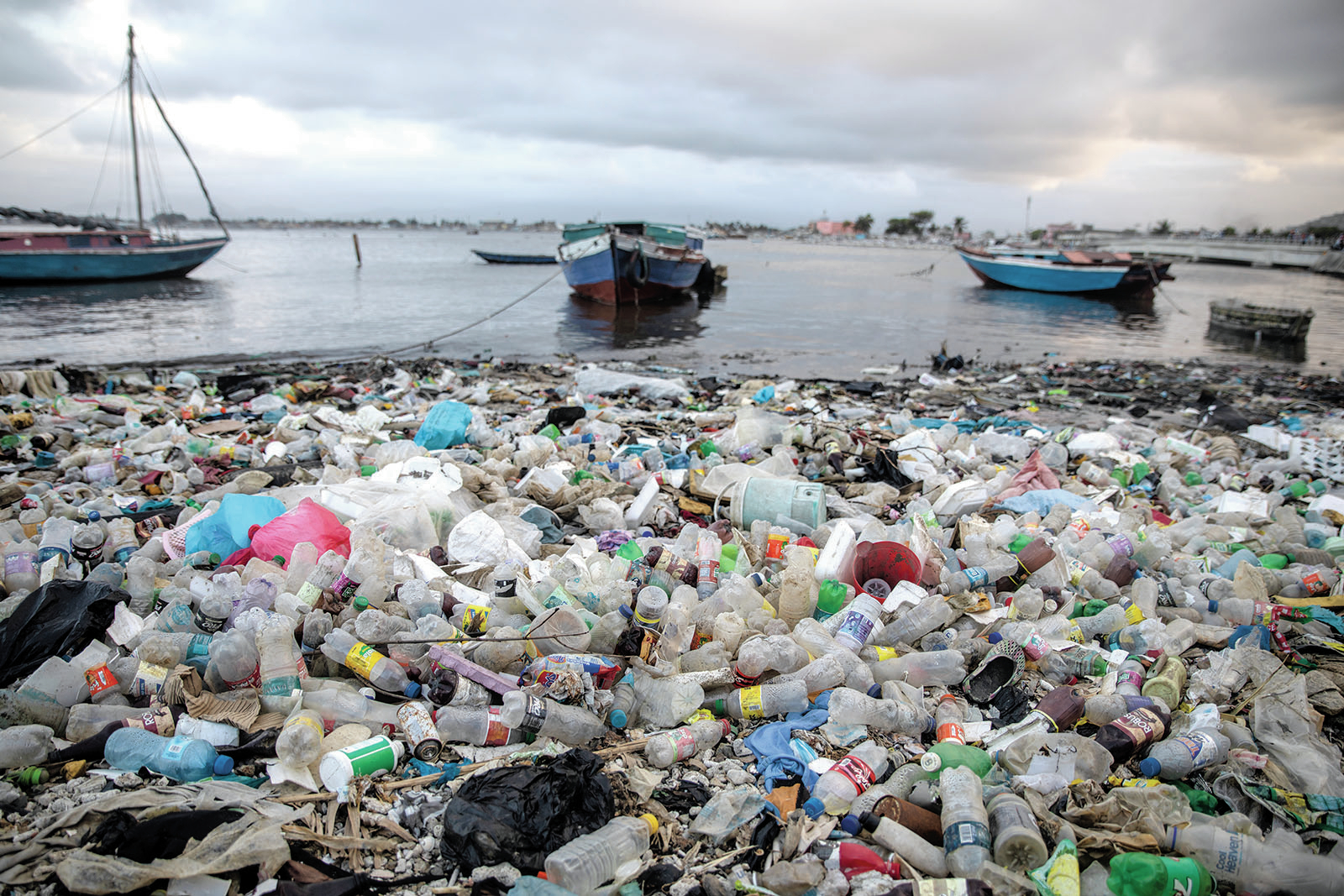 Litter and debris blanket the shoreline in Cap-Haitien, Haiti, Thursday, March 10, 2022. In several reports released in October, the U.S. signaled that climate change would occupy a central role in security strategy, a shift in strategy that underscores how climatic changes are exacerbating long-standing problems. One of the studies identified Haiti as one of 11 countries that were of “greatest concern.” (AP Photo/Odelyn Joseph) 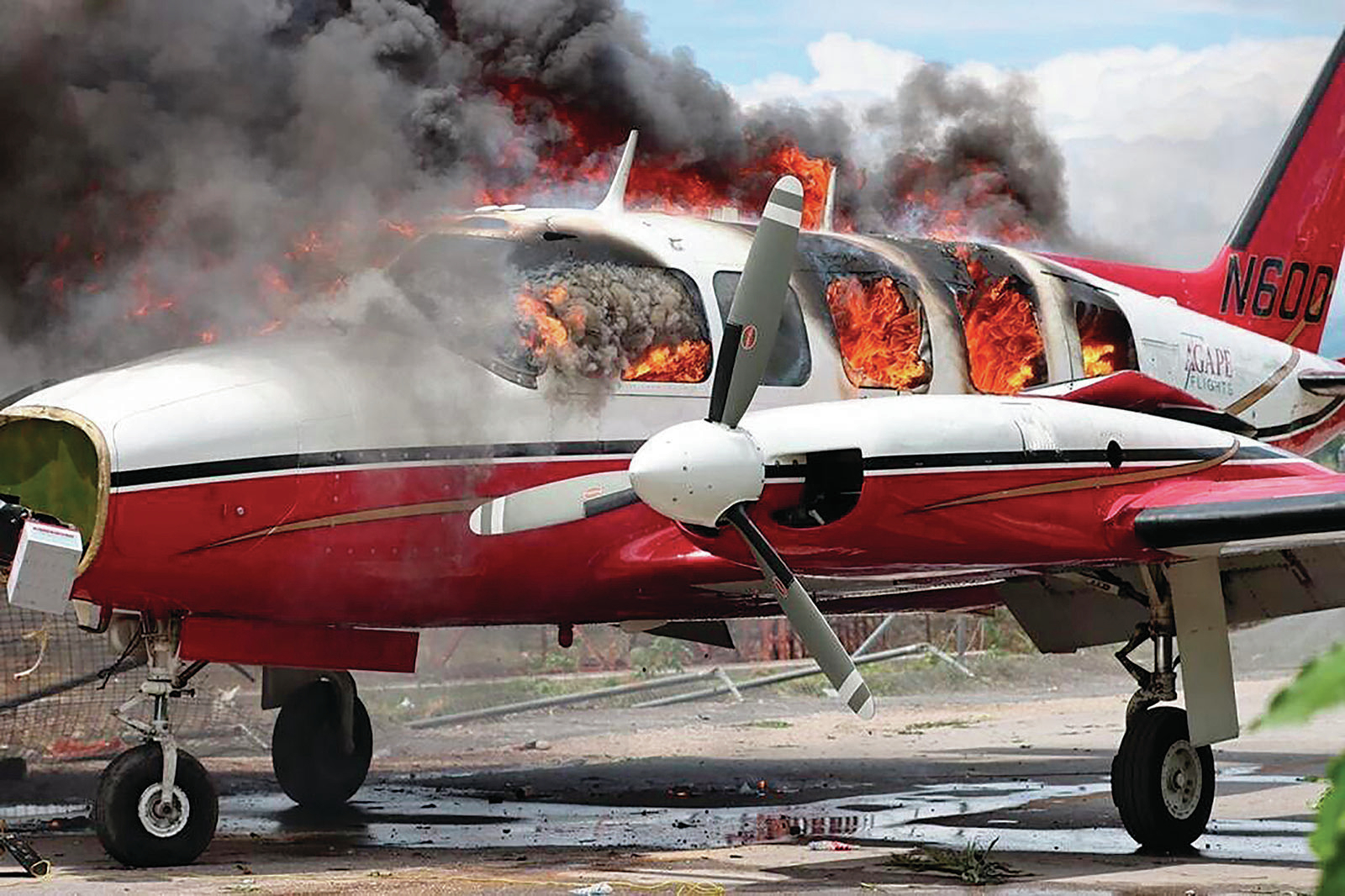 FILE - A plane burns after being set on fire by demonstrators protesting increasing violence, at the airport in Les Cayes, Haiti, March 29, 2022. People ran onto the tarmac and torched a small plane owned by a U.S. missionary group. One person died and five others were injured, including four police officers, according to a police official working at the airport. (AP Photo/John Cadafy Noel, File) 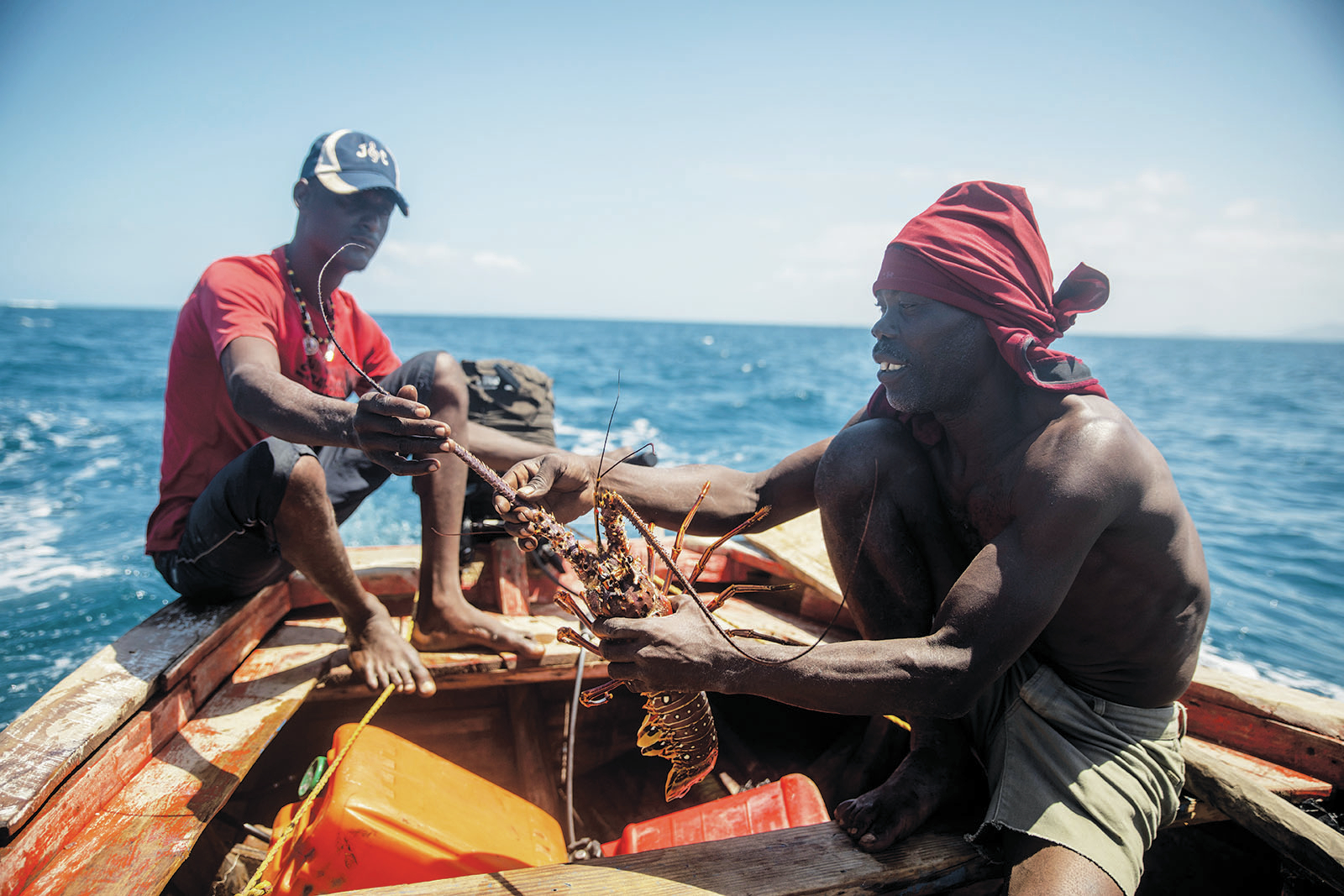 Fishermen hold a lobster caught after a day's work, in Cap-Haitien, Haiti, Friday, March 11, 2022. A day earlier, in a nearby bay that spans the border of Haiti and the Dominican Republic, fishermen from both countries recently aired grievances in a rare face-to-face meeting. (AP Photo/Odelyn Joseph) 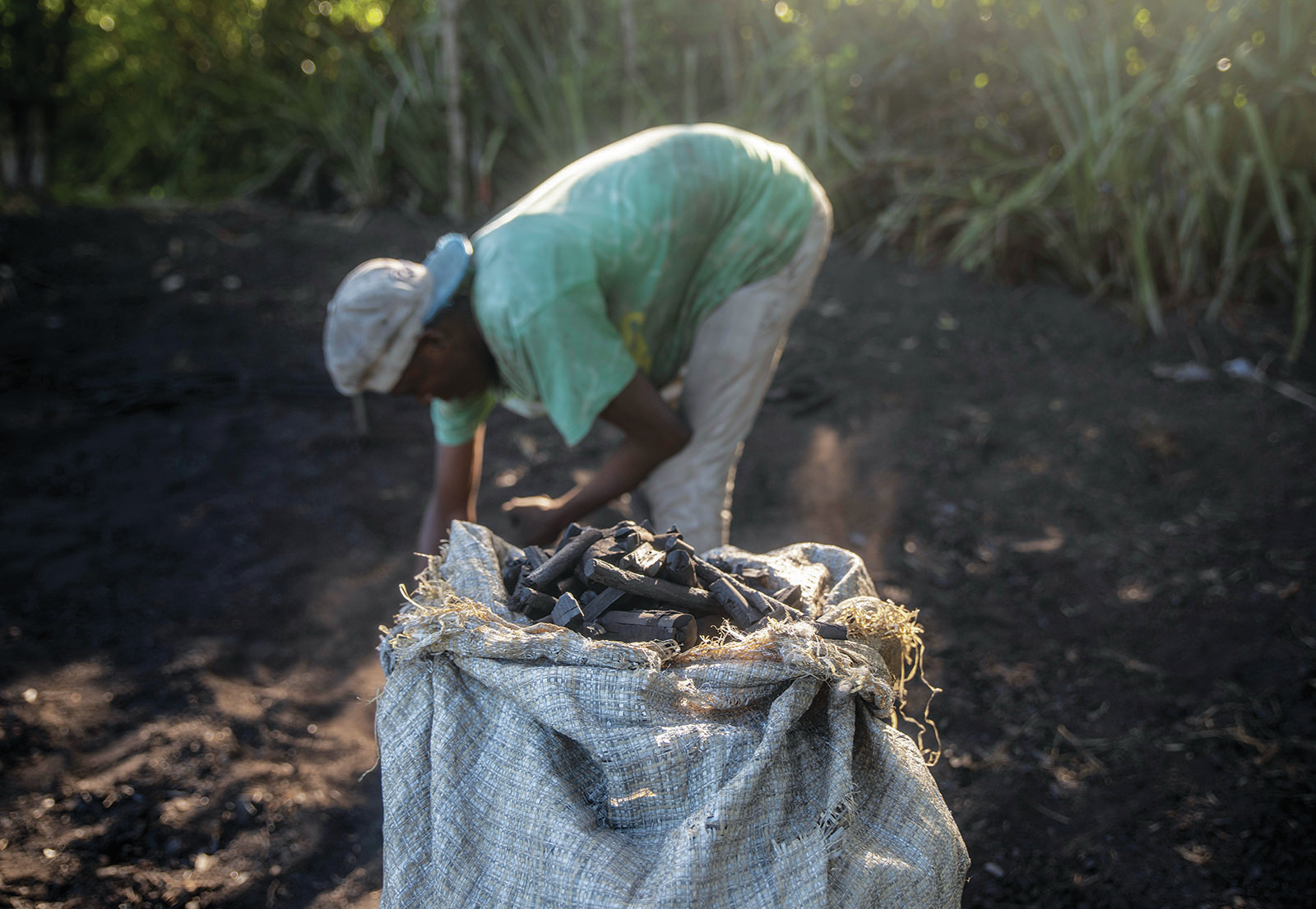 Lindor St-Ville fills a bag with charcoal to sell at market, in Trou-du-Nord, Haiti, Saturday, March 12, 2022. While rural families burn firewood to cook their own meals, they will produce charcoal for sale to pay school fees and other expenses. (AP Photo/Odelyn Joseph)