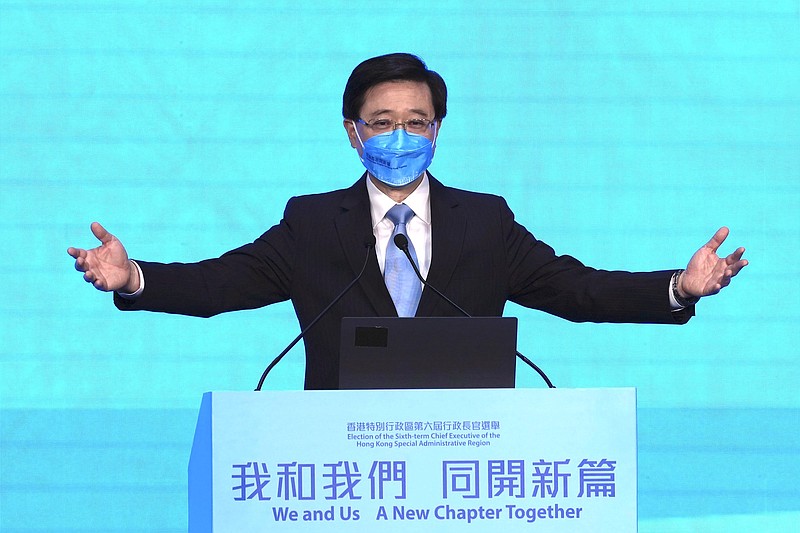 John Lee, former No. 2 official in Hong Kong, and the only candidate for the city's top job, attends his 2022 chief executive electoral campaign rally in Hong Kong on Friday. (AP/Kin Cheung)

HONG KONG -- China is installing a career security official as the new leader of Hong Kong to replace Carrie Lam on July 1.

John Lee, formerly the city's No. 2 official, is the only candidate today in what is an election in name only.

Over half of the 1,500-member Election Committee that selects the chief executive has already endorsed him and he needs only a simple majority to win.

Speaking to supporters Friday, Lee acknowledged that Hong Kong has deep-rooted problems and reiterated his intention to bring a "results-oriented" approach.

"Hong Kong has to seize its opportunity. We can not afford to wait. We can not be late," the 64-year-old former police officer said. "We will have to consolidate Hong Kong as an international city, to develop Hong Kong's potential as a free and open society, to connect the mainland of China and the world."

Though they will vote in a secret ballot, Hong Kong's electors have all been carefully vetted.

A push to elect the leader by popular vote foundered in 2014 amid protests demanding Beijing also relinquish the right to approve candidates.

The intensity of the 2019 protests prompted the imposition of the National Security Law the following year and the reorganization of the legislature to put pro-Beijing forces firmly in charge in 2021.

Following passage of the law in 2020, the United States sanctioned Lee, Lam and other Hong Kong and mainland Chinese government officials, for "undermining Hong Kong's autonomy and restricting the freedom of expression or assembly."

More than 150 activists and others have been arrested since its implementation.

As security secretary, he led the campaign to confront protesters with tear gas and rubber bullets, then rounded many of them up for arrest later.