Recycle Bikes for Kids rolls on with fundraiser 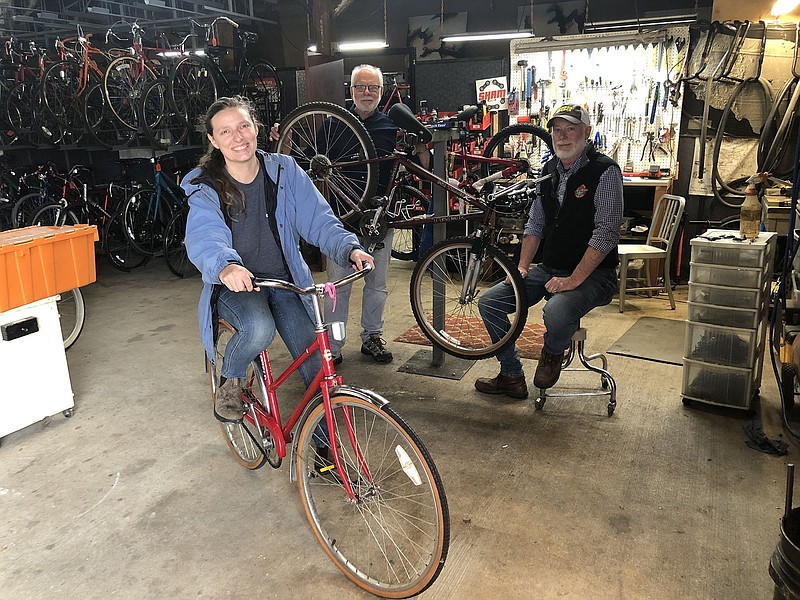 Recycle Bikes for Kids has bicycles for riders of all kinds. Meg Gholson, program manager of the North Little Rock-based nonprofit, is on a vintage city bike as founder Ron King (left) and board member Charlie Hart put down their tools for a few minutes after working on donated bikes on a recent afternoon. (Arkansas Democrat-Gazette/Sean Clancy)

There is a place in North Little Rock where old bicycles are given new life.

Recycle Bikes for Kids, a rehab center for pedal-powered conveyances, can be found in a sprawling, 7,000 square-foot warehouse at 717 E. 10th St. The nonprofit was started 14 years ago by Ron King in an effort to get used, refurbished bicycles to kids who might not otherwise have one to ride. His original plan was to round up 100 old bikes to repair and give to children at Christmas. He ended up with about 400.

The bikes never stopped rolling in, and last year Recycle Bikes for Kids gave away its 20,000th bicycle. There are plenty more where those came from.

King, who retired from his business -- Refurbished Office Panels -- three years ago, is still a little in awe of Recycle Bikes' growth and impact, and says he may have been too overwhelmed early on if he'd known how big it would become.

"I honestly believe that God eased me into it, and it has grown at a pace that I could stand," he says.

On May 15, cyclists will participate in the Recycle Bikes for Kids Dirty Fondo, a fully supported gravel ride with distances of 40, 32 and 26 miles that starts at 103 Bransford Road, nine miles south of Lonoke. The event is one of the biggest fundraisers of the year for Recycle Bikes, with more than 100 riders expected, food trucks and a party at the finish.

Another popular fundraising ride, the Wampoo Roadeo, presented by Aristotle Broadband, starts at 7 a.m. July 16 at Scott. Riders doing the Wampoo, which offers distances of 62, 40 and 27 miles, can also donate to help with infrastructure projects on the Arkansas River Trail and surrounding areas. Recycle Bikes has added work on the infrastructure, which was previously done through the Marilyn Fulper Memorial Fund and includes water fountains and tool stations, to its mission statement.

It's a Monday afternoon in April and Meg Gholson, Recycle Bikes' program manager, is showing us around the warehouse. There are more than 1,000 bikes in all shapes and sizes in various states of repair along with a seemingly endless array of neatly arranged bicycle parts and tools. There are 10 workstations where volunteers wrench on ailing bikes, and there's even a section for cycling kits like helmets, jerseys, gloves and other gear for sale.

The nonprofit, which recently received a $16,000 grant from the Walton Foundation to buy cycling helmets, moved here five years ago from its original space in a building King owned on East Sixth Street in Little Rock.

Gholson has been with Recycle Bikes for about four years, and is its lone full-time employee. As program director, she does a little bit of everything, from working on bikes to writing grants, planning events, directing social media, coordinating volunteers, managing recyclebikesforkids.org and more.

She may spend one day checking on a trailer full of bikes that will be given away in Pine Bluff, the next she may be applying for a federal grant. She recently worked with a program called Safe Routes to School at Boone Park Elementary, where she gave away bikes and helmets to students and taught them basic riding and mechanic skills.

"Every day is different," she says.

Working at Recycle Bikes is "a way to be a direct impact in my community," she says. "I've worked with other nonprofits, and that was great, but I could never really see the direct impact of my work. Working here has allowed me to see how big of a difference bikes can make in a community and families' lives."

Gholson has witnessed how a bicycle can be a child's first taste of independence.

"Seeing a kid that has never had a bike get one of their own, there's nothing quite like that. Their eyes light up, and you can see the possibilities running through their head of what they can do and where they can go."

Recycle Bikes gives bikes to anyone under 16. The earn-a-bike program allows those 16 and older to volunteer for a minimum of three hours to get a free bicycle.

"That could include cleaning up, working on bikes, helping organize, cutting up T-shirts to use as shop rags," Gholson says. "There are all kinds of tasks that go into keeping us running."

King is installing a fork on a child's bike. Next to him, board member and volunteer Charlie Hart adds new cables to an old Trek mountain bike.

King got the idea to distribute bikes to kids after seeing a story in 2007 about a similar project sponsored by the Fraternal Order of Police. He'd been doing missionary work in South America and other places and wanted to find a way to help out closer to home.

"I knew how important a bike was to me as a kid, and I thought that this was something I could do," he says.

"They wanted $35, and I gave them that. One bike in, and I was already over budget," he says with a laugh.

The 20,000th bike was given away last year as part of a 10-bike Christmas donation program sponsored by the Helena-West Helena Police Department.

About four years ago, avid cyclist Hart broke his arm in a road bike wreck. With time off from riding, he started hanging around Recycle Bikes and ended up on the board of directors.

He admits to not being a particularly adept mechanic at first, but got the hang of it with the help of a book published by Park Tool, a cycling tool maker.

"You can't break a bike here because they're already broken," he says. "You might as well jump in and give it a try."

Hart is the founder the Wampoo Roadeo, and sold it to Recycle Bikes for $34 -- the number was just random. It's now a nonprofit event, he says.

Recycle Bikes depends on donations -- of bikes and money -- and help from volunteers. A group of volunteers spends Tuesdays working on bikes at the warehouse, Gholson says, and from 5-8 p.m. on the third Wednesday of each month the space is open for volunteers to spin wrenches and maybe munch on pizza during Wrench Wednesday.

"We're just trying to connect with people, particularly now that the pandemic has lessened," King says. "We're trying to get more volunteers in here. For people who work during the day, this is a way they can stop by after work and spend a little time with us. And we like having volunteer or school groups come in. All they have to do is coordinate it through Meg." 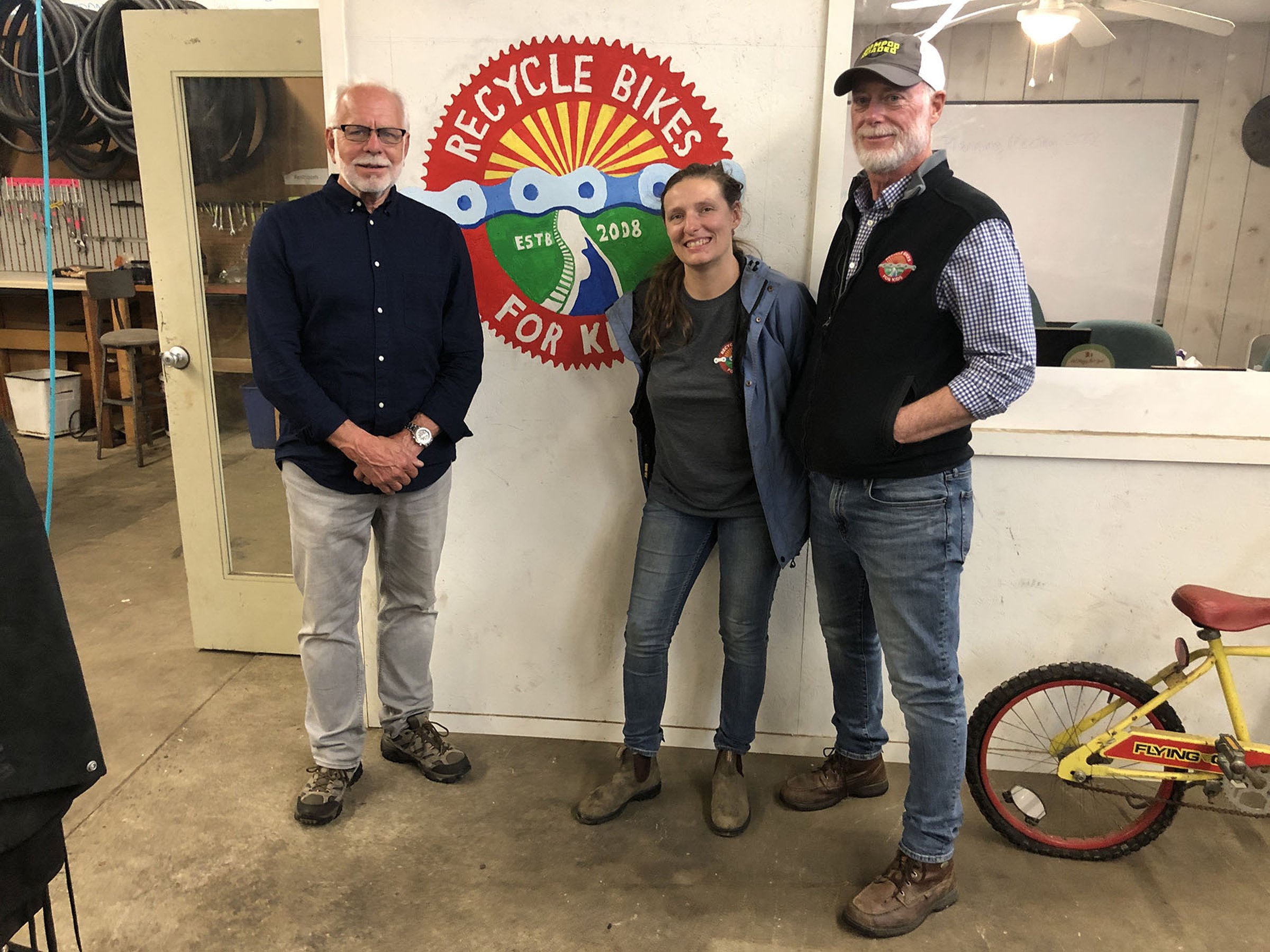 Print Headline: Recycle Bikes for Kids rolls on with fundraiser