She could throw a football — and he liked that 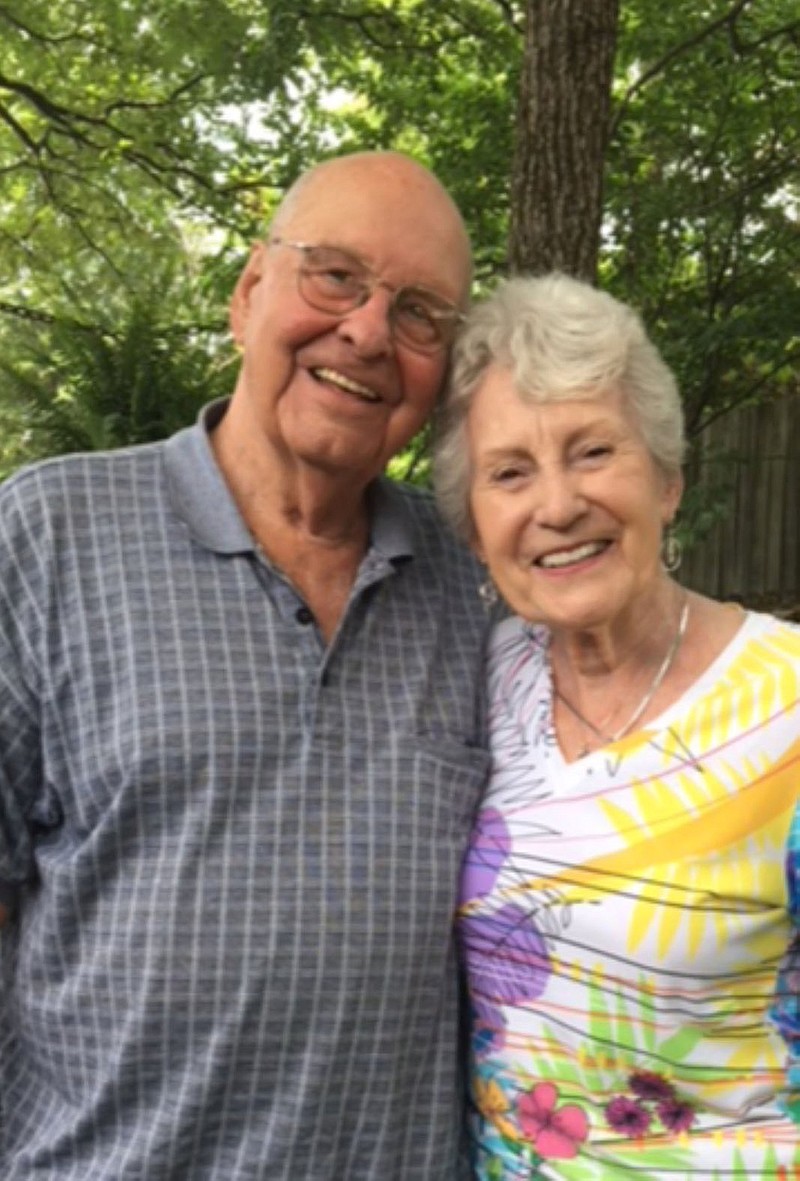 Harlan Weber and Nancy Hunter met when she joined him and his friends in tossing the football around in front of his dorm at Arkansas State Teachers College in Conway. Their first date was a simple dinner. “We were so poor we shared a burger and a Coke,” Harlan says. (Special to the Democrat-Gazette)

Nancy Hunter made a pass to Harlan Weber in 1953, and he was only too happy to receive it.

Harlan and some of his friends were throwing a football on the lawn in front of their dormitory at then-Arkansas State Teachers College in Conway when Nancy showed up on the scene.

"When I was in high school the girls just played one real football game, and so I had learned to pass," Nancy says. "I just went out there and started passing the football."

Harlan, who had started college on a football scholarship, was impressed by her form.

"I was extremely impressed, actually. She could really throw a football," he says.

Nancy spotted Harlan instantly among the 10 or 12 guys out there.

"He was a hunk," says Nancy, from Fort Smith.

She was a cheerleader and saw Harlan's place on the football team as a plus.

Harlan was just 16 when he arrived on campus after growing up in Russell and graduating from high school in nearby Bald Knob.

They were both dating casually and they ran in roughly the same circles.

Those relationships weren't serious in the first place but when they ended, Harlan and Nancy started seeing each other.

"It just kind of clicked with us," Nancy says.

There wasn't a formal proposal so much as an agreement that they should get engaged.

"I think maybe I said we should get married, and that was probably it," Harlan says.

"We married at First Presbyterian Church in Conway after selling Harlan's books and my hairdryer for $35," says Nancy, who had just completed her sophomore year. "His Phi Sig brothers took up a collection at our wedding."

Nancy hadn't met Harlan's family yet -- they were living in Ohio then -- but Harlan's mother had to write a letter giving her consent for them to marry because he was under 21.

Nancy's parents drove to Conway from Fort Smith and picked her up.

"Then we went over to the boys' dorm, and they said, 'Well, you can't go in there. What are you going to do?'" Nancy says. "I could whistle really, really loud, so I just stuck my head out the window and whistled, and I could hear the boys in the dorm yelling, 'She's here! Your bride's here!'"

One of Nancy and Harlan's friends played a wedding march on the organ, and another friend took them to Bald Knob for a short honeymoon.

"We spent the night in that guy's folks' motel and they didn't charge us anything," Nancy says.

Nancy and Harlan spent that summer in Ohio, working and saving money for school.

"We lived in a two-bedroom apartment with his mother and father and his brother and sister," Nancy says.

In the fall they returned to Conway for Harlan's senior year at ASTC (now the University of Central Arkansas).

"Harlan sold sandwiches and took up and delivered cleaning and I worked in the ... library -- 10 cents an hour -- to make our spending money," Nancy says.

They didn't get a car until after Harlan graduated with a degree in math and started working for the Arkansas State Highway Department in Little Rock.

"Harlan was so excited he tore the top off a pack of cigarettes and threw the entire pack out the window as we drove out of the car dealership," Nancy says.

At age 30, Harlan decided to go to law school. He and Nancy both worked full time while he went to classes at night. He was later appointed circuit court judge by then-Gov. Bill Clinton and retired as a Social Security Disability Judge. Nancy retired as director of Shepherd Center, which is now LifeQuest of Arkansas.

She enjoyed every minute of a trip to Greece they took together years ago.

"Harlan told me he didn't want to go back to Europe, but he said, 'You can go,'" she says. She traveled with friends after that, to Hawaii as well as to various European destinations.

Harlan's preferred pastime is watching horse races, and they have owned Thoroughbred race horses over the years.

"We also had a place on Lake Hamilton," Nancy says. "We went there almost every weekend and Harlan taught all the kids how to ski."

Nancy and Harlan have two children -- a daughter, Vicki, who lives in Little Rock, and a son, Blake, who was a dentist in Little Rock for almost 30 years before moving to Denver recently to practice dentistry with his son.

They are also "DeeDee and Hardad" to their five grandchildren and three great-grandchildren.

Most of the time, they say, they don't feel like 68 years have passed since they exchanged their vows. "Some days, it's not been easy. But we've made it through and we're very grateful," Nancy says. "We've just had a really, really joyous life," she says. "Life has been good."

He says: “She was throwing a football.”

She says: “Realize you’re going to have different interests. Let the other person have their interests.” 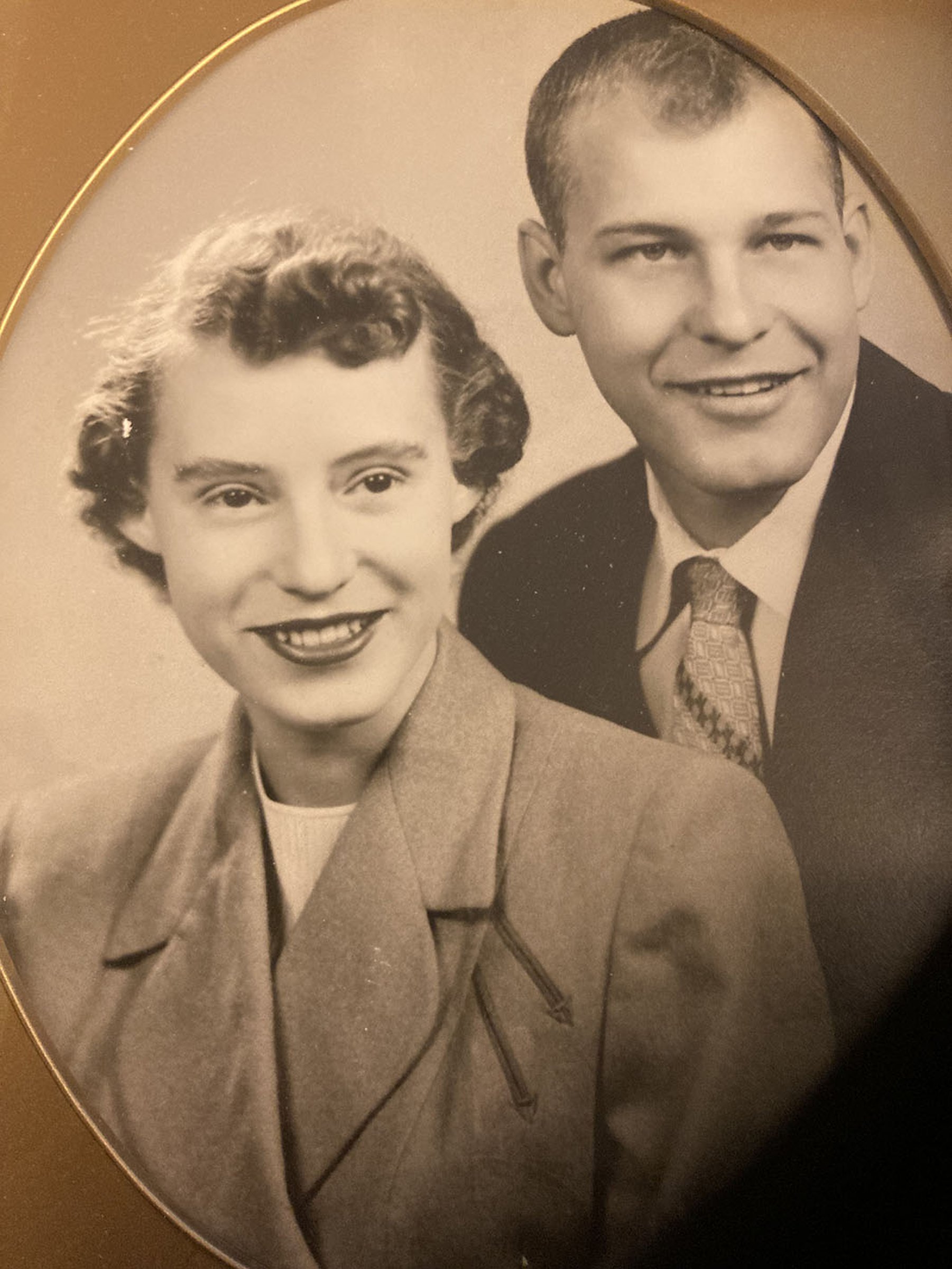 Nancy Hunter and Harlan Weber were married on May 27, 1954. They will celebrate their anniversary with family, most of whom will travel from out of state to visit. “It’s not a party,” Nancy says. “We don’t do a lot of parties but we do enjoy it when the family comes.” (Special to the Democrat-Gazette)

Print Headline: She could throw a football — and he liked that