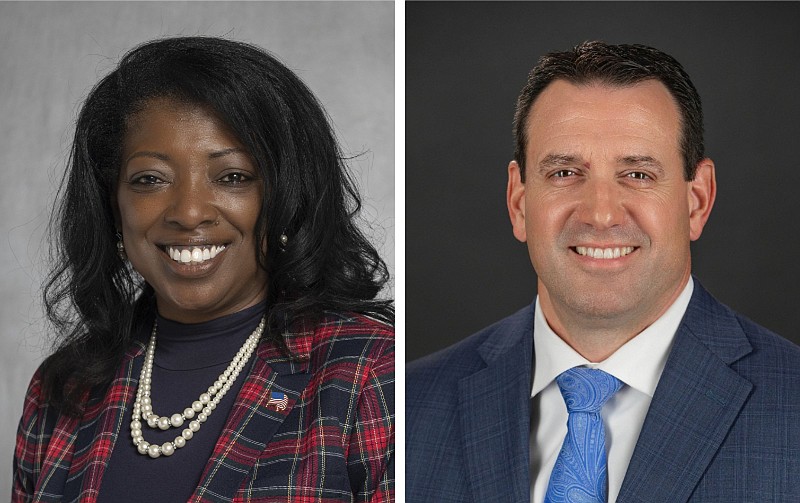 Alicia Walton and Will Jones, both candidates for prosecuting attorney for Arkansas' 6th Judicial District, are shown in this combination photo.

For the first time in more than a quarter-century, voters in Perry and Pulaski counties will not see Larry Jegley's name on the ballot for Sixth Judicial District prosecuting attorney.

The 182-year-old region's longest serving prosecutor, Jegley announced last year that he was retiring at the end of his eighth term and 31 years in the prosecuting attorney's office, 26 of them as the elected official. Since stepping up to replace Mark Stodola -- who later served as Little Rock mayor -- in 1996, Jegley never had an opponent.

His successor, who will be elected in the May 29 nonpartisan primary, will not be able to say the same. Early voting begins Monday for the position that will be decided in a race between longtime defense attorney Alicia "Lisa" Walton, 52, and veteran prosecutor Will Jones, 47, both of North Little Rock. The winner takes office Jan. 1.

Jegley said Friday he is endorsing Jones, a former deputy, to take his place. The 69-year-old prosecutor said he had devoted his career to ensure that the prosecuting attorney's office has lived up to the highest standards of the justice system with the goal of making the office a source of both justice and comfort for the community. Jones, as an attorney, a prosecutor and a leader, is very qualified to build on what he's tried to accomplish, Jegley said.

Acting on behalf of the government, the prosecuting attorney evaluates evidence, generally provided by law enforcement agencies, to levy criminal charges and try cases against individuals accused of crimes of all levels. Prosecutors work in the district courts where misdemeanor cases are heard in Jacksonville, Little Rock, North Little Rock and Sherwood, as well as Perry and Pulaski counties. They also prosecute felony crimes in the circuit courthouse in Pulaski and Perry counties.

Walton, who passed the bar in 2010, said she decided to run after much study convinced her she could reform the office to better serve the public, both effectively and efficiently. The status quo is not enough, Walton said.

"The current criminal justice model is not working, and we need to reform the system so it works for all of us," Walton said. "The model of incarcerating an individual and not addressing the root causes of what brought that person in contact with the system. Those days are over."

Her candidacy has drawn national attention with her endorsements including well-known civil-rights attorney Ben Crump. More information about her campaign can be found on her site, www.aliciawalton.org

She said under her watch the prosecuting attorney would move from being a conviction-focused operation to a system that values more community input, maintains closer ties with crime victims and reforms the cash bail system so offenders who need to stay in jail are kept there while others aren't jailed just because they are poor.

Walton said she will install programs to offer services to intervene in the lives of troubled individuals who break the law without violence, to make sure they get a meaningful opportunity for reform and rehabilitation rather than just imposing punishment through probation or incarceration. Walton said she already has been working toward those goals by helping to create the Pulaski County Veterans Treatment Court and worked to establish the county crisis stabilization unit and the Little Rock District Court's Mental Health Program.

Aside from being the first Black woman to hold the office, Walton, a married mother of three whose husband Rodney Middleton is in the Army National Guard, said she would bring other experiences to the elected prosecutor's position -- those of a Marine and Army National Guard veteran who's run her own business as a private practitioner of law and now works as a public defender.

Walton eschews most labels, saying that she sees herself as a problem-solver. When she saw veterans who'd run afoul of the law not getting the help they needed to overcome their issues and successfully re-enter society, Walton said she worked to establish a special court to help them.

"I sought to find a solution where I saw a system that was failing, and it was failing veterans," she said. "I'm a Marine, and when I see a problem I set out to fix it because that's what [public] service is."

Walton said she'll bring another important perspective to the elected prosecutor's job, one it's never had before -- that of crime victim, a survivor of domestic violence as well as murder.

Her brother, 29-year-old Herman Walton, was found shot to death in the middle of the street on Granite Mountain Circle. His October 1989 killing was the work of a teenage robber trying to steal his car, police said. Walton was the city's 39th murder victim in a year that saw a record 51 homicides. In 2022, Little Rock police report the city has suffered 30 killings as of last week.

Investigators arrested a 17-year-old boy about a week after Walton was killed, but prosecutors dropped the first-degree murder charge against the boy in mid-trial in August 1990 after announcing that two witnesses had lied to jurors. The teen would later go on to serve time in state and federal prisons for drug possession and armed robbery, one of them a bank holdup, court records show.

Speaking further, Walton said she will not unilaterally prosecute children as adults unless they've been screened by the circuit's juvenile judges to decide whether adult prosecution is warranted. She said not enough children accused of crimes get the opportunity at rehabilitation offered by the juvenile justice system. The exception will be for juveniles arrested for homicide, she said.

Will Jones, licensed in 2001, said he had his plans to increase efficiencies in the office's structure, with one being improvement of victim outreach. He said he also does not recognize the agency he once worked for when Walton describes the Pulaski County prosecutors there as conviction-driven with no thought for rehabilitation.

Jones said he believes his campaign shows how he can unite disparate interests, calling on voters to look at his supporter base on his campaign web site, www.willjonesforar.com.

Jones said he's proud to have supporters with a variety of political beliefs helping his campaign as well as substantial backing from defense attorneys.

In his view, prosecutors have a unique role in that they are required to seek justice on behalf of both victims and society, he said. To be effective, Jones said, prosecutors must always pursue a balance that includes fairness for the person being charged who has constitutional rights that must be respected.

"That has to be a paramount concern," he said. "That's an enormous responsibility for a prosecutor, and we take that very seriously."

With every decision the prosecutor makes, the suffering and injury to victims must also be weighed, and it all must be balanced against the needs and expectations of the community, Jones said.

"You have to factor that into every decision you make."

With the ongoing rise in violent crime, coupled with a court system hobbled by the covid pandemic, the next office-holder must be an experienced leader who is proficient in personnel management while also being able to lead in the courtroom, Jones said.

The prosecutor's office has a staff of 54 lawyers with a support staff of 70, with an annual payroll of $4 million and another $3 million in operating costs. The next elected prosecutor must be able to manage that budget and staff to most efficiently serve the need for justice in the community, Jones said.

Jones said he is the only candidate who has management and courtroom experience, describing training new and upcoming prosecutors during 11 years as a deputy for Jegley and now as chief deputy for the Pine Bluff-based 11th West Judicial District.

A father of two, married to North Little Rock District Judge Paula Juels-Jones, Will Jones said he's worked for 20 years "fighting for justice for crime victims" in a fight that's taken him beyond Pulaski County to working in multiple jurisdictions over seven years as a deputy attorney general.

In that role, under both Dustin McDaniel and Leslie Rutledge, Jones managed the Cyber Crimes Unit and oversaw child-exploitation investigations across the state, which gave him the opportunity to see how other elected prosecutors operated. Further, he has been an appointed special assistant U.S. attorney tasked with helping prosecute gun crimes.

Now focused on prosecuting murder cases in Pine Bluff, Jones has spent much of his career seeking justice for children who are victims of rape, abuse and exploitation. Those children have touched his heart, Jones said, describing the opportunity to represent them as a "badge of honor."

According to the latest campaign finance reports from the secretary of state, Walton has received $19,074 in contributions while spending $16,481. Jones shows to have collected $144,745 in contributions with $33,334 in expenditures.