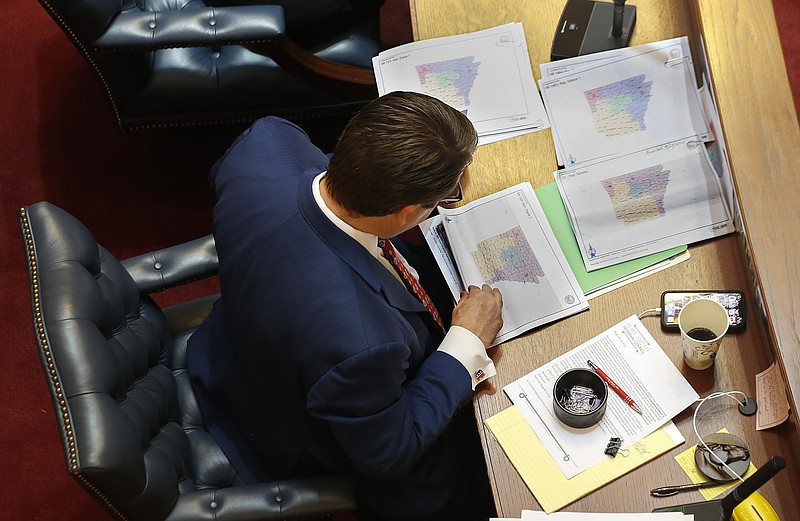 Four pending lawsuits contesting political boundaries in Arkansas are making their way through state and federal courts, but officials say go ahead and vote early in the May 24 elections because they don't expect the courts to order any immediate changes.

Three involve congressional or legislative district boundaries redrawn after the 2020 U.S. census. The fourth concerns nonpartisan judicial districts for the state's Supreme Court and its Court of Appeals.

• Arkansas NAACP v. Arkansas Board of Apportionment. This case is before the U.S. 8th Circuit Court of Appeals in St. Louis. Plaintiffs claim the state diluted Black Arkansans' voting power by reducing the number of state House districts in which those voters make up a majority. The plaintiffs seek more majority-minority districts.

• Jackie Simpson v. Gov. Asa Hutchinson. Filed in federal court in Little Rock and approved for a hearing by a three-judge panel there. No hearing date is set. The state Legislature cut Black voters in eastern and southern Pulaski County out of the 2nd Congressional District. Then the Legislature further split those voters between the 1st Congressional District and the 4th. This deliberately dispersed them to reduce their voting power, plaintiffs claim.

• Christian Ministerial Alliance v. the State of Arkansas. Filed in 2019, the trial in federal court concluded Monday. The verdict is pending. The plaintiffs seek one majority-minority district for electing justices to the state Supreme Court and two such districts for state Court of Appeals judges.

None of these cases should impact the May 24 primary election or the nonpartisan judicial elections held the same day, a spokesman for the secretary of state's office said. Early voting begins today. Ballots to voters currently living overseas, such as U.S. service personnel, have already been sent and counties have begun printing ballots, spokesman Kevin Niehaus said.

Gary Sullivan, legal director of the American Civil Liberties Union of Arkansas and Dustin McDaniel, who served as state attorney general during the last redrawing of state legislative and congressional districts, agreed the primary election was too close for any major changes to be likely.

The ACLU represents the plaintiffs in the 8th Circuit case, which probably will not conclude before the general election Nov. 8, Sullivan said. Any remedy ordered by the court if the plaintiffs prevail in that case will likely take effect for the 2024 election, he said.

Courts in election cases tend to try to prevent problems in the next election rather than reshuffle election results already reached and for sound reasons, he said.

"Say, for example, that people on 3rd and 4th streets shouldn't have voted in a particular election and throw out their votes," McDaniel said in an telephone interview Wednesday. "You've disenfranchised those voters. Their votes didn't count in any election. You can't just assign them somewhere else because you don't know how they would have voted in another district's election for a different candidate.

"You'd be straining trust in the election process at a time when a lot of people have already questioned it," he said.

MAKING IT A FEDERAL CASE

Each state gets a share of the 435 U.S. House seats. Seats are reassigned after each U.S. census, which takes place every 10 years. Census results show Arkansas remained entitled to four U.S. House seats.

The state Legislature decides U.S. House district boundaries and must make them of equal population as close as reasonable. Implied in the U.S. Constitution, the requirement for equal representation was made explicit in U.S. Supreme Court cases.

Splitting Pulaski County removed approximately 23,000 of that county's residents from the 2nd Congressional District, the Simpson lawsuit claims. The vast majority of the people removed from the 2nd District are Black, according to the Simpson suit, which was filed March 7.

"To adjust for the loss of that population of approximately 23,000 persons from the 2nd District, the bills added the whole of Cleburne County to the 2nd District's extreme northern border," the suit points out. "Cleburne County, named for the Confederate General Patrick Cleburne, has only 69 Black residents in a population of 24,711 persons, according to the official 2020 Census."

"The Black vote in Congressional District 2 has, in recent years, become highly influential in congressional elections," Simpson's suit claims. "In the general election for 2nd District congressman in November 2020, Joyce Elliott, a Black educator and state senator from Senate District 31 (constituting a portion of Pulaski County), received 44.6% of the votes to the incumbent congressman [and] banker French Hill's 55.3%," according to the suit.

As a result of redistricting, minorities and their interests on national policies are no longer a significant consideration for the congressman representing the district, according to the lawsuit.

Hutchinson is an attorney who once served as former U.S. attorney for the federal Justice Department.

A federal judge will take note when the state's own chief executive expresses doubt about a measure's constitutionality, said former state Attorney General Steve Clark. Clark, who is now president of the Fayetteville Chamber of Commerce, compared the situation to a 1981 case his office defended. That case involved a state law requiring creation science to be taught in Arkansas schools. Creation science claims that the evolution of life shows evidence of divine guidance. Then-Gov. Frank White said publicly that he did not know if the bill was constitutional or not.

"That puts you way behind in a court case," he said.

The state responded to the Simpson suit with a motion to dismiss. Plaintiffs have until Monday to file a response. No trial date is set.

Defenders of the plan in the Legislature said during debate some county would have to be split to meet the requirement of equal district populations. Pulaski County is the state's largest county and is in central Arkansas. Proponents argued it was better to split one large county than several smaller ones.

Sen. Tom Cotton, R-Ark., was granted permission to file a friend of the court brief in the case.

"By pleading a racial gerrymandering claim based solely on an alleged Republican political advantage, plaintiffs are effectively arguing that any map that is not gerrymandered to benefit Democratic candidates must be unlawful," reads part of the brief submitted April 15.

The Suttlar case, filed March 21, also argues the 2nd District was redrawn to exile a major bloc of Black voters.

"Arkansas is the only state in the country with a Black population above 10% that has never elected a Black representative to Congress," the suit claims. "This is no mistake. Arkansas's congressional map has long been drawn to thwart the ability of Black voters to elect their candidates of choice."

Arkansas has 100 state House seats and 35 state Senate seats. After each U.S. census, the state redraws legislative district boundaries to make sure, as close as reasonable, that every House district has an equal number of people. Likewise, the state draws 35 Senate districts. Those boundaries are drawn by the state Board of Apportionment, which consists of the sitting governor, attorney general and secretary of state.

The Arkansas NAACP sued Dec. 29 in federal court in Little Rock. Arkansas' Black population is 16.5% of the total, census figures show. It is possible, the suit claims, to draw "16 reasonably compact majority-Black districts in which Black voters have a meaningful opportunity to elect candidates of their choice."

Court filings include a map with 16 such districts proposed by the plaintiffs, who are represented by the ACLU. The suit asked the federal court in Little Rock to adopt its map.

U.S. District Judge Lee P. Rudofsky ruled in his Feb. 17 court order dismissing the case the plaintiffs had no standing to sue.

"Today's order simply means that the attorney general of the United States must be the plaintiff in such an enforcement action," he said in the ruling.

Rudofsky did not address the merits, or lack of them, of the case.

A ruling that only the U.S. Justice Department could sue to defend voters' right would be a severe setback for voting rights cases and not just in Arkansas, said Sullivan, a plaintiff's attorney in the case. The U.S. attorney for the eastern district of Arkansas agrees with him, according to case documents.

The U.S. Attorney's Office in Little Rock filed a letter of interest in this case Jan. 28 arguing courts have never denied private citizens the standing to sue over congressional redistricting under the 1965 Voting Rights Act.

The letter quotes the 1969 U.S. Supreme Court case of Allen v. State Board of Elections, in which election boards in Mississippi and Virginia were sued. In that case, the court noted the U.S. attorney general has a limited staff "who may not always be able 'to uncover quickly new regulations and enactments passed at the varying levels of state government.'" The Allen case allowed a private citizen to sue the state election boards of Mississippi and Virginia under the Civil Rights Act regarding voting procedures, but the case did not involve redistricting.

The 12 judges on the Court of Appeals are elected from seven districts, five of which elect two members. They also serve eight-year terms and can run for re-election.

Attorneys for the defense brought John Alford, a political science professor at Rice University, to testify in the trial. Alford testified that voting in Arkansas is more polarized along party lines than racial or ethnic lines. Black voters in Arkansas tend to evenly split their votes between candidates regardless of race in nonpartisan judicial elections, he testified.

Dylan Jacobs, an attorney in the state attorney general's office, argued at trial the relief sought by the plaintiffs is "unprecedented." Jacobs said at-large Supreme Court districts are common among states that elect high court justices and that no state has ever been required to shift from at-large to single-member district elections in those races.