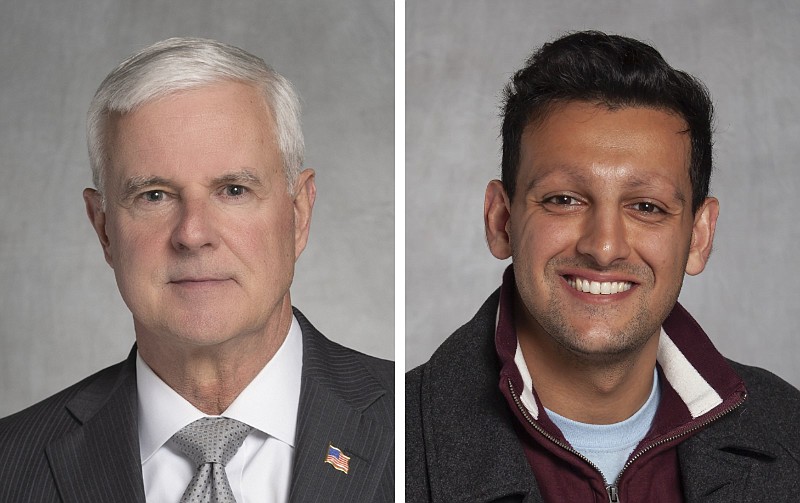 A lot separates U.S. Rep. Steve Womack from Neil Kumar, his challenger in the May 24 Republican primary election for Arkansas' 3rd Congressional District.

Womack, 65, is a former Rogers mayor and retired Arkansas Army National Guard colonel who has served in Congress since 2011.

Kumar, 26, of Bentonville, is a law student who says he's the most persecuted candidate in America because he's the only candidate for national office who "poses a real threat to the Satanic Globalist Cabal."

"Satan's best trick is convincing us he doesn't exist," said Kumar. "So the biggest threat to Satan is someone like me who recognizes his many disguises."

Kumar presents himself as an outsider.

"Denounced by the Arkansas GOP as a 'racist, sexist, bigot'," he wrote on a social media site.

Even his barber banned him, said Kumar, who poses with a military-style rifle in campaign photos.

One thing that separates the candidates is the Jan. 6, 2021, riot at the U.S. Capitol in Washington, D.C.

Womack was against it.

"It was a dark day for the country," he said. "In my heart of hearts, it was the saddest day that I've seen for my beloved constitutional republic in the time that I've been there. That good, God-fearing, red-white-and-blue leaning Americans would think that the answer to an issue they have with an election was to do that on that particular day. And I'm sorry it happened."

"I believe the U.S. Capitol Police, in coordination with the FBI, let a group of God-fearing American patriots into the Capitol in an attempt to frame Trump supporters as terrorists and distract the American public from the real insurrection, which took place on the night of Nov. 3, 2020," said Kumar.

Kumar said Womack no longer represents his constituents. Among other things, Kumar cited Womack voting to certify the 2020 election and voting for the first Jan. 6 commission.

"The fact is, on Dec. 14, that election was over and so we can argue all day long about voter fraud, stolen elections, whatever, but 50 governors and the mayor of the District of Columbia signed those certificates ending that election ..." said Womack. "Even if it's stolen, it's over and we have to move on because probably one of our greatest hallmarks as a nation, as a functioning democracy, is peaceful transfer of power. And that happened on Jan. 20 as it should. But it was kind of ugly before then."

Womack was among 35 Republicans in the House of Representatives who voted to support the original Jan. 6 commission, a bipartisan effort that was later blocked by Senate Republicans.

Womack said for him it was a vote of conscience because he took an oath to the Constitution.

"And my oath to the Constitution trumps everything," he said. "It doesn't make any difference who you are and what your purpose is, if I consider this to be a violation of the oath I took to the Constitution, I can't go there. I refuse to."

Since then, a House select committee has been investigating the Jan. 6 riot at the U.S. Capitol.

Kumar said he is a law student at the University of Arkansas, Fayetteville. He took the most recent year off to campaign.

"I am a grassroots candidate funded entirely by regular Arkansawyers, while my opponent is funded entirely by Walmart and the Walton family, defense contractors like Raytheon, Big Pharma companies like Pfizer, and even foreign lobbyists like [American Israel Public Affairs Committee]," Kumar wrote when answering a questionnaire for the Arkansas Democrat-Gazette.

A review of filings with the Federal Election Commission indicated most of Kumar's listed contributions came from out of state. Out of 53 contributions to the Neil for Arkansas campaign that are listed on the FEC website, 14 came from Arkansas.

When asked about this, Kumar said, "The FEC only requires me to report donor data for contributions over $200, so you don't know where the majority of my donors live."

He then noted the difference between "the small dollars I raise from patriots throughout the Southeast and the entire nation" vs. the millions of dollars Womack raises from corporations, defense contractors and other entities.

During that same time, Womack's campaign raised $840,050. While he did receive money from the entities Kumar mentioned, or their affiliated political action committees, Womack received contributions from many other sources, including individuals in Arkansas.

Besides being a Republican, Kumar said he's also a Christian nationalist who believes we should put God back in the center of American politics.

Immigration is the most important issue, said Kumar.

"The most pressing issue facing my constituents is also the most pressing issue facing America: the Great Replacement. Millions of illegal aliens are pouring across our wide-open Southern Border, with hundreds of thousands of new arrivals every month ..." Kumar wrote in the Democrat-Gazette questionnaire. "If we don't stop this endless flood of immigration now, our nation will be lost. My plan includes a 20-year total immigration moratorium ending both legal and illegal immigration, as well as mass deportations of all illegals, building a wall, ending birthright citizenship, taxing remittances, and denying public services to illegals. A nation without borders is no nation at all."

Womack pointed to his own "strong record on illegal immigration." He said Kumar's proposal would deny highly skilled immigrants into the United States.

"A 20-year moratorium, the fact that it's all immigration is kind of laughable that he would think that a melting pot like America is automatically one day just going to shut down everything," said Womack. "No fresh ideas, no new blood can come into this country. That's just ridiculous to make a statement like that."

When asked where this is taught, Kumar replied, "Find me a school in Arkansas that does not have a lunatic Marxist teacher pushing critical race theory. As anyone who has known a silver-tongued homosexual knows, the anti-white and pro-pedophile activists embedded in our school systems have done their dishonest best to hide anti-white CRT within all manner of other terminologies, slogans and acronyms."

Womack said the most pressing issue facing the country is inflation.

"The escalating cost of living is forcing a number of lifestyle changes with many I represent," Womack wrote when filling out this newspaper's questionnaire. "Policies of the current administration -- Green New Deal climate agenda, huge government subsidies under the guise of covid relief, anti-police rhetoric, open borders, bigger government, higher taxes, and more -- are major contributors to the difficulties facing everyday Americans. We must get back to limited government, responsible spending, regulatory relief and lower taxes. We simply cannot afford the policies of the Biden-Pelosi agenda."

Democrats currently outnumber Republicans in the U.S. House of Representatives. Assuming a new majority in the House after the Nov. 8 general election, Womack said he will work with Republican leadership to bring legislation to the floor that reverses the Biden administration's policies on American energy.

"I will fight to secure our border and stop the flow of illegal immigrants, drugs and human trafficking," Womack wrote in the questionnaire. "I will protect our rights as gun owners. I will defend the unborn and ensure taxpayer dollars are not used for abortion services. I will champion policies that improve the government's budget and appropriations process to eliminate continuing resolutions, omnibus packages, and threats of a government shutdown. I will uphold a strong and secure national defense strategy with the appropriate funding to give America peace through strength. Above all, I will honor my oath to the Constitution."

Womack is the ranking member of the House Appropriations Subcommittee on Financial Services and General Government and chairman of the Board of Visitors of the United States Military Academy at West Point.

The winner of the Republican primary will face two candidates in the Nov. 8 general election: Democrat Lauren Mallett-Hays and Libertarian Michael J. Kalagias.