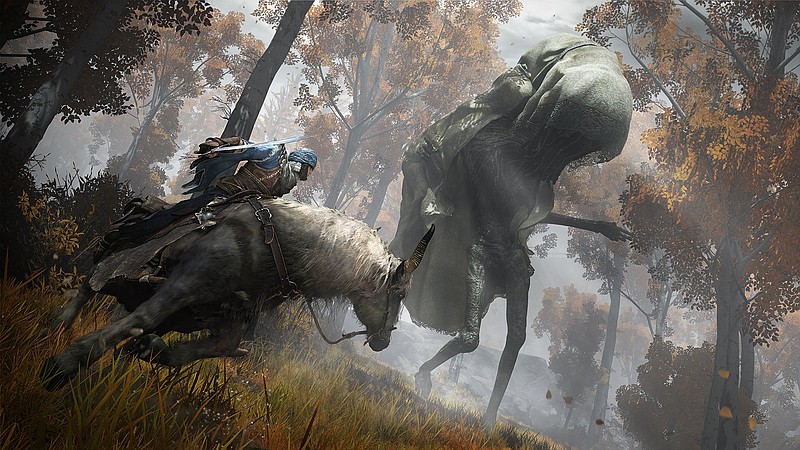 In Elden Ring, as the Tarnished ride or walk the Lands Between to collect runes, they confront bosses and minibosses, such as the huge, hooded Wormface Boss near a Minor Erdtree in Altus Plateau. (FromSoftware)

I don't think it would be a stretch to say that FromSoftware's "Elden Ring" is its magnum opus, and a pinnacle of game development.

The bones have been there for a while, as its game-making craft was honed with "Dark Souls" 1, 2 and 3, "Bloodborne" and "Sekiro," but the action roleplaying game directed by Hidetaka Miyazaki (and in collaboration with "Game of Thrones" author George R.R. Martin) has truly fleshed out what is possible in video games.

If you've heard only a little about this game, it's probably that it's punishingly difficult, and that is true. The level design and boss encounters will delight, but they will also humble you with confidence-destroying experiences.

As with its earlier games, "Elden Ring" is presented in the third-person perspective, but this time in a massive open world, similar to those found in "Skyrim" or Legend of Zelda's "Breath of the Wild," in a place called the Lands Between. The game takes place sometime after the destruction of the titular Elden Ring, its shards scattered and fought over by the corrupted demigod children of Queen Marika the Eternal. The player's goal? Find the shards, put the ring back together and become the Elden Lord.

What sets "Elden Ring" apart from its contemporaries is how it goes against expectations for the genre. You're not collecting a pile of quests to complete; there's no mini-map; exploration areas aren't gated to keep you from exploring beyond your capability; and the game maximizes player agency. Go where you want, fight how you want.

"Elden Ring's" most unique contribution is trust in the player to be able to figure out the secrets, the puzzles, the methods to defeat a boss, and when to know victory is currently impossible and to back away. It is easy to find yourself in an area too difficult for you, both as a player and as a character. You are trusted to figure this out on your own.

[Video not showing up above? Click here to watch » arkansasonline.com/59ring/]

The notoriously difficult bosses are here, too, as well as minibosses that wander the open world map. And again, the game puts its trust in the player to study: Learn attack patterns, spot weaknesses, use the right tools for the job and use the environment as an advantage.

The reliance on player agency starts at character creation with a number of class archetypes -- each with various bonuses and detriments -- available. Players can choose to fight mostly in melee combat, or use ranged attacks or various types of magic. Combat also takes place via stealth and on horseback, and the player can summon spirits to help, as well as nonplayer character allies for certain fights. Also an option is multiplayer, with the ability to have a friend join the game to assist (but which also comes with the downside of enemy players being able to "invade" your game, with a mission to kill you).

The Lands Between feels like a real place, with a real sense of history. The world didn't happen when your character showed up, it was already here and you're just witnessing a glimpse, one moment in time out of many. And it's filled with secrets. Exploration is a treat. You can't travel 30 seconds in any direction without finding something that grabs your attention.

The major set pieces are stunning eye-candy, from an Yggdrasil-like, luminescent tree of epic proportions that spreads golden rays of light across the land, and wide forests blanketed in fog, to Gothic castles that punch the sky.

And there's always more to find. You've explored the land, but now you find an entrance to a sprawling underground lost city. And then you find a cave system beneath that, and then a toxic underground lake where some ancient beast dwells. Exploration has a real thrill when there's no way to predict what's going to be around the next corner.

If you're pursuing the quickest path to the end, bypassing as many side quests and stories as possible, "Elden Ring" will still generally take 50 to 70 hours to complete. For completionists, people who want to find every secret, every nugget of lore? Probably double that.

"Elden Ring" is not a game everyone will love. It is not a "relax and unwind" game, but one where fights are balanced on a knife's edge, where you'll face off against bus-size lobsters, 50-foot-tall trolls, fire-breathing dragons and various, spectral floating jellyfish and almost innumerable, grotesque monstrosities.

Full of mystery, "Elden Ring" is already making a strong case not just for game of the year, but of the decade, and we can only hope to be so blessed as to see another game even better. 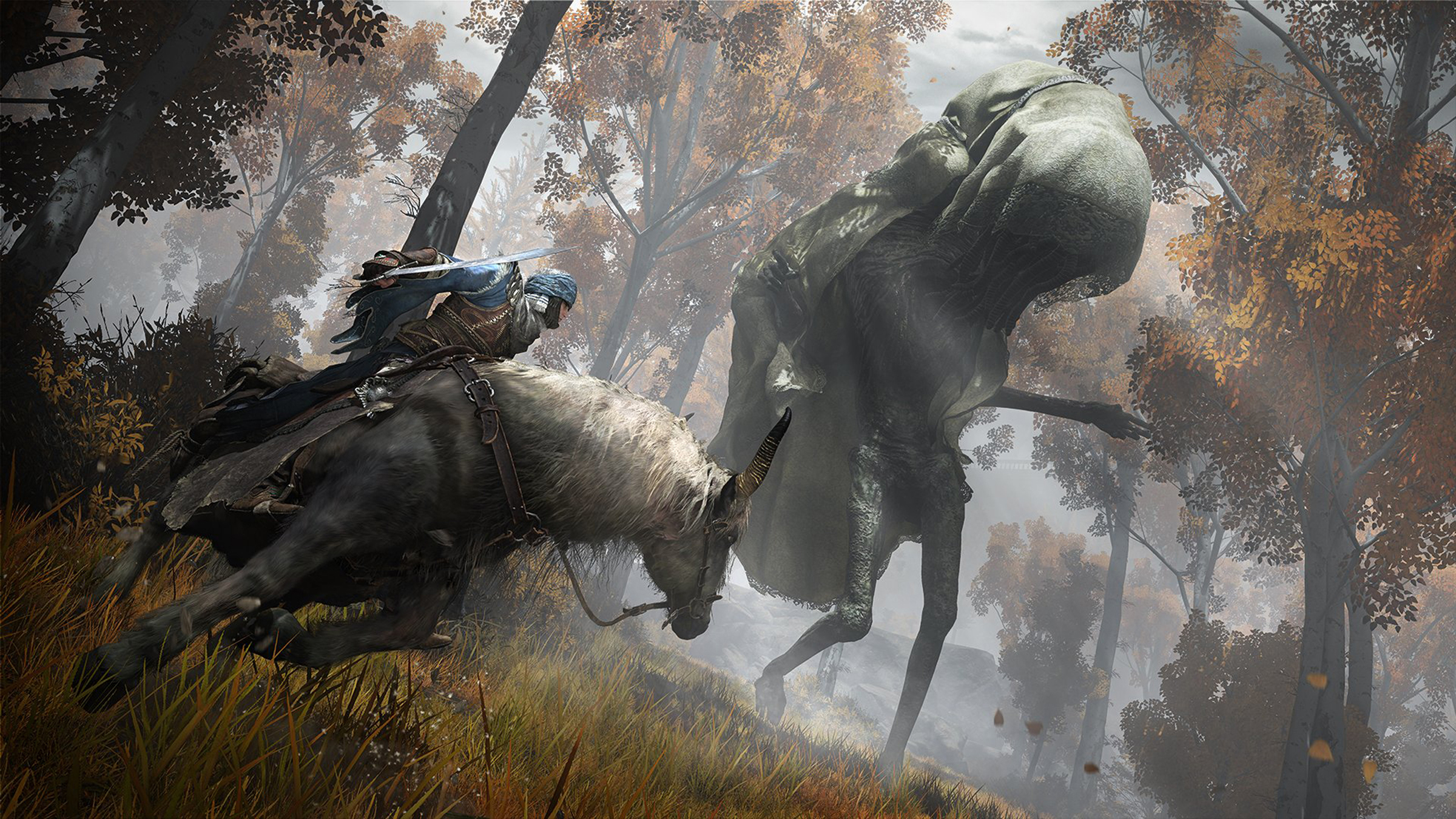 In Elden Ring, as the Tarnished ride or walk the Lands Between to collect runes, they confront bosses and minibosses, such as the huge, hooded Wormface Boss near a Minor Erdtree in Altus Plateau. (FromSoftware)

Print Headline: ‘Elden Ring’ puts its trust in the player