Former Hog Robinson to be an Aggie 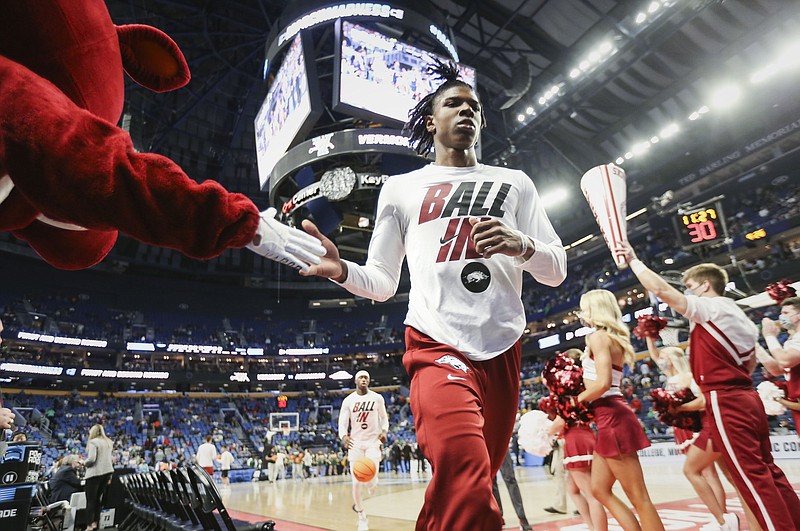 FILE — Arkansas guard Khalen Robinson (2) runs off the court, Thursday, March 17, 2021 before the first round of the 2022 NCAA Division 1 Men's Basketball Championship at KeyBank Center in Buffalo, N.Y. Check out nwaonline.com/220318Daily/ and nwadg.com/photos for a photo gallery. (NWA Democrat-Gazette/Charlie Kaijo)

FAYETTEVILLE -- Khalen "KK" Robinson played the final game of his University of Arkansas basketball career against Texas A&M in the SEC Tournament on March 12.

Now Robinson is going to be an Aggie.

Robinson, a 6-foot guard from Little Rock who entered the transfer portal on April 1, posted on his Twitter account Sunday that he has committed to Texas A&M.

Robinson said he would prefer to comment on his decision to transfer to Texas A&M at a later time when he was reached on Sunday.

The decision for Robinson to transfer wasn't a surprise considering he played 91 total minutes last season, averaging 4.8 in 19 games, including two starts. He averaged 1.5 points with a high of six against the University of Central Arkansas.

When Texas A&M beat Arkansas 82-64 in the SEC Tournament semifinals, Robinson played four minutes off the bench and scored five points. His season high for minutes was 11 against Elon and at Mississippi State.

As an Arkansas freshman, Robinson played in the first 11 games off the bench and averaged 2.6 points and 8.4 rebounds before he was sidelined by a foot injury that required surgery.

"The entire program wishes KK the best at Texas A&M and wants to thank him for all of his contributions to Razorback Basketball," Arkansas Coach Eric Musselman said in a text message. "The last two years KK brought incredible toughness and competitiveness. He's got a bright future ahead."

Robinson is the third Razorback from last season's team to transfer along with Connor Vanover (Oral Roberts University) and Chance Moore (Missouri State).

This is the second consecutive year Texas A&M will add a transfer from Arkansas. After last season Ethan Henderson, a forward from Little Rock Parkview, transferred to Texas A&M for his senior season.

Robinson led Bryant to the Arkansas Class 6A championship game as a junior when he averaged 18.0 points, 4.5 rebounds and 3.0 assists. As a senior he played at Oak Hill (Va.) Academy, where he averaged 10.7 points and 7.5 assists for a 37-3 team.

Texas A&M was among Robinson's scholarship offers as a high school player along with Arkansas, Kansas, Florida, Illinois, Oklahoma, TCU and Vanderbilt.

Print Headline: Former Hog Robinson to be an Aggie