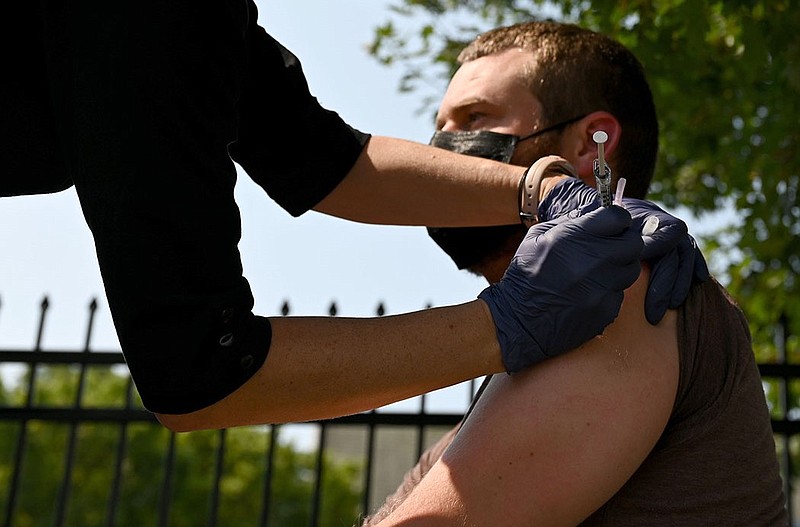 Cole Downing receives the Johnson & Johnson vaccine during a drive through vaccine clinic in downtown Little Rock on Saturday, Aug. 7, 2021. The clinic was hosted by the Junior League of Little Rock, in partnership with the Arkansas Department of Health and ExpressRx. (Arkansas Democrat-Gazette/Stephen Swofford)

Arkansas’ count of coronavirus cases rose Tuesday by 259, the second-largest daily increase since March, while the number of people hospitalized in the state with the virus rose for the second day in a row.

The state’s death toll from the virus, as tracked by the Department of Health, remained at 11,409, with no new deaths reported on Tuesday.

Continuing an uptick that began a few days after Easter, the increase in cases on Tuesday was more than four times as large as the one a day earlier and almost twice the size of the one the previous Tuesday.

It was the biggest one-day jump since Thursday, when the count rose by 279.

After dipping slightly on Monday, the average daily increase in the state's case count over a rolling seven-day period rose to 194, its highest level since the week ending March 28.

With new cases outnumbering recoveries, the number of cases in the state that were considered active grew by 92, to 2,056.

The total as of Tuesday was still down from a recent high of 2,062 cases that were active as of Sunday, but it was up by more than 500 compared to the total a week earlier.

The number of covid-19 patients in the state's hospitals rose by five, to 64, the largest number since April 13.

After falling by one a day earlier, the number of the state's virus patients who were on ventilators rose back up by one, to 12.

Growing for the second day in a row, the number who were in intensive care rose by four, to 23.

Excluding Jan. 29 and Jan. 30, when the state didn't release numbers as it switched to a new data system, Tuesday was the seventh day this year that the Health Department didn't report a change in the state's covid-19 death toll.

The average number of deaths reported each day over a rolling seven-day period remained at about 2, which is as low its gotten this year and just above the low of one a day it reached last year, in June 2021.

CORRECTION: Tuesday's increase was the second biggest one-day jump since March 22. A previous version of this story misstated this piece of information.