New covid cases up by 62 in Arkansas; hospitalizations rise by 4 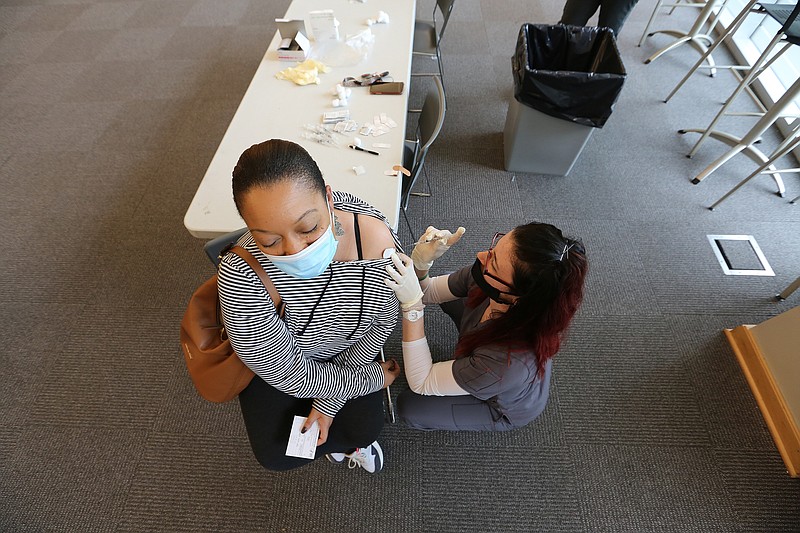 Mia Hampton gets her first dose of the Pfizer vaccine from Jami De La Cruz, a senior nursing student at UALR, during UALR's vaccine clinic put on by Don's Pharmacy on Wednesday, April 28, 2021, at the Jack Stephens Center in Little Rock. (Arkansas Democrat-Gazette/Thomas Metthe)

Arkansas' count of coronavirus cases rose Monday by 62 -- the first daily increase in six days that was smaller than the one a week earlier.

After falling by four a day earlier, the reported number of covid-19 patients in the state's hospitals rose back up by the same number, to 59.

The state's death toll from the virus, as tracked by the Arkansas Department of Health, rose by one, to 11,409.

The increase in cases on Monday was half the size of the one on Sunday and smaller by five than the rise the previous Monday.

Due to slowdowns in testing and reporting over the weekend that tend to lead to smaller new case numbers on Sundays and Mondays, State Epidemiologist Mike Cima said it was hard to read much into the new case number.

While he hopes for a reversal of the uptick in new cases that began a few days after Easter, he said he doubts that will happen this week.

"I think the preponderance of data that we have is pointing toward an upward trend," he said.

He said Health Department officials are keeping an eye on virus-related developments in other parts of the country and around the world.

In some northeastern states, he said the virus' spread appears to be accelerating, although not to the extent it did during the surge caused by the omicron variant this past winter or the one caused by the delta variant last summer.

"Even in these places that have a sharper increase in activity, their hospitalizations, while they may be changing gradually, are not doing so at such a rate that they are putting undue stress on the hospital system."

He said the Arkansas death reported Monday happened within the past month.

After rising the previous five days, the average daily increase in the Arkansas' case count over a rolling seven-day period fell slightly on Monday, to 176, which was still up from an average of 135 a day the previous week and more than double the low point it reached in April.

With recoveries outnumbering new cases, the number of cases in the state that were considered active, which topped 2,000 on Sunday for the first time since March, fell Monday by 98, to 1,964.

The reported number of the state's virus patients who were on ventilators fell by one, to 11, after not changing the previous three days.

The number reported to be in intensive care, which didn't change Sunday, rose Monday by one, to 19.

Pulaski County had the most new cases, 18, on Monday, followed by Washington County with six and Benton and Johnson counties, which each had five.

The Health Department's tally of vaccine doses that had been administered rose by 122 -- the smallest daily increase since the department started regularly releasing daily vaccination numbers in January 2021.

The count of people receiving the vaccine for the first time rose by 33, which was also a record low.

After rising slightly a day earlier, the average number of doses administered each day over a rolling seven-day period fell to 1,214, which was down from more than 2,000 a day the previous week.

The average for first doses fell to 264.

According to the U.S. Centers for Disease Control and Prevention, 66.8% of Arkansans had received at least one dose as of Monday, and 54.5% were fully vaccinated.

Of those who were fully vaccinated, 39.8% had received a booster dose.

Among the states and District of Columbia, Arkansas ranked 37th in the percentage of its residents who had received at least one dose.

In the percentage who were fully vaccinated, it was roughly tied with Idaho for 46th, ahead of Louisiana, Mississippi, Wyoming and Alabama.

Nationally, 77.8% of people had received at least one dose, and 66.3% were fully vaccinated.

Of the fully vaccinated population nationally, 46% had received a booster dose.