Clues from the rock revealed in geology hike 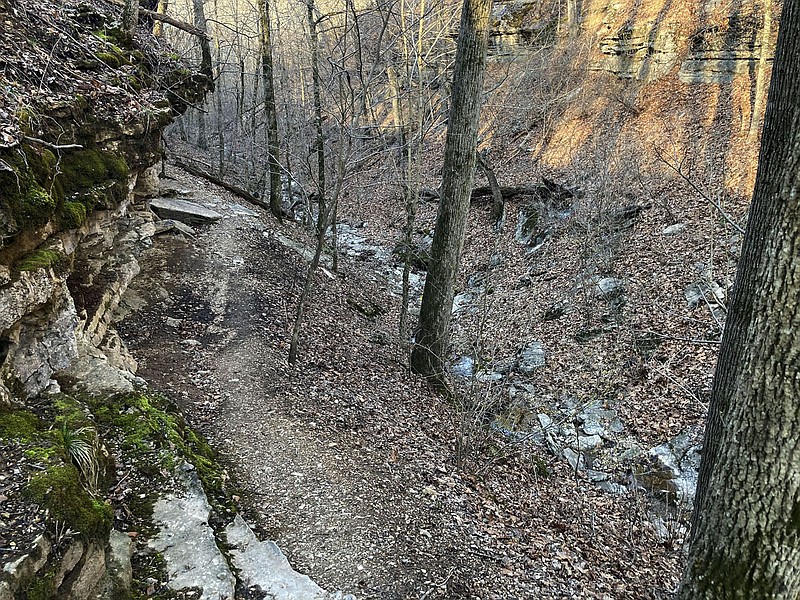 A hike around the lovely Shaddox Hollow Trail at Hobbs State Park-Conservation Area leads to forest, streams and rock. Lots and lots of rock.

So much rock that a self-guided geology tour now lets hikers find out what kind of rock they're viewing along different parts of trail.

The 1.5-mile Shaddox Hollow Trail is a loop laid out on high ridge tops and low ground along a couple of streams. Hikers see different plants and wildflowers up high than they find along the lower elevations. Same with the types of rock.

The self-guided geology hike features six numbered signs along the loop that correspond to the stops on a laminated information sheet at the trailhead and parking area. The sheet is located in the kiosk where visitors sign in and out when they hike. Take the sheet with you along the trail and return it to the kiosk at the end of your hike. There's only one sheet.

With sheet in hand, hike to the left to start the geology tour.

A map on the sheet shows the different rock formations seen on the trail. Different colors of rock distinguish one type from another. Hikers see chert, limestone, shale, sandstone and dolostone all packed into a 1.5-mile hike.

Not far from the trailhead at stop No. 1, hikers are walking among the youngest rock variety. Light gray chert fragments are scattered about the trail. This chert formation is about 150 feet thick, reads the information sheet.

Bluffs at stop No. 2 are at a lower elevation and are made up of St. Joe limestone. Look close and hikers may see tiny fossils in the rock. They're the fossilized remains of tiny marine animals from when the area was covered with sea water. Fragile shale rock is seen where the trail follows a creek that flows into Beaver Lake.

Smooth breaks, like wide cracks, are seen along some of the limestone bluffs. These formed when slightly acidic groundwater flowed through the crack causing the rock to dissolve away, so the tour sheet states.

Back on high ground near the end of the hike, you're back on the chert formation that's close to the trailhead and parking.

Taking this self-guided tour would be a delight for any rock hound or geology buff. Talk about a great activity for the youngsters. What a better outing than geology hike on a trail that has creeks, bluff shelters and the Beaver Lake shoreline for kids to explore.

The trailhead and parking are located one mile north of the Arkansas 12 and Arkansas 303 junction at Hobbs State Park 10 miles east of Rogers. Trail difficulty is in the lungs and legs of the hiking-stick holder, but most would consider it moderate.

The geology tour makes good use of one thing we've got plenty of in our little corner of the Ozarks -- rock. Lots of rock.

Print Headline: Clues from the rock revealed in geology hike