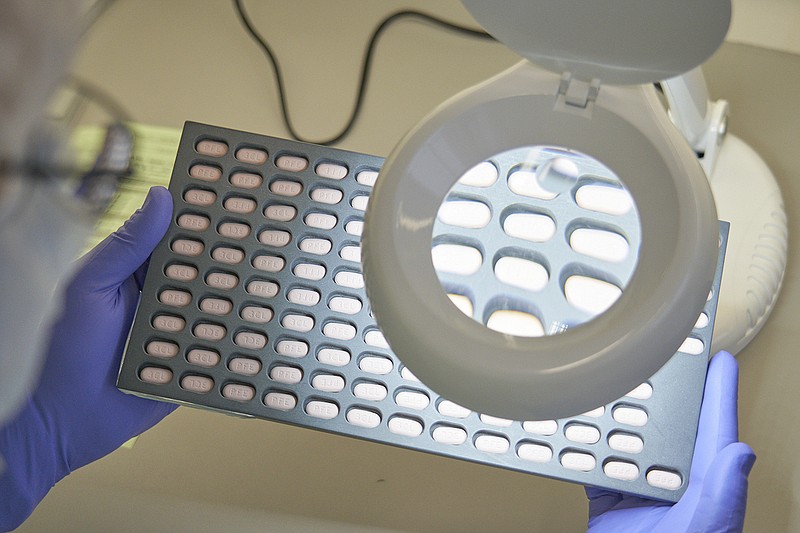 FILE - In this photo provided by Pfizer, a lab technician visually inspects COVID-19 Paxlovid tablet samples in Freiburg, Germany in December 2021. As more doctors prescribe Pfizer's powerful COVID-19 pill, new questions are emerging about its performance, including why a small number of patients appear to relapse after taking the drug. (Pfizer via AP, File)

WASHINGTON -- As more doctors prescribe Pfizer's covid-19 pill, new questions are emerging about its performance, including why a small number of patients appear to relapse after taking the drug.

Paxlovid has become the go-to option against covid-19 because of its at-home convenience and impressive results in heading off severe disease.

The U.S. government has spent more than $10 billion to purchase enough pills to treat 20 million people. But experts say there is still much to be learned about the drug, which was authorized in December for adults at high risk of severe covid-19 based on a study in which 1,000 adults received the medication.

Doctors have started reporting rare cases of patients whose symptoms return several days after completing Paxlovid's five-day regimen of pills. That's prompted questions about whether those patients are still contagious and should receive a second course of Paxlovid.

Last week, the Food and Drug Administration advised against a second round because there's little risk of severe disease or hospitalization among patients who relapse.

Dr. Michael Charness reported last month on a 71-year-old vaccinated patient who saw his symptoms subside and return again, along with a spike in virus levels nine days into his illness.

Charness says Paxlovid remains a highly effective drug, but he wonders if it might be less potent against the current omicron variant. The $500 drug treatment was tested and OK'd based on its performance against the delta version of the coronavirus.

"The ability to clear the virus after it's suppressed may be different from omicron to delta, especially for vaccinated people," said Charness, who works for Boston's VA health system.

Could some people just be susceptible to a relapse? Both the FDA and Pfizer point out that 1% to 2% of people in Pfizer's original study saw their virus levels rebound after 10 days. The rate was about the same among people taking the drug or dummy pills, "so it is unclear at this point that this is related to drug treatment," the FDA stated.

Some experts point to another possibility: The Paxlovid dose isn't strong enough to fully suppress the virus. Andy Pekosz of Johns Hopkins University worries that could spur mutations that are resistant to the drug.

"We should really make sure we're dosing Paxlovid appropriately because I would hate to lose it right now," said Pekosz, a virologist. "This is one of the essential tools we have to help us turn the corner on the pandemic."

Pfizer tested Paxlovid in the highest-risk patients: unvaccinated adults with no prior covid-19 infection and other health problems, such as heart disease and diabetes.

The drug reduced their risk of hospitalization and death from 7% to 1%. But that doesn't reflect the vast majority of Americans today, where 89% of adults have had at least one shot. Roughly 60% of Americans have been infected with the virus at some point.

"That's the population I care about in 2022 because that's who we're seeing -- vaccinated people with covid -- so do they benefit?" asked Dr. David Boulware, a University of Minnesota researcher and physician.

There's no clear answer yet for vaccinated Americans, who already have a hospitalization rate far below 1%.

That may come from a large, ongoing Pfizer study that includes high-risk vaccinated people. No results have been published; the study is expected to wrap up in the fall.

Pfizer said last year that initial results showed Paxlovid failed to meet the study's goals of significantly resolving symptoms and reducing hospitalizations. It recently stopped enrolling anyone who's received a vaccination or booster in the past year, a change Boulware says suggests those patients aren't benefiting.

At a minimum, the preliminary data should be released to federal officials, Boulware said. "If the U.S. government is spending billions of dollars on this medicine, what's the obligation to release that data so that they can formulate a good policy?"

Pfizer recently reported that proactively giving Paxlovid to family members of people infected with covid-19 didn't significantly reduces their chances of catching it. But that's not the end of the story. Pfizer is studying several other potential benefits of early use, including whether Paxlovid reduces the length and severity of covid-19 among households.

"It's a high bar to protect against infection but I'd love to see data on how Paxlovid did against severe disease because it may be more effective there," Pekosz said.

California's covid-19 death toll is on the cusp of 90,000, a tally that comes as the U.S. is nearing its own milestone of 1 million deaths.

As of Friday, California had reported 89,851 cumulative deaths since the start of the pandemic, up 269 from the previous week. At this pace, the state is likely to surpass 90,000 covid-19 fatalities this week.

No state has suffered more total pandemic-related deaths than California. However, on a per capita basis, California has the 11th-lowest cumulative covid-19 death rate -- with 229.5 deaths for every 100,000 residents, according to data compiled by the Los Angeles Times.

California, however, has one of the nation's better vaccination rates -- with 72% of residents of all ages having completed their primary vaccination series. In Arizona, 62% of residents have done likewise, according to data from the CDC.

Of vaccinated adults who have completed their primary vaccination series, 56% in California have received their first booster shot, while 45% have done so in Arizona.

According to the most recent data from the California Department of Public Health, unvaccinated residents remain roughly nine times more likely to die from covid-19 than those who have been fully vaccinated and boosted.

The "surge of infections" seen in the Northeast has not resulted in a big spike in deaths "because the population is so well vaccinated and boosted. That's not true for the whole country," Dr. Ashish Jha, the White House covid-19 task force coordinator, said on ABC's "This Week."

While vaccinations and booster shots dramatically reduce risk, they don't eliminate it, including lasting effects such as long covid and higher risk among covid-19 survivors for heart disease and diabetes. Officials and experts say it's also prudent to take sensible measures to reduce infection risks, such as wearing masks in indoor public settings.

Information for this article was contributed by Matthew Perrone of The Associated Press and by Rong-Gong Lin II and Luke Money of the Los Angeles Times (TNS).